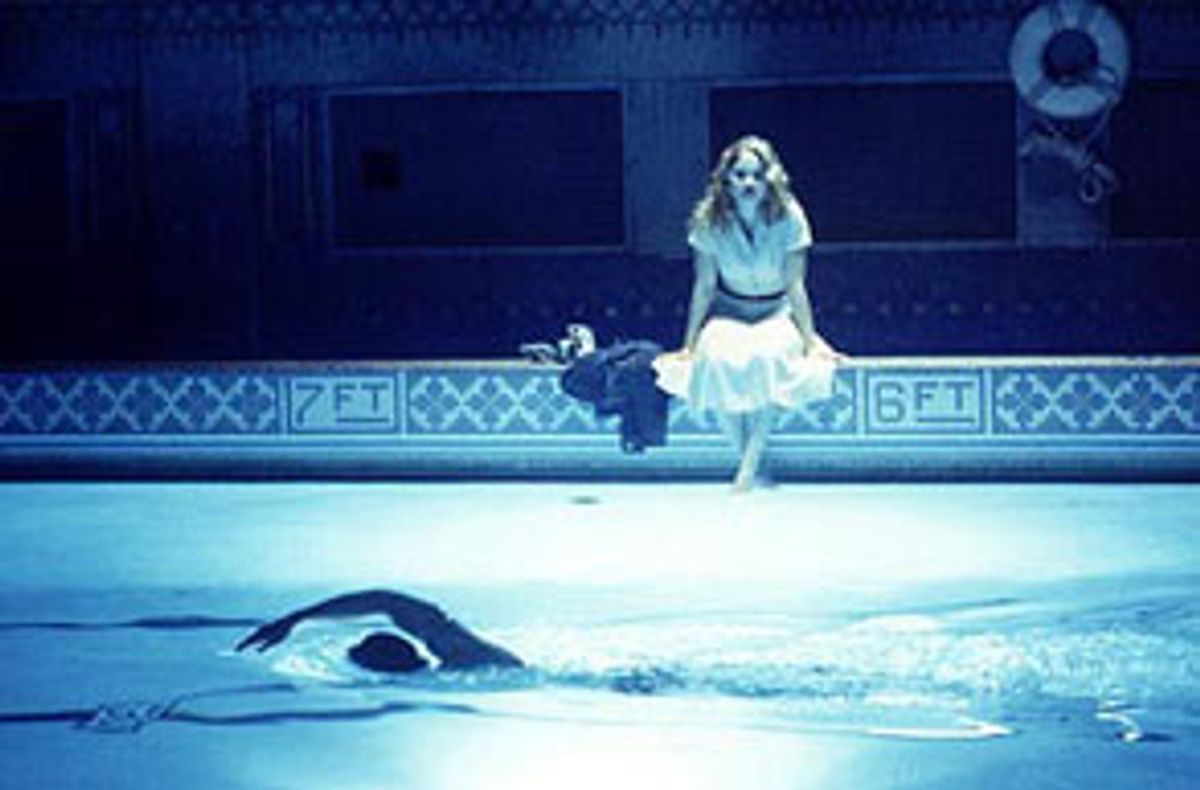 The first "Fatal Attraction" was vile enough. Do we really need the Tiger Beat version? "Swimfan" is such a blatant imitation of Adrian Lyne's Reaganite thriller that the only thing you can be grateful for is that it's far too clumsy to get people arguing about it or taking it seriously.

It is, however, just as misogynist. The patsy here is Ben (Jesse Bradford of "King of the Hill" and "Bring It On"), a champion high school swimmer and former juvenile delinquent (drugs, thievery, a stint in juvie). And the whore of Babylon is Madison (Erika Christensen, who played Michael Douglas' addict daughter in "Traffic"). She's the new girl in school who in short order seduces Ben and starts making his life a living hell.

One of the things that was so poisonous about "Fatal Attraction" was that it was slyly designed to appeal to both male and female gripes. Women could read it as if it were about the sexual callousness of men, and men could read it as their worst nightmares of clinging women. (Though by the time Glenn Close's Alex cooked up that little girl's bunny and sent good wife Anne Archer to the hospital, you'd have to be a fool to think the movie was on her side in any way.)

There'll be no debate about who's right in "Swimfan," since it's abundantly clear that Madison is wacko from jump street. She's so obviously loony, so clearly setting Ben up that you wonder how he can be so dumb not to notice it. But Ben's good, patient girlfriend (the drippy Shiri Appleby) is such a drag that there's no particular suspense in waiting to find out if she learns the truth about her guy and Madison.

The movie flirts briefly with trying to make Ben look callous for treating his one-time fling with Madison as the casual sex it is. But the message here is the same as in "Fatal Attraction": Women are such fragile little things on the surface and such shrews underneath that once you get your willie in them they'll get their claws in you. It's such a primitive view of women that to call it Victorian is to give it credit for being more modern than it is. "Swimfan" presents a world where it's unthinkable that any woman could indulge in sex for pleasure.

It's a pity that the filmmakers decided to make Madison a nut case instead of a bad girl trashing Ben's life for the hell of it. Bradford is so dull in the role (something I wouldn't have said about any of his previous performances) that you almost want to see him get it. (The reason you root for Sharon Stone instead of Michael Douglas in "Basic Instinct" is that she's got it over him in looks, brains, wit and style.) And Christensen, with her apple cheeks, sultry glances and dirty little grin, has the look of a demon slut plotting to let all hell break loose. It's a drag that she plays the role so narcotized and that her line readings are so flat. She never gets to live up to the chaotic potential promised by her flirty little curls and that wicked smile.

If there's any way that "Swimfan" could have worked, it might have been as a horror-comedy about an inexperienced high-school boy who's certain that he and his girlfriend are going to be together forever, and whose expectations are upset by the temptress in his path. In such a film, you'd make Ben a deserving dupe and put us on Madison's side. But "Swimfan" is far too conventional for that.

The script (or what passes for it) by Charles Bohl and Phillip Schneider is so obvious that you can begin ticking off the ways in which Madison is going to wreak havoc. Ben works dispensing medicine in a hospital? Uh-oh. He has a police record? I'm way ahead of you. The movie isn't so obvious, though, that the screenwriters have figured out explanations for how she pulls off some of her devilry. And there's no reason why, in the movie's downbeat final sequence, Ben is still paying the price for things that were clearly not his fault. Pretty much the only way this movie outfoxed me was that it doesn't wind up making kibbles and bits out of the happy dog you see in the opening scenes. That's fitting, because "Swimfan" can remind you why it's often easier to like animals than people.