The courts and even some of his allies have turned against John Ashcroft and his attack on civil rights -- and he has only his own bungling and overreaching to blame. 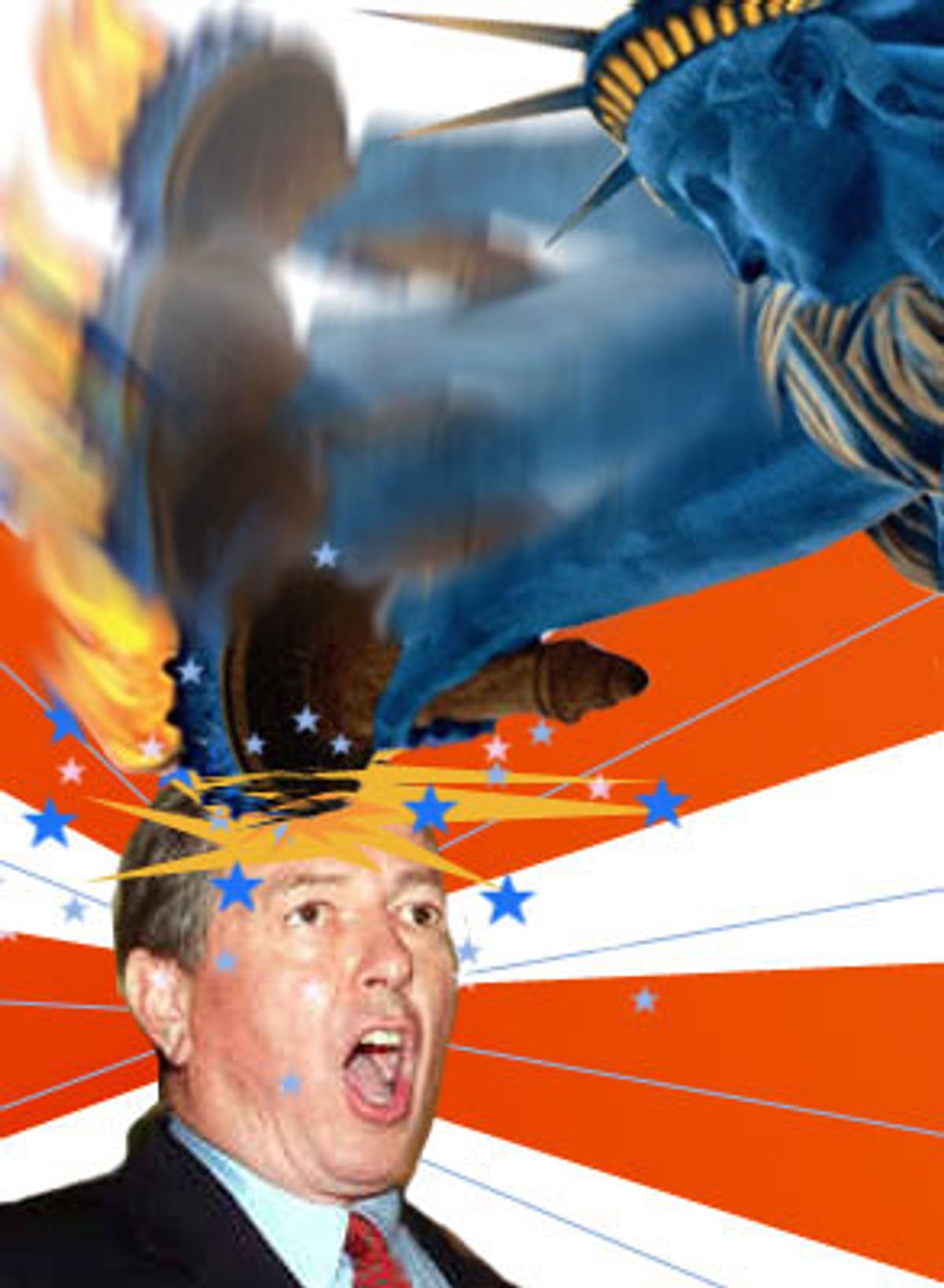 On a day of harrowing grief for many, and fearful, angry memory for many more, it would be reassuring to turn with confidence to the nation's top law-enforcement official. Coming from anyone else, Attorney General John Ashcroft's announcement Tuesday of "specific intelligence" on al-Qaida threats overseas and a high alert for terrorist attacks would have seemed simple prudence.

Instead, a year after the Sept. 11 attacks, can anyone say with confidence whether Ashcroft was speaking of a serious new threat, or exploiting the anniversary to restore his credibility? There is every reason to think that al-Qaida's adherents would take this anniversary as seriously as the group's victims in New York, Washington and elsewhere. But when Ashcroft is the messenger, we just can't tell any more. Any honest accounting on this day -- when the memory of shock mingles with fear for the future -- includes facing the failure of Ashcroft's security policies, which are unraveling so fast that you need a scorecard to keep up.

In the weeks immediately after Sept. 11, Ashcroft's steely glint and Walter Winchell delivery suggested that he would be what Al Pacino in "The Godfather" calls a "wartime consigliere." Under his command, the Justice Department unleashed the most aggressive rollback of civil liberties since the early Cold War. "We're likely to experience more restrictions on our personal freedom than has ever been the case in our country," went one particularly grim assessment. The source was not the American Civil Liberties Union, but U.S. Supreme Court Justice Sandra Day O'Connor, speaking with law students after an emotional visit to the World Trade Center. The government, she warned, might well "rely more on international rules of war than on our cherished constitutional standards for criminal prosecutions in responding to threats to our national security."

To be sure, nothing in the past 12 months equaled the breadth of the McCarthy-era purge, which extended from teachers to screenwriters to government bureaucrats. Instead, Ashcroft's domestic war has been narrowcast, deliberately aimed at issues and constituencies presumed to be of little interest to the general public. Over 1,200 immigrants have been secretly jailed. The Freedom of Information Act has been upended. Secret wiretaps and break-ins for loosely-defined national security cases have been unleashed. The sheer number of individuals secretly jailed or interrogated or deported dwarfs anything in the McCarthy era -- an ironic outcome for year spent in defense of democracy.

Yet a year on the Bush administration's domestic anti-terrorism agenda has in significant ways stalled -- and Ashcroft himself is the reason. Tuesday's anxiety-provoking warnings were delivered by the same attorney general who in June called an unplanned televised press conference from Moscow to announce the disruption of "an unfolding terrorist plot" with the arrest of former Chicago gangbanger Jose Padilla -- a characterization of a small-fry al-Qaida wannabe swiftly torpedoed by an embarrassed White House and FBI. It's the same attorney general who infuriated top Bush officials by covering up the FBI's bungling of pre-Sept. 11 intelligence. It's the same attorney general who became an overnight joke for enlisting the cable guy in his Operation TIPS program.

The point is not whether those al-Qaida threats announced Tuesday are substantial -- but that with Ashcroft, it's impossible to know. And that's an immense problem for a public trying to sort fact from paranoia, genuine security from presidential power grab.

Over the past 12 months, Ashcroft has made a science of high-profile threat reports, disguising the fact that his Justice Department has made little progress in identifying or stopping al-Qaida activity. Even most of the intelligence leading to Tuesday's press conference came from European police departments or from al-Qaida members apprehended abroad, and a draft United Nations report recently found little evidence that U.S. efforts to halt al-Qaida financing have had much impact.

And with the courts, the Ashcroft Justice Department's credibility is even lower than with the public. Consider the top-secret Foreign Intelligence Surveillance Court -- not exactly a hotbed of liberal sentimentality. Meeting in a guarded, locked room on the highest floor of the Justice Department, this is a court which in 25 years has never met a wiretap it didn't like. Its judges routinely consider the most sensitive national security questions and have signed off on over 10,000 warrants.

So when this secret court publicly kicked John Ashcroft in the teeth in a decision released last month, it was clear something was going on. The court was set up in the aftermath of Watergate and the revelations of FBI abuses in the 1960s and '70s, to make sure that the kind of raw intelligence needed for foreign intelligence would not be abused in criminal investigations or politics. In fact, the court has not once rejected a national security wiretap application and has, case by case, allowed foreign-surveillance information to be shared with prosecutors.

But when the Bush administration asserted that the USA PATRIOT Act allows a wholesale blurring of the line, with criminal investigators directing "national security" investigations, the judges went ballistic -- revealing 75 recent cases in which FBI agents "misled" the court, "a troubling number of inaccurate FBI affidavits" and repeated "violation of the Court's orders." The judges' point: Ashcroft and the FBI are not to be trusted with new power when they have abused the power they already had. Finally, the court concluded, the post-USA PATRIOT policies proposed by Bush "are not reasonably designed" to protect the privacy of law-abiding citizens.

Ashcroft spokeswoman Barbara Comstock made much of the fact that these documented abuses happened on Bill Clinton's watch, but that is precisely the judges' point: The abuse of power transcends particular administrations. So ready is the FBI to lie in order to stretch the limits of legal surveillance that the court now refuses to accept testimony from the FBI agent in charge of monitoring Hamas.

Blunt as that rebuke by the surveillance court was, it was a love letter compared to the reception the administration's secret deportation hearings received just a few days later, when another unanimous panel of federal judges -- this an appeals court in Cincinnati -- slammed the Justice Department's secret deportation hearings. "Democracies die behind closed doors," wrote Judge Damon Keith for the U.S. Court of Appeals for the 6th Circuit.

Last year, the INS began deportation hearings against Rabih Haddad, head of a Muslim charity whose assets were frozen after Sept. 11. Ashcroft had asserted the unilateral right to close Haddad's deportation hearings to press and public -- an assertion challenged by Detroit newspapers and U.S. Rep. John Conyers, D-Mich.

The ruling by the 6th Circuit panel could not have been more unambiguous, with the judges' own sense of urgency and outrage clear from the speed with which the ruling was issued -- just three weeks after argument. "The executive branch seeks to uproot people's lives, outside the public eye and behind a closed door," wrote Judge Keith, who was appointed to the appellate court by Democratic President Jimmy Carter. But "when government begins closing doors, it selectively controls information that rightly belongs to the people. Selective information is misinformation."

What's going on is that Ashcroft's entire post-attack legal strategy, a strategy built on broad domestic surveillance and broader secrecy, is collapsing of its own extremity. It is no exaggeration to say that the nation's federal judges -- many of them appointed by presidents Reagan and Bush I -- are now in open rebellion at the measures embraced by the current Bush administration, measures which these judges perceive as a naked power-grab by the executive branch.

Both the surveillance and immigration rulings make it clear that the Bush administration's post-Sept. 11 policies are not just assaults on starry-eyed civil libertarianism -- they are undermining public safety. It is harder to fight terrorism when judges cannot believe the Justice Department and FBI, when police agencies can not develop trusting relations in immigrant communities because of fear of deportation or secret charges.

It's hard to avoid the conclusion that, far from being a "wartime consigliere," Ashcroft has turned out a colossal failure even on the administration's own terms, leading the White House down a succession of blind alleys. Secret military tribunals, secret deportations and secret wiretap expansion have all turned into highly publicized failures. Congress, which last fall rolled over for the USA PATRIOT Act, is finally beginning to ask questions. The proposed Homeland Security department is frozen in the U.S. Senate, and in the House, Wisconsin Congressman James Sensenbrenner, the conservative, law-and-order chair of the House Judiciary Committee, says he is ready to "start blowing a fuse" over the administration's addiction to secrecy and obsession with restoring the imperial executive.

There is ample evidence that Ashcroft has lost his White House support; recent news reports promoting the anti-terrorism labors of Solicitor General Ted Olsen suggest the stage is already being set for a successor. Religious conservatives, once Ashcroft's effective claque, now bridle at his plans to let the FBI spy on religious communities and follow their financial trails. Politically, Ashcroft is a man without a country -- a liability to the Bush administration, an irritation to Congress and an embarrassment to the conservative constituencies which sponsored him.

It's clear that in the weeks and months after Sept. 11, Ashcroft and the Bush administration repeatedly misread the tolerance of today's courts and public. In the same New York talk in which she prophesied new restrictions, Justice O'Connor -- the conservative Reagan appointee -- issued a pointed warning, unheeded at the time, of the need to "maintain a fair and just society with a strong rule of law at a time when many are more concerned with safety and a measure of vengeance." A year after al-Qaida's attacks, the honeymoon with Ashcroft's vision of security is over.