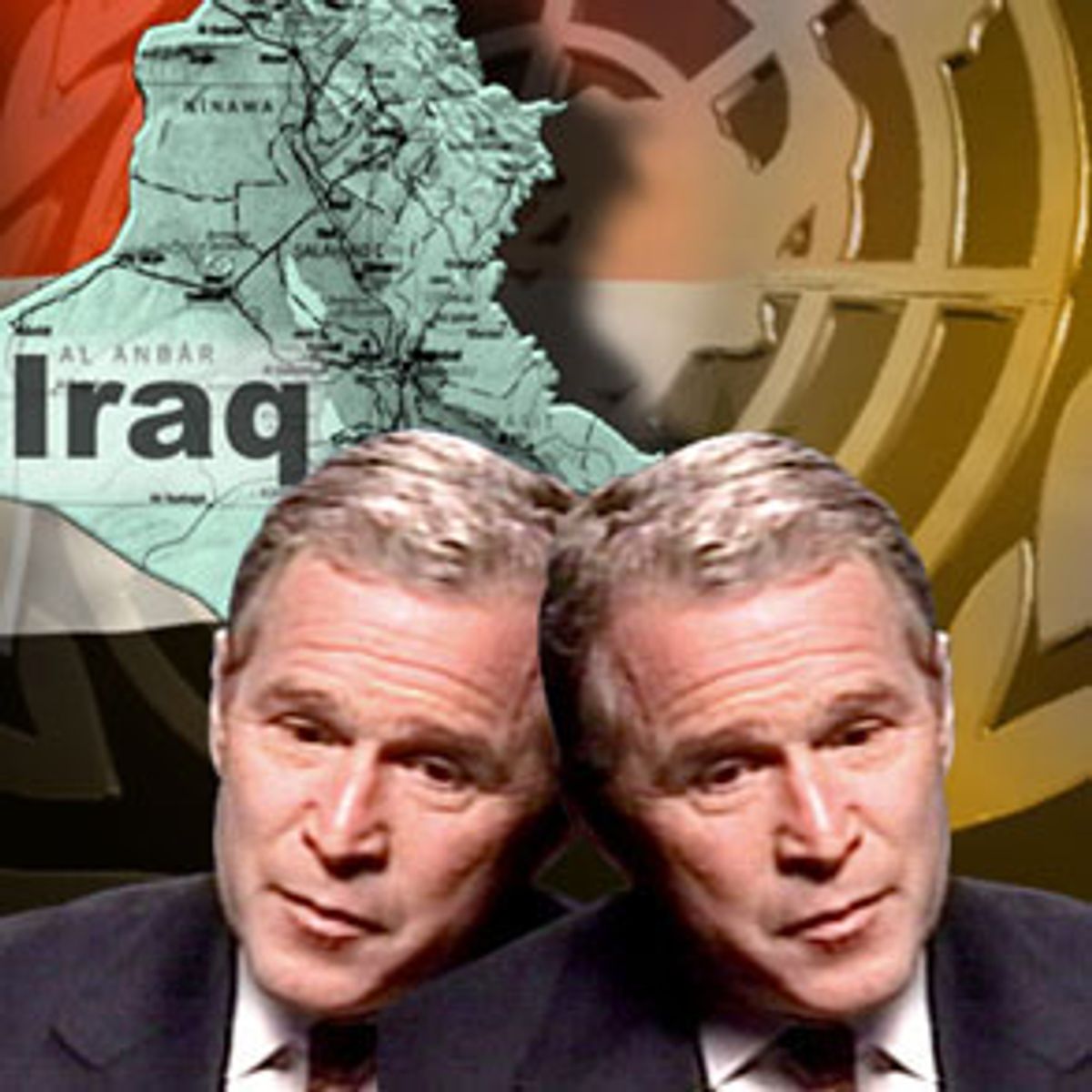 As President Bush prepares to address the United Nations Thursday about what should be done in Iraq, Senate Democrats became more vocal about the administration's build up to the speech, claiming it shows an administration in disarray, with no clear vision of what should be done about Iraqi dictator Saddam Hussein, let alone how to achieve any concrete military goal.

Vice President Dick Cheney, Secretary of State Colin Powell, Defense Secretary Donald Rumsfeld and National Security Advisor Condoleezza Rice all hit the Sunday talk shows this past weekend to build up the president's address, set for Thursday morning at U.N headquarters in New York. But Democrats said the talking points recited by senior Cabinet members Sunday reflected the latest change in an Iraq strategy that has seemed to be in a constant state of flux over the last few months. Democrats say the administration is now backing away from a call for regime change in Iraq as the president tries to get world leaders on board for some kind of action against Saddam Hussein's weapons of mass destruction program.

That shift, the Democrats say, while primarily rhetorical, is significant, suggesting that the administration may work hard to rebuild an international coalition against Iraq. That backing away from a more unilateralist stance represents the latest shift in what has been a summer of mixed messages from various corners of the White House, the Democrats complain.

"You've seen this change in their position from 'we can go it alone' to 'wait a minute, I guess we're going to go to Congress and consult and get approval.' Then all of a sudden, here comes the United Nations, now we're going to the United Nations. Then, oh no, [weapons] inspections are terrible. [Then] well, maybe we can have inspections, but they've got to be serious.' It's hard to keep track of that," said Sen. Richard Durbin, D-Ill. "Here's the president in Crawford, Texas, saying, 'avoid the frenzy,' and then the next week Vice President Cheney makes two major speeches to various veterans' organizations beating the drum for war. And you're thinking to yourself, 'Who's on first? What is the strategy? What is the message we're sending?' Meanwhile around the world, people are scratching their heads."

Last weekend, the White House spoke with a loud, unified voice, and everyone was right on message. All of the Cabinet members repeated the president's axiom that with regard to Iraq, "the one choice we don't have is to do nothing." All were asked about whether Bush would stop short of demanding Saddam's overthrow, but all encouraged Americans to look to the president's speech for the answer to that question.

On NBC's "Meet the Press," Cheney seemed to suggest that while the United States could maintain a national goal of regime change in Iraq, the administration may ask for something less from the United Nations this week. "The president has made it clear that the goal of the United States is regime change," Cheney said. "He said that on many occasions. With respect to the United Nations, clearly the U.N. has a vested interest in coming to grips with the fact of Saddam Hussein's refusal to comply with all those resolutions."

When Russert asked if Cheney was saying there could be no disarmament without getting rid of Saddam, Cheney replied, "I didn't say that. I said the president's objective for the United States is still regime change. We have a separate set of concerns and priorities with the U.N."

But even critics of the administration's Iraq policy, like Durbin, concede eliminating the threat Iraq poses to the world without getting rid of Saddam may be impossible. "I don't know that you could ever achieve it. It's an interesting hypothetical," he said. But he made the same point that multilateralists within the administration, like Powell, have made: Reprising the call for Saddam to allow the return of U.N. weapons inspectors is an important step in building international support for any possible military action in Iraq. "The United States should not be doing this alone," he said.

Durbin suggested Bush was attempting to use the emotional weight of Sept. 11 as a tool in his efforts to build his case against Iraq. "Frankly, the president's chosen the day and chosen the place for the most impact in terms of the speech," he said. "I think after that is all past, people are going to say, all right, where's the evidence?"

Senate Foreign Relations Committee chairman Sen. Joe Biden, D-Del., said the administration's latest rhetorical shift means there may be no vote on a congressional resolution authorizing force before the October recess. "I don't think it's inevitable," Biden said, adding that the president's speech Thursday may answer that question, too. "I don't know what he's going to say, but let's assume the president says this is the world's fight, not just our fight, the U.N.'s credibility is at stake here. It's important to get inspectors back in. I'm going to have my secretary of state up here saying, inspectors back in under the following conditions, and a time frame in which that has to be done. That may mean he doesn't come back to Congress right away."

One Democratic senator suggested that's exactly what Sunday's rhetorical tweaking by the White House points to. "Isn't it kind of an epiphany that the president has decided he's no longer using the words 'regime change' and is talking about 'disarmament'? Don't you find it kind of interesting that just a couple of weeks ago, Rumsfeld and everybody else said inspectors are irrelevant? Remember all that? Well, what's happened?" The senator answered his own rhetorical question: "I'll tell you what happened: The president was making up his mind. It had not been made up when all that chatter was going on in August."

The senator agreed that despite what the Senate leadership has said, and what the White House has called for, there may not be a vote on Iraq in Congress this year. "I went home during August, and I'm hearing people say the following two things: If we go to war, the president should go to Congress first. And second, they say don't do this alone. Get the support of our allies," the senator said. "Does a Republican candidate for the Senate want to vote for a Gulf of Tonkin resolution before the election? I don't think so." The White House refused requests seeking comment for this story.

Senate Majority Leader Tom Daschle gave his own set of mixed messages about Iraq Tuesday. He said that if the White House wants a vote on a resolution authorizing force in Iraq before Congress adjourns, he will bring the resolution to the Senate floor. But, he said, whether or not Congress votes on Iraq this year will also depend on the reaction of the United Nations and the international community to the president's speech, and the administration's willingness to send members of the Cabinet to testify before Congress to make the case for military action. In the end, Daschle said, "we don't have much choice to respect the request of any president, including this one. But as I say, I think that's a deliberative judgment that I hope will be made in concert with, and not dictated to, the Congress."

Durbin suggested the administration has a lot of work to do before they get his vote authorizing force in Iraq. Durbin said the prospect of a preemptive war could set a dangerous precedent that could be used for justification of war in other global hot spots. "I personally think we ought to think twice, and think hard, about this preemption strategy. If we buy into the premise of preemption, what do we say in Kashmir? What do we say in the straits of Taiwan? I think it creates a whole new set of problems."