A "This American Life" commentator celebrates nerds and explains how to love your country without turning into a boorish, jingoistic, kitsch-crazed lout. 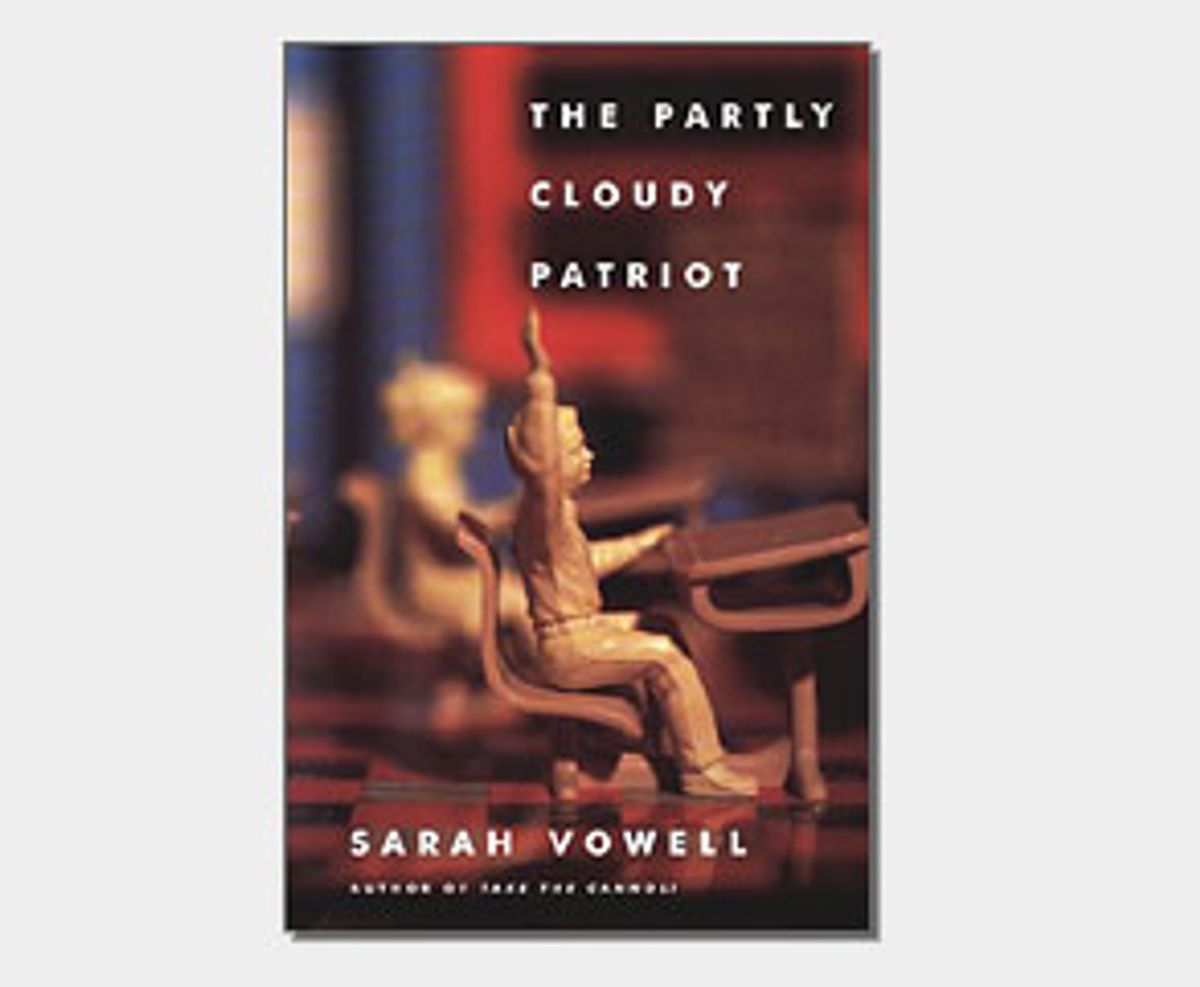 Wouldn't it be nice if you could be a patriot without having to fly the flag from your porch and the antenna of your car every day, if you could skip applauding crappy, gung-ho songs about how great America is, cheering saccharine, saber-rattling speeches about how great America is, and otherwise wallowing in all the lamebrained, jingoistic posturing that now seems required behavior for U.S citizens who wish to demonstrate a commitment to their country? Yes, it would be very nice.

Good news: At least one of us has managed to pull it off. In her third book, "The Partly Cloudy Patriot," Sarah Vowell does a bang-up job of being a good American without being a terrible bore. A solid thinker with a warm heart and a smart mouth, she loves the U.S. in much the same way that one loves one's family (or perhaps a favorite flea-bitten old dog) -- acutely aware of its many shortcomings, but true-blue to the end. "My ideal picture of citizenship," Vowell writes, "will always be an argument, not a sing-along."

Vowell is a patriot for the rest of us; she believes that devotion to one's country and an unquestioning support of its government are very different notions. She's not a breath of fresh air; she's a deep, satisfying toke of pure intellectual oxygen. This collection of essays, two of which were first published in Salon, arrives just in time to remind us that America is at its best when it's not blustering, preening and patting itself on the back. When a citizen with a sharp tongue and a wicked sense of humor exercises her mind without kowtowing to that "my country right or wrong" baloney, the U.S. can really shine, as well as laugh.

"Immediately after the attack" of Sept. 11, Vowell recalls in the book's title piece, "seeing the flag all over the place was moving, endearing. So when the newspaper I subscribe to published a full-page, full color flag to clip out and hang in the window, how come I couldn't? It took me a while to figure out why I guiltily slid the flag into the recycling bin instead of taping it up. The meaning had changed; or let's say it changed back. In the first day or two the flags were plastered everywhere, seeing them was heartening because they indicated that we're all in this sorrow together. The flags were purely emotional. Once we went to war, once the president announced that we were going to retaliate against the 'evildoers,' then the flag started making me nervous. The true American patriot is by definition skeptical of the government. Skepticism of the government was actually one of the platforms the current figurehead of the government ran on. How many times in the campaign did President Bush proclaim of his opponent, the then vice president, 'He trusts the federal government and I trust the people.'? This deep suspicion of Washington is one of the most American emotions an American can have. So by the beginning of October, the ubiquity of the flag came to feel like peer pressure to always stand behind policies one might not necessarily agree with. And, like any normal citizen, I prefer to make up my mind about the issues of the day on a case-by-case basis at 3 a.m. when I wake up from my 'Nightline'-inspired nightmares."

In the 19 essays collected in "The Partly Cloudy Patriot," Vowell writes about her love of Abraham Lincoln's writing (she calls him "the American Jesus"); "growing up pretentious" in Bozeman, Mont., as a teen cinéaste who doted on the films of Wim Wenders, Werner Fassbinder and Schlöndorff; Teddy Roosevelt; her family; the Salem witch trials and a tour of Salem; the weird lunchroom 750 feet underground at Carlsbad Caverns, and numerous other disparate topics, all of which have to do with the odd character and affectations of this peculiar country and how they resonate in Vowell's life.

Her grim funniness makes reading her prose addictive, especially if you've never quite been able to cram yourself into the American dream. Recalling her own second-grade self in a piece about selling antique maps in San Francisco, she writes, "I think the reason I wasn't cut out to be a good map seller or a good Californian had something to do with the fact that I dressed up as Wednesday Addams for Halloween that year. 'The Addams Family' and 'The Munsters' shows, where roses were grown for their thorns and pretty blondes were pitied as monsters, were on TV every afternoon after school when I was a little kid. Throw in three Pentacostal church services a week where they preached that the Antichrist would be a sunny, smooth, all-American charmer, and you have the makings of an insular worldview. Namely, a sneaking suspicion that there's always a dark side of nice."

Americans relish contradiction, she says, and she trots out her own quirky interests as an example. We've also got an inherent tabloid sensibility, and even on a trip to Paris Vowell's Yankee attraction for sensational trivia bubbles to the surface in a way that makes you want to take her along on your next trip, or at least buy her a beer. "The French Revolution walking tour I took was mostly a drag," she writes, "except for a gripping if questionable anecdote about Danton, whose lip was split when he was suckling milk from the teat of a cow and the bull came up and knocked him down and while he was lying there a bunch of pigs trampled his face. Nevertheless, according to the guide, an Englishwoman in a hat, the ladies adored Danton because he was 'so vital.'"

Vowell's book is liberally sprayed with armor-piercing quips, such as this fatal shot from an essay in which she takes exception to people, like Ted Nugent, likening themselves to civil rights icon Rosa Parks. "In his autobiography, 'God, Guns and Rock 'n' Roll,' [Nugent] refers to himself as 'Rosa Parks with a loud guitar,'" Vowell writes. "That's so inaccurate. Everyone knows he's more like Mary Matalin with a fancy deer rifle." Whoa, Ted, we better get you to a doctor -- that's no flesh wound!

But there's more to Vowell than precisely targeted sarcasm. She has a feel for this country and its history that's as authentic as it is unsentimental. She understands that we're a bunch of damn goofs and that our system, while it's a mess, may also be the best there is right now. Vowell also grasps that some of our number have achieved greatness, yet the most visionary of leaders -- Lincoln, for example -- would never have strutted about declaring themselves visionaries, which became something of a habit for our captains of industry in recent years. That Lincoln wrote his own material and wrote it beautifully moves her to call him "one of my favorite writers." "My grandest hope for my own hastily written sentences," Vowell says, "is that they would keep a stranger company on an airplane. Abraham Lincoln could turn a pretty phrase such as 'I invoke the considerate judgment of mankind' and put it in the proclamation that freed the slaves. Even Mailer wouldn't claim to top that."

Of course Norman Mailer is the perfect reference, as he embodies America with all its flaws, biliousness, poetry and brilliance; our best qualities are often inextricably linked to our worst. Vowell gets this, embraces it even -- loves the contradiction. We do best when we keep our self-deprecation quotient high, but when we get puffed up and earnest we're tedious twits. However, Vowell's even got good things to say for tedious twits, namely, Al Gore.

In one of the book's strongest pieces, "The Nerd Voice," in which she identifies herself as "a civics nerd first and last," Vowell tells of attending George W. Bush's inauguration, where the only person on the dais she's happy to look at is Bob Dole, for whom she's got a soft spot because "he symbolizes a simpler more innocent time in America when you could lose the presidential election and, like, not actually become president."

Later in the essay she extols Gore's nerdiness and goes on to effectively diagram why it worked against him so well in the presidential race -- a contest she sees as jock vs. nerd. Vowell quotes a friend who explains, "[Gore] was widely perceived as arrogant. If you know something, you're not smart. You're a smarty-pants. It's annoying. People get annoyed with your knowledge. It goes back to high school, to not doing your homework ... 'There's something I should know, I don't know why I should know it but someone knows it and I don't. So I'm going to have to make fun of him now.'"

Yet Vowell makes a distinction between what she terms jocks, athletes and sports fans. "Great athletes are no different from great artists," she says, and she respects a "certain kind of statistically minded sports fan that's an actual subspecies of nerd." Jocks, on the other hand, are what "writer and hockey fan Dave Bidini once described as 'dull-witted, chick-baiting dickheads.'" (Specific enough for ya?) She then invokes the behavior of Willow on TV's "Buffy the Vampire Slayer" as an object lesson in how Gore might reconstruct himself as likable without deserting his genuine wonky self. "Willow is not a self-hating nerd," Vowell writes. "She is a self-deprecating nerd. While Gore, like Giles [another "Buffy" character], is the butt of other people's jokes, Willow, a postmodern nerd, peppers her cerebral monologues with one-liners that make light of her own book learning."

Vowell calls that combo the nerd voice and insists it's a winner. "It's the self-deprecating impulse Gore lacks," she writes. (Note to Al Gore: Next time you run, hire Vowell as your image consultant, not Naomi Wolff.)

Vowell ends the essay with a long, eloquent paragraph that ought to be carved in stone somewhere on a public thoroughfare in the nation's capital, or perhaps posted outside every polling place come Election Day. It comprises a litany of the things a presidential candidate should know, ranging from the names of "all the stars" and "kings and queens of Spain ..." and the ability to "explain photosynthesis to a six-year-old" to "the words to Hoagy Carmichael's 'Two Sleepy People' and 'You Got the Silver' by the Rolling Stones."

It's a great piece of writing, a sharp example of American goofing, funny and true and fraught with deep contradiction, just like the country. From Mark Twain to Richard Pryor, Americans have often stumbled on the truest truths while snorting with laughter. "The Partly Cloudy Patriot" continues a fine tradition.