After weeks of fumbling and GOP infighting, the president takes his case to the U.N. 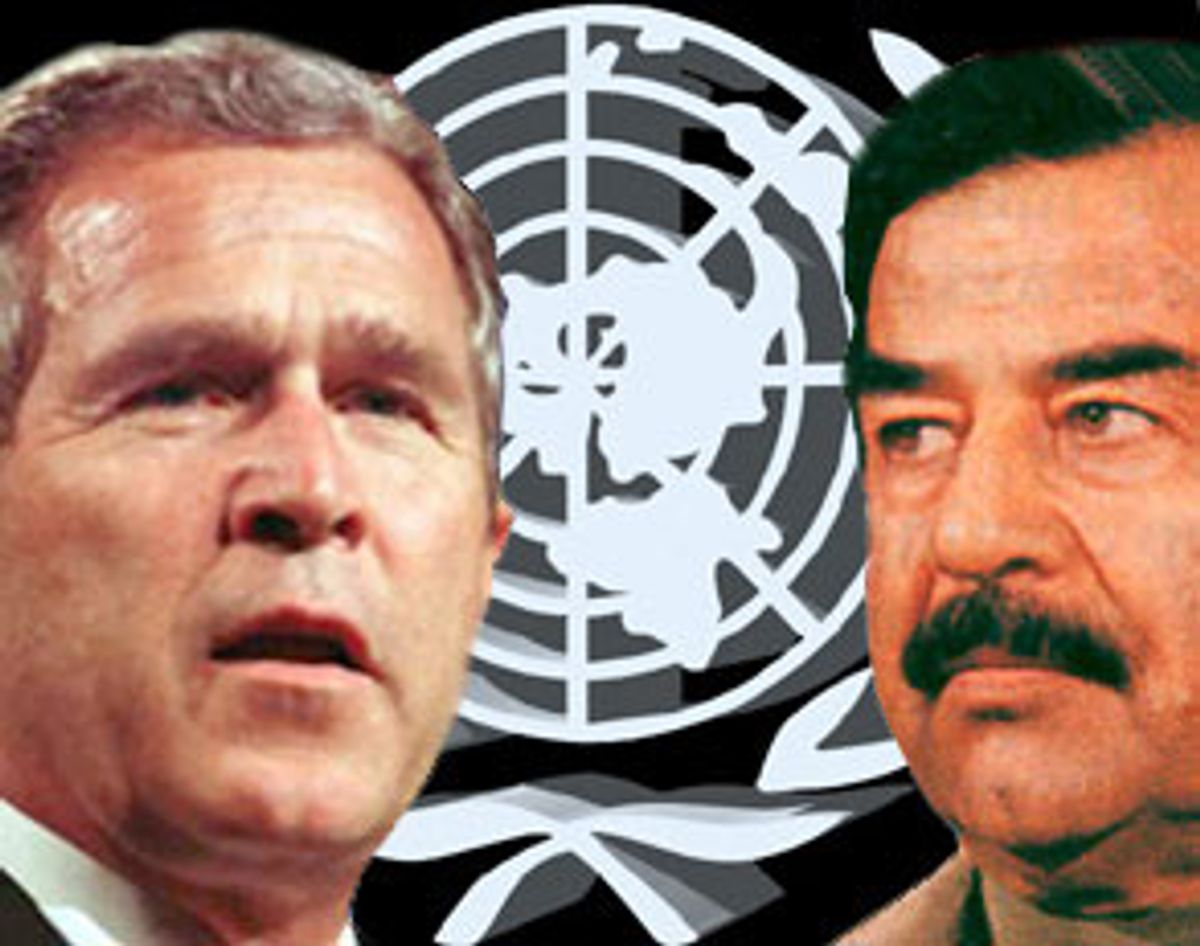 With world leaders awaiting a clear justification for an invasion of Iraq, President Bush will go to the United Nations Thursday morning to make a speech that could prove pivotal to history. White House officials must be hoping that, after eight months of shifting and often confusing signals, they can get their message right.

Though lauded for its discipline and ability to stay on message and control the public debate, the Bush administration has done a surprisingly poor job of persuading the public, mainstream pundits, Congress and foreign allies of the need to confront Hussein. With too many messengers reading different, and sometimes contradictory, scripts, the administration has often undermined its own credibility.

Bush will try to fix that problem at the U.N., speaking directly to the international community, and detailing what one administration official called Hussein's "decade of defiance." He is expected to challenge the U.N. community to take significant action to bring Hussein back in line, or to step aside and let the United States do it. The question is: Will the president's high-profile address be enough to begin restoring the public relations damage done in recent weeks?

It's not clear whether the White House communications breakdown reflects the departure of Karen Hughes, Bush's longtime confidant and media advisor who left in July, or whether the administration chose, for strategic reasons, to send out mixed messages. But White House officials must be aware that they have created more confusion than clarity with their recent missteps:

Nonetheless, senior White House aides insist everything is going according to script. And that even though the war message appeared to be in disarray over the summer, they were determined to wait until after the Labor Day weekend to launch, or market, their war. "From a marketing point of view, you don't introduce new products in August." That's what Andrew Card, the White House chief of staff, told the New York Times last week, in a quote that quickly gained infamy for its brazenness. (ABC News' must-read Beltway blog dubbed Card's quote "completely priceless.")

For now, the White House's idea of a meticulously planned media campaign seems to consist of simply ratcheting up the war rhetoric, which Cabinet members did last Sunday on the television talk shows, apparently hoping to capitalize on the high emotions surrounding the Sept. 11 anniversary memorials.

On CNN, National Security Advisor Condoleezza Rice spoke gravely about the specter of Hussein unleashing "a mushroom cloud," while Rumsfeld told CBS's "Face the Nation" that Hussein might soon attack America and kill "tens of thousands of innocent men, women and children."

The administration seems to have set extraordinarily low thresholds for success. After spending a combined 30 minutes last Friday on the phone with leaders of China, Russia and France, one White House aide told the New York Times that while none of the leaders were any closer to supporting a war, "they all agreed that Iraq posed a threat." But didn't they all agree that Iraq posed a threat last year, before the White House began beating the drums of war?

The poll numbers tell the communications story to date. Just 27 percent of respondents think Bush has clearly explained the U.S. position with regard to possibly striking Iraq, according to a Sept. 5 CBS News/New York Times poll. Asked by ABC News at the end of August whether Bush himself had a clear policy on Iraq, only 40 percent thought he did, down 5 percentage points from just two weeks earlier. Those are hardly sterling numbers when the policy in question involves launching a new war.

The fact is, most polls show that the more Bush talks about war, the less support there is for military action against Hussein. And the percentage of Americans who support a unilateral invasion without U.N. approval, which is what administration hawks have been advocating for months, can be measured in the high-teens and low 20s.

Those numbers could change in coming weeks, with the White House's all-out P.R. offensive. But to date, even those who support regime changing in Iraq have given the White House's efforts low marks. "It's more of a summer of public disarray by the administration," Richard Holbrooke, former U.S. ambassador to the United Nations, told Fox News. "Instead of making the case unambiguously with a single group of people singing from the same song sheet, they're singing different lyrics to the same music, and they're undermining their case."

Lieberman's remark hints at another crucial goal for Bush's speech. For months, Democrats have been reluctant to stake out a strong antiwar position. But as voters have become more ambivalent about an invasion, Democrats have become slightly more outspoken. If Bush is persuasive in his speech, public opinion may rebound, and the Democrats would find it politically difficult to oppose the war.

In retrospect, it seems clear that the White House lost important ground during July and August, when neo-con hawks outside the administration, trying hard to influence decisions being made inside the Oval Office, were running wild on news talk show programs and newspaper Op-Ed pages ginning up talk of war. All the while the administration refused to lay out an official rationale for war, insisting the timing was not right.

It was during those months that enthusiasm for war declined steadily. According to a recent ABC News poll, support cratered 13 points during just two weeks in August, from 69 percent to 56 percent. Support has fallen 22 points since last November, according to ABC.

Today, there's a whiff of desperation in the air, with the White House and its allies in the press realizing that the reasons they've been floating this year for going to war have not been embraced by most Americans. Suddenly, there's a need for bolder accusations and more dire predictions.

Last week, the Wall Street Journal's editorial page, which has been churning out bomb-Iraq columns with numbing regularity, dedicated substantial space to the fringe conspiracy theory, dismissed by prosecutors, that an Iraqi restaurant worker colluded with Timothy McVeigh in 1995 to blow up the Alfred P. Murrah Federal Building in Oklahoma City. The alleged connection between Iraq and Oklahoma City is supposed to provide yet another reason why the U.S. needs to take out Hussein. But even in its detailed conspiracy story, the Journal didn't provide a direct connection between Hussein and the Iraqi, other than the fact that the man spent some time in the military. The piece was written by Micah Morrison, a senior editorial writer at the Journal who gained a certain notoriety during the Clinton years by chasing all sorts of conspiracy theories, most notably that as governor of Arkansas, Clinton was somehow associated with a drug running operation out of a remote airport in Mena, Ark.

And last week, Defense Department advisor and leading Iraq hawk Richard Perle tried to up the ante when he told an Italian newspaper: "Mohammed Atta met Saddam Hussein in Baghdad prior to Sept. 11. We have proof of that." For months Perle, citing unconfirmed reports, had been insisting the key hijacker had, at best, met with an Iraqi intelligence officer in Prague. Suddenly, Perle has Atta meeting personally with Hussein.

Hawks in the press also seem to be confusing rhetoric with concrete evidence. A recent Wall Street Journal editorial noted critics were urging Bush to "make the case" against Iraq. The Journal cheered that Bush had done exactly that when he told congressional leaders: "Saddam is a serious threat." Even Republican members of Congress didn't buy that simplistic argument, and began to broadcast their frustration with the White House's lack of concrete reasons for waging war.

"We want to be with you," Oklahoma Sen. Don Nickles, the Senate's No. 2 Republican, told Bush at the meeting, according to Time magazine. "But you're not giving us enough." Added Idaho Sen. Larry E. Craig, chairman of the Senate Republican Policy Committee: "If I voted today [on a war authorization], I would vote 'no' because I don't believe the case has been made to the American people."

After the White House spent much of the year hammering the "axis of evil" and talking up an Iraq invasion, the fact that it and its allies are still busy trying to win over conservative Republican members of Congress highlights just how poorly the war message has been managed.