Forget the small talk, the easy gags, the relationships. Contestants on "ElimiDATE" -- the best dating show on TV -- just want to get it on. 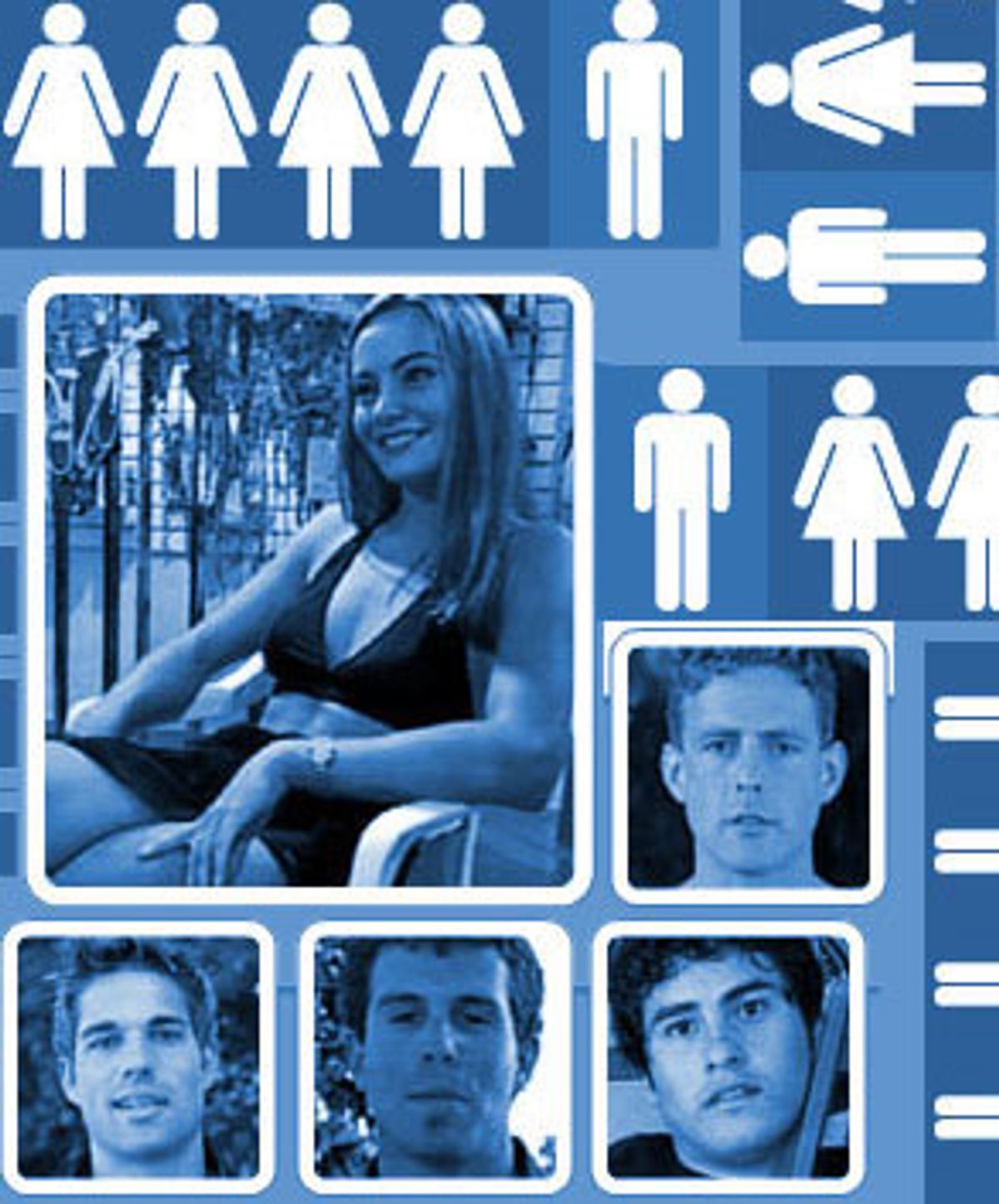 Oh, and a nice rack too. Punched his fist while he said it, too, for emphasis, because that's the kind of guy he is. That's also the kind of guy "ElimiDATE," which airs in syndication, likes: buff, suffused with a confidence bordering on arrogance, not necessarily bright and on the hunt for a mate. Over the course of a half-hour, he'd be introduced to four women, shedding them off one by one. And, at the end, he'd eventually settle for that Perfect Match. No, wait: not a perfect match. Just somebody who was fun enough to hang with for an evening.

It took a few decades of lousy dating shows, but somebody's finally got it right.

Thanks to the recent spate of reality television, the dating game show is enjoying something of a renaissance. (What's more real and universal than falling in love?) There's no question that the genre was due for a tuneup: It's hard to imagine now, but people once enjoyed shows like "The Dating Game" and "Love Connection," where people just sat around and talked about dating. But even though we now get more visuals with our voyeuristic spying on romance, the latest shows still border on the comically, unwatchably awful. On the networks, we've gotten high-concept series like "Bachelorettes in Alaska," "Temptation Island" and "The Bachelor," where groups of undifferentiated folks struggle to Find the Right One for week upon angst-ridden week. Over on the UHF end, there's the syndication soup of "Rendez-View," "Blind Date," "Third Wheel" and "Shipmates," all of them sick with chatty hosts and bad jokes popping up on-screen. The producers know that two strangers aren't interesting enough left by themselves; subjecting every sip of chardonnay and comment about an ex-boyfriend to dreary, mocking analysis makes things even duller.

The root of the problem with all those shows is an ironic one: They emphasize all the big questions of True Love and Finding Mr. (or Miss) Right, and the One. Admirable a sentiment as that is, it makes for dull viewing. Love is thought about, talked about, felt, but it's not truly a visual thing. And TV dies without pictures.

On the face of it, the noisy, sex-soaked "ElimiDATE" doesn't look like much of a revolution in dating shows -- we've seen couples in bars and on dance floors before. Yet the pleasure of "ElimiDATE" -- and admittedly it's a guilty one -- is that it gleefully throws True Love and the One off the table. It offers no hosts, no chirpy ongoing analyses, no presumption of true love or even romance. It's "gamed," to be sure -- most episodes are alcohol-fueled, its producers are spending a fortune on Jacuzzi rentals, and its preferred dating candidates are image-obsessed gym clones. But there's wisdom in that, too. "ElimiDATE" smartly presumes that we don't care about the end result of the date -- we just want to see the process.

If that sounds a bit familiar too, you're right. You've probably already seen the show that "ElimiDATE" models itself after. Not "The Dating Game," not "Survivor." No: Without apology, "ElimiDATE" takes its cue from a pioneer in television history: "Mutual of Omaha's Wild Kingdom." True love's nice, sure. But, for our human specimens here in the jungle, a nice pooper will do.

"I make people think," says Viji, a young physiologist from Vancouver who's competing for the attention of Ian. She's young, smart, confident, attractive -- in other words, pure dating-show gold, even back when Chuck Woolery was running the joint. But things are different in the dating world "ElimiDATE" conjures up. Ian works at "one of the hottest restaurants in the city" and what he really wants is a woman who is "energetic" and "likes great sex." So by the time Viji and two other women hit the exotic clothing store -- where she refuses to dress up like a virgin or a schoolgirl like the others -- she's gone. "Viji is frigid, snarky and annoying," as one of her competitors puts it.

That's hardly fair to Viji as a whole person, but the "whole person" doesn't mean much on "ElimiDATE." A typical episode starts with drinks, goes out dancing, then winds up making out in the hot tub. Maybe your idea of a get-to-know-you first date probably doesn't involve body shots at 3 in the afternoon. But your idea of a first date probably makes for lousy television, too. That's not to say the show doesn't offer a few insights into the human animal. Watch enough episodes and you'll notice that in the dating world the show contrives, people tend to fall into four types.

1) The Dullard. Well-meaning and good intentioned, he or she simply doesn't move fast enough. Sits on the sidelines, nurses his or her drink, asks probing questions like, "What do you look for in a person?" which the contestants seem coached to rebuff ("I'd like to hear what you look for"). Gone first, usually with some comment like, "I just didn't feel that click."

2) The Instigator. The polar opposite of the Dullard, he or she moves too fast, drinks a little too much, and picks fights with the others. On "ElimiDATE," this (with remarkable regularity) usually means a woman accusing another woman of having implants. On a recent episode, this played out with one woman trying to strip off another's half-shirt on the dance floor. Drunken catfighting ensued. Usually gone second.

3) The Willing Target. Can't resist responding to the salvos of the Instigator, usually with embarrassing results. On one of the rare episodes where four men vied for one woman (if nothing else, "ElimiDATE" knows its male, Maxim-reading audience), unemployed Clay keeps riding bartender Eddie for bringing flowers to the occasion. Eddie's retort is simple-minded and childish -- "What do you expect from somebody named Clay?" But Clay's gone: "I thought it was cute that Eddie brought flowers," the bachelorette says.

4) The Cunning and Bright Creature of Sensuality, Charm and Wit. Like the Dullard, steps back a little bit, but plays well with others, and tends to avoid knock-down squabbling, preferring instead to slyly position him or herself next to, as "Wild Kingdom" would put it, the potential mate.

Your mileage may vary as to whether any of this resembles your romantic life. But if you subscribe to the idea that you'd like your mate/lover/spouse to be a wise, observant and sensual soul, and that sexual attraction is important if not essential, then "ElimiDATE" actually hews to a sense of reality that other shows don't match. Like every other dating show, critics have been quick to call it humiliating and depressing to watch. But "ElimiDATE" never falls victim to the most humiliating and depressing problem with other dating shows: Watching two people who truly aren't enjoying each other's company stick it out for a night because, well, they agreed to be on a TV show. "ElimiDATE" subscribes to the notion that there's a right person out there; it just rejects the idea that it'll happen on the first date.

Cynical? Sure. On "ElimiDATE," nobody believes they'll be finding the right one -- or if they do, they're gone quick -- but everybody figures that if they have a good time and see interesting things, it's worth it. Just as with television. When "Blind Date" episodes turn boozy or crass, one person usually bemoans the horrible thing that just happened to him or her. But because "ElimiDATE" is boozy and crass right from the start, everybody knows what the game is, and nobody's particularly shocked. As the show itself subtly admits, what's happening isn't a date at all: "Three get the ax, one gets the date" is the opening tag line. "ElimiDATE" is a pre-date experience.

When the show debuted last season, most television critics wrote it off as a cheap imitation of "Chains of Love," a network (well, UPN) show where a man was fettered to four women over the course of a few days, shedding off suitors. But getting rid of the chains meant getting rid of the goofy high-concepts that plague reality shows of all stripes; reality producers tend to fear that human beings, left to their own devices, are boring, so we get hosts and "immunity challenges." "ElimiDATE," to its credit, has no such fears. (A high-concept "deluxe" version of the show, set in exotic locales, was canceled quickly; low-budget dating shows just don't work on prime time, and we have the Travel Channel for exotic locales.)

Explaining the show's concept to Entertainment Weekly last year, producer Alex Duda explained that the show's charm is its hostless-ness. "You really get to hear how they feel about their competition, and what their strategies might be," she said. "So it's kind of like that Rashomon thing, right?"

Well, closer to "Yojimbo," if we're throwing around Kurosawa references; we're the impassive smirking samurai on the rooftop, watching two tribes battling each other in the public square, and we hardly care how they interpret the fight. What we do care about is how human beings struggle to balance their sexual and thinking selves, and "ElimiDATE" does it bluntly yet beautifully. Joyously and persistently, it blurs the line between sex and love. Which makes it closer to true reality than television shows -- or their viewers -- usually admit.

At least for now. It appears we won't have its unvarnished pleasures for long. A notice on the show's official Web site suggests things are changing: "'ElimiDATE' is looking for firemen, policemen, men in uniform, cheerleaders, flight attendants, twins and siblings to cast in upcoming shows!"

Mark Athitakis is a regular contributor to Salon.