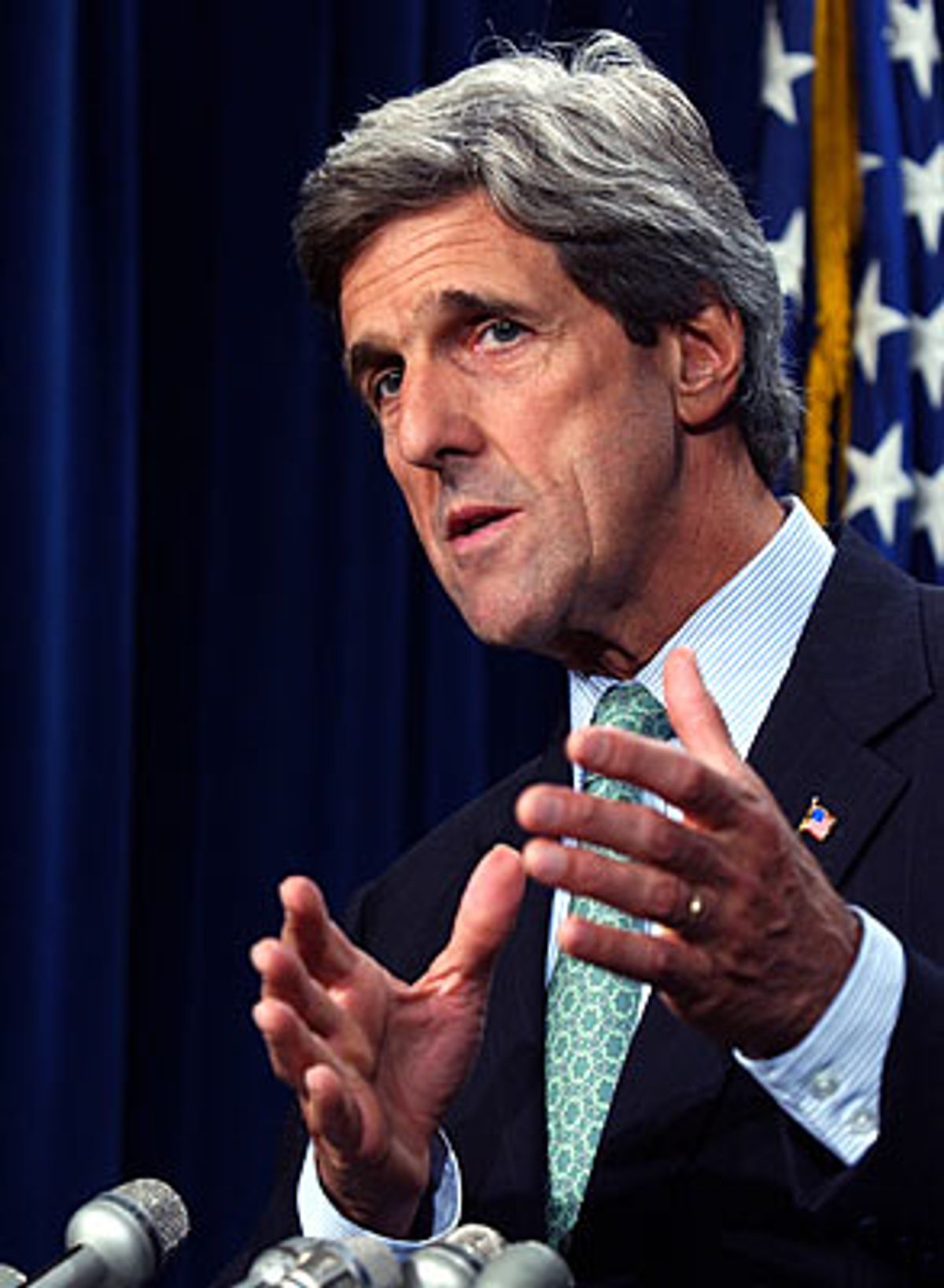 President George W. Bush's case against Saddam Hussein before the United Nations Thursday was aimed not only at a skeptical U.N. General Assembly but also at congressional critics who in recent days had tentatively begun to vocalize their concerns about possible military action in Iraq.

At least immediately after the speech, the president's critics on the Hill were silent. During the summer, members of the Bush administration, most notably Vice President Dick Cheney, suggested the administration could take military action in Iraq without the consent of Congress or the United Nations. That prompted congressional Democrats and some Republicans to complain that Bush had so far failed to make a compelling case to deploy U.S. forces against Saddam Hussein -- citing a lack of evidence that Saddam posed an immediate threat to the nation and noting our allies' tepid support of a new conflict in Iraq.

If Bush didn't make any immediate progress building a case for Saddam's removal, he at least made it clear he hoped to build an international consensus.

Bush brought a 22-page report detailing Iraq's chemical, nuclear and biological weapons threats. While making it clear that the U.S. will be forced to act if the U.N. drags its heels -- "The purposes of the United States should not be doubted," he said -- Bush emphasized a desire to have the international community behind him. For now, that has placated some of his critics.

"Today, I think the president began the first step of rehabilitating or undoing some damage done already within the international community by the saber rattling that suggested we would simply proceed unilaterally," said Sen. John Kerry, D-Mass., one of the most vocal critics of the administration's approach to addressing the threat Saddam Hussein poses to the United States.

Charles Peña, a senior defense policy analyst with the Cato Institute, said Bush's appearance at the U.N. was not necessarily a victory for those advocating a purely international approach. "If it's a victory, I would call it a very small victory," Peña said. "I think what the president is doing is nodding his head to the multilateralists. He said, 'I'll give you one more try, but we are prepared to take action with or without you.'" While Peña is not convinced Thursday's speech means there will be allied support for Iraq, he said it helps guarantee broader congressional support, particularly from Democrats. "You've got people in Congress who will support the president no matter what; they just need the right political cover. This speech today gives them that cover."

Peña says that with Thursday's speech, Bush masterfully changed the debate from a focus on whether Iraq really poses a threat to the United States to whether the administration has jumped through all the proper diplomatic hoops before military action begins. "Lost in all of this is the fact that the administration still hasn't made the case of why Iraq represents a threat that calls for preemptive military action," he said. "Even if Saddam gets a nuclear weapon, what is so special about Saddam that we could not deter him as we deterred Stalin or Mao when they got nuclear weapons? So far there's been no compelling answer to this question."

Many Democrats have seemed to stop asking. "The time has come for decisive action," said Sen. John Edwards, D-N.C. "We must do whatever is necessary to guard against the threat posed by an Iraq armed with weapons of mass destruction and under the thumb of Saddam Hussein."

But partisan divisions remain over whether Congress should vote on a resolution showing support for the president's efforts before the October recess, and whether that resolution should include a blank check for the president to use force in Iraq if he is not satisfied with the international response to his new demands of the Security Council.

"I was encouraged by his expressed desire to go to the international community in search of support of a coalition, as his father did. That international support, I think, is a critical element to our overall process of success," said Senate Majority Leader Tom Daschle, D-S.D.

But Daschle declined to guarantee a Senate vote on a resolution regarding Iraq before Congress adjourns. Daschle pointed out the White House has not formally asked for an Iraq vote.

Senate Minority Leader Trent Lott, R-Miss., said he expects to have a resolution drafted for debate no later than the week of Sept. 23. But, Daschle said, the administration should still make a more compelling case about the precise threat Saddam Hussein poses to the United States and the world. "I don't think the case for a preemptive attack has been made yet," Daschle said. In that regard, he called the president's speech "helpful, but I don't think it was conclusive."

Daschle also said the Bush administration's decision to back away from international treaties somewhat undermines its current call for the vigorous enforcement of international law. "It makes things much more complicated. I think each unilateral action taken by the United States in the last year and a half undermines our ability to build a strong coalition when we need it. That certainly has been a factor" in the international reluctance to crack down on Iraq, he said.

Less than two hours after the conclusion of Bush's speech, Senate Republicans sought to present a united front in support of both the president's speech and a resolution giving the president a blank check to use force in Iraq if he deems it necessary. Lott appeared at a joint news conference with Sen. John McCain, R-Ariz., one of the administration's most persistent GOP critics. McCain and Lott said the Congress should act quickly to authorize the use of force in Iraq.

"Now it's vital for the Congress to show the world that we back this president and will give him the authority he needs to protect the American people and the world community," said Lott. "We must vote to show support for the president right now." McCain concurred, adding, "The president, I believe, deserves a vote on the part of the Congress" to strengthen Bush's hand as he continues to make his case to our U.N. allies. "I think that it would be important that Congress express its will before this military buildup begins."

But small differences remain among Republicans. Earlier this week, Bush indicated that post-Saddam Iraq was not necessarily the United States' concern. In Senate hearings this summer, former defense secretary Casper Weinberger even compared military action in Iraq to the one in Grenada, saying the U.S. could get out of Iraq within months, or even weeks, after the fall of Saddam.

But McCain told reporters on Thursday that "the American people should be prepared for a long commitment" in Iraq, even though he believes the work of overthrowing Saddam Hussein can be done quickly. McCain suggested the U.S. should first focus on getting rid of Saddam Hussein. Although McCain said he welcomed the president's decision to call for a return of U.N weapons inspectors to Iraq, he said Saddam was "as likely to allow robust and effective weapons inspection to resume as I am to be the next astronaut. He's not going to do it."

Still, Democrats called for caution. Daschle said that U.N. action was not necessarily a precondition of U.S. military action in Iraq, but that he would like to see what level of support the United States can expect from its allies in the international community before it tries to remove Saddam by force.

Kerry said he could envision a vote on a resolution before the October recess but was unlikely to support an authorization of force in Iraq; he would probably only support a resolution that backed the president's decision to go through the United Nations. Kerry said it was important for the United Nations to have an opportunity to meet the challenge that Bush posed in Thursday's speech.

"I'm talking about a number of days to weeks," Kerry said when asked how long he would give the United Nations to respond. "This is not something that should be dragged out."

Daschle said "a number of questions still remain," including what plans there were for a post-Saddam Iraq, and what effect a war on Iraq might have on the United States' efforts to fight terrorism. Daschle would like those questions answered by administration officials, who he hoped would testify before congressional committees.