Al-Jazeera joins the fall season free-for-all with its own lineup of potential hit shows. 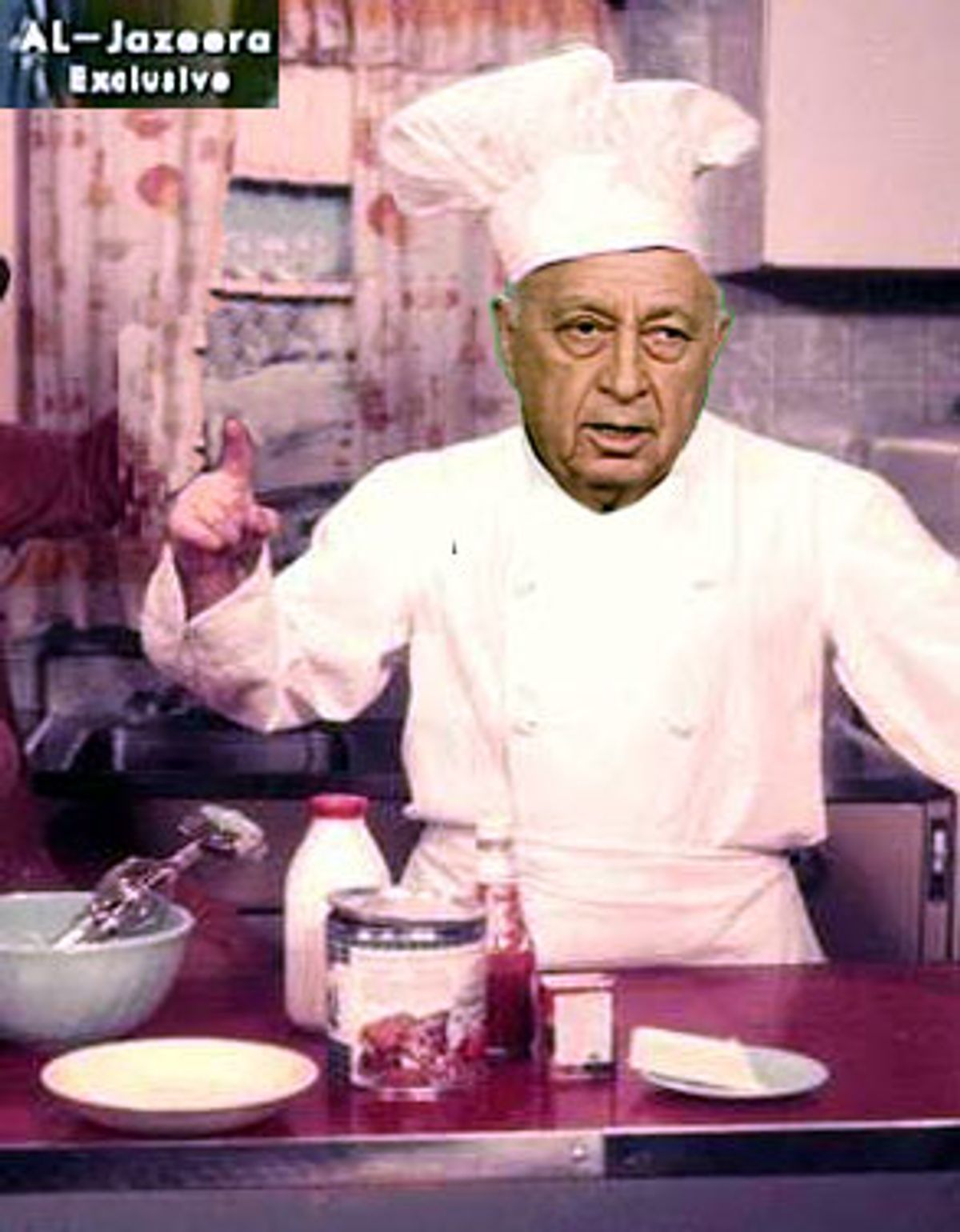 "Like America's own 24-hour news outlets, Al-Jazeera is a repetitive affair. As with CNN, it is easy to see its luster withering away in a time of peace and normalcy."

In an effort to boost its sagging ratings -- markedly down since the slowdown in the American bombing campaign in Afghanistan -- Al-Jazeera, the Qatar-based news network, last week announced its new fall 2002 lineup. The new shows, says programming director Sheikh Abdullah bin-Khalifa Rashid, will appeal to "younger, hipper viewers -- the kind that like a little UPN with their PLO."

Part of Al-Jazeera's strategy is to bring in marquee names from around the Middle East and "mix it up a little," says Rashid. "Trust me," he explains. "You put [Former Israeli Prime Minister] Bibi [Netanyahu] and [Syrian President] Bashar [al-Assad] together in a room with folding chairs and a map of the Golan Heights and people will watch. Ever see the ratings for 'Smackdown'?"

Here are some of the highlights from Al-Jazeera's new prime-time offerings:

"Cooking With Sharon" Given the recent success of several celebrity cooking shows and the popularity of the Food Network, Al-Jazeera announces the launch of "Cooking With Sharon," a one-hour cooking show hosted by the Israeli strongman. "This show is an occasional feature -- pretty much whenever the Big Guy feels like storming the kitchen," said Ali Hassan, the show's executive producer. "The audience will be right there with Ariel in the grocery store, barreling through the aisles with his shopping cart, snatching cans off shelves, knocking over displays, running down women and children. He's ruthless. But in a Cosby kind of way."

The audience also follows Sharon into the kitchen where, in the series premiere, he shares his recipes for beef Wellington, autumn squash polenta and his signature dish, Mediterranean hasenpfeffer. In between courses, the portly prime minister also speaks candidly about top-secret Israeli military strategy and his crush on Yasser Arafat. The show's producers warn, however, that the show will likely not be popular with vegetarians. Said Hassan, "They don't call him the Butcher of Beirut for nothing."

"Looking for Love: Bachelorettes in Guantánamo" Alleged Taliban detainees at Camp X-Ray in Guantánamo Bay, Cuba, are the lucky contestants in this follow-up to last season's wildly popular "Bachelorettes in Alaska" series (which aired on Fox). In the series premiere, five bachelorettes will parachute into Camp X-Ray, and the approximately 550 "enemy combatants" currently being held at the camp will compete for the chance to marry the women, with everything that entails (U.S. citizenship, the right to an attorney and an all-expense-paid honeymoon to sunny Puerto Vallarta).

Some industry insiders doubt, however, that the new series will be as salacious as its predecessor, a fact that series host Steve Santagati readily acknowledges. "There was only so much these couples could do. I mean, these guys are manacled most of the time, and they live in these wire cages guarded by Marines. There's not a whole lot of privacy there," Santagati said.

An Al-Jazeera publicist dismissed concerns that the show was exploiting the detainees. "Hey, it's no 72 virgins," he said, "but it's about as close to paradise as these guys are ever going to get. Besides, it's not like they're protected by the Geneva Convention." The series will premiere in the Wednesday 9 p.m. slot, against NBC's "The West Wing."

"Guess Who's Coming to Dinner? (2002)" In this update of the 1967 Spencer Tracy/Katharine Hepburn classic, a beautiful young woman brings her new fiancé home to meet her ACLU-lawyer father and performance-artist mother. When the young man turns out to be the wayward scion of a wealthy Saudi family, the "liberal" parents are forced to reexamine their beliefs regarding racial profiling, secret military tribunals and "nonviolent means of coercion." The advance buzz hints at a surprise cameo appearance by Sidney Poitier (who starred in the original), playing the part of embattled Secretary of State (and kooky neighbor) Colin Powell.

"Mister Arafat's Neighborhood" In the hopes of appealing to younger viewers, the network will unveil this early morning show hosted by Palestinian Authority chairman Yasser Arafat. "Mister Arafat's Neighborhood" follows the besieged Palestinian leader around his continually shrinking Ramallah compound, as he visits with bodyguards and friendly human shields. Each show begins with Mister Arafat greeting his viewers while he changes out of a flak jacket into casual fatigues.

"It's primarily educational," one of the show's co-producers said. "Mr. Arafat will be teaching the children essential skills: how to properly fold a kaffiyeh; how to use a slingshot; how to divert their allowances for his personal use. That sort of thing."

"The Odd Couple" This reprise of the popular '70s TV series (based on a Neil Simon play) brings together for the first time on television the former king of Afghanistan, His Highness Mohammed Zahir Shah, and the former prime minister of Israel, Shimon Peres. The two men -- one messy, one neat -- having been ousted from their respective seats of power, are forced to live together in a small two-bedroom apartment in Cairo, with all the inevitable hilarity that ensues.

Asked if he had any trouble getting the two respected elder statesmen to play a pair of hapless ex-heads of state, the series director, Saeed Khalifi, replied, "Really, it wasn't much of a stretch for either of them. His Highness has apparently always been a bit of a laze about, and Shimon is every bit as fastidious as Felix [Unger] ever was. Besides, they had nothing else to do." The series premiere deals with what happens when both His Highness and the Nobel prize-winning Peres unknowingly fall for the same woman. Palestinian Legislative Council member Hanan Ashrawi guest stars as the object of their mutual affections.

Also coming up this season: "Who Wants to Marry a Saudi Oil Billionaire?" "Gulfwatch" and "Sex and the Refugee Camp." Check local listings for dates and times.