Usually allied with liberal causes, many American Jews support toppling Saddam Hussein. If there's a peace movement, it will have to get started without them. 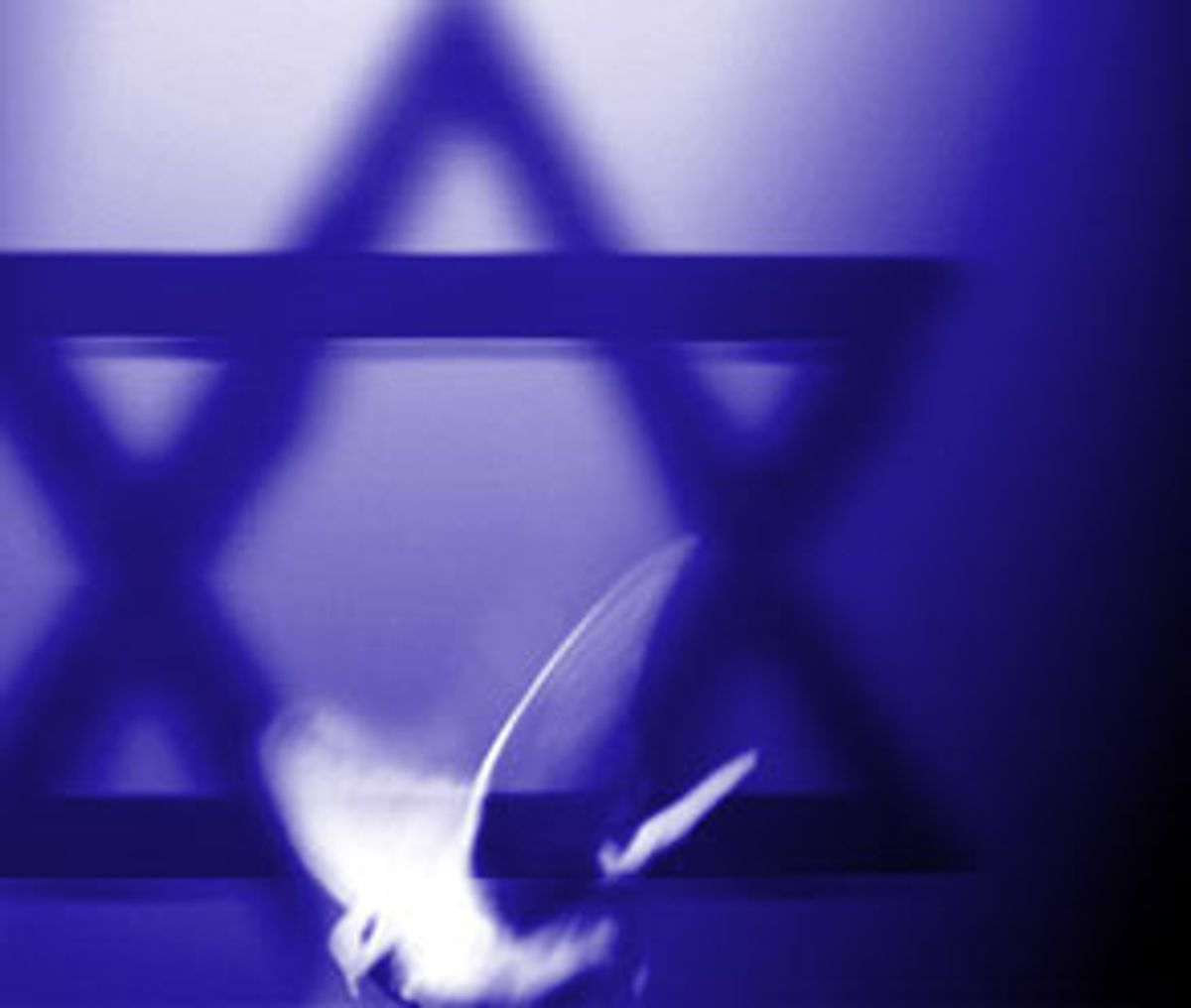 Once a pillar of the American peace movement, mainstream Jewish groups and leaders are now among the strongest supporters of an American invasion of Baghdad. Observers on both sides say that trend translates into greater Democratic disarray on the question of whether and how to fight the Bush administration's invasion plans.

In the last year, America's war on Islamist terror has further eroded the easy identification of Jews with liberal causes, a link already strained by conflict over the Middle East. The two-year intifada has left even liberal Jews despairing of the prospect for peace with the Palestinians, and the foreign-policy stance adopted by Ariel Sharon's hard-line Israeli government has largely been supported by a community that used to be a bastion of liberalism.

The American Israel Public Affairs Committee, of course, has made it policy to support whatever Bush decides to do on Iraq. But even some liberal Jewish leaders favor invading Baghdad. Rabbi David Saperstein, a liberal Washington lobbyist who heads the Religious Action Center of Reform Judaism, which represents 1.5 million American Jews, usually acts as a bulwark against the excesses of the right. Yet about a war with Iraq, he says, "The Jewish community would want to see a forceful resolution to the threat that Saddam Hussein poses."

There's near-unanimity among mainstream Jewish groups about the need for the U.S. to confront that threat. Malcolm Hoenlein, executive vice chairman of the Conference of Presidents of Major American Jewish Organizations, says, "In the American Jewish community, there's a great deal of support for the president's stand." And David Harris, deputy executive director of the American Jewish Democratic Council, argues that American and Israeli interests on Iraq mesh: "What's good for Israel is good for America, because it lends stability to the region and because it's a strategic ally."

Support for the war from the leaders of a traditionally Democratic bloc creates a potentially perilous situation for any Democrat tempted to oppose the administration's Iraq plans. In fact, among Jewish lobbyists in the Beltway, support for the impending war is almost taken for granted -- several are puzzled by the very suggestion that any kind of strenuous opposition to an Iraq invasion might emerge. This pains some old-school Jewish lefties, who see the weakening of a traditional constraint on Republican excess and who fear that Jews will take the blame should the war go wrong.

"It's a further testimony to the blindness of American Jewish leadership," says Rabbi Michael Lerner, head of the left-wing Jewish organization Tikkun. "Israel is the only country in the world that's enthusiastically backing the United States policy of a war with Iraq. This presents a terrible image of the Jewish people at a time when the United States itself is deeply divided about the wisdom of the war, and it puts the Jewish people in grave jeopardy."

William Quandt, a former member of the National Security Council and Middle East negotiator for President Jimmy Carter, agrees that if the war drags on and the perception that it was undertaken in Israel's interest grows, there's a danger of an anti-Semitic backlash. "The more immediate danger from Iraq, if there is a danger, is not to us, it's to Israel," he says. A friend of his who supports the war recently said to him, "Israel is the unspoken issue in this crisis. This is about Israel's security even more than our security, but you haven't heard anyone saying that."

Not in the United States, maybe, but in the Arab world, that's a common refrain. "The Arab world appears, for once, to be unanimous," Agence France-Presse reported last week. "It opposes U.S. military action to topple the Iraqi regime, a project which it sees as designed to seal Israeli domination of the Middle East."

That might be an overstatement, but it's not just paranoid fantasy. If the Bush administration's agenda meshes almost completely with that of the Israeli right's, it's partly because the same thinkers laid the foundations for both governments' policies. As the European press has been reporting, though it's mostly been ignored here, some of the Bush administration's current ideas about military preemption and regime change in Iraq echo a 1996 policy paper called "A Clean Break: A New Strategy for Securing the Realm," authored by a group including Richard Perle, currently a Pentagon advisor, and Douglas Feith, who is now undersecretary of policy at the U.S. Department of Defense.

Written for the incoming government of Israeli Prime Minister Benjamin Netanyahu, the paper argues that Israel should scrap the peace process, work to subdue its neighbors by force, and overthrow the Iraqi government in order to reshape the region's dynamics. "Israel can shape its strategic environment, in cooperation with Turkey and Jordan, by weakening, containing, and even rolling back Syria," the paper says. "This effort can focus on removing Saddam Hussein from power in Iraq -- an important Israeli strategic objective in its own right -- as a means of foiling Syria's regional ambitions."

Such close ties between those Israel hawks and the Bush administration give the Zionist conspiracy theorists something to talk about. "There's enough of a grain of truth in it that it makes the [American] agenda suspect," says Quandt. "The way in which this group of Americans is quoted as speaking on behalf of Israel is very interesting. Could a group of people in my business -- Arabists -- get together and simulate speaking in the voice of [Egyptian President] Hosni Mubarak? Most of us would be out of a job. It would look as if you were working not for your own country's interest. The lack of any line between American interests and Israeli interests, that's what people in the Arab world will see in this paper."

The unusually direct links between the two countries' foreign policies almost guarantees broad Jewish support for Bush's military initiatives. As peace activist and former Israeli Knesset member Marcia Freedman says, "Sharon has publicly encouraged the Bush administration to make war with Iraq. The Sharon government sees it as an opportunity to reshuffle the cards in the Middle East." And many American Jewish organizations, she says, "have chosen to unquestioningly support the policies and positions of the Sharon government. If they were going to oppose the war, they would be opposing the stated position of the current government of Israel."

Yet Jews have traditionally been loud dissenters from conservative policies. On Iraq, such dissent has been muted, at best. The loudest antiwar voices have come not from Democrats and liberals but from Republican foreign-policy "realists," none of them Jewish. While widespread Democratic silence has more to do with the party's general timorousness (as well as the genuine pro-war sentiment of Democrats like former Sen. Bob Kerrey, Sen. John Edwards, D-N.C., or Sen. Joseph Lieberman, D-Conn.) than with Jewish pressure, it's hardly preposterous to suggest that some Democrats may be responding to the concerns of one of their important constituencies.

"It would be unfair to put this on the Jews," says Lerner, but "I certainly think that there are people who would normally be expected to play a role that would challenge pro-war policies, who have become quiet because of their own ambivalence about Saddam Hussein, particularly with regard to the threat he poses to Israel."

It's crucial to note that there is principled Jewish support of a war with Iraq that's based on more than just slavish devotion to the Likud line. American Jews have been paying close attention to Saddam Hussein's atrocities for a long time, and thus some liberal Jews see the conflict in terms starkly different from their gentile brethren, many of whom have just tuned in to the story.

Rabbi Saperstein, whom the Washington Post once called the "quintessential religious lobbyist on Capitol Hill," says that Jews "remember the Scud missiles that were aimed at Israel. Jews hear Saddam's threats and rhetoric, not just against Israel but against others as well."

Thus while some liberals see the proposed war with Iraq as another American intervention in the mold of Vietnam and certain South American adventures, Saperstein compares it to Bosnia and other humanitarian missions. Although Jews were "very dovish on the Vietnam War," he says they've "always been fairly supportive of American interventions for humanitarian and moral purposes. Think back to World War II -- there was Jewish recognition that the Nazis had to be dealt with."

Framed that way, Jewish support for a war with Iraq makes perfect sense. But Freedman, for one, argues that such parallels are fallacious. "What is happening in Iraq today isn't very different than what is happening in most of the Arab world," she says. "It is not a democracy, but it's also the case that most of the hardships there are caused by the severity of the sanctions. We're not going in to rescue freedom and democracy in Iraq."

If that turns out to be true, says Lerner, "and the war drags on and involves many American deaths and a great deal of unnecessary pain to the Iraqi people, then the American Jewish leadership and state of Israel are putting Jews in a precarious position, in which we may be blamed for the craziness of this war."