In a world where more and more new books get less and less attention, authors will do anything to promote their work. 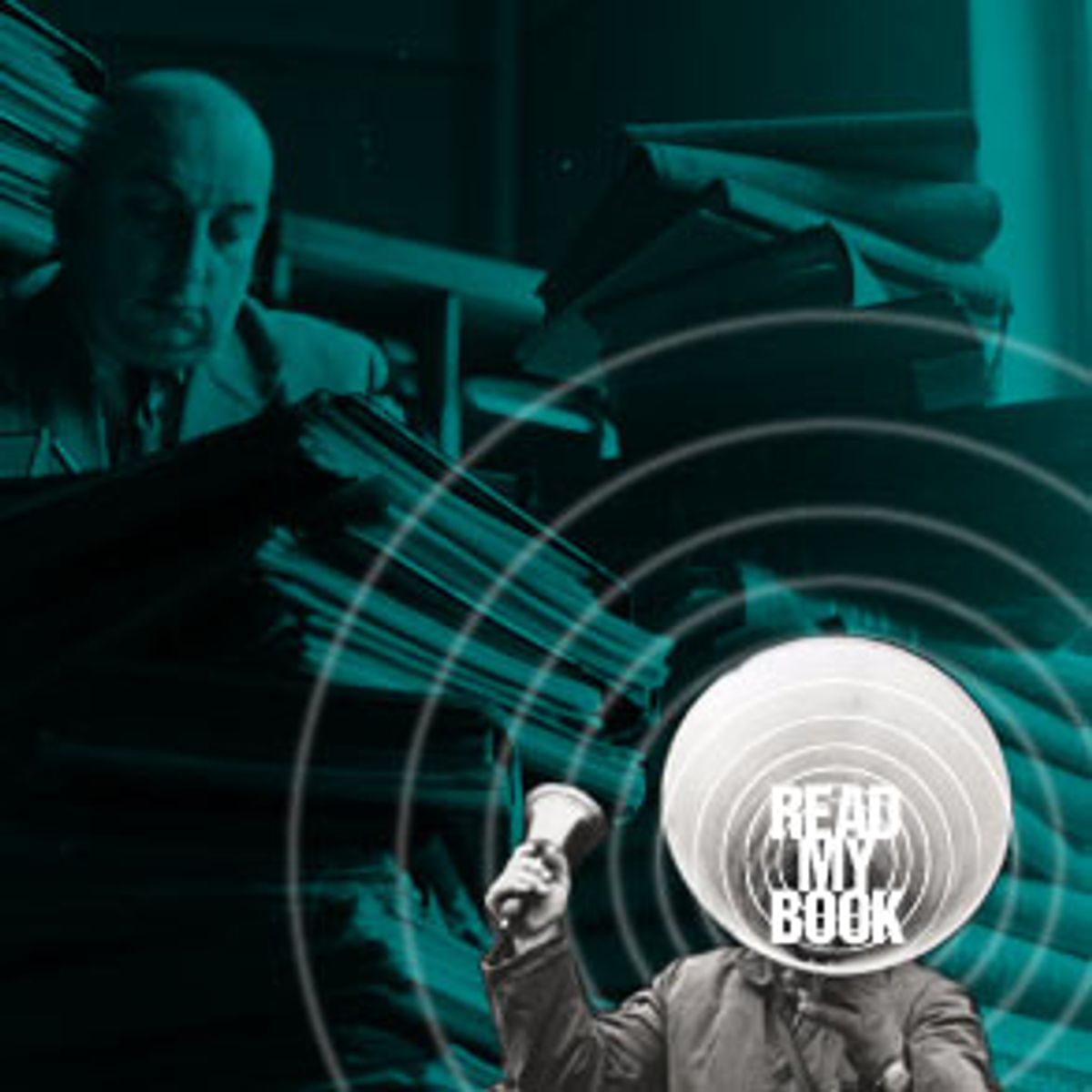 It's not easy being a book critic nowadays. Sometimes you receive daily e-mails from an author explaining for the hundredth time why his treatise on holistic vegetarianism is the "Left/Progressive answer to Capitalist, meat-eating excesses of Our Time!!!!!" Or you're implored to cover a local reading where the poet will stand at the lectern clothed only in a number of strategically pasted pages from her forthcoming chapbook. Whenever Marie Arana -- editor in chief of the Washington Post Book World and an author herself -- gives a talk or a reading, invariably a clutch of authors find her afterwards, books in hand, ready to pitch themselves.

"It happens more frequently," she says. "There's a boldness that wasn't there before."

In fact, authors often go to considerable lengths to promote their books. Some fire off endless faxes or rambling e-mails to editors and critics, some try phoning directly and the most intrepid simply show up at the newspaper or magazine's office, much to the book editor's alarm. Less aggressive (and perhaps more successful) are those who on their own arrange readings in bookstores or coffeehouses, often selling copies of their books out of the trunks of their cars. Others -- like the half-naked poet mentioned above -- try stunts and other gimmicks to draw attention to themselves.

In the past, authors relied on their publishers' publicity departments to get attention for their books. But increasingly, publishers are giving the majority of their authors less and less assistance. When times are tough, publishers prefer to invest their publicity dollars in books they're fairly sure will sell -- big-name authors, hot topics -- rather than in promoting lesser-known or new authors, especially fiction writers.

Not only that, but newspapers and magazines are trimming back their review coverage. And publishers are releasing more and more individual titles each year, what one book editor, speaking off the record, calls "spaghetti publishing: throw a pot of stuff at the wall and hope something sticks." The result is a lot of desperate authors who are realizing that getting published isn't the end of a long struggle but the beginning of an even harder one.

"Publicists started falling down on the job," says David Kipen, critic for the San Francisco Chronicle, who recalls that one time an author sent him a review copy with a $5 bill slipped inside. (He says he immediately threw away the book without reading it and used the bill to buy donuts for the office.) "The mid-list writers, in their defense, are having to do their own publicity."

Seeking publicity is not a responsibility that many authors are prepared to take on. The ones with some money to spare hire their own publicists, a practice that has increased dramatically over the past years. If authors can't afford that, they may still feel compelled to do something since their chance of publishing another book usually depends on the success of the previous one.

"It's harder to sustain a literary career, and the general run of authors are less shy about publicizing themselves than they were perhaps 20 years ago," says Thomas Mallon, an author and critic who has been on numerous book tours and was the literary editor and books columnist for Gentlemen's Quarterly. "Publishing houses give up on writers after a few books -- quicker than before. It's more of a profit margin now. The idea that an author is stepping down from lofty perch of Parnassus to wallow in the marketplace isn't a feeling authors [can afford] anymore."

Compounding the problem are all the competing media -- the Internet, movies, radio, television and other modern diversions. It has become more difficult for publicity departments, let alone authors, to make an impact.

"The biggest change in publicity now is that to reach the same number of readers you need more publicity," says Paul Bogaards, senior vice president and executive director of publicity at Knopf. "Before, a few central thrusts could help launch a book. Now the question is, how much the publicist needs to do to break through the noise of our culture."

Which may sound like certain doom for authors who aren't well heeled or who publish at smaller presses without publicity departments, but some writers have managed to overcome these obstacles.

After Neal Pollack published his "The Neal Pollack Anthology of American Literature" with McSweeney's Press, he devoted the next two years to a shoestring promotional tour. He sold books from a backpack and got noticed by giving a reading in a men's room in a Philadelphia train station, at a ticket window in front of Boston's Fenway Park, while standing in the fountain at Washington Square Park in New York and in a deli in Ann Arbor. He also used the Internet by keeping an amusing tour diary on the McSweeney's Web site. His efforts eventually worked; the paperback was published by HarperCollins last March.

"What I did was a primer on how to pull a book tour out of your ass," he says. "I'd do anything to get attention for the book. You have to have some kind of gimmick, something that distinguishes you from the horde. Lots of times the prose won't do it by itself."

And in the end, even the most ingenious promotional efforts may backfire. "In an ideal world, books would speak for themselves, but the problem is, there are so many books now," says Bob Minzesheimer, who writes features and reviews for USA Today. "My suspicion always is that a gimmick implies that the book can't stand on its own. "

Even an author who is sent on the road by a big publishing house often discovers that acclaim can be elusive. Mallon characterizes his own touring as an author as both "discouraging and comical," and he has written essays and articles about the experience.

"One time I had only one guy show up for a reading," he recounted. "We had coffee for the better part of an hour, talking about writing and the book. Then he left without even buying it."

Yet for many authors a full-fledged tour, traditional or gimmicky, isn't possible, either because of temperament or because of circumstance. Pittsburgh author Jennifer Bannan, whose first story collection is being published by the Carnegie Mellon Fiction Series this winter, is married, has a new baby and works full-time for a technology marketing company. She hopes to transfer her marketing skills to promoting the book, and plans to contact book editors at newspapers and magazines and to schedule weekend readings in cities where she has friends who'll give her a place to sleep.

"I can't exactly drop everything to tour for years and I don't think my husband or the baby would enjoy a reading in a bathroom," she says. "Maybe I could change the baby on stage while reading. That might create a buzz."

In addition to all the books put out by large and small publishers, the proliferation of both vanity presses and print-on-demand (POD) services over the past few years now allows anyone to bequeath his or her words unto the world.

Teresa Weaver, book editor of the Atlanta-Journal Constitution, says that over the past few years an "incredible volume" of self-published and POD books have arrived at her paper's office. At the same time, she says, direct requests from authors for reviews of their books have doubled, and "some days it feels like it's quadrupled." E-mail in particular has made it easy for authors to contact members of the media quickly, cheaply and repeatedly, which, Weaver noted, "is good from their point of view, bad from mine."

Elizabeth Taylor, book editor of the Chicago Tribune and president of the National Book Critics Circle, says that approximately 20 percent of the books her paper receives (out of about 100 total per day) are from vanity presses or POD authors, and many of them are inappropriate for the paper. "Some books look like they're mimeographed in the basement," she says. "Or they're sweet little books about all kinds of crafts or knitting, but not something we'd review."

Book editors complain that authors often ignore the fact that their books are completely inappropriate for the publications that they inundate with requests for reviews. "Not a day goes by without an e-mail from self-published authors," says Minzesheimer. Overall, he sympathizes with the authors. "It must be such a frustrating thing, which books we pitch is so arbitrary and hard to figure out." But, like most book review editors, he says that pitches straight from a book's author tend to turn him off to the book, no matter who publishes it. "I always think if I'm hearing directly from the author, it's not a good sign."

Jonathan Yardley, book critic for the Washington Post, says that a couple years ago he'd already written the draft for a review when the book's author contacted him in a "direct and smarmy way." He replied that had the author contacted him before he'd written the review, he wouldn't have reviewed the book at all. "I always reject such overtures," he says, "I really, really, really don't like authors to contact me."

He's not alone. "With a publicist," says one book review editor who wished to remain anonymous, "I can be relatively frank. She's a professional who understands that not every book is right for us. With the author, it's trickier. How do you tell someone that his or her baby is simply terrible? Sometimes, though, an author is so persistent that you wind up having to telling them something pretty close to that. Ugh."

Yardley says that the relationship between publicity and marketing departments, and reviewers and book editors -- with whom critics like Yardley have regular contact -- is a useful business relationship that acts as a sort of test, or "a sieve, a filter, to the process" of selecting which books to cover. With self-publishing, the only test the book has to pass is whether its author's check clears.

"It's a real problem because more books are coming at us," Yardley says. "They haven't passed any test. And the question is, 'Do you have enough time to filter through all these?' The answer is no ... As to receiving all these books, it stopped being Christmas every day a long, long time ago. It's a pain in the ass."

Laurie Muchnick, book editor of the Long Island newspaper Newsday, says that she has also noticed an increase in self-published books over the past two to three years. She used to tell authors that Newsday had a policy of not reviewing self-published books because their readers couldn't easily buy them. Now that it's possible to get a book widely distributed through outlets like Amazon.com and other online sources, that excuse is "no longer valid."

Many self-published authors consider the book editors' skepticism regarding their work to be prejudice, a sort of conspiracy to uphold the status quo of recognized publishers. Unfortunately, the books themselves don't do much to support that argument. "There are enough really bad books published by major publishers," Muchnick says. "And most self-published books are worse than that."

But despite the stepped-up intensity of direct promotion from authors, book editors and critics do not foresee a climate where only the loudest and flashiest will be reviewed or noticed.

"I'd be a little bit surprised if work of real merit is getting lost out there," says Yardley. "I've always said there is no such thing as a really meritorious book that can't get published."

Christopher Dreher is a writer living in Plymouth, Massachusetts.