As a mother battles cancer, her daughter turns to cigarettes for comfort. 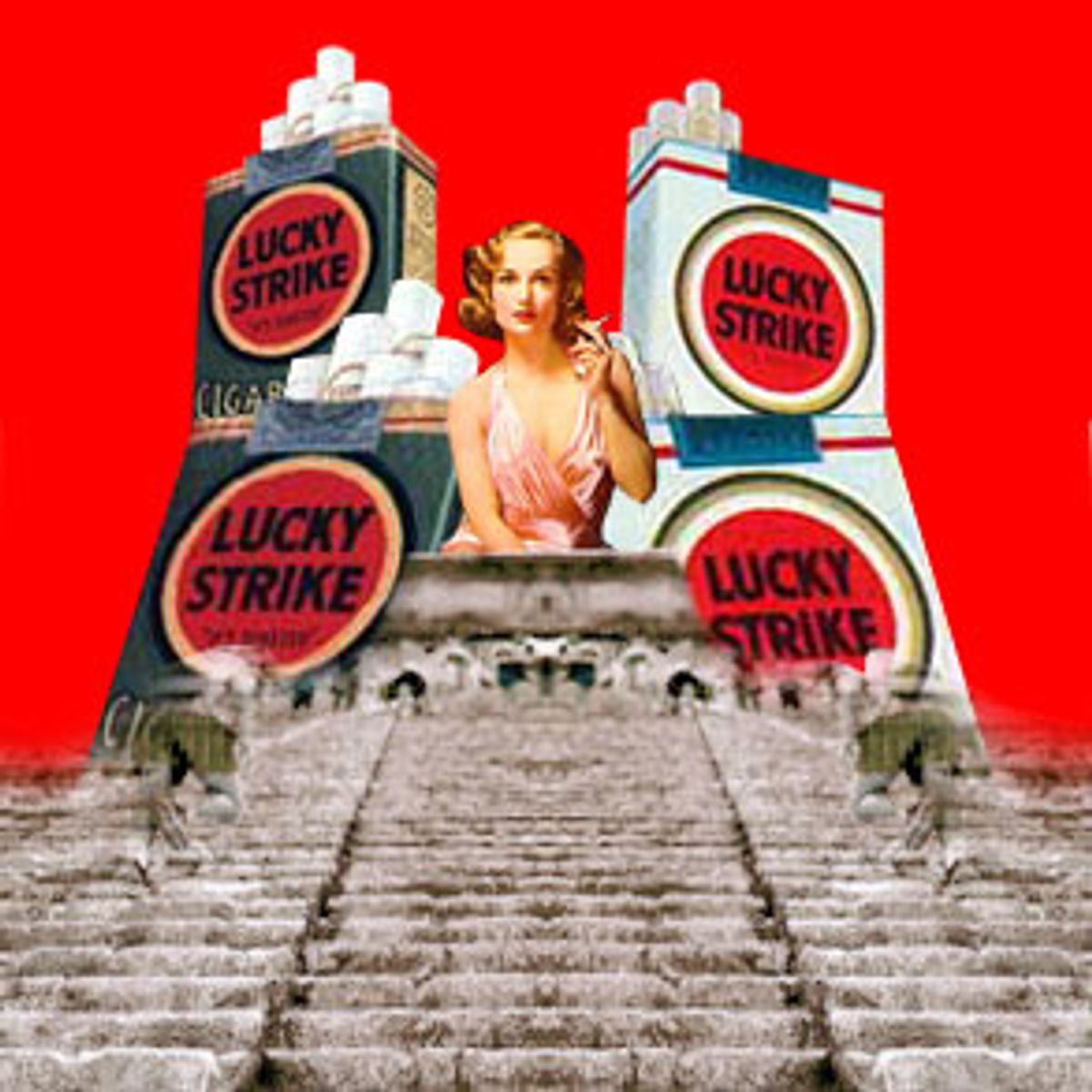 The first time I tried talking to my mom about her cancer she said, "Hamper? What hamper?" When I repeated, more clearly this time, "Cancer," she shrugged and said, "You know what I was thinking about? When I was a little girl and I went to my uncle's farm. I slept on the hay and milked the cows. There were acres and acres of green fields. I was happy then."

That was Stella. Wandering a green field of denial, Lucky Strike cigarette in one hand and a rum and Coke in the other.

There was a phrase I heard once that delighted me because it confounded me: Black is the absence of all color. Growing up, I was the absence of Stella. We weren't just night and day -- we were Haagen-Dazs to Turkey Hill Frozen Delights, Rachmaninov to Liberace. Every kid wanted June Cleaver. I got Lucille Ball -- with attitude. Stella got these urges. And when she did, god help us. If Sears had a sale on gray paint, she'd buy six cans and proceed to paint every white surface in the house, including the kitchen cabinets, the kitchen sink and the bathtub. For months after, I'd sit in the tub with my yellow ducky, slick with gray, bobbing in the oily surface that comes when you slather enamel with the wrong paint.

Once, she bought me a pony. Every little girl's dream, right? I'll never forget the sight of my poor dad's face the night he came home after a hard day at the chemical plant to find Baby the pony tied to the oak tree in the front yard. There was no hay, of course. No grain to feed it. No stable. Just Baby, tied to that tree. Stella had bought him for $50 from a drunk in the bar with a hard-luck story. That was Stella, all heart and inspiration and to hell with the consequences.

Cancer, though, has consequences. Not even Stella could wriggle out of that. Neither could I. When she got sick, I was living the high life in New York City, an executive with a corner office and a neck-craning view of the Hudson. It was a different kind of green field, buttressed by concrete and hazy with exhaust. My mother's cancer gave me the opportunity to change all that, to come home -- to the fabulous Jersey Shore.

So there I was. Cloaked by a chilly late winter, trapped inside with a crotchety 81-year-old woman lugging around an oxygen tank and a bad attitude.

I did the only thing possible: I started smoking.

Until then, I'd been an adamant nonsmoker, the kind who gleefully threw away other people's cigarettes and gave hell to smokers who dared puff in my presence. I knew all the statistics. When it came my turn, I embraced my new habit with gusto. Cigarettes became my new best friend.

My mother smoked every day of her life for 65 years. When I was a child and lost her in the store, all I had to do was listen. When I heard the coughing, I followed the trail to Mom. Even crippled by cancer, she still craved her nicotine. And now, so did I.

Whenever I could, I'd sneak outside like a guilty teenager, prop my feet on the porch railing and watch the waves pound the shore, one cigarette in my hand and another smoldering in the ashtray. Instead of Prozac, I had Parliament Lights. That sweet inhale was the only thing that got me through a day with Stella, wrapped tight in her ratty afghan, her only source of amusement Regis and Kelly, Rosie and Oprah. And me.

The day she came home from the hospital was the day it finally hit me. For the first time in my life, another human being was completely dependent on me. My mother was helpless as a newborn, confused and in pain. Any thoughts that this would be a lark were erased the first time I changed her diaper.

Holding onto your own mother, naked in the tub, as afraid of the warm water as she once was of running out of cigarettes, is a sobering moment for a daughter. As I carefully washed her wounds and awkwardly maneuvered her birdlike body out of the tub, I thought, This is what my body will look like. This is my future. My second thought? Who will be there to take care of me?

I'd always considered myself capable. Strong. After all, I ran a department in one of the world's largest media companies. But it didn't take but a day for me to admit that housewives and mothers had the most grueling jobs in the world. Back in the city, I'd take a cappuccino break at 10 a.m., to chat with my co-workers about the latest exhibit at the Met. Now, by midmorning, I'd already gotten my mother roused from a fitful sleep, figured out which medicines to sneak into her oatmeal, dressed her, done the dishes, gone food shopping -- and started planning for lunch.

Mom: What's this?
Me: It's bean and vegetable soup. I made it from scratch.
Mom: I hate soup.
Me: You love soup. I made it just the way you used to. Just taste it. You'll like it.
Mom: I want ice cream. And a cigarette.

My mom didn't stop smoking until she went into the hospital, and then it was only because we wouldn't buy her cigarettes. Smoking was her religion. She was the Mother Teresa of the Temple of Lucky Strikes. "I don't even want to smoke," she insisted during our stay together. Until the morning I came downstairs to find a lit cigarette in her hand - and her oxygen tank turned to high. "I just want to take one hit," she said, refusing to hand it over.

One of my earliest memories from childhood was my mother's morning routine: a cigarette and a cup of coffee to greet the day. Now, it belonged to me. Strangely, it made me closer to my mother than anything else ever could. At last, after years of trying, I finally understood something about Stella.

Most days, we just talked, which, for us, was unusual. Before the cancer, our conversations were pretty much limited to: "You gotta eat more lasagna. The cheese will keep you regular." Now, she'd remember a good day from my childhood or the way my dad liked to call me Lady Jane. One Sunday she even made it with me all the way to the ocean's edge even though she "never did much like the beach." Small victories. As good, and as easy, as a slice of pie.

After nearly two months, and despite my cooking, my mother was well enough to return to my sister's care, freeing me to return to my life in the big city, to my own green field of denial. Before I left, she told me she loved me in the only way she knew how. She shrugged and said, "I got used to you. But you have to go, right?"

A few months later, we celebrated my mother's 83rd birthday. She was strong enough to beg me for a cigarette when she caught me outside, sneaking one for myself. I looked at her -- a gnarled, white-haired child -- asking her baby daughter for the one thing left that gave her any real pleasure. I hesitated, and then shook one from the pack.

That night, Stella went into the hospital. Three days before Christmas, I was called to her deathbed.

It was the longest night of the year -- December 21. They played an endless loop of Christmas carols at the nurse's station. I tried to say all those things they say in the movies over the words of "Rudolph the Red-nosed Reindeer." It was a moment Stella would have appreciated.

Just as I did when I was a child, I laid my head on her breast, close enough to hear her heart beat, as soft as the flutter of wings.

When she was finally still the nurse came and I asked for a moment. I peeled off all the band-aids stuck to her skin, as thin as crumbling parchment. I combed her hair. She never wore it neat. This was my own small triumph.

My brother came for me and we went outside. Dawn was breaking, bathing everything in a steel gray. I thought of that tub she painted and laughed. Then we each lit a cigarette. For Stella.

Dawn Shurmaitis is a freelance journalist and screen writer in Jersey City. Two of her stories on volunteering at Ground Zero were published in the book "09/11 8:48 AM."