A clever, witty debut from a bright filmmaker. Now just ditch the Holden Caulfield clone, dump the in-jokes and give us some feeling. 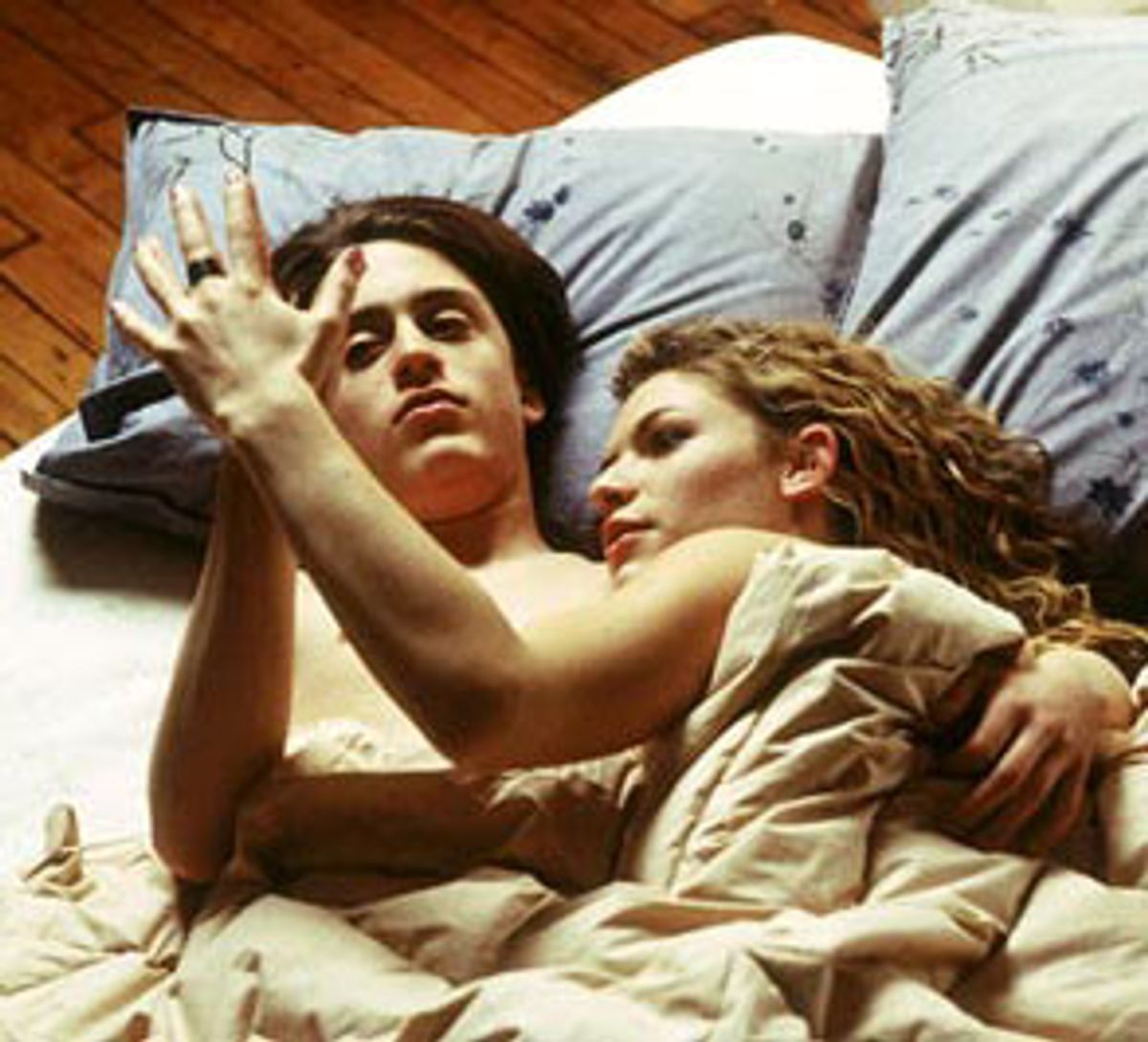 "Igby Goes Down" is clever, witty and intelligently made. It's also utterly baffling. The charcoal-toned comedy about a highly privileged but troubled young man (Kieran Culkin) carries you along on its magic carpet of smug amusement, only to eventually drop you -- nowhere. Everywhere you look, there are wonderful actors -- Susan Sarandon, Bill Pullman, Claire Danes -- delivering snappy lines or (especially in Pullman's case) cluing us in, subtly, to their inner suffering. But "Igby Goes Down" is far too taken with its own rumpled-chino stylishness to be genuinely affecting. Arch and cleverly poised, it never lets its guard down as much as it needs to. It's like a charming bon vivant who, trying to chat you up in a bar, feigns interest in you even as he or she keeps glancing over your shoulder in case someone more interesting, or just more something, should happen to wander by.

In the movie's first few minutes, we hear the belabored breathing of a woman who's clearly on her deathbed, accompanied by some whimsical music on the soundtrack, just so we know it's OK to laugh. That woman turns out to be Mimi Slocumb (Susan Sarandon), a rich, spoiled matron with a heart that's seemingly harder than a five-day-old Payard pastry. Her two sons, Oliver (Ryan Phillippe) and Igby (Kieran Culkin), dressed in properly preppy-disheveled navy blazers and striped ties, attend to her, essentially doing her in with a plastic bag. (This is where the whimsical music really comes in handy, a prelude to the darkly comic sight of Mimi's eyes opening wide and her perfectly lipsticked mouth rounding into an "O" of astonishment as she draws her last breath.) Why Mimi's kids are offing her, exactly, we don't yet know, but without even needing to look at the diagrams on the card in the seat pocket in front of us, we know we're in for a wry little picture about the adventures of rich people who, for the most part, are not like you and me.

That's partly because the rich can afford to be eccentric and troubled and unglued and everything in between, which means they're often great subjects for moviemaking. And Igby, especially as Culkin plays him, is at the very least a good subject. No wonder he keeps getting thrown out of the posh boarding schools his mother keeps plunking him into: He repeatedly questions authority, makes things up and generally doesn't bother with anyone who's full of baloney, which is basically everyone. Aside from the fact that the character has been a standard model since the days of Holden Caulfield, you understand almost immediately why he's so mixed up: Mimi is a chilly, distant, controlling mom to whom Igby may as well be a Martian. She's much more attuned to Oliver, who has whizzed through prep school and is now happily ensconced at Columbia, on his way to getting a good job, marrying the right girl and raising a family of towheaded saplings somewhere in Connecticut.

Oliver, wearing his thatch of ultrablond hair like a crown of world supremacy, professes to understand life, money and the way things work much better than Igby does, and is always imparting useful information in his Mr. Howell lockjaw diction. (Phillippe carries himself as if his mouth were his only movable part; he isn't a subtle enough actor to make the distinction between playing a wooden character and giving a leaden performance.) Culkin, on the other hand, is more like his father, Jason (Pullman), a man who built a fortune, got everything he assumed he wanted, and slowly, gradually, cracked up.

In an early scene, we see Jason taking the young Igby and Oliver to the movies during the daytime: The picture is George Cukor's "Holiday," one of the most moving pictures ever made about the limits of riches, and it's a nice touch on Steers' part. Pullman is clearly terminally troubled, but there's something alive and vital about him as he steps out of that movie; later we see him as a drained shell of a man, one whom Igby loves dearly and sympathizes with. Igby also has a substitute father figure in the form of crisp, cuff-linked D.H. Baines (Jeff Goldblum), a longtime family friend who has financed Igby's colorfully checkered education, since Jason's institutionalization has drained the family's coffers.

It's no wonder the young Igby is so messed up, and Culkin, with his crooked Peter Pan smile, plays him so sympathetically that we warm to him as much as the picture allows. He has a wisecrack for every occasion: "I'm drowning in assholes," he laments at one point, delivering the line with the right touch of seriocomic despair. Igby's using the lingo of pissed-off and disappointed youth, and it's touching because this is one of the rare times he allows himself to be young: Mostly, he's like a confused little old man trapped in a boyish teenager's body.

But the movie takes twists and turns that distract us from Igby's experience instead of deepening our connection with it. Writer and director Burr Steers (this is his first movie) plunks Igby into all kinds of difficult situations: He falls in love with a smart, eccentric Jewish girl with the name -- and rest assured, Steers milks it for all it's worth -- Sookie Sapperstein (Claire Danes, in a performance that makes the best use of her eye-rolling capabilities but, sadly, not much else). Sookie and Igby share an unspoken connection, a shared knowledge of just how crummy the world is and an understanding of just how to locate the best pot.

But that relationship is fraught with complications, as is the more casual one that Igby forges with Rachel (Amanda Peet, giving the characteristic Amanda Peet performance -- in other words, one that's lacquered to a hard, empty shine with endless coats of nail polish). Rachel is an alleged dancer who's renting a studio space from (and, of course, sleeping with) D.H. When Igby runs away from a hateful military school, Rachel's Manhattan pad becomes his retreat, and whenever he drops by, Rachel is lounging around in Edie Sedgwick-like outfits that consist of tops and tights but no pants, consorting with her artist-slash-drug dealer friend Russel (Jared Harris, in the movie's funniest and most offhand performance). Igby likes them, but he's too smart to fall for their seedy pseudoglamour: Military school may have been a harsh and hollow world, but there, if nothing else, people know enough to walk around in pants.

Poor Igby has little to do but work around everyone else's quirks and foibles and bad behavior. At least the movie doesn't make the mistake of turning him into a limp victim. He's bratty enough himself that you sometimes want to swat him.

But Igby's biggest problem is that he's lost in a forest of ironic quotation marks: They're draped as lavishly and casually around the movie as Salvador Dali's melting watches. This is supposed to be a good thing if you're trying to attract a hip, knowing audience. But courting a hip, knowing audience isn't the same as making a movie that allows us to crack its shell to get to the real feeling inside. Igby describes Rachel and Russel as, respectively, a dancer who doesn't dance and an artist who doesn't paint: "It's like a boho version of the Island of Lost Toys."

That's a clever, sophisticated line, one that rings off the rim of a martini glass or a bong with an equally assertive ping. But how many dry chuckles can one movie give us before we recognize that there's almost nothing there but dryness? "Igby Goes Down" is hardly a failure: You could argue that it's better for a filmmaker to err on the side of crispness than to give in to sappy emotion, and you'd be right. But you want Igby's journey to count for something by the movie's end -- something a little deeper than the message that a mother's love is important, no matter what kind of love it is. Steers is a bright and stylish filmmaker, but Igby knows something he doesn't: Sophistication will carry you only so far. Past a certain point, you've got to just get out of the Town Car and walk.