How greedy was my Valley? 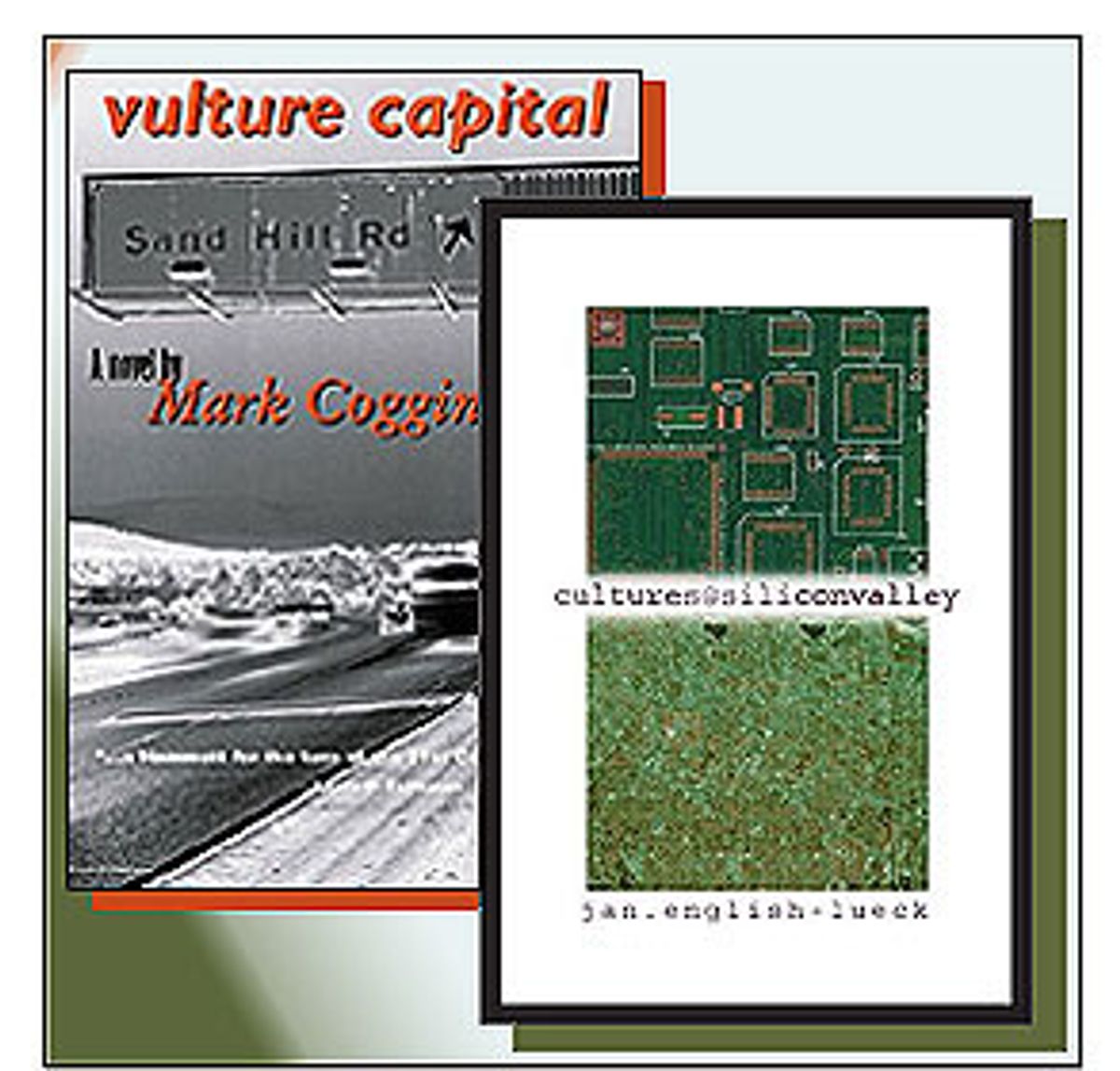 Like an ebb tide that leaves little behind save rotting seaweed and dead fish, the national obsession with all things Silicon Valley has drained away, replaced by a grim fixation on Enronitis and Jack Welch's divorce. But for those of us who live in or around its environs, or are still caught up in quaint techno-fascination, the quest to understand the Valley continues. Never mind that the exercise now sometimes seems more like picking a scab than uncovering the ineluctable Future of Capitalism. The itch must be scratched; the Valley is still there, even if Excite and Webvan are not.

But now that the dot-com era no longer provides easy headlines -- "a new millionaire every six minutes!" -- and PC sales are flat, the question becomes, how best to seek the essential nature of the Valley zeitgeist? Mark Coggins, a budding hard-boiled mystery writer, chooses a fictional approach in "Vulture Capital." His book gives us a Valley of noir glamour, a trip through the dark satanic mills of venture capital with Chandler or Hammett as tour guide.

J.A. English-Lueck, chairwoman of the Department of Anthropology at San Jose State University, treads the less exotic route of granular reality in "Cultures@SiliconValley." Her observations, built on meticulous survey data and hundreds of interviews, explore a terrain of confusing cultural diversity in which every action is mediated by technology and subordinated to the imperatives of work.

Oddly, at first glance it is Coggins' fictional portrayal that comes off as more evocative of the "real" Valley, while English-Lueck's dry nonfictional treatment sucks the life right out of the place. This is despite "Vulture Capital's" near science-fictional plot twists and action-thriller conventions (Hollywood, are you listening?) and "Cultures@SiliconValley's" abundance of quotes from actual people.

But the comparison is unfair, because the two authors are attempting very different things, one of which is far more difficult than the other. Coggins is working over familiar ground, deftly using the tropes of classic private-eye fiction to give readers a cold, delightfully nasty look at the venture capitalists who rode to fame and glory on the tech boom. His eye is sharp and the details are crisp; while not quite a stylist of Raymond Chandler quality, the inevitable comparisons aren't misplaced. From the boardrooms of Palo Alto to the wineries of Napa, "Vulture Capital" gives us Northern California in the 21st century, as noir as it ever was.

English-Lueck's job is far more challenging. Eschewing the easy plotline of "venture capitalist screws start-up innovator," she grapples with the complex, ever-changing task of determining the nature of the new society being created in the Valley. What does it mean, all these engineers and product managers running around with Palm Pilots and cellphones, working flextime and hopping from company to company like epileptic bumblebees? How is a new cultural identity emerging from the mix of races and classes and lifestyles swirling through the nondescript towns of Sunnyvale and Cupertino and Santa Clara and Milpitas?

Useful and/or entertaining for very different reasons, both books share a central insight: that despite the ever-changing fortunes of the technology sector and the fickle attention of headline writers, the Valley goes on, through boom and bust, providing grist for both fevered imaginations and sober contemplation. Coggins takes the low road, with sex, violence, evildoers and cyborg chip implants. English-Lueck takes the high road, painstakingly laboring through an exploration of the "twin processes of identity diversification and technological saturation." Together, they demystify, and end with the same question: What's next?

It wasn't until after I zipped through "Vulture Capital," turning pages as fast as my fingers would allow, that I learned that Coggins was a veteran of the tech industry, that he had worked as a director of developer relations at Netscape, and that he had recently surfaced from a failed dot-com called ShortCycles, a classic late-90s start-up that based its business plan on the premise that money could be made by automating the organization of sales and marketing presentation materials.

I was surprised, but not at the facts of his background -- the details of boardroom skulduggery and Silicon Valley start-ups were too on the money to have been easily concocted by an outsider. Po Bronson, for all his talents, did not catch the Valley's entrepreneurial/venture capital lifeblood in "The First Twenty Million Is Always the Hardest" as unerringly as Coggins does in "Vulture Capital." The surprising part is how well Coggins writes -- it's not what one expects from someone who used to flaunt such job titles as "vice president of products."

"Vulture Capital" is billed as an "August Riordan mystery" -- the second in what looks to be an ongoing series. Riordan is the private eye. But the protagonist in "Vulture Capital" is Ted Valmont, a venture capitalist. Valmont is not a very likable guy. He's slick, whiny and exactly as mean as you would expect a successful venture capitalist to be. His life, which includes browbeating CEOs, sipping wine and driving a Ferrari Spider, is not a happy one. His ulcer alone is testament enough that there is something rotten in the Valley.

It's the stench of greed. Where previous treatments of the Valley, in both fiction and nonfiction, usually try to capture the glory of start-ups making the big time, of Silicon Valley as the locomotive of the global economy, "Vulture Capital" is a post-bubble novel. Riordan aside (and he's practically a bit player, anyway), Coggins' characters are neither heroes nor role models. They are simply greedy scum who will do anything to get the big bucks -- perfect material for neo-noir.

Illustrated with photos of "For Lease" signs in front of the offices of Excite and Gazoontite, "Vulture Capital" captures the moment, with plenty of vim and vigor. And never mind the seemingly unbelievable futurism of the chip implants; Silicon Valley, to all practical purposes, is science fiction. Somewhere down in Mountain View, someone is surely cooking up something truly horrific.

"Cultures@SiliconValley" either ignores or simply misses the corrosive effect of greed on the local culture. Perhaps that's because the focus of English-Lueck's research is on the everyday people of the Valley -- the employees and middle managers rather than the financiers and go-go entrepreneurs. There are no echoes of the crash of 2000, which gives "Cultures" a slightly archaic feel, as if reading an ethnography of some isolated tribe in New Guinea, before Westerners began arriving and shaking everything up.

But that's not necessarily a flaw, because the investigation English-Lueck is conducting delves deeper than the surface to-and-fro of the boom-bust business cycle. Venture capitalists, CEOs and IPOs get the headlines, but English-Lueck is looking at how people actually live, how the cultural interplay of Chinese and Indian and Mexican and Anglo-American resolves itself in the high-pressure, high-stakes cauldron of the Valley, how the 24/7 nature of work in the high-tech world warps families and schools and friendships.

Others have covered how technology mediates every aspect of life in a hive of "early adopters" like Silicon Valley, but English-Lueck has a nice eye for detail: "'My batteries must have been dead' is the new white lie of the information age," she writes, and it's hard to tell if the observation comes from her own experience or her survey data. The impact that telecommuting, working in teams across international time zones, and always-on connectivity (whether e-mail or cellular) have on demolishing the difference between work and home is also a familiar theme, though more devastatingly documented here than anywhere else.

The more provocative observations have to do with the cultural integration being pioneered in the Valley. Identity in "Cultures@SiliconValley" is not limited to ethnicity; class, sexual orientation, hobbies and even choice of favorite computer operating system all play a part. Some people are Linux geeks before they are Hindu, and vice versa.

While ethnic diversity is by no means unique to the Valley, it might be possible to say that overt consciousness of such diversity and its potential value is at a premium in the Valley. English-Lueck describes corporations that aggressively seek to diversify their employee base, not out of a desire for fairness or because of affirmative action principles, but to be more competitive, to be better able to understand the needs of foreign markets and the sensitivities of foreign clients. In this sense, Silicon Valley is destined to be no melting pot, but rather a test-bed for how to engage other cultures without submerging one's identity.

Is Silicon Valley replicable in other places? Is it an isolated oddity, or the leading edge of a worldwide transformation? English-Lueck poses these questions, but doesn't answer them with authority. How could she? The final chapter in this mystery has yet to be written. What is clear, however, is that the social transformations she illuminates haven't stopped just because the NASDAQ stopped soaring. The last couple of years may have been very, very bad for the venture capital funds of the Valley, but the locomotive is still chugging, albeit at a slower pace.

Which means, undoubtedly, that more books are yet to come. But probably not until 50 or 60 dissections of Enron and WorldCom get in the way.