U.S. security agencies had signals years ago that foreshadowed 9/11. But the White House and key intelligence officials don't want to talk about it. 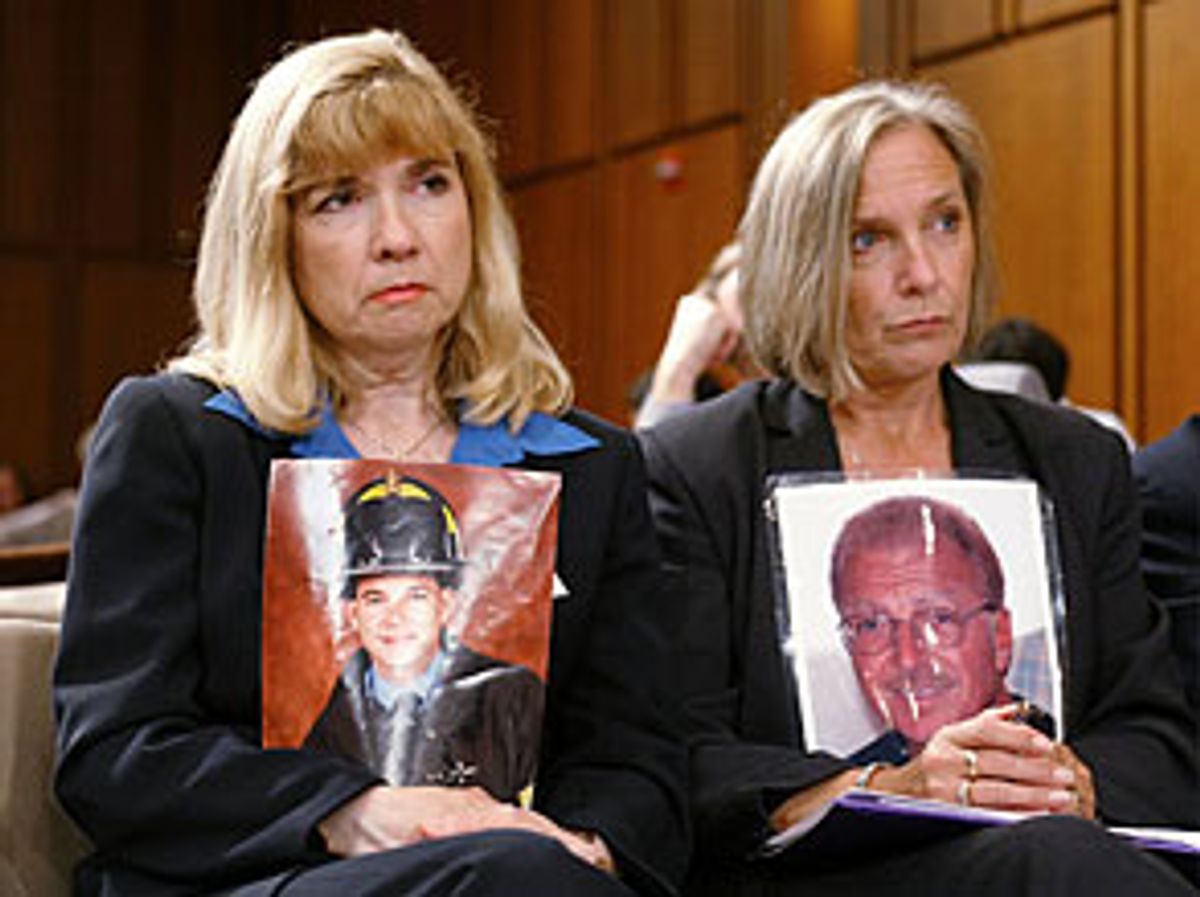 As administration officials appeared on Capitol Hill Wednesday looking ahead toward America's next war, the House and Senate intelligence committees held their first public hearing looking back to the intelligence failures preceding the attacks of Sept. 11 and whether or not more could have been done to stop them.

Among the most chilling revelations from the joint committee's probe were the warnings, dating back to 1994, that terrorists associated with Osama bin Laden and al-Qaida were considering using hijacked airplanes as weapons to fly into government and high-rise buildings. The World Trade Center was named as a possible target for a hijacked plane as far back as 1998. And since the attack, the committee reported, both the Bush administration and key intelligence officials have been less than fully cooperative in the investigation.

The disclosures in the committee's 30-page report stand in stark contrast to statements made by the White House in May. Then, National Security Advisor Condoleezza Rice and White House spokesman Ari Fleischer said that while there had been increased "chatter" among known terrorists in the months leading up to the Sept. 11 attack, the White House had no way of anticipating hijackers would use planes as missiles.

At the time, Fleischer said there had been "longstanding speculation" about the possibility of a hijacking "but not suicide bombers, not using planes as missiles." Rice concurred. "We were looking at something very different," Rice said. Bush had received an intelligence briefing on Aug. 6, 2001, that indicated al-Qaida operatives may be preparing to hijack commercial airliners, she acknowledged, but, she added, officials were anticipating a "hijacking in the traditional sense."

The committee's investigators found that al-Qaida operatives were planning to fly a plane into the White House in 1996. In 1998, the findings suggest, "a group of unidentified Arabs planned to fly an explosive-laden plane from a foreign country into the World Trade Center." In September of that year, there were reports that bin Laden's next attack would involve crashing a plane into a U.S. airport.

"While this method of attack had clearly been discussed in terrorist circles, there was apparently little, if any, effort by intelligence community analysts to produce any strategic assessments of terrorists using aircraft as weapons," the committee report states.

While families of Sept. 11 victims gave emotional testimony before the committee, calling for a more thorough investigation and seemingly looking for someone to blame, the Bush administration is clearly concerned that the blame might be directed at the White House. The revelations in May about Bush's intelligence briefings sparked a round of questions asking exactly what the Bush administration knew about the terrorist attacks and when, and whether more could have been done to prevent them.

In her presentation of the joint committee's findings, staff director Eleanor Hill presented new information that had previously been classified. But, Hill said, the White House has demanded that any mention or chronology of intelligence briefings received by the president remain top secret. "We believe the American public has a compelling interest in this information and that public disclosure would not harm national security," Hill said.

That frustration was echoed by Sen. Bob Graham, D-Fla., chairman of the Senate Intelligence Committee. "I don't see what public benefit that serves," Graham said. "The public should know if the president, or the secretary of state, or the Congress is informed of a piece of intelligence information."

Graham said the efforts to keep that timeline classified may help shield the White House from criticism like that received back in May. But, he said, "the American people in a free, open democracy have a right to know -- particularly when you're dealing with information that is now itself declassified -- who received that information so they can then ask the question: 'What did you do with that information when you got it?'"

Graham noted that much of what remains classified would involve past presidents. The report issued Wednesday goes back to 1982 in exploring the roots and evolution of terrorist organizations and the threat they pose to the United States.

Sen. Richard Shelby, R-Ala., the ranking Republican on the Senate Intelligence Committee, said there was "no good reason not to share" the information the White House seeks to keep classified. But Shelby characterized it as more of an institutional struggle between the executive branch and Congress than a political effort to shield the White House from blame. "I think it's a historical fear of the executive branch to protect everything they have," he said. "This has gone through the imperial presidencies for some time."

The investigators' 30-page report to the committee outlined the historical context and assembled the fragments of intelligence information known before the Sept. 11 attacks. Both Democrats and Republicans in Congress have been critical of the intelligence community since the attacks, saying the security apparatus failed to "connect the dots" that could possibly have stopped the attacks from happening.

Partisans, both Democrat and Republican, looking for someone to blame will find plenty of ammunition in the committee's report. For those looking for something to hang on the Clinton administration, for example, the report mentions that in 1998, CIA director George Tenet "provided written guidance to his deputies at the CIA declaring, in effect, war against bin Laden ... Despite [Tenet's] declaration of war in 1998, there was no massive shift in budget or reassignment of personnel to counterterrorism until after Sept. 11, 2001."

Though the committee, co-chaired by the House and Senate Intelligence Committee chairmen, Graham and Rep. Porter Goss, R-Fla., has been meeting in closed session all summer, Wednesday's hearing was the first session open to the media and the public. The joint committee's staff director, Eleanor Hill, who presented the report to the committee Wednesday, emphasized that the report of the committee's investigation into the Sept. 11 attacks is a work in progress.

But Graham expressed frustration that members of the intelligence community had not been fully cooperative with the committee's investigators, citing a lack of access to key agents and officials who could have valuable information.

The administration has said it supports the committee's investigation instead of an independent inquery into the attacks sought by others. For instance, Sens. Joseph Lieberman, D-Conn., and John McCain, R-Ariz., have a bill pending that would establish such a blue-ribbon commission in addition to the ongoing intelligence committee investigation. In interviews Wednesday, both Graham and Goss said they would be supportive of some form of independent inquiry to supplement the committee's work.

Graham said the joint committee was narrowly focused on intelligence failures pre-Sept. 11, but that failures in other agencies, such as the Federal Aviation Administration and the Immigration and Naturalization Service, should also be examined. That, Graham said, should be the work of an independent commission. "I would support an independent commission in whatever form it might take to continue efforts, and to broaden the various guidelines of this committee's investigation," he said.

Shelby said he, too, would support an additional investigation into the Sept. 11 attacks. "I'm going to support on the floor -- and I believe a majority of people up here will -- a creation of an independent commission that Lieberman and McCain are talking about. Remember, there were nine investigations after Pearl Harbor."

But the effort to begin a new probe may still face some hurdles. Goss, for example, was unclear where he stands on the Lieberman-McCain bill Wednesday. "I would support some type of additional investigation," he said. "But I don't want to commit to any kind of formula or composition of it at this point."