Susan Sarandon and Goldie Hawn have the time of their lives in this joyously randy tribute to two aging rock groupies. 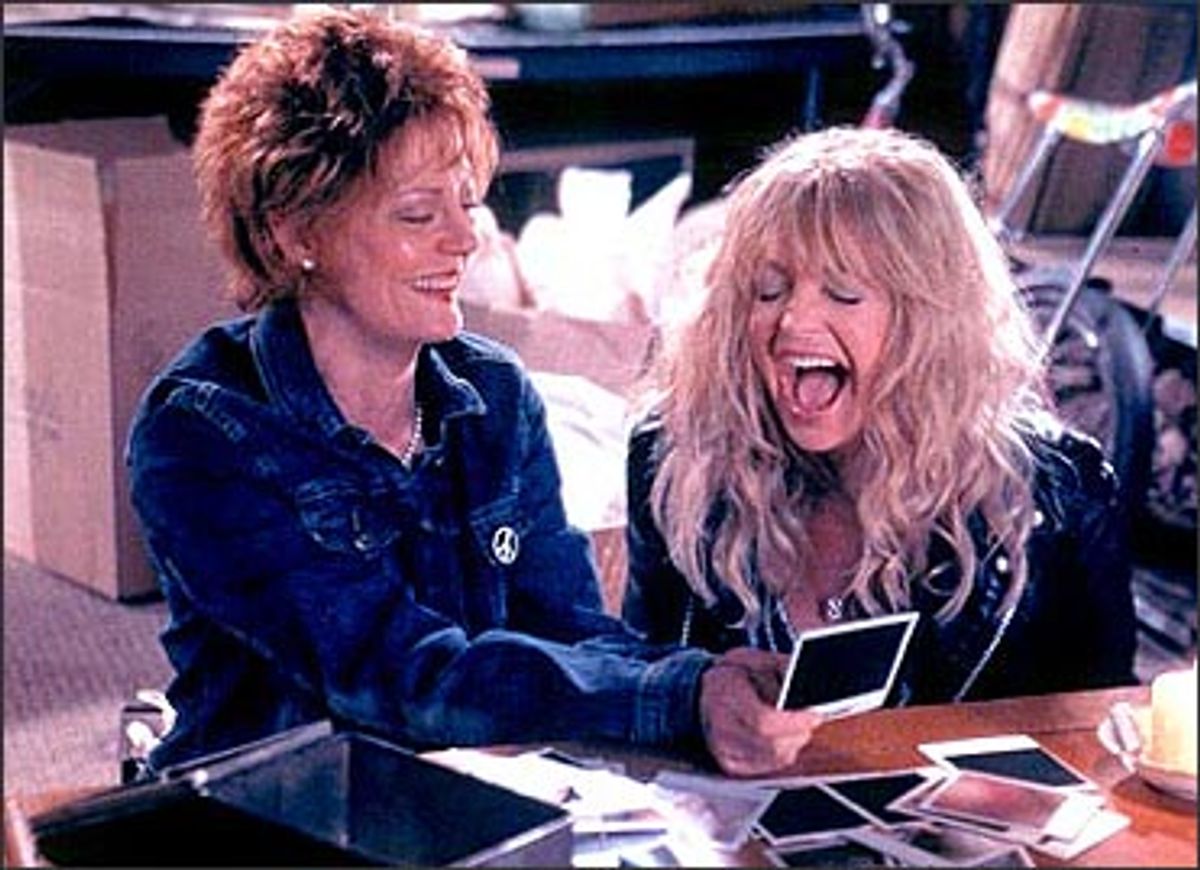 Groupies can't get a break. Men who have never actually partaken of their favors (some film critics, say) as well as, unfortunately, many who have (some rock stars) automatically brand them sluts. By and large, women are probably even more judgmental -- a woman's right to sleep with whomever she pleases is a fine feminist notion, but we shouldn't expect the level of discourse in women's restrooms to catch up with the academic journals anytime soon.

And yet I don't think the essential notion of rock 'n' roll groupiedom -- that a woman could be so turned on by a certain type of music that she's driven to sleep with the guys (or girls) who made it -- is so hard to fathom. Groupies also have their place not just in the history of rock, but in that of the sexual revolution of the late '60s and early '70s. In a 1987 Boston Phoenix review of Pamela Des Barres' memoir "I'm With the Band," one of the best books about rock subculture ever written, Joyce Millman wrote, "If rock stars used groupies, groupies used rock stars right back, wearing them like glittering accessories. These were the A- and B-sides of the '70s rock-and-sex daydream: The boys were bragging about doing it all the time, the girls were bragging about being done to."

"The Banger Sisters" is a highly entertaining and refreshingly nonjudgmental movie about that rock-and-sex daydream 20 to 30 years after the fact. In some ways -- perhaps too many ways -- it's deeply conventional. You can easily tick off all the times it goes off the rails into Hollywood dreck territory: There's a rousingly inspirational high-school graduation speech, and an instance of one character bolstering another's confidence by reassuring her that she's "a force."

But as with so many Hollywood pictures, there's a subtler, better movie lurking within the crowd-pleaser, and in the case of the "The Banger Sisters," it's not so hard to tease it out. Goldie Hawn is Suzette, a 50-ish rock 'n' roll fun girl who, even though she still looks pretty damn good, suddenly realizes she has to reckon with the fact that times have changed.

She also needs money. Although it's not spelled out, you just know Suzette is perennially irresponsible; when we first meet her, she's in the process of losing her job as a bartender at the Whiskey in L.A. After unsuccessfully trying to convince her boss that she's part of the place's history ("Jim Morrison passed out in there one night, with me underneath!" she says proudly, waving toward the bathroom), she slips a leather jacket over her tattooed, finely chiseled biceps, and goes home dejectedly to her apartment, a dusky tapestry- and candle-laden room in which the bed (as in all '60s and '70s rock pads) is the central feature.

Suddenly, she gets the bright idea to seek out her old friend Lavinia (Susan Sarandon), formerly known as Vinnie, her pal in all sorts of rock-related escapades back in the old days: It was Frank Zappa, Suzette explains, who gave the two women the nickname "The Banger Sisters." Suzette hasn't seen Vinnie in 20 years, but she has no compunction about asking her for a loan. So she leaves L.A. and heads for Phoenix, picking up a nebbishy screenwriter named Harry (Geoffrey Rush, in a breezy, understated, hilarious performance) along the way. There she barges in on the comfortable and exceedingly conventional life that Lavinia has built for herself, with her aspiring-politician lawyer husband (Robin Thomas) and two bratty teenage daughters (Erika Christensen and Sarandon's real-life daughter, Eva Amurri).

Lavinia, who has hidden her old life from her family, is none too pleased to see her old friend, and the rest of the movie deals with the way they each have to reckon with their past in relation to the present. Lavinia has willingly become one of those sacrificial-lamb suburban mothers, whose children take her for granted and whose husband, while he loves her, can barely see her for who she is. Impeccably coiffed and outfitted in shapelessly expensive beige coordinates, Lavinia looks with distaste at Suzette in her hothouse Spandex, and you can see why her air of judgment rankles and hurts Suzette.

Director Bob Dolman (who also wrote the screenplay) makes a smart move in allowing plenty of time for the prickly relations between the two to contract and expand: Their unease with each other, and their distrust, don't disappear magically, and you can see both sides. Suzette doesn't understand what a pain in the ass she can be, insinuating herself like a self-centered whirlwind into people's lives. And Lavinia, too anxious to preserve her carefully cultivated exterior, betrays her feelings about her old friend simply in the way she looks at her: You just know she's thinking "floozy."

Watching the two women rekindle their relationship is the great pleasure of the movie, particularly since it looks as if Sarandon and Hawn had a blast together. Sarandon gets the movie's big, revelatory speech, and she carries it off beautifully, despite the fact that it's clumsy and overwrought. Sarandon conveys more truths about Lavinia's character in her carriage and her facial expressions: When her kids finally learn of her past and start teasing her about it, you can practically see the fire in her eyes. She's one of those women who subconsciously decided that becoming a mother meant she no longer needed to be a sexual creature, and in the space of that one small scene, Sarandon shows us Lavinia's recognition of what a mistake that's been.

Hawn is more appealing than she's been in years. There are still some people who need to be convinced that Hawn is an astonishing (and very, very crafty) actress: To that end, her work in pictures like "Sugarland Express" and "Shampoo" speaks for itself. But especially as she's gotten older, Hawn has clearly been seized by the desire to be perceived as the cute, cuddly, lovable baby doll of "Cactus Flower" and "Laugh-In." That's led her to take too many less-than-challenging roles. And while the consensus seems to be that Hawn looks amazing for her age (and her body does look remarkably sculpted), at the risk of sounding cruel, I can't help observing that her current face has become a caricature of her old one: Her most prominent features (those lips! those eyes!) have taken on slightly exaggerated proportions, while the rest of her face betrays a stretched, tight weariness -- perhaps the toll that too many years of trying to be cute will take on you.

Here, Hawn isn't trying to play a character who's years younger -- Suzette is exactly, resolutely, Hawn's age, which may be why the performance is so relaxed and natural. Hawn does have a few unbearably "Private Benjamin" moments: In the movie's last shot, we see her sauntering off into the distance, adorably, her blond tresses bobbing with an unreal cuteness. She's playing a "force" and not a person, which is always a mistake.

But elsewhere, she's the throbbing, slightly swollen heart of the movie -- she's the character who probably feels the most pain, but she lets it show the least. In one early scene, Lavinia shows up at Suzette's hotel room to "apologize" (but not really) for her bad behavior.

Hawn, who has just emerged from the bath, receives her visitor with an air of gracious disdain, leaning back in a chair, her fabulous legs propped up high on a desk, dropping the ash from her cigarette into a glass of water. Those legs are a weapon, a defense; Lavinia and Suzette may have been best friends, partners in crime, but when it comes down to it, Suzette has no qualms about using sex to make her point, whether the argument is against a man or a woman. That's proof of her lack of sexual hypocrisy: She's an equal opportunity slayer of dragons.

In another scene, Suzette comes on to the effervescently nerdy Harry, and although she's persistent, she stops well short of being predatory. She plays the scene as if wanting to have sex were the most natural thing in the world, at any age and at any time, instead of something that women over 50 just aren't interested in.

And that's where the great joy in "The Banger Sisters" lies. Even beyond the fact that this is Dolman's first movie, he isn't a particularly assured director -- you can almost pinpoint the times he swerves away from making the kind of movie he (and we) would like to see and caves in to making the kind of movie that Hollywood has determined that we would like to see. (In other words, one capped off by a soppy graduation speech.)

But if Dolman does one thing absolutely right, it's that he allows these women their wholly unbuttoned sexuality. And it's not that he simply refuses to pass judgment -- he revels in it. In the movie's funniest and most magnificent scene, Lavinia (here, she's the old Vinnie again) and Suzette go through some old Polaroids that Lavinia has held onto, well-hidden, for years.

You probably don't need to be told these are not Polaroids of faces. Suzette and Vinnie flip through them gleefully, their wisecracks zinging, challenging each other to guess which member belongs to which rock star. (When they get to Arlo Guthrie, Suzette flings the photo Lavinia's way: "Oh, that's yours, baby, you take that one!")

The scene has the feeling of an improvised skit, the sort of thing that happens magically when two actresses are having the time of their lives. Their characters aren't merely reminiscing, they're blending their past into their present, and making sure it has a place in their future. Lavinia's kids may think it's gross, but it's none of their business. In their youthful smugness, they must think that Jimmy Page is no big deal. But in this case, mother knows best -- and she's got the Polaroid to prove it.