At long last, Peter Gabriel releases a new record. Is it worth the wait? If you have to ask you're missing the point. 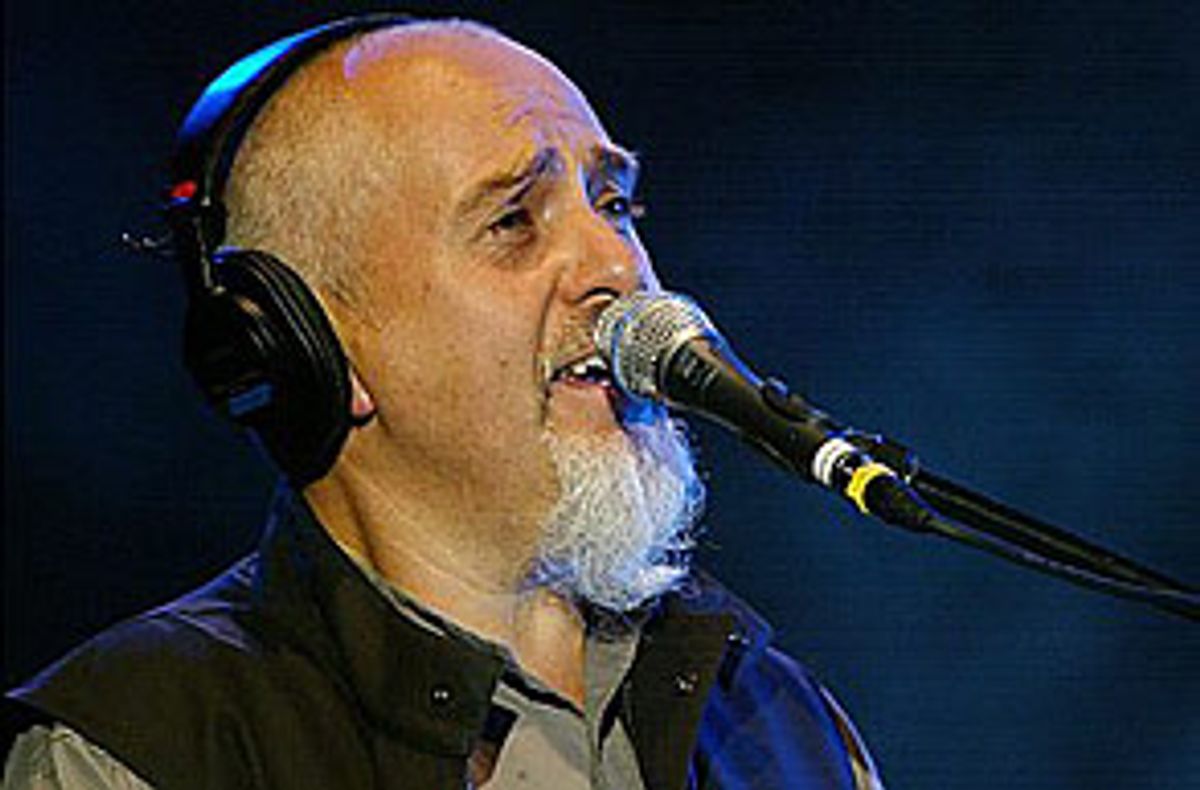 While Peter Gabriel works on his songs, the people most likely to listen to them graduate from high school and college, get married, change homes and careers and sometimes politics, lose parents, let old friends slip away and make new ones, have children, get divorced, remarry or not and otherwise do away with large chunks of their lifespans.

They wait for his next album to be released. Maybe once in a while they check the Internet to see how it's coming. If the chance arises, they ask him. Gabriel hedges. Apropos of his time-tested creative method, he experiments with various excuses: "Deadlines are things that we pass through on the way to finishing"; "We're intending to release in September ... you see I never specify the year"; "Speed is not my strength, diversions are." He tweaks and mixes and masters until finally he has achieved a polished, succinct quip: "Old men take a little longer to get Up."

"Up" is Gabriel's latest "song-based" studio album, which has been a work in progress for the past decade. It is fair to call that a long time -- long enough, actually, to wonder if it is also fair for him to take so long. It's not that Gabriel has been drunk or depressed (well, who knows, maybe he has) or uninspired or lazy. He has been preoccupied. Gabriel is a distractible perfectionist, which amounts to a kind of purgatory for anyone who lives a public life, let alone a creative one. On one hand, his plate is filled with ambitious undertakings: the Real World record label, the interactive multimedia projects, the Womad (World of Music, Arts and Dance) festivals, the film scores, the family, the elusiveness. And on the other hand, the songs just weren't bloody ready until now, damn it.

With his cerebral, hyperfussy attention to detail, his protracted creative gestation periods ("I always get pregnant when I make records," he says) and his tendency to hole up in the English countryside, Gabriel seems bent on becoming the Stanley Kubrick of popular music. Maybe that's not fair -- it's not that Gabriel has come to resent his audience. He just doesn't have qualms about jerking them around. What should be an unacceptable risk in today's pop world has become an essential part of Gabriel's weirdly arty integrity.

Each new album is like a comeback; for his fans, it's like a loyalty oath. Some are willing to wait the mean times out, tiding themselves over on the "expanded packaging" of remastered early work, plus the occasional live album, hits compilation, film soundtrack or audiovisual millennium event. Others try not to indulge him, because they figure he gets plenty of indulgence from himself. Yet wherever and whenever Gabriel resurfaces, there they'll be. Just how did the masked, stage-frightened lunatic from Genesis, Holy Mother of all prog-rock, become an auteur of pop-fan anticipation?

Well, gradually. Gabriel has always been a successful patience-tester. In 1975, just as Genesis, founded by Gabriel with a few high school friends, started gathering mainstream credibility (which is not to say accessibility), the band's fickle frontman abandoned it. He got right to work on a solo album, but took two years to make it available.

As the downtime between Gabriel's subsequent albums grew -- a year, two, four, six and now, 10 -- so did his stature, and yes, the quality of the work. Time has allowed Gabriel to assimilate his interests and influences by trying them on and flapping around in them, like the wacko costumes he used to wear onstage with Genesis. You must understand: It takes a while to reconcile '60s R&B, rock, gospel, synthy British new-wave, avant-garde digi-pop, cyberpunk and the sprawling and gorgeous musical traditions of Africa, South America and the Indian subcontinent, with dignity and without compromise.

He has vented menacing and paranoid personal nightmares like "I Don't Remember" and "Shock the Monkey," sung the range of his politics, from the raw simplicity of "Biko" to the bemused, cheekily demented Kindergartenpolitik of "Games Without Frontiers" to the elegant, utterly convincing empathy for working-class doubt and defeat in "Don't Give Up." The audacious R&B throwback "Sledgehammer" and the quintessential mix-tape valentine "In Your Eyes" helped send "So" to triple-platinum in 1986, and earned Gabriel a huge, international fan base -- to be kept waiting, again, for the tender, fierce and musky confessionals of 1992's "Us."

Somewhere along the line, a protective precedent was established for the reception of a new Peter Gabriel album: If you're disappointed, you're missing the point. Elapsed time having mooted the standards of previous work, new entities should be judged primarily for the happy surprise of their newness, and the avoidance of repetition. Success means you'll actually want to know, "Where's he going with this?"

Most of the songs on "Up" are in the six-to-seven-minute range, and they luxuriate in that extra time, shirking the confines of radio friendliness, methodically unfurling their hooks and hang-ups, false starts and stops, shifting grooves and shimmering open spaces. The music describes something weary and wounded, but in a committed, energetic way. Wearing Gabriel's accumulated experience and confidence well, the album moves very comfortably in a low gear.

It has its share of familiar pleasures, sure: the pristine production, the fine orchestration, the great hooks and greater dynamic range. The adventure of the liner notes, with all that percussion, programming, additional percussion, additional programming, guest artists and exotic instruments. Here, in addition to his usual array of conventional instruments, Gabriel himself takes on the "Wonky Nord" and "Mutator," perhaps because only he knows how to play them. But he knows his limitations too, and leaves the "Supercollider Drum Programming" and "Middle Section Backwards Piano" to others (Chris Hughes and Mitchell Froome, respectively). Mainstays like guitarist David Rhodes, who creates entire atmospheres from single notes; prowling, primal bassist Tony Levin; and the fleet soul-clockwork drummer Manu Katche perform their duties with the usual panache.

"Up" opens into a song called "Darkness," which sets the album's tone and is perfectly dreamlike, slipping easily between what feels first like the churning bowels of some fitful, sinister machine and then the aural expanse of moonless midnight in an exotic garden. It echoes some of Gabriel's earlier work, and to make matters more eerie, some of its chord changes and melodic turns seem to channel John Lennon (this happens again, amazingly and to good effect, in "My Head Sounds Like That").

The loping, lashing commentary of "The Barry Williams Show," told through a put-upon and endearingly contemptible tabloid TV sleaze-monger, is bitterly funny and certainly on target: "Before the show we calm them/ We sympathize, we care/ And the hostile folks we keep apart/ Till the red light says 'On Air.'" Luckily for Gabriel, it doesn't matter how late these observations are because they're still true -- and, for that matter, because the song's deep-digging groove is timeless.

Gabriel's greatest achievement is that his technical sophistication actually encourages a fully organic and man-made sound. For all of the album's well-tempered machinery, you can still hear fingers on a fretboard or drumskins, feet on piano pedals, drawn breath and, of course, voices. If you want to read the lyrics, you'll need a Web browser. But you can always just listen.

The penultimate track, "Signal to Noise," comes closest to making a mission statement, and you don't have to be a tech-geek to get it: "All the while the world is turning to noise/ Oh, the more that it's surrounding us/ The more that it destroys/ Turn up the signal/ Wipe out the noise."

Beyond reiterating his cultural critique in broader strokes, this seems to confirm that Gabriel's impassioned embrace of the information age has taken a toll on his attention span. Yet he somehow maintains his curiosity and stamina. There's a note of hard-won hope in this song (begun, perhaps, in the lovely and poignant outward reach of the previous track, "More Than This"), and then a crescendo to a perfectly planned collision and synthesis of Western and non-Western music. The result is everything you'd expect from Gabriel, even though you're not supposed to be expecting anything, and maybe the uppest thing about "Up."

He quickly recovers. The album's coda, a rending modernist piano ballad called "The Drop," has lines like this: "One by one/ You watch them fall/ No idea where they're going/ But down."

Observers have noted that Peter Gabriel often weighs his words with great and quiet care before speaking them. In conversation it seems like a sign of respect, and maybe that's the idea with the music too. An album every year -- even were he able to do it -- might be too much.

For those of us who work under regular deadline pressure (and when you think about it, don't we all?), Gabriel's modus operandi is infuriating and enviable. He routinely tells interviewers how easy it is for him to start things and how hard it is to finish them. Plenty of us have been there, but of course we haven't had interviewers or fans to explain it to.

While waiting to find out what was up with "Up," inquisitors resorted to cornering and demanding answers from Gabriel's colleagues, like bassist Tony Levin, online. Levin could only shrug; their guess was as good as his. He said that he distinctly remembered laying down a good hundred-plus tracks, thinking they sounded great, and leaving without knowing when he'd ever hear them again, waiting for the call to let him know when the tour would start.

Daniel Lanois, the co-producer, arranger and fellow detailer of the supremely nuanced "So," has observed that Gabriel would be better off recording his albums in the middle of the desert, where distractions could be minimized.

Could they? Gabriel -- the designer of "interactive experiences," bona fide conceptual art fabulist, farmer of high technology and, when he gets around to it, songwriter -- still nurses his dream projects, like, for instance, the ultimate 21st-century theme park, full of "the handmade, the high-tech, and the natural as much as the digital."

Musically, Gabriel has indeed taken to behaving like an experimental architect -- mulling over the basic problems of form, function, civic usefulness, spectacle, the balance of tradition and innovation -- but one who still appreciates comfortable living, thank God. The feng shui in his songs has only improved over the years. Which is why his most dedicated fans feel rewarded for following him anywhere.

If at first "Up" doesn't seem entirely worth the wait, take its maker's example and give it time. You may have to. Who knows when we can expect the next one.