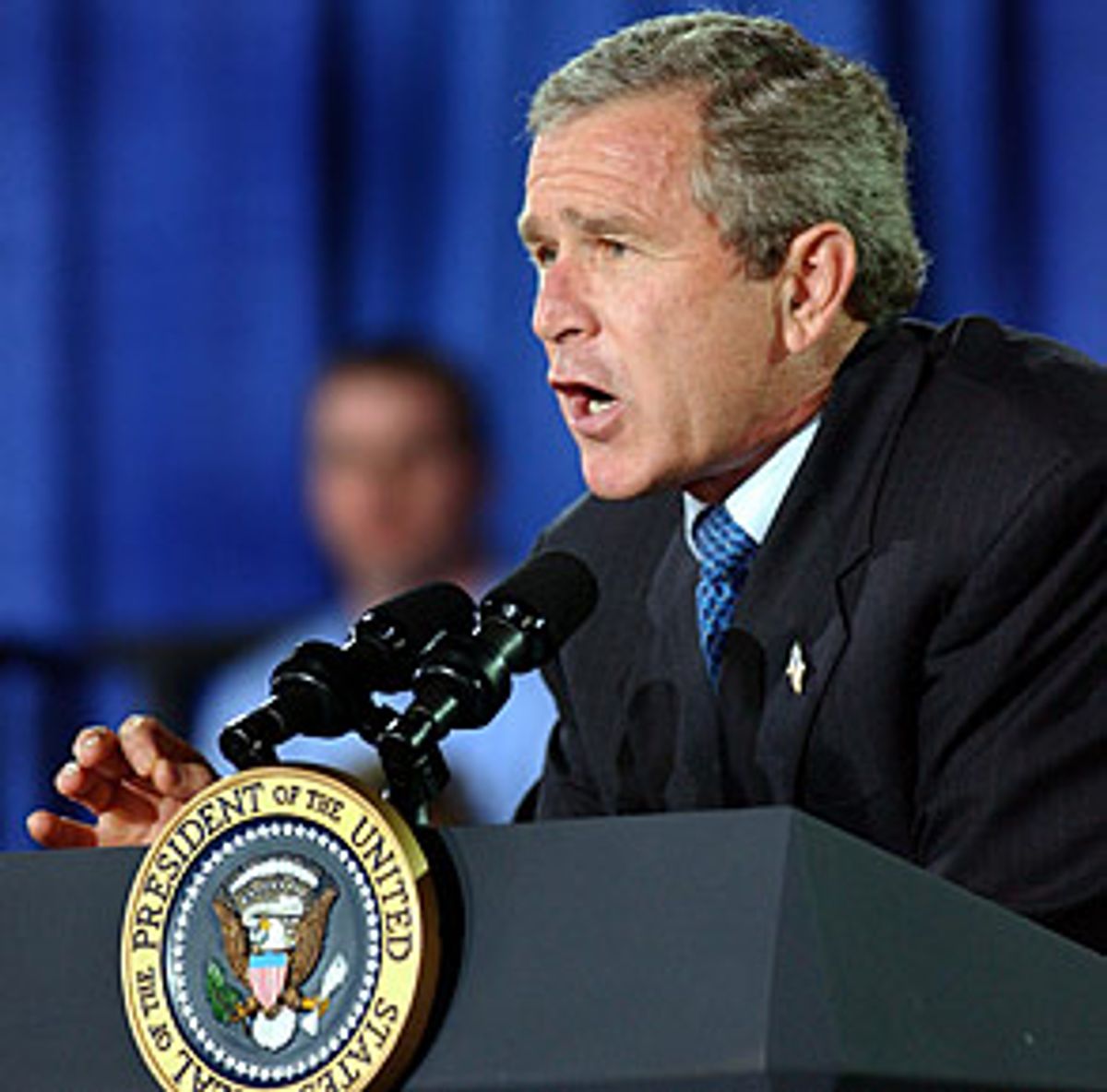 Last week, the Bush administration published a 33-page document outlining an official shift in U.S. foreign policy and military strategy. In the post-Cold War era, the United States would act as a global policeman, willing to take preemptive action against hostile states and terrorist groups that the United States deems a threat to global stability or American interests.

This new policy of "distinctly American internationalism" is the culmination of changes in American foreign policy since the end of the Cold War, accelerated by the Sept. 11 attacks against the World Trade Center and the Pentagon. And, the document makes clear, the Bush administration will tolerate no rivals to the U.S.'s position as the world's only superpower. "The president has no intention of allowing any foreign power to catch up with the huge lead the United States has opened since the fall of the Soviet Union more than a decade ago," the document states.

The global reaction to this new "Bush Doctrine" has been, to say the least, mixed. Some leaders charge that the Bush administration's doctrine of preemptive strikes amounts to a new level of American arrogance. Others dismiss it as a rhetorical device to wage what Bush has called America's "war on terrorism."

Salon has culled reactions from a handful of international editorial writers to the Bush Doctrine, as the administration continues to use its new policy as a justification for a possible future war with Iraq.

Le Monde Diplomatique, France
"We must face facts: A new imperial doctrine is taking shape under George Bush. Now is reminiscent of the late 19th century, when the U.S. began its colonial expansion into the Caribbean, Asia and the Pacific, the first steps to world power. Then the US was seized by great imperialist fervor. Journalists, businessmen, bankers and politicians vied to promote policies of world conquest ...

"U.S. historians have generally considered the late 19th century imperialist urge as an aberration in an otherwise smooth democratic trajectory. The U.S. had emerged from a war of independence to cast off British colonial domination, and had played its part in the Enlightenment project against absolutist continental European monarchies. Surely this experience inoculated it once and for all against the virus of imperialism?

"Yet a century later, as the U.S. empire engages in a new period of global expansion, Rome is once more a distant but essential mirror for American elites. In 1991 the U.S. found itself the only remaining great power. Now, with military mobilization on an exceptional scale after September 2001, the U.S. is openly affirming and parading its imperial power. For the first time since the 1890s, the naked display of force is backed by explicitly imperialist discourse ...

"Bush does not seem to be trying too hard to resist. He is reluctant to invest in nation building or commit the U.S. to humanitarian interventions. But he is quick to deploy U.S. armed forces all over the world to crush the enemies of civilization and forces of evil. His vocabulary, with its constant references to civilization, barbarians and pacification, betrays classical imperial thinking.

"There is no knowing quite what Bush learned at Yale and Harvard, but since 11 September he has become the unlikely Caesar of the new imperial camp in the U.S."
-- Philip S. Golub

Irish Times, Republic of Ireland
"The Cold War threat came from states that pursued a strategy of deterrence. Now, however, the enemy is one who wishes to resort to weapons of mass destruction as a primary tool of attack. Should any such enemy ever succeed, the appalling carnage of September 11th last year could pale into insignificance.

"It is this perspective which is underpinning President Bush's policy of preemptive action. He refers to the 'unique responsibilities' of the United States. They are unique indeed: at the start of the 21st century, the U.S. is the only global superpower, a position that is unlikely to change in the foreseeable future. And that responsibility includes acting in concert with the rest of the civilized world.

"The U.S. says the case against Iraq is clear. The Americans, however, have yet to provide the evidence. There is near universal agreement that Saddam Hussein is a tyrant and evil ruler. Let the president state his case, with evidence, to the United Nations."
-- unsigned editorial

The Observer, United Kingdom
"This Pax Americana that is being proposed -- including its commitment to throw itself into the 'battle for the future of the Muslim world' -- is a curiously old-fashioned one. It is one that has been shared by empires from that of Rome to Britain and the Soviet Union, that says by virtue of its unique inherent values it can educate and save while dominating.

"It is not a new strand in American thinking. From Roosevelt to Kennedy and the New World Order, statesmen have struggled to locate America's sense of its pre-eminent power to effect global change for the good.

"The difficulty, as ever, is that it inevitably encompasses a very partial and contradictory world view. The Bush Doctrine will inevitably be coloured by the prejudices of those who have contributed to Republican foreign policy thinking.

"In this world view, the security interests of Israel and the U.S. are indivisible. Turkey is among the good guys. So is Britain, among a sea of vacillating Europeans. The bad guys are a roll call of troubled states: China, North Korea, Syria, Iran, Iraq.

"It is here that the tensions are most likely to emerge. America may wish to be a power for good in the Muslim world, but it will try to do so from a position of strong uncritical support for Israel and the unpopular Saudi royal family, which will inevitably undermine that ambition and increase and not diminish Muslim suspicions about America's agenda.

"A bigger tension is likely to come from the Bush Doctrine's central tenet: That America, as the last man standing in the old superpower club, must be allowed to call the shots -- an ambition that is in conflict with the internationalism of the U.N. and treaty obligations and negotiations."
-- Peter Beaumont

The Globe and Mail, Canada
"After all, there are dozens of unpleasant regimes, and some of them have weapons of mass destruction. Is the United States ... going to overthrow every one of them? And what is to prevent other countries from claiming the right to pre-emptive attack? If Washington can overthrow Mr. Hussein because he might attack the United States one day, what is to stop, say, India from attacking Pakistan, or China from attacking Taiwan? As former Canadian ambassador Kimon Valaskakis put it on these pages the other day, 'unilateral pre-emptive war in the name of national interest opens up a Pandora's box much more dangerous than the problem it addresses.'

"That would certainly be true if Washington's new doctrine were as sweeping as the worriers say. Thankfully, it is not. No U.S. leader is claiming the right to overthrow every regime that Washington happens to dislike or that happens to dislike the United States. No matter how nasty they may be to their own people, no one is talking about unseating Robert Mugabe of Zimbabwe or even Fidel Castro of Cuba. Why? Because they pose no threat to international peace. Equally, no one in Washington is talking about taking on China or India just because they possess nuclear weapons.

"What the Americans are talking about is something far more limited. Under the emerging Bush doctrine, the United States would reserve the right to take pre-emptive action against a hostile regime if it (a) backed, harbored or conspired with terrorists; (b) had shown clear aggressive intent; and (c) had acquired or was consistently trying to acquire weapons of mass murder.

"Very few regimes are guilty on all three counts. In fact, only one currently is. Iraq has (a) backed, harbored and conspired with terrorists for more than 20 years (Abu Nidal, one of the world's leading terrorists, recently met his end in Baghdad after living there for many years); (b) made war against two neighbors -- Iran in the 1980s and Kuwait in 1990; and (c) spent billions of dollars trying to acquire weapons of mass murder, succeeding in the case of chemical and biological weapons and coming close in the case of nuclear weapons.

"This pattern of behavior puts Iraq in a class of its own."
-- Marcus Gee

Asahi Shimbun, Japan
"It is increasingly clear that following last year's terrorist attacks in New York and Washington, rogue states, terrorists organizations and others involved in the development of weapons of mass destruction have replaced the socialist nations of the Cold War era as the United States' newly declared enemies.

"This has prompted George W. Bush's administration to state that while the United States will seek allies in the battle against terrorism, it will also not hesitate to act alone, when deemed necessary, to exercise its right to self-defense by acting pre-emptively. With this, Bush has underscored his willingness to resort to unilateral action or first strikes against Iraq or other members of the 'axis of evil.'

"The document also states the intent to maintain military strength capable of dissuading potential enemies with ambitions of building up arms on a par with the United States to abandon such aspirations. This is a signal of the Bush administration's determination for the United States to sustain overwhelmingly superior military might.

"The United States has emerged as the sole military superpower in the post-Cold War age, and there is no doubt the strength of the U.S. armed forces is integrally linked to global security. The sudden recent shift in the Democratic People's Republic of Korea's (North Korea) stance also reflects the impact of U.S. pressure.

"Yet this new strategy also reveals the desire of the Bush administration to make up the rules for what lies ahead. If allowed to develop in this context, this will be an inevitable source of concern and suspicion."
-- unsigned editorial

Die Tageszeitung, Germany
(Translation by Ewald Christians)
"It is becoming more obvious with every statement issued by Bush and Secretary of Defense Donald Rumsfeld: The U.S. administration is determined to go to war with Iraq and there is little chance to change their minds. Approval by Congress -- well before the upcoming November elections -- is assured. Every move that signifies Iraq's increased willingness to cooperate, the U.S. denounces as a mere attempt to conceal Iraq's true motives. Bush will attack, because if he hesitates now, or does not win a war by 2004, he need not bother seeking re-election.

"In November 2001, when the U.S. declared the 'axis of evil' and accused all countries seeking weapons of mass destruction of harboring terrorists, there should have been vocal protests from Europe's leaders. Their failure to protest led Bush to assume his allies were with him all the way. In the spring of 2002 Bush advisors followed up with more wholesale threats, and still there was no response. There could be no better way to make the U.S. feel very comfortable about a joint strike against Iraq.

"It seems too late to counteract now. It would be helpful, however, if Europe took Washington's war cries more seriously and spoke out against them right from the start. It's no guarantee to prevent U.S. war plans, but certainly worth a try."
-- Eric Chauvistre