From strange quark matter to multiple universes, visionaries predict the weird things science has yet to discover. 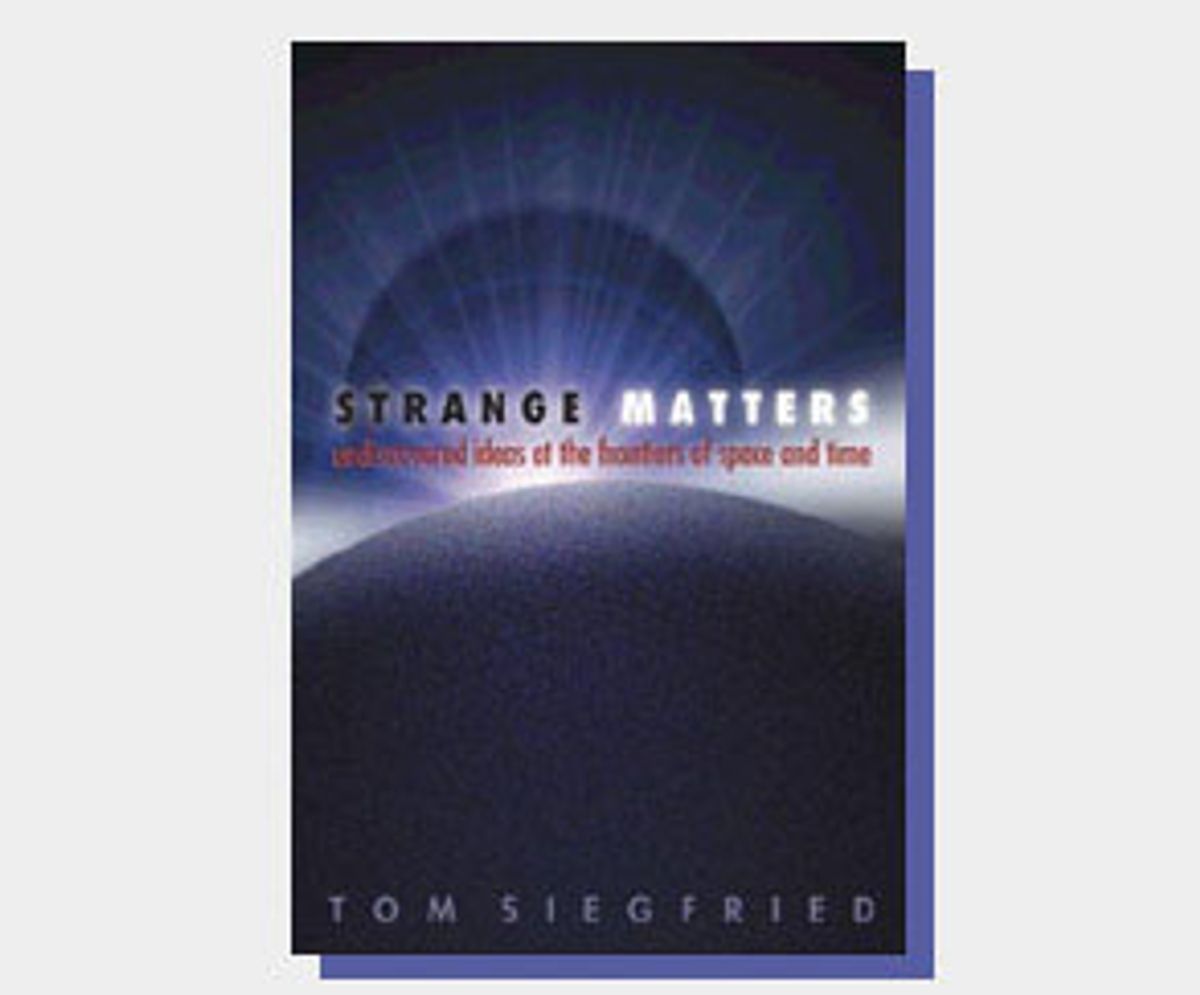 In the fourth century B.C., the Greek philosopher Democritus postulated the existence of atoms, indivisible particles of matter that formed the basis of all reality. Although none of his writings have survived, many of his views were taken up and refined by Epicurus and his followers. Ancient atomic theory reached its zenith in Rome shortly before the birth of Christ, when Lucretius published his magnum opus, "De rerum natura "("On the Nature of Things"), possibly the only epic poem about theoretical physics. Two millennia later, some of the 20th century's greatest scientific minds, including a young Albert Einstein, finally succeeded in conclusively establishing the existence of atoms. Of course, the particles turned out to be rather different from Democritus' conception, but the episode remains one of the most remarkable stories in the history of ideas.

Tom Siegfried would consider Democritus to be only among the first in a long and distinguished lineage: brilliant minds who foresaw discoveries well before they actually happened. These "prediscoveries" form the basis of his new book, "Strange Matters: Undiscovered Ideas at the Frontiers of Space and Time." And although it only alludes briefly to Democritus, this frequently fascinating book is so crammed with information that the omission seems negligible. Why bother with ancient Greeks when there are so many more contemporary instances of prediscovery? Siegfried, a science writer for the Dallas Morning News, weaves historical examples together with a captivating discussion of where science is headed. He wants to show us a snapshot of what is now only fermenting in the minds of physicists but may one day become canonical knowledge.

Theoretical physics, much like the federal tax code and literary theory, has complicated itself so much that it is now incomprehensible to the layman without an adroit guide. Siegfried is an engaging writer and often produces inventive imagery, although he never approaches the level of the great scientists who were also masters of popular science writing, such as Richard Feynman or Stephen Jay Gould. Explaining mathematical concepts non-mathematically requires a particular genius that is somewhat lacking in "Strange Matters." Metaphors are popular science's bread and butter; the best writers consistently come up with analogies that are simple and illuminating. Siegfried's are usually one or the other, only sometimes both and occasionally neither.

This is especially annoying in the historical portions of the book, which deserve far more exposition than they receive. So much is packed into "Strange Matters" that it could never do justice to everything it includes. But rather than neglecting some stories in favor of others, Siegfried maintains fairness by giving them all a cursory treatment. We learn that physicist Murray Gell-Mann predicted the existence of quarks before they were actually discovered, but the precise nature of quarks is only superficially discussed. The same goes for antimatter (prediscovered by Paul Dirac), neutrinos (Wolfgang Pauli) and the expansion of the universe (Alexander Friedmann). Siegfried does toss off some fascinating trivia: Who would have guessed that Edgar Allen Poe had anticipated both the Big Bang theory and black holes? Other than these tidbits, the history has been presented better elsewhere. Siegfried is even kind enough to tell us where, in his well-thought-out "Further Reading" section.

But this lack of deep exploration is much less of a problem when the focus is current science, the area where Siegfried's real passion lies. And since these theories are not understood completely even by the physicists who have fashioned them, you can hardly fault Siegfried for his shallow exposition.

"Strange Matters" launches into the future of science with the relatively unassuming idea that quarks -- the mysterious particles that combine to form protons and neutrons -- might, under certain circumstances, unite in a drastically different way to produce a new substance: "strange quark matter." Although strange quark matter has never been observed (thus making it a potential candidate for prediscovery), physicists such as Edward Witten have proposed that it may be a solution to the mysterious deficiency in the amount of matter currently detectable in the universe.

Witten has since backed away from this theory, citing numerous technical issues, but scientists are still searching for signs of the strange quark matter's existence. In 1999, a few people began to speculate that it might be accidentally created by the Relativistic Heavy Ion Collider (RHIC) at the Brookhaven National Laboratory in New York. The theoretical possibility exists that RISC's atom smashing could create a "strangelet nugget" which might then consume all the matter surrounding it, eventually digesting the entire Earth and transforming us all into one giant lump of quark matter. Although this scenario is rather far-fetched, it was one of the more intriguing pre-millenial apocalyptic theories and no doubt had a few people on the edge of their seats. (Newsweek even carried a story about it.)

But the possibility of destroying the Earth via an as-yet-unseen substance is actually the tamest aspect of Siegfried's bleeding-edge science. Later, from astrophysicist Alan Guth (developer of the inflationary big bang model, now widely accepted), we get the view that there could be numerous parallel universes existing alongside our own, all subsumed by a mysterious metauniverse. This sounds suspiciously like stoned college student talk, a science-fiction novel, or worse, metaphysics -- especially considering that it is in principle impossible to ever investigate any of these putative other universes. But Siegfried makes a strong case against rejecting the idea outright as unscientific. He quotes Martin Rees:

"If a theory including numerous universes explains many hard-to-explain things, then that theory should be taken seriously. If it predicts multiple universes we should take them seriously too, just as we give credence to what our current theories predict about quarks inside atoms, or the regions shrouded inside black holes."

Multiple universes are at least in some sense understandable on an intuitive level. The final third of Siegfried's book deals with much less novice-friendly speculations about the makeup of space and time, such as superstring theory, M-theory, F-theory and all their countless variations. Here we find scientists arguing over how many dimensions make up the fabric of reality; four turns out to be hopelessly passi, the number may go as high as 12. Michael Duff and Cumrun Vafa have proposed that there may be two dimensions of time, an idea so far removed from our understanding of reality that it is incomprehensible except as a mathematical construct.

Despite its limitations, "Strange Matters" is one of the most stimulating popular science works published in the last few years. Not only does Siegfried lead us through the tangled webs of science at the outer limits with an appealingly breezy manner, but the book is worth picking up just to revisit it 20 years from now to see which conjectures have proved to be prediscoveries and which have fizzled out over time. Until then, we can revel in all the exciting, unproven possibilities.