Talking during the movies

Now fan-boys can prattle on about "Spider-Man" and "Mulholland Drive" on their own DVD commentary tracks. Will anybody listen? 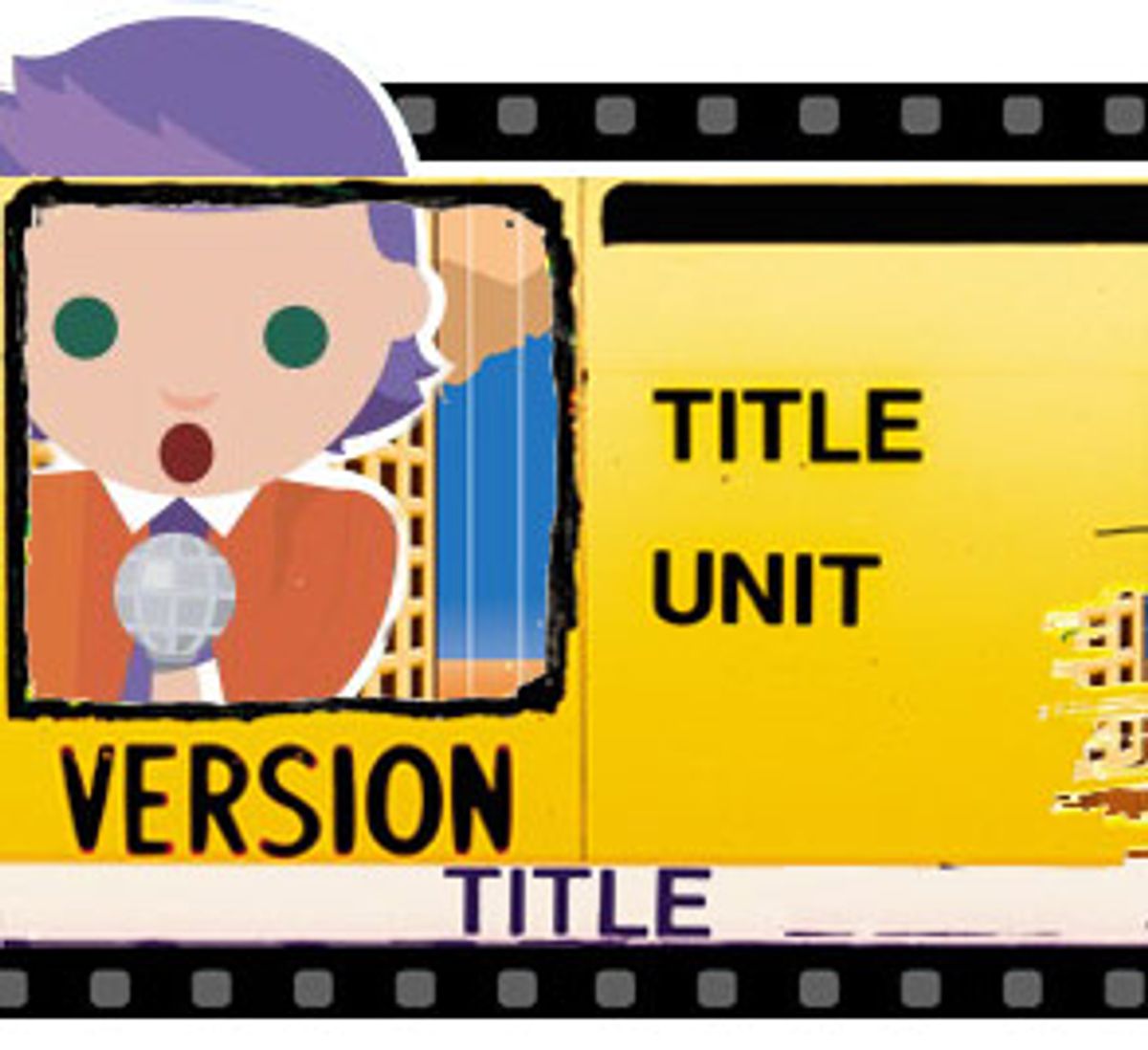 It's early on in a DVD audio commentary track for the low-budget horror classic "The Texas Chainsaw Massacre," and scriptwriter Forrest Gabitsch is riffing on the tools of the splatter-flick trade. "A straight razor, I think, is my favorite slasher-movie weapon," he explains as a really creepy hitchhiker menaces a van full of ill-fated hippies. "Better than butcher knives ... If you're Jamie Lee Curtis, you get a butcher knife because it's something you use in the kitchen. If you're a Dario Argento woman-hating killer you use something that you shave with. There are very gender-specific slasher-movie weapons."

That said, Gabitsch returns to detailing how, using a dull knife, a piece of tubing and a squeeze-bulb full of fake blood, it's really easy to make someone appear as if he's slicing open his own palm on-screen.

Although a listener might get the impression he wishes otherwise, Gabitsch had nothing at all to do with the making of Tobe Hooper's "Texas Chainsaw Massacre." The 25-year-old Southwest Texas State University senior wasn't even born when the movie was released, in the summer of 1974, and the scripts he's penned are of the unsold variety. Gabitsch's "Chainsaw" commentary is a homemade concoction -- recorded in MP3 format and posted on the Web for fellow Fangoria subscribers and their ilk to download and enjoy as they watch Leatherface get his swerve on.

Gabitsch's funny, enthusiastic, well-informed and rambling analysis of "Chainsaw" is one of a small but growing number of amateur audio commentaries listed on DVD Tracks, a Web site for that know-it-all video store clerk who fancies himself the next Quentin Tarantino. The concept is relatively simple, though somewhat clunky in execution: Hook up a microphone to your computer, fire up a DVD, record your insights as you watch, convert your words to either one long, low-bit-rate MP3 or several smaller ones (perhaps divided by chapter), and, finally, post them on the Web. Interested parties can download your file, then play it through their computer speakers in sync with the corresponding disc.

DVD Tracks doesn't host the actual MP3s, but provides links to the commentaries -- there are now around 20 working ones -- and gives users a forum in which to discuss them. Films by David Lynch are among the best represented, perhaps because he doesn't do the commentary thing, with annotations for "Mulholland Drive," "Dune" and "Twin Peaks: Fire Walk With Me." There are a few "Star Wars" commentaries, naturally, plus ones for such cult favorites as "A Clockwork Orange," "Enter the Dragon" and "Jay and Silent Bob Strike Back." For those with less mainstream tastes, there are audio guides to Japanese director Beat Takeshi's "Violent Cop" and "Getting Any?"

Patrick Stein, a 31-year-old computer programmer from Minneapolis, launched DVD Tracks in March; the inaugural track was his commentary on "Groundhog Day." Right now, Stein's Web site appears to be the only one of its kind. DVD Verdict editor Mike Jackson scrapped plans for a similar site, CommentaryArchive.com, but not before the never-realized destination got written up in Wired and mentioned in the New York Times.

Stein cites Roger Ebert's February 2002 Yahoo Internet Life magazine column, entitled "You, Too, Can Be a DVD Movie Critic," as his inspiration. "Many films have admirers who know as much (or more) about them as anyone not directly involved, and I mused that it might be interesting to hear from, say, a 'Mulholland Drive' fanatic -- or someone who had an ideological argument with a film," Ebert says by e-mail. "But the chances of that happening on a commercial DVD were zero." Ebert actually wasn't the first to think up the DIY DVD commentary concept -- it was floated in a June 2001 posting on HalfBakery.com -- but he deserves the credit for popularizing it.

In his column, Ebert writes that he'd even love to hear "a 'Wayne's World'-style track from dudes down in the basement who think 'The Mummy Returns' is way cool." But so far no aspiring Waynes or Garths have weighed in, at least on DVD Tracks.

Some Slashdot users "were convinced that it was going to degenerate into bodily humor," says Stein. "But the tracks that are here completely refute that."

Still, Ebert's vision, which involves "a psychologist analyzing 'Memento' or a Vietnam combat veteran talking about 'Platoon,'" is far from realized. Other twists, such as entirely new movie dialogue tracks (think Woody Allen's "What's Up, Tiger Lily?"), have yet to materialize on DVD Tracks either. Instead you get a bunch of Ain't It Cool News-hounds gabbing about their favorite flicks. Given the time and effort it takes to put together MP3 commentaries, it's no wonder they're recorded by tech-savvy fan-boys -- accent on the second syllable, as the only evidence of a woman's wisdom on any of the tracks comes in a "Mystery Science Theater"-like group take on "Mommie Dearest."

"A lot of the contributors to DVD Tracks are also the people who are commenting on other tracks," notes Sean Weitner, an editor who teamed up with a colleague to do a sharp "Mulholland Drive" commentary for Flak Magazine. "It will always be an underground phenomenon of people talking to themselves. Anyone who calls this the next big thing is really overselling it."

But Ernest Miller, fellow of the Information Society Project at Yale Law School, sees far more potential here. Part of Miller's job is to consider the bigger issues surrounding stuff like DIY DVD commentaries. He says that while MP3 commentary tracks are generally OK legally speaking, going a step further and, say, burning a DVD-ROM of a Hollywood film that features your own armchair criticism, or using software that lets you decrypt a DVD and add audio tracks, is not. Such software could be on your hard drive soon -- Miller points to a forthcoming program called MovieMask Director, which if it lives up to developer Trilogy Studios claims, will let users add their own commentary to a DVD or make even bigger modifications (à la the notorious "Phantom Edit"). The Directors Guild of America recently sued Trilogy over a related piece of software, simply called MovieMask, which excises sex, violence and swear words from select DVDs, so its unlikely the group would take too kindly to MovieMask Director.

But Miller argues that Hollywood should embrace programs like MovieMask Director. He envisions a scenario in which Amazon.com would provide consumers checking out DVDs with a list of free, user-generated commentaries or other modifications available for particular films. "The DVD would be more valuable to me already, and obviously the studio sells more," he asserts. "Gaming companies already realize this. If you buy Quake or Warcraft, the makers provide consumers with the tools to create new levels. So whole communities support these games, and they sell more as a consequence."

There have been a couple of small steps in this direction, one courtesy of the king of (professional) commentary, fan-boy-cum-director Kevin Smith. The enhanced DVD for his movie "Jay and Silent Bob Strike Back" features a link to an "open-mike commentary" Web site that lets you record your own remarks over select scenes and submit your finished work for inclusion in an online video gallery. Submissions, the site makes abundantly clear, become the sole property of Miramax. The forthcoming "Spider-Man" DVD will allow you to add commentary to the entire movie but only play the annotated version on the computer you used to record your words. Judging by both these discs restrictions, it's clear that Hollywood isn't going to loosen up anytime soon.

In the short run, the best the DIY DVD community can hope for is getting more creative contributions from a wider variety of voices. Weitner regrets missing his chance to help advance the cause when he went to see the "E.T." rerelease. "I wish I'd had a microphone with me," he recalls. "There was this boy sitting behind me, he was probably 6, talking to his father through the whole thing: 'Daddy, what's going on?' 'Is that the bad guy?' 'Are the boys OK?' I think that would have been a great audio commentary -- the 6-year-old's experience of 'E.T.'"

Mark Yarm is a freelance writer living in Brooklyn.