Investors of the world, unite!

Former chairman of the SEC Arthur Levitt declares the time is ripe for fighting back against Wall Street. 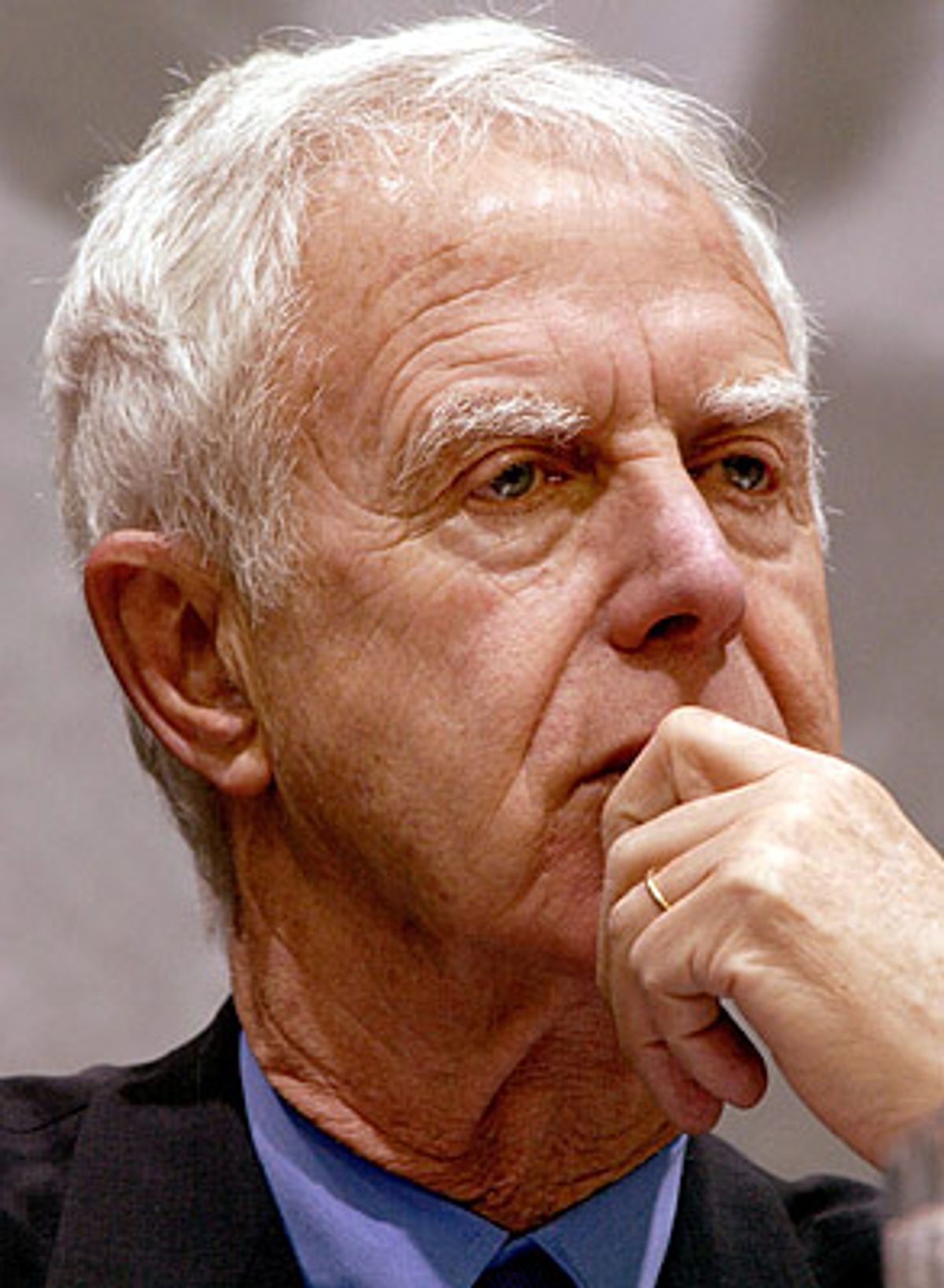 As chairman of the Securities and Exchange Commission from 1993 to 2000, Arthur Levitt knows better than most people just how hard lobbyists for big business fight to evade government scrutiny and regulation. The battles during his tenure were furious, and more often than not, Levitt, who believed strongly in more oversight and accountability, was the loser.

His new book, "Take on the Street: What Wall Street and Corporate America Don't Want You to Know," is intended mainly as a guide for investors who worry about putting their money in a market fraught with scandal. But the book could also make a handy voting guide this November, as it gives a good sense of where various politicians stood on regulatory issues before recent scandals came to light.

Want to know what Billy Tauzin -- the Louisiana Republican who, as head of the House Energy and Commerce Committee, has been a recent, relentlessly fierce critic of Enron -- was doing for investors in flusher times?

Levitt provides a damning account. "When the cameras aren't on, Tauzin doesn't always carry the investor torch," he writes. "In the spring and summer of 2000, when our auditor independence rules were being debated, Tauzin was relentless. He sent three separate letters warning the SEC to back down ... While I can't prove that [one of Tauzin's letters] was written by lobbyists from the Big Five accounting firms, it strains credulity that Tauzin or his staff could have written such a detailed letter on their own ... Tauzin's strategy was obvious: any delay would push the process past the November election, and a George W. Bush win would likely mean the demise of our rule."

Levitt did ultimately manage to push through some new accounting rules before Bush came into office. He prohibited accounting firms from providing many "non-audit services" -- such as serving as human resource manager or stockbroker -- to companies they audit. But Levitt concedes that the pressure from lobbyists prevented him from going "far enough," especially from enacting rules to prevent accounting firms from providing consulting services to their clients.

"Take on the Street," co-written with BusinessWeek editor Paula Dwyer, is a history of such tough fights, of battles with moneyed lobbyists and compromised lawmakers decrying his every move. In response to almost everything he proposed at the SEC, business interests mobilized: "With laser-like precision, groups representing Wall Street firms, mutual fund companies, accounting firms, or corporate managers would quickly set about to defeat even minor threats," he writes.

Prominent politicians in both parties often joined in -- and sometimes, as in his 1993 effort to force companies to account for stock options as an expense, he had no choice but to back down. "I regard this as the single biggest mistake during my years of service," he writes of his failure to get strong stock-option rules enacted. (Helpfully, Levitt reprints many of the critical letters he received from CEOs and congressional representatives. One from former Enron CEO Kenneth Lay "respectfully urges" Levitt to re-think his pro-regulation designs, saying that current rules have been beneficial to his company.)

In a telephone interview with Salon from his office in New York, Levitt said that he's pleased that corporate scandals seem to have changed the mood in Washington. But the only way the changes will last, he says, is if investors form their own powerful political bloc to oppose the moves of corporations.

Did you start writing this book before or after the latest corporate scandals?

Oh, I started it long before. Most of it's in reaction to what I saw happening in America, which was a deterioration of ethical values that generally follows a runaway bull market.

You believe that's inevitable in a bull market?

So since the scandals broke, has enough been done to fix that?

I believe that humiliation and embarrassment has already begun the process of changing societal behavior. I think that regulation and legislation may prolong the impact of that societal change. But in and of itself regulation doesn't usually change behavior.

Does that mean that the exuberance we once saw over the market -- the feeling that it would lead to instant wealth -- is that gone forever?

I think that traditional [methods for valuing stocks] -- those verities have shown their true place, and the talk about a new paradigm that calls for different standards to apply to technology-oriented companies is being exposed for its innate weaknesses.

In the book, I was struck by all of the lobbying efforts that went on to prevent you at the SEC from enacting regulations. And it seemed to come to a head with the efforts to regulate stock options --

You know, that's not quite right. There was huge lobbying about the options issues when I got there. But there was even greater lobbying -- much better financed, much more comprehensive and much more destructive -- towards the latter part of my term on issues such as auditor independence and Regulation Fair Disclosure. [Regulation Fair Disclosure, or Reg FD, was enacted by the SEC in 2000 to ensure that every investor in a firm received information at the same time, outlawing "selective disclosure" to analysts and brokers. The rule was criticized by many Wall Street firms.]

And auditor independence was introduced in the "corporate responsibility bill" [the Sarbanes-Oxley Act of 2002] which passed this year -- but expensing stock options was not?

So does that show that the lobbying efforts are still intense?

Yes -- oh, my goodness yes. The only answer to all of this is a public investor universe that's prepared to organize to protect their interests. Because at any point in time, as we talk now, the lawyers of America, the stockbrokers of America, the stock exchanges of America and the accountants of America have their lobbyists on Capitol Hill lobbying for issues that may very well be against investor interests. What I'm suggesting is that potentially the most powerful lobbying force in the country is probably the weakest.

So what should investors do?

I think they should get organizations such as the AFL-CIO, the Motley Fool, the Consumer Federation of America, the AARP engaged on securities issues. Everybody that has any access to a portfolio of securities [should be engaged on the issue.]

Also, I noticed in the book that although Republicans were often more on the side of the corporations, there were many Democrats pushing you to slow your regulations.

I think that's true. I think that in general the Republicans tended to be more deregulatory but on critical issues they crossed party lines and there were people whose support was gained by contributions on both sides of the aisle.

Well -- when I really needed them however, Larry Summers [Bill Clinton's last treasury secretary] and Tom Daschle were there for me when they tried to cut my budget. So I think when they saw it as a political issue they rose to the occasion.

Would you say that the Democrats have responded better, recently?

Yes, I would say that.

What do you think of the regulations that were passed?

I think the Sarbanes-Oxley bill was one I could support and did support. It raised the budget of the SEC and it also provided oversight for the accounting profession. And maybe most importantly it gave independent funding to [the Financial Accounting Standards Board, which sets accounting standards].

Do you think the current SEC has been forceful enough in its efforts?

I think that by and large it's the same commission I headed and I think they're doing a competent job.

There were calls earlier for Harvey Pitt's resignation --

Not recently, though. That's kind of died down.

One of the things you outline in the book is that the incentive structure on Wall Street is all wrong -- brokers aren't paid to look out for investors, and analysts aren't either. Do you think that many people are wondering why they should invest -- whether the whole thing's stacked against them?

Well, I don't think you have any alternatives. You're investing when you put your money in the bank, and I think it's a quality of where you invest and what the quality of your investments should be. Should you invest in an index fund, which spreads your risk, which is what I urge small investors to do. Should you hire an investment advisor, which I think is preferable to hiring a stockbroker.

But it seems much harder to be an investor these days than it was made out to be in the '90s -- it's a lot more work.

What's your take on the latest CEO compensation scandals -- the lavish pay packages?

I think compensation has become outrageous and the recommendations of the Conference Board, I think, are an appropriate road to go down. [The Conference Board, a nonprofit business research firm, recommended, among other rules, that stock options given to executives be accounted as an expense on a company's balance sheet.]

Do you think that the extravagant compensation led to some of what we're seeing?

Yes, absolutely. I think it led to the blind support for the granting of stock options that were not performance-based. And the competitive juices that fuel American business to begin with led them in a direction of ever-increasing pay packages as a sign of leadership skills. I think the leaders of the future will be somewhat more thoughtful and less muscular.

How will such leaders come into power?

I think societal change, the media, will cause that.

Yes, I do, and I certainly hope so.

What do you think, then, of the Bush administration's explanation for all this -- there are a few bad apples, and everyone else is OK?

No, no, I think this is much broader than that. I think that a lot of people, investors, business, have been caught up in the hype of a 20-year bull market.

Is that 20-year rise now finally over?

Do you think we're due for a long bear market?

Don't know. I think that some of the [changes in corporate governance] will help reassure investors, will reassure public confidence in the system.

Are people on Wall Street going to get anything out of your book -- parts of it are written like an exposé, and I wonder whether that will get some people to see these things as a real problem.

I don't know. It's hard to tell; they'll be angry at me. I'm not sure it will go beyond that.