My hormones and my husband

When I am in the throes of PMS everything I have never quite liked about him gathers an inch south of my belly button. 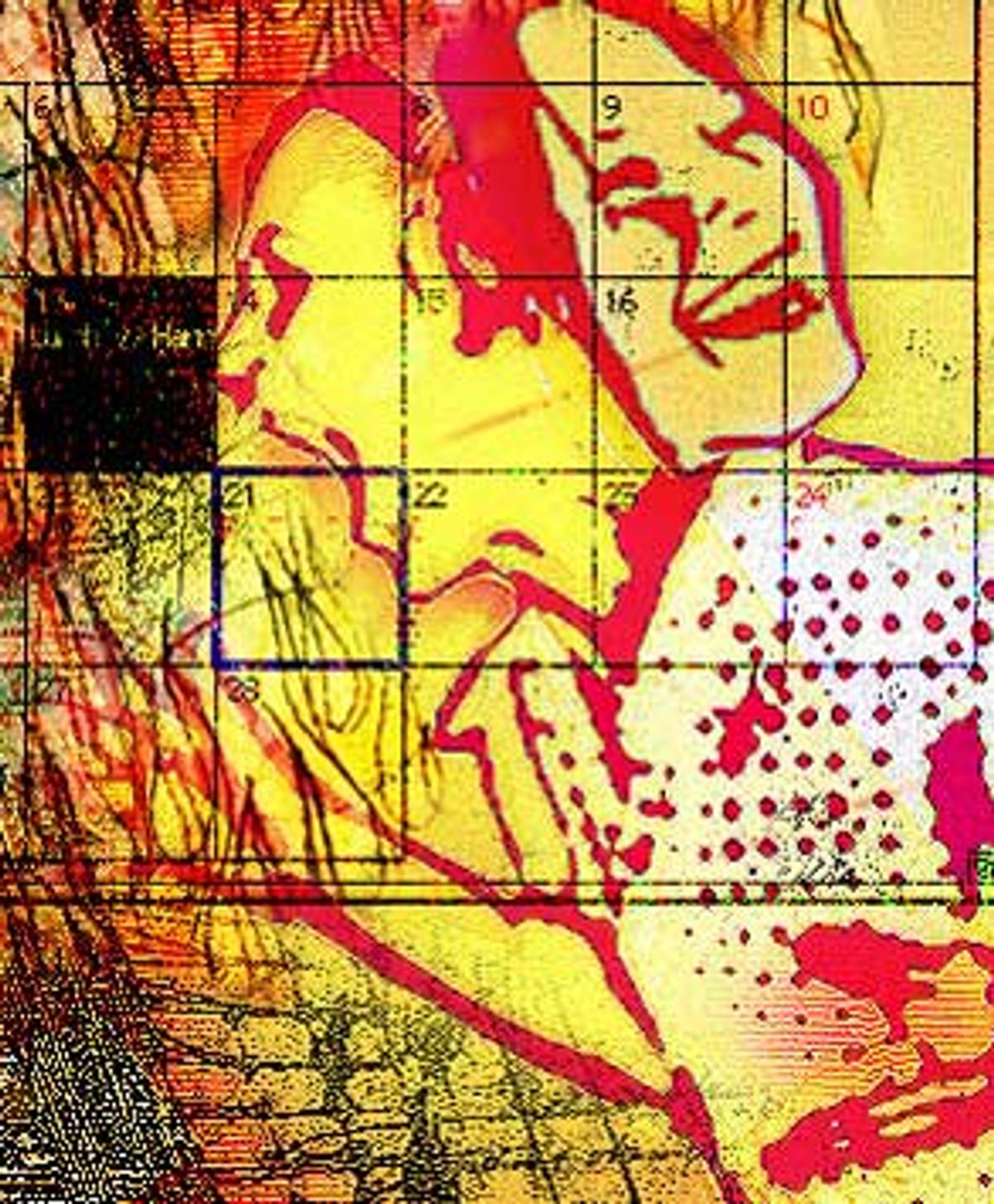 Every month we have the same fight. He says it's because of my period. Says it in a timid sort of way: "You are PMS, aren't you?" It's as if he's a bullfighter inserting a barbed wooden stick into the side of my neck.

I never can get myself to agree, but then I'm probably in a thicket of the PMS forest so what do I know? The fight usually does coincide with the 10 days before my period, which I will not admit to until the 11th day. And every month it comes as a miserable surprise to me that I feel this way. I think whatever is bothering me is real as rain and he insists it's a hormonal mirage and he just needs to "lie low."

Whatever the case, there I am with these thoughts. I look at him, the man I married and love very much, and I'm looking at his profile in the front seat across from me in the car. (I'm letting him drive because I am trying to prove to myself that even though it is right before my period I can allow him control of the wheel) I notice something about his temple area that I do not like; a certain weakness, an old-manness that might be creeping up. He has an oddly shaped small double freckle there and a strand of gray hair and his skin looks a bit thinner there.

We're in the car on the way to see the movie "Unfaithful." I'm looking at him and he turns his eyes from the road and says, "What? Are you looking at my hair? I'm really bald, aren't I?"

I turn facing front again, clutching the straps of my black Coach backpack purse, the same way old ladies like my grandmother held the double-handled purses that made snap sounds when shut. I have lied and I feel no conscience about it whatever. Him and his vanity about his hair.

"I have finally figured out that middle section," he says, looking over at me while he's supposed to have his eyes on the road, which makes me nervous as hell.

"That song called, 'I Don't Want To Hear It,'" he says and I bite my tongue to keep from laughing.

"Oh, the jazz one ... Hmmm ... Yeah, you've been fretting over that one," I say, looking straight out the front window at the road, hoping he'll take a clue from it and start watching where he's going.

"So I like it." He hums it for me, but I can never tell melodies of songs by humming. I need some other reference point.

"Oh, that's nice," I say. I know I'm sounding like a bitch who does not care, but everything I have ever not quite liked about him, small annoyances in the 12 years we've been married, are heaped together and thrown into a white clapboard junk drawer located about an inch south of my belly button.

It is the day my period is due, and I am using what I have learned to avoid a fight with him. If I am not careful I will say something that I will regret for the other three weeks of the month -- something mean, something that cuts and leaves a scar. Just the thought of one of those remarks and I see a picture in my mind of him biting the inside of his mouth and going still and quiet as a bird in a war zone. Best not to hip-hop or even fluff wings. Just sit still until it's over.

One of my acquired bits of wisdom is to pretend like I'm listening so he won't accuse me of not listening and so that when I am telling him something he'll really listen and I won't feel guilty taking up his time boring him with chick data, like how I'm seeing those first yellow zucchini flowers, and how fast that happens.

That he might just be doing the same thing to me, pretending to listen, while actually writing the B section of a song in his head never really occurs to me. We both know he's a better listener. It's one of the reasons I married him. He's slow and quiet and when you tell him something he takes every word in, weighs it and considers it, a quality you don't see much. You sure don't see it in men in the business world. They are like zap zap zap rat-a-tat tat pow in their conversations. They spit out whole sentences like Uzi spatter, don't stop till they run out of ammo and reload as you form a sentence.

Since I work in that world I have to be fast too, faster than they are, since I have to think two sentences ahead so I can steer the conversation to where I want it. He is a carpenter, used to measuring and looking. He looks at a wall a long time before even thinking about cutting into it; measure nine times, cut once. He thinks a long time before answering.

It makes me think about saying anything mean as it would be like a slow-motion killing, put a knife in and he'd feel it go past his liver, nick an intestine, hit a bone. Besides, at couples counseling we were taught active listening skills.

"Repeat back what you heard the other person say," a thing that made us both roll our eyes it seemed so pretentious.

We even do that sometimes to crack each other up: "What I heard you say was, Fuck you. What you really said was fuck you and you are such an incredible jerk."

We almost slipped and said that in one of our sessions in front of our therapist who would not have had a sense of humor about The Process.

I always won at therapy anyway, because I could talk a hundred times faster than him. She sided with me most of the time since I could present my whole case, his case, and the kids' case and have it neatly wrapped up, fair and everything in about four and a half minutes. She was just nice (and getting paid to sit on her behind in that Eames therapy chair with the feet up) and probably pretending to listen.

She shared with us one day how she finally told her husband, after 35 years of being married, that he did not ever shove the dining room chairs back flush under the table, how she was the one that had to do it every time, how it had bothered her through their entire marriage. This was to demonstrate the healing release of honest communications.

So we never went back, but we did laugh about it in the car on the way home, so I suppose it was worth the money.

He looks over at me again, slowing way down before he gets to the intersection, ensuring he will not make it through the light.

That's another thing I hate about him. He always knows how I'm feeling. He knows when I'm mad, and he always knows when I want sex. I can't hide anything. I can only lie about really small things, and then I feel guilty so I don't.

Unless it's this time of the month.

If he were a stranger it would be different, I think. I could think I hated him for his hair or his eyebrows and it would not matter. The thing is, I wouldn't bother to hate a stranger's eyebrow hairs. It wouldn't matter to me.

So we see the movie "Unfaithful" and afterward I can't bear to look at him. I'm thinking, Has he ever grabbed me up like Olivier Martinez grabs up Diane Lane? Has he ever said sappy things like "your eyes are so beautiful you should never be able to close them even at night"? All he ever says to me is, "Oh, you are so cute. You look cute today." I hate that word more than I hate the word "gal," which he actually said to me once and I was ashamed and embarrassed, thinking it was the squarest, most Lawrence Welk white pants white shoes constipated word I'd ever heard.

And in "Unfaithful" they do it from behind and he rips her underwear off. I guess I won't blame him for not doing that, I'm ashamed of my flat behind and prefer to lie on my back allowing that he might imagine a rounded derriere in black undies, and not my mushy behind in 100 percent cotton. White.

He, my husband, does however look quite good quite suddenly in his leather car coat. His stubble is coming in and making him look scruffy and maybe a bit French. His hands that I've always loved tap the steering wheel like a drum, like his favorite guitar. I imagine his index finger thrumming one of the small hairs at the back of my neck.

Maybe I got my period.

Sheri Cooper is a writer in Northern California.