Concerned that the White House's proposal is too open-ended, senators debate how to craft a response. 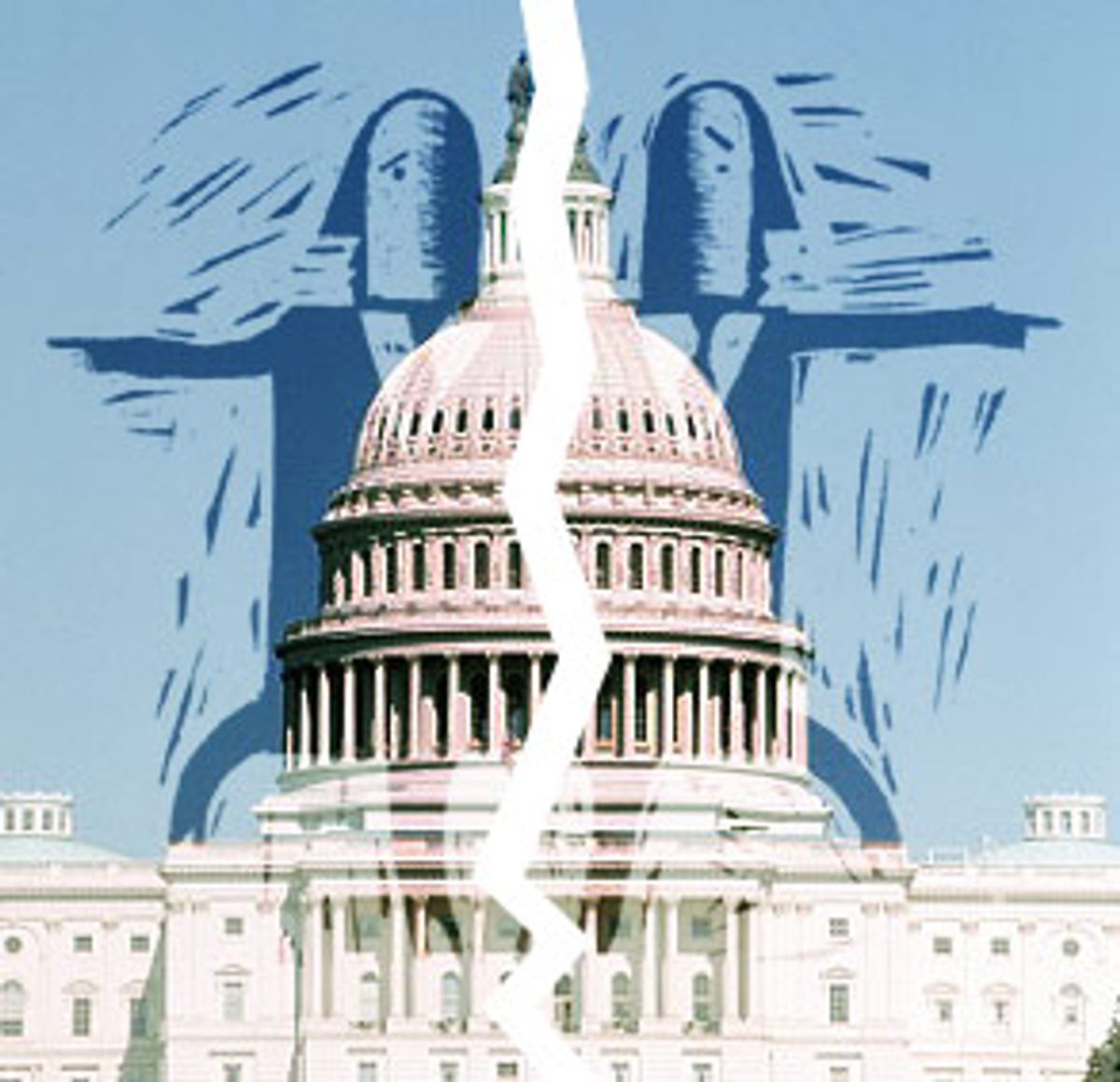 With Republicans pushing to begin debate on a White House proposal authorizing the use of force in Iraq as early as next week, some Senate Democrats said Tuesday they have serious concerns about the resolution President Bush sent to Congress and are working on an alternative, less open-ended resolution.

While Senate Majority Leader Tom Daschle said it was "too soon to know" whether there would actually be an alternative to the Bush resolution before Congress, other Democrats said such a counter-proposal is all but certain if the White House refuses to modify the language of its proposal.

Sen. Russ Feingold, D-Wis., said the resolution sent by the White House "insulted the Constitution" and should be junked. Barring that, Feingold said, many of his Democratic colleagues are prepared to go ahead with an alternative proposal. It remains unclear what that proposal would entail -- or even whether it would actually authorize the use of force in Iraq.

Feingold said the White House proposal was, in his view, "a non-starter." "The language is so broad considering use of unlimited force any time anywhere in the region. That language needs to be completely scrapped," he said. "I'm not ready to vote for a resolution that is completely open-ended."

Feingold said he has had discussions with colleagues about how to proceed on the Iraq issue -- whether to engage with the White House to get the language of its resolution modified, or to propose an entirely new bill.

"There has been some kind of theoretical discussion about some kind of alternative, but it wasn't presented as the approach we're going to take," he said. "I've heard three or four ideas about what we should do."

One of those ideas would be to introduce amendments to the White House's proposal either during the committee debates or on the Senate floor. Senate Armed Services Committee Chairman Carl Levin, D-Mich. and Sens. Dianne Feinstein, D-Calif., and Paul Wellstone, D-Minn., are said to be drafting language that may be introduced as an amendment to the White House's resolution, but Wellstone said Tuesday the Democrats had not yet decided whether it was tactically wiser to try to amend the resolution or present an alternative one.

But many Democrats are now beginning to talk openly about challenging the White House with a counteroffer. "I'd be surprised if there is not a parallel resolution," said Sen. Ben Nelson, D-Neb. "Just as a general matter, I would imagine there would be more than one proposal."

Among the ideas for alternative proposals, according to Nelson, would be to include language in which the United States would pledge to assist in the rebuilding of post-Saddam Iraq.

Nelson said that senators including Levin and Foreign Relations Chairman Joe Biden, D-Del., are among those considering the idea of a resolution to compete with the White House proposal. Last week, Sen. John Kerry, D-Mass., also hinted he might endorse something other than what the White House has sent to Capitol Hill.

There also seem to be some Republicans who want to hear more before they endorse the use of American troops to oust Saddam. Among them is Sen. Richard Lugar, R-Ind., the ranking Republican member of the Senate Foreign Relations Committee.

Lugar pointed to the rebuilding efforts in Afghanistan, which he called "inadequate," saying "it leads many to wonder, 'How prepared are we for Iraq?'"

"It seems to me that the credibility of our efforts would be enhanced if the president is able to speak comprehensively about the future and sketch in the kind of commitment so the American people understand this is not going to be a quick war," Lugar said. "If we're going to change regimes, in that case you have changed a nation very significantly. You have eliminated its government. So nation building has to be part of the thinking in any such effort."

The discussion over possible military action in Iraq continued today behind closed doors, when CIA Director George Tenet met in closed session with the Senate Foreign Services Committee. This week, the committee will hear testimony from Secretary of State Colin Powell, and two of his predecessors -- Henry Kissinger and Madeleine Albright. Unlike today, those meetings will be open to the public and the press.

The comments also come just one day after former Vice President Al Gore issued a blistering attack on the White House's Iraq strategy. Reaction to that speech was mixed among Democrats on Wednesday. Several Democratic senators, clearly uncomfortable at having to take on Bush's war-on-Iraq policy directly, offered only vague platitudes in response. However, Feingold embraced it as "an excellent speech. It showed real leadership. I hope it causes more members of the Senate and House to say what he said, which is, what is our priority here? We thought our priority was fighting terrorism. He asked hard questions about what this has to do with fighting terrorism."

But Sen. Robert Torricelli, D-N.J., blasted Gore's speech. "Completely not relevant," said Torricelli. "That may be his judgment, but it doesn't represent the views of any of us in the Democratic Party. There's a legitimate criticism of the Bush administration over the last several months. They have not implemented the strategy well, it's caused some problems with our allies, unnecessary division within the administration. But the policy of preemptive action to deny rogue regimes weapons of mass destruction should be a bipartisan issue."

And while the White House has been claiming it hopes to "depoliticize" the Iraq debate, no one there seems to be shedding any tears while watching a split Democratic caucus arm-wrestle over Iraq, instead of beating up on the White House's economic record with a unified voice.

Sen. Richard Durbin, D-Ill., questioned whether the ongoing Iraq discussion was part of a "White House strategy to drag this debate out indefinitely to get this as close to the election as possible so the White House ... does not have to face the reality of an economy that is flat on its back."