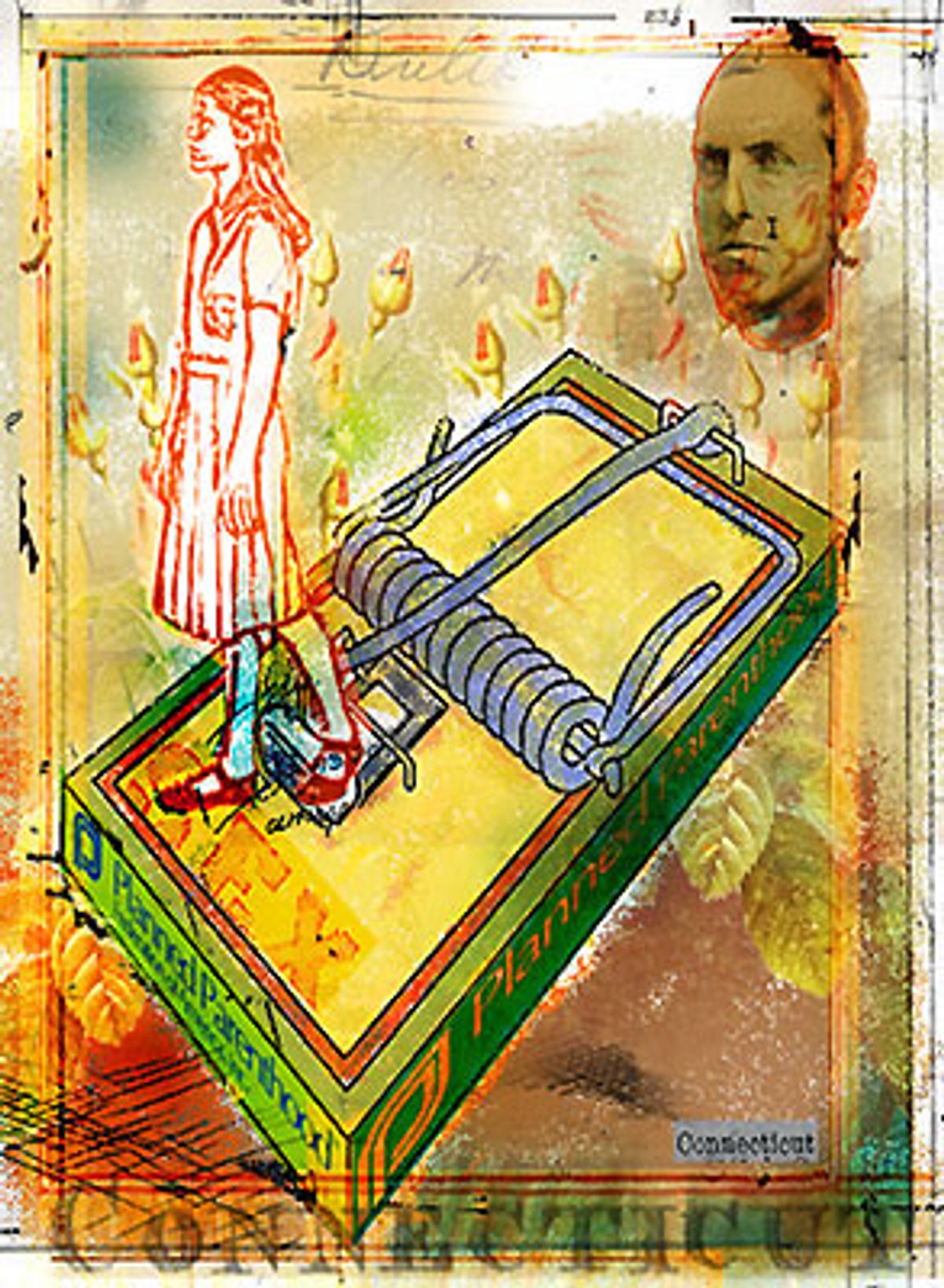 The girl on the phone says she's 13 and pregnant by her 22-year-old boyfriend. She needs an abortion, but doesn't want her parents to find out. Can Planned Parenthood help?

Sure, just as long as she doesn't reveal her boyfriend's age when she comes in for the procedure. She wouldn't want him to get into trouble, now would she?

Girl: "Then it will be OK?"
Planned Parenthood receptionist: "If you do not say the age of your partner."
Girl: "OK."
Receptionist: "OK, otherwise, there's going to be a lot of stuff going on that you're probably not going to want to have happen."

This taped exchange, which ostensibly took place in a phone call to a Planned Parenthood office in New London, Conn., earlier this year, is enough to make even the staunchest pro-choice advocate wince. Is the receptionist just saying whatever it takes to get a desperate kid into the clinic so she can get help? Or is she coaxing a child to lie to get an abortion, possibly protecting a child-molesting "boyfriend" in the process?

There's just one catch: There is no distraught 13-year-old girl, no unwanted pregnancy and no cradle-robbing, 22-year-old boyfriend.

The caller isn't a 13-year-old, she's an operative in an elaborate sting conducted by the antiabortion group Life Dynamics of Denton, Texas. The group's campaign seeks to paint Planned Parenthood and other abortion providers as silent accomplices in thousands of unreported pedophilia and statutory rape cases.

On ChildPredators.com, the group posted a report detailing the alleged results of some 800 phone calls, like the one above, to clinics across the country. The antiabortion group claims that Planned Parenthood and the National Abortion Federation failed in 90 percent of the calls to comply with laws requiring that underage sex be reported. The accusation: These organizations are not just providing abortions, they're covering up child abuse. (Representatives from Life Dynamics refused to comment for this story, charging that this publication is a "pro-abort" Web site.)

In Connecticut, the antiabortion smear campaign worked. Excerpts from tapes of phone calls between a phony 13-year-old and a Planned Parenthood receptionist, aired on the Connecticut Fox News affiliate, prompted the state attorney general to launch an official investigation. A Nebraska antiabortion group also made news by asking its state attorney general to launch a similar investigation.

It was a deft guerrilla maneuver by the antiabortion camp. Life Dynamics succeeded in goading officials into action by exploiting both a heightened public concern about child abuse and confusion in state laws about what constitutes abuse. The group is wielding laws relating to child abuse in an entirely different arena -- to threaten underage girls' rights to an abortion.

And the antiabortion group is doing so, despite the fact that the way it obtained the "evidence" -- clandestine recording of phone conversations -- is against the law in Connecticut.

Regardless of the tactics, Life Dynamics got what it wanted. A fringe antiabortion group in Texas managed to inject a wild accusation -- Planned Parenthood protects child predators! -- into the center of mainstream public debate in Connecticut.

Whatever Life Dynamics' motivation, clinic receptionists aren't supposed to coach teens to conceal the age of their partners. Planned Parenthood says it's responding to the legitimate concerns raised by the campaign.

"We are using these calls as object lessons in how to deal with that situation," said Roger Evans, senior director of public policy, litigation and law for Planned Parenthood.

But Evans cautioned that the group is suspect because of its political agenda and problematic past.

"Life Dynamics is not some social science academic institute," said Evans. "They are zealots with a mission and a history of dishonesty."

The last investigation triggered by a Life Dynamics campaign died an ignominious death when a key witness admitted he had lied.

Life Dynamics is the same organization that in the late 1990s perpetuated the myth that abortion providers were illicitly trafficking in fetal tissue sales. A March 2000 congressional investigation, sparked in response to a report on ABC's "20/20," examined the issue. But the inquiry went nowhere when one star witness failed to appear to testify and another, a medical technician named Lawrence Dean Alberty Jr., who had been featured on the "20/20" segment, admitted under oath that he'd lied on camera about witnessing tissue smuggling, and had been paid more than $20,000 by Life Dynamics. "They basically perpetuated a fraud on Congress with misinformation," said Vicki Saporta, president of the National Abortion Federation.

At issue in Life Dynamics' current campaign are "mandated reporting" laws requiring certain professionals, such as teachers and doctors, to report suspected child abuse to authorities. Several states are in the process of expanding the list of people considered mandated reporters, which now includes anyone from dental hygienists to podiatrists.

Given the confusion in various states about what constitutes abuse, the abortion provider who wants to avoid a legal quagmire would be wise not to determine the age of a client's partner, unless molestation is clearly suspected. Some states clearly define abuse as sex with a minor by a guardian. Some laws are so ambiguous that even sex between minors can be considered abuse that must be reported.

In essence, Life Dynamics is attempting to define any underage girl's pregnancy as a sign of child abuse. Therefore, the girl's identity as well as her boyfriend's must be revealed to officials. If Planned Parenthood fails to do so, the organization contends, authorities should shut it down.

To put its own extreme spin on it, Life Dynamics portrays Planned Parenthood as covering up for child predators. In a canny move particularly effective now, the organization compares Planned Parenthood's protection of client identities to the Catholic Church's coverup of clerics' pedophilia sex scandals.

"For the pro-life movement, our duty is to go into the civil court system and see that the legal standard currently being rigorously and justifiably enforced against the Catholic Church is also enforced against Planned Parenthood and the National Abortion Federation," writes Life Dynamics founder Mark Crutcher.

To this end, the organization urges underage girls who have had abortions, and their parents, to become plaintiffs in a massive class action lawsuit to take down "the abortion industry."

In Connecticut early this year, while the priest sex scandals were breaking in the press, another underage sex scandal made headlines. In Bridgeport, a 75-year-old man was charged with sexual assault after he allegedly impregnated a 10-year-old girl. It turned out two doctors who had examined the girl did not report her condition, which eventually led to the arrest of both physicians.

It was against this explosive backdrop that Life Dynamics sent 19 tapes of phone calls to the local Fox News affiliate in Hartford, WTIC-TV, Channel 61. Life Dynamics refused to release the tapes to Salon. Fox provided transcripts of its newscast quoting the tapes.

Although news director Paul Lewis said he was initially dubious about the source of the story, he ultimately ended up running a piece based on the tapes. "This is not a story about abortion. This is a story about mandatory reporters, and regardless of anyone's feelings about abortion rights, the tests done by Life Dynamics reveal some troubling holes in the mandatory reporting system," said Lewis.

The controversy caused by the May 22 Fox story prompted the Connecticut Office of the Chief State's Attorney to launch a criminal investigation. Under Connecticut's mandatory reporting law, doctors, nurses, police officers, clergymen, teachers and many other caregivers are required to file a report when they suspect child abuse or neglect, which includes sexual "molestation or exploitation."

But the investigation based on the Life Dynamics tapes resulted in no charges or arrests. According Judith Rossi, executive assistant state's attorney in Connecticut, the investigation ended when "we determined that we could not ascertain the identification of people on the tapes. We concluded that we would not be bringing any charges."

There were a couple of other sticky problems with bringing a case: Receptionists are not mandated reporters in Connecticut. There was no pregnant 13-year-old.

Under Connecticut law, "intercourse" is on a list of eight possible signs of sex abuse. Does that mean authorities should be notified if an underage girl has had sex? State officials concede that the law is vague and it's up to legislators to clear up confusion.

In the meantime, Bailey said Planned Parenthood staffers are required to inform authorities if a child impregnated by an adult comes to a clinic for treatment. Under Connecticut statutory rape laws, an adult in such a case can be charged with second-degree sexual assault, a class C felony.

"Here in Connecticut our statutory rape law is somewhat out of sync with the rest of the country," said Susan Yolen, vice president of public affairs and communications for Planned Parenthood of Connecticut. "In most states, there has to be between a four- and five-year age difference to assume that the young person is being preyed on. In Connecticut, the statute is two years."

So, are clinicians required to ask underage girls the age of their sexual partners to enforce statutory rape laws?

"That is definitely not stated in our statutes," said Yolen. "We are healthcare professionals, not investigators. We need to make sure that kids aren't afraid to go get the services they need, balancing that with our concern about kids who might be at risk."

The irony is that it's Life Dynamics, not Planned Parenthood, that may have broken Connecticut law. While in Texas it's legal to tape record a phone conversation without informing the other party, Connecticut requires full disclosure before recording. Does Life Dynamics have a Linda Tripp problem in the way it conducted its sting?

A Connecticut state's attorney says it would be up to a court to determine which law would apply in this case -- Connecticut or Texas -- but it's not the criminal justice system's problem, since any litigation related to such a call would be a civil, not a criminal, matter.

While no suits have been filed, Saporta, the NAF president, says she's considering taking legal action against Life Dynamics: "It may make sense to see if there's any appropriate litigation that could be brought for the way that Life Dynamics conducted the survey, and the laws it broke in the process."

Ultimately, Life Dynamics' "sting" proved little or nothing about how abortion providers deal with young clients.

Thirteen-year-olds do not call up abortion clinics to request services, much less ask questions about what will happen to their sexual partner if they come in, according to Evans. When girls this age seek abortions, in virtually every case, they approach the clinic through a parent, aunt, grandmother or foster parent, he says.

So, "What will happen to my 22-year-old boyfriend?" isn't in the receptionist's training manual. "The job of a receptionist is not to be an inquisitor for the purpose of making reports," says Evans. "The job of the receptionist is to be inviting. 'Come see somebody. We'll try to help you.'" Clinicians only start asking probing questions about a sexual partner's age when they have reason to suspect abuse -- if a pregnant patient is particularly young, for example, said Yolen.

The damaging sting likely won't be the last time abortion providers will be shaken by Life Dynamics' tactics. The organization has proven to be a shrewd manipulator of law and public perception and government officials' sensitivity to the media.

Frederick Clarkson, author of "Eternal Hostility: The Struggle Between Theocracy and Democracy," says groups like Life Dynamics shrewdly use the media to incite public outrage to get the government working for their cause. An investigation launched by an attorney general's office "plays right into their hands," says Clarkson.

"The purpose of Life Dynamics' campaign was to cast suspicion on Planned Parenthood, and it succeeded, and it may well have violated state and federal laws to do it," he said. "The state attorney general investigated the victim -- just like Life Dynamics hoped they would."