Goldie Hawn is a hot woman of a certain age who dares to possess a sex life, romantic feelings and an awareness of power and money. 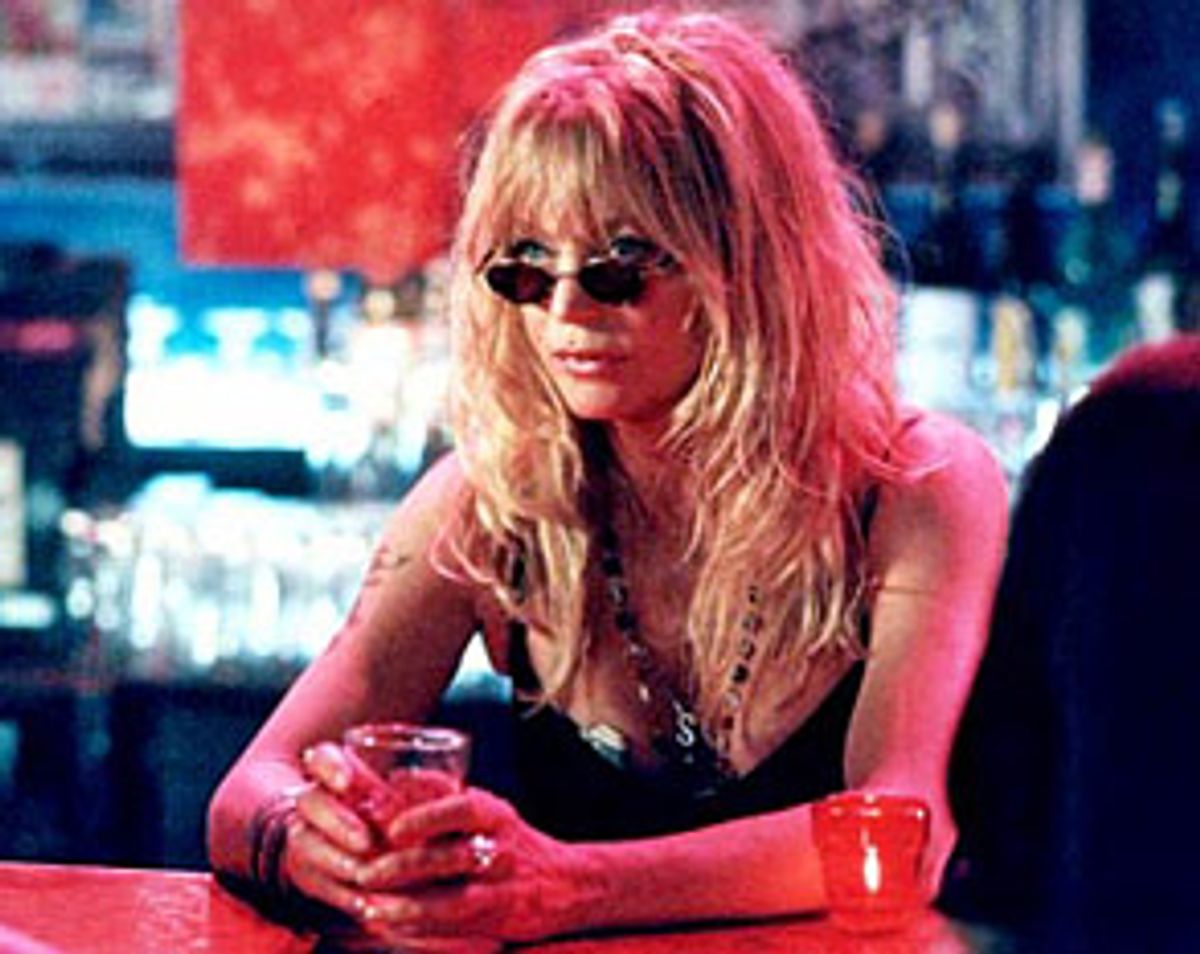 Did you notice how, last weekend, "The Banger Sisters" creamed "The Four Feathers"? Well, "creamed" is hardly the word, because neither film really did very well -- not compared to the way the restaurant I was in emptied out at 8:50 p.m. on Sunday as people hurried home to see "The Sopranos." Still, I'll bet Goldie Hawn let Kate Hudson know which film had done better -- albeit, in the nicest, girly, giggling way. Which leads me to the stunned reflection that, honestly, doesn't Goldie have more of a future than her daughter? I mean, so long as Goldie has such a lock on not growing up, what space is left for Kate? Except to play fatuous English girls with names like "Ethne."

Don't misunderstand me. I see Kate Hudson as a lovely, decent, wholesome young thing, a credit to her upbringing and all the solid sense talked at the Goldie-Kurt Russell dinner table. But just think of those feathers! While Kate Hudson is handing out a white feather with all the demure, depressed, constipated disapproval of a Victorian miss who wants her idiot officer husband honorable, if anyone had ever offered the young Goldie a feather she'd have used it to tickle Dick Martin to the point of delirious orgasm. I mean, that Goldie was a wild thing.

Goldie Hawn will be 57 in a couple of months' time, an age at which most Hollywood babes and sexpots have yielded to the sad generalization that young American men are afraid of older women, and don't want to get close enough to be able to admire all the craftsmanlike work that may have been done on them. I say "may" because I'm personally quite prepared to believe that Goldie is as taut as she is because of years in the gym, eating right and laughing a lot. I interviewed her about 20 years ago and she laughed all the time and wriggled in her chair in the way of those people who can manage a full workout in a coach seat. And she was a knockout -- and a terrific businesswoman.

I don't see any need to accuse Goldie of being a great actress -- though she was terrific in "Sugarland Express," very good in "Shampoo" and one of the few actresses who seemed to be capable of telling Woody Allen to stop being silly in "Everyone Says I Love You." I don't really want to have to go back over too many of the amiable comedies she has been in over the decades. But I do ask you all to notice the acuity of Hawn the producer, the clever Hollywood operator who has managed to produce "Private Benjamin," "The First Wives Club" and several other films, and who simply holds her place in Hollywood when more earnest actresses and more beautiful women grab their few years of stardom and run.

In "The Banger Sisters," Goldie Hawn and Susan Sarandon (who is only a year younger than Goldie) defy that wistful orthodoxy down-in-the-mouthed by so many Hollywood women -- that there are no parts for mature women. And it's patently true. While our veteran actors as they get to be 60 blithely snatch up much younger women -- on-screen and off -- American women of a similar age who dare to possess a sex life, romantic feelings, an awareness of power and money, and a good bod are reckoned to be witches, or insane, and very dangerous.

You can say that Goldie Hawn has been awfully cute with her "maturity"; that she remains, at heart, that hand-painted bikini-girl from "Laugh In," the one whose collapse into laughter whenever a man spoke to her promised all kinds of physical abandon. Well, why not? Anyone who takes the trouble to keep company with sexy old ladies knows that kittenishness (like boyhood) can go on forever -- just don't forget the kitten has claws.

So I don't ask Goldie Hawn to play Hedda Gabler or Lady Macbeth (not that it wouldn't be fun), but if ever anyone had the nerve in America to make a movie about a Donna Juanita, a woman beyond the age of child-bearing, but crazy about sex, Goldie Hawn could do it. Do you remember the way she seemed both amazed and turned on by all those strange new holes that kept appearing in her body in "Death Becomes Her"? Look at Goldie Hawn's eyes -- they're still standing up on stalks, as if she'd just seen her first male member.