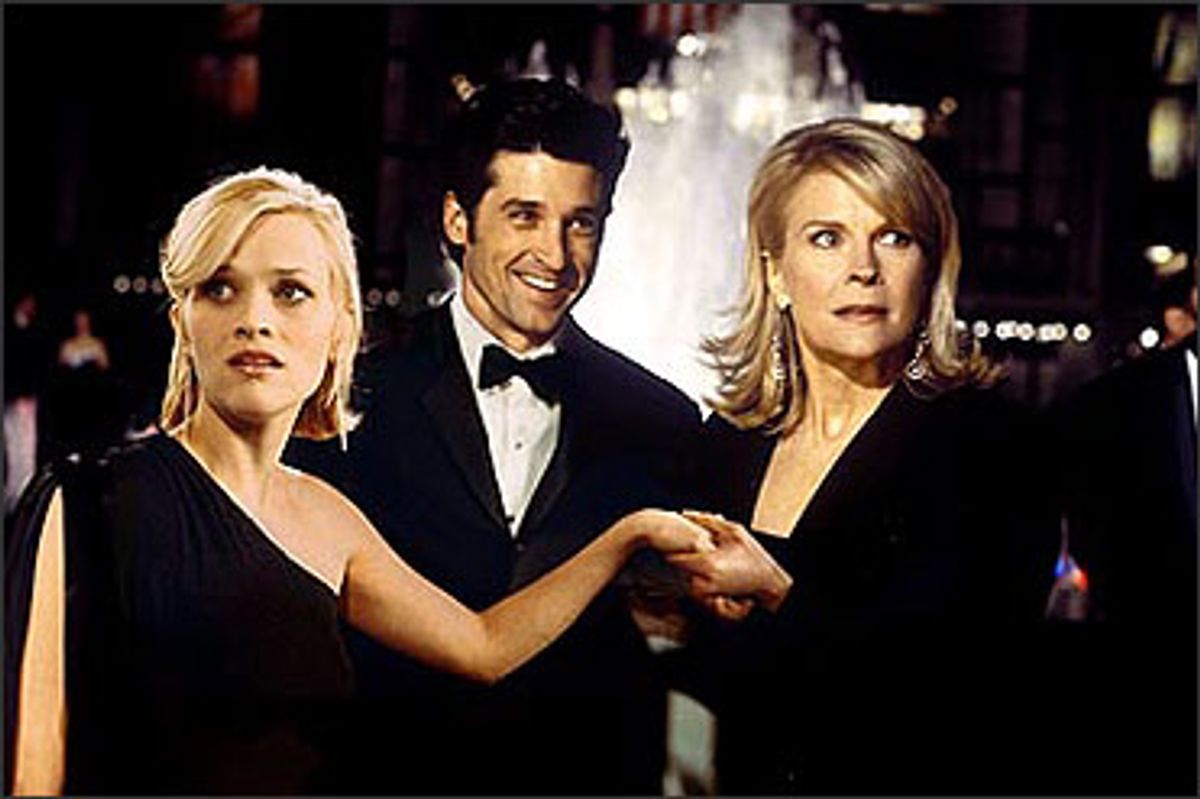 Forget the idea of making a romantic comedy with smart dialogue, appealing characters and the right ending -- why is it so hard to make one with an idea of why two people belong together? "Sweet Home Alabama" is a good-natured but massively flawed little comedy about a successful Manhattan clothing designer (Reese Witherspoon) who, before she can marry a handsome young political hopeful (Patrick Dempsey), has to return to her Alabama hometown to divorce the sweet but undistinguished husband (Josh Lucas) she left behind seven years earlier.

You can guess what happens, but that's not the point. The potential pleasure of "Sweet Home Alabama" should be seeing exactly how the right lovebirds end up together. But for all the movie's angular plot twists -- designed to throw us off the trail, although of course they never really do -- the chief problem with "Sweet Home Alabama" is that even by the movie's end, we have no idea why Witherspoon and Lucas are made for each other, other than the fact that they share the same background and both have a thing for glassware (don't ask). When we see them arguing bitterly, in the first 10 minutes of the movie, we know they're perfect for each other only because we know it squares with the traditional romantic comedy dynamic. But that's cheating. It's the job of the director (in this case Andy Tennant, who made the very enjoyable "Ever After"), the screenwriter (C. Jay Cox) and the actors to light up at least a few sparks to go on, and although we wait and wait, as far as figuring out how and why their relationship should work, we're left sitting in almost total darkness.

Witherspoon and Lucas try their damnedest, but the story keeps getting in their way. For one thing, when we find out the circumstances of their marriage, the reasons for the split are implicitly clear. But you never see either character wrestling with the choices, or the mistakes, they've made, which makes their reconciliation seem facile and implausible. Witherspoon's character is written (and played) as a troublemaking, fun-loving small-town girl who left home and never looked back, until she shows up again to make cruel, snotty remarks to her husband and her old friends. We're supposed to love her through all of it, but it's hard, given that her eventual transformation back into a hometown firebrand-sweetie pie feels so patched together.

Witherspoon is a terrifically appealing actress with fine comic timing, and she's got bite, too. But in "Sweet Home Alabama," she veers a little too close to lovable cuteness, despite the fact that her character spends a lot of time berating her beleaguered regular-guy husband. It would be awful to see Witherspoon end up as America's Sweetheart. The movie tries to give her some depth and complexity by allowing her some indefensible behavior: She plays a snob who has actually lied about her humble roots, claiming to have come from a rich Southern family instead of a working-class one. In a desperate effort to deny her own roots, she cruelly outs a hometown friend whom only she knows is gay, and makes nasty remarks to an old girlfriend (the lusciously sly Melanie Lynskey) who has chosen to remain in the town she grew up in and raise a family. The characters forgive her at the drop of a hat; we're the ones left holding a grudge. Our feelings about Witherspoon's character are led through a few too many turns; despite her crackling lovability, it's often hard to actually like her. And yet, by the end, we're supposed to believe that her returning home has somehow made her a better person.

"Sweet Home Alabama" does a few things right. It at least tries, with reasonable success, to call Northerners on some of the snobbery they still harbor toward the South: At one point Witherspoon, commenting on the working-guy grime on Lucas' skin, asks him bitingly, "Did they run out of soap at the Piggly-Wiggly?" The movie has the decency to show us how hurt (and angered) Lucas is by the remark, instead of just using it to get a laugh. "Sweet Home Alabama" also features some very likable supporting performances, notably those of Ethan Embry as a bright, sensitive small-town misfit and Candice Bergen as Witherspoon's witheringly snippy prospective mother-in-law (who also, in one of the movie's nicer touches, happens to be the mayor of New York).

But every time you look, "Sweet Home Alabama" is taking another bummer of a wrong turn. Minor spoiler ahead: It also blindly follows one of the most disappointing trends in modern romantic comedies. The plot requires that a decent, caring person be left behind at the altar (after footing the bill for the wedding, no less) -- and it's all supposed to be fine, since the jilter's little "mistake" ends up being a learning experience for everyone involved.

Of course, romantic comedies don't demand that their characters face up to the grimmest consequences of their actions -- they wouldn't be comedies if they did. But in the old days, filmmakers at least had the decency to make the jilt-ee a schemer or a cad or a phony (as in "It Happened One Night"), which absolved the audience of feelings of guilt and allowed us to feel the joy of the hero or heroine's eventual happiness. "Sweet Home Alabama" demands that we believe every one of Witherspoon's mistakes can be erased with one flash of her crooked smile, and charming as she is, it's a tall order. Not even the astute Witherspoon can pull off a character like that; in a smarter romantic-comedy universe, she wouldn't be asked to.