Jackie Chan is thoroughly wasted in a bad suit and a witless comedy. 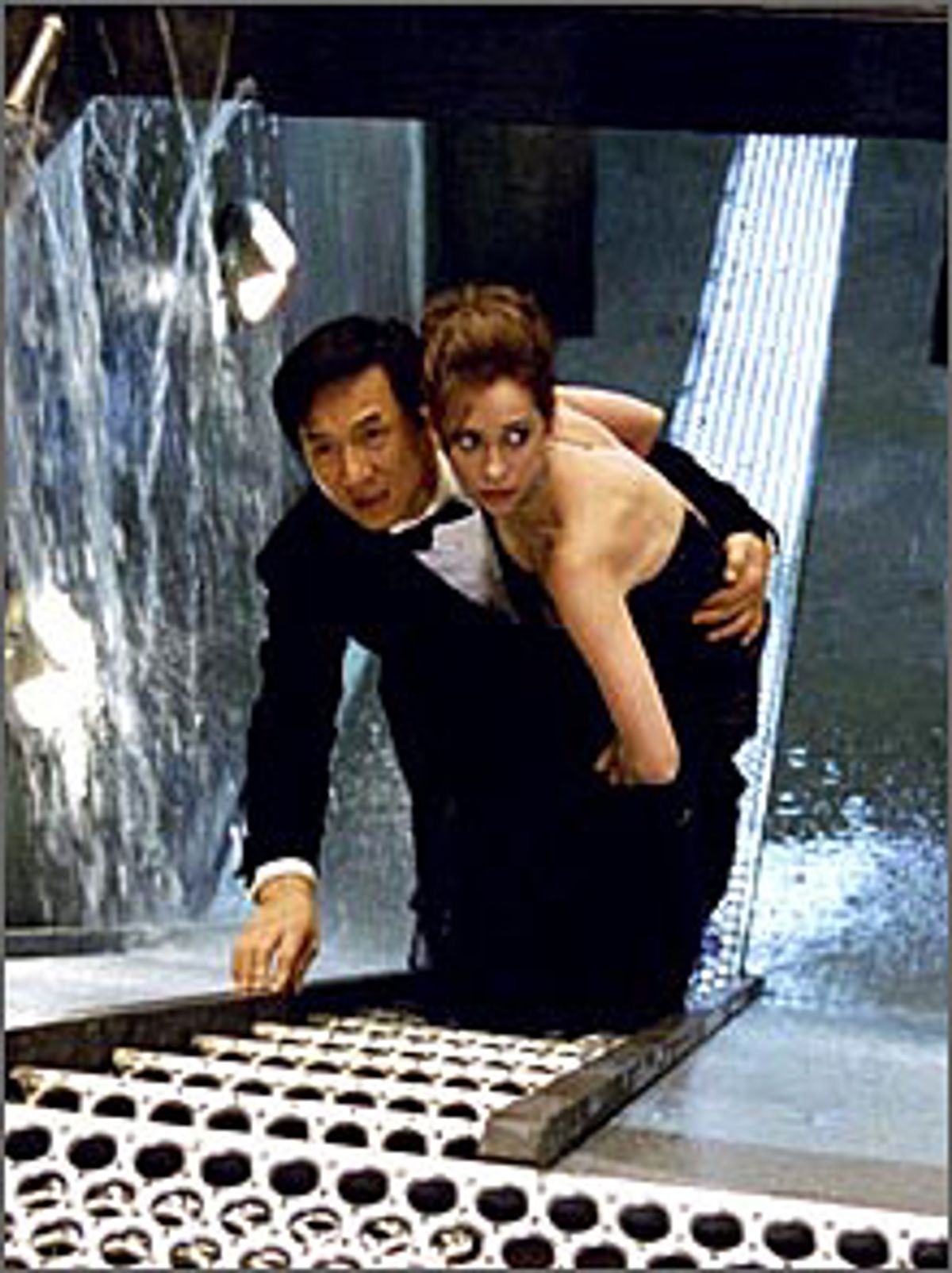 You can only marvel at the chutzpah of a movie in which Jennifer Love Hewitt plays an agent who tells a contact he can identify himself by saying the code phrase, "Nice rack." And you can only shake your head at a movie that, having gotten away with that, proceeds to stick the camera down Hewitt's blouse or focus on her breasts at every opportunity. When she precedes Jackie Chan up a ladder and tells him not to look up her skirt, you have to wonder why. The camera has already explored everywhere else.

Hewitt is trying to cast off her sweetheart image in "The Tuxedo," but her decision to play the role of an ambitious intelligence operative as incredibly grating isn't the way to go about it. I loved watching Hewitt in "Heartbreakers," in which she was like a mischievous little girl scrawling dirty pictures all over her squeaky clean image. She made a joke of her own sexiness and exuded a sense of naughty fun.

But the way she's used in "The Tuxedo" doesn't seem like such a big deal next to the way the movie uses Jackie Chan, who plays the chauffeur to an intelligence bigwig. When his boss is sidelined, Chan steps in, donning a tuxedo the military has engineered to give whoever wears it the ability to do everything -- from fighting hordes of bad guys to walking up walls to dancing the mambo.

It should take only a second to see the absolute perversity of that idea. The wonder of Jackie Chan is that he's an ordinary looking guy who is also one of the most amazing physical performers the movies have ever seen. He doesn't need the pretext of a wonder suit to astound us. The people who made this movie -- director Kevin Donovan and screenwriters Michael J. Wilson and Michael Leeson -- should be ashamed of themselves for betraying him in this way.

There's not a scrap of evidence in "The Tuxedo" that they consider Chan anything more than a bankable leading man. With a good portion of the physical feats in the movie accomplished via computer trickery, there's no reason why anyone couldn't have stepped into this role. And I'm assuming it's not perversity but the poverty of Donovan's craftsmanship (and I use the word loosely) that he sets up these elaborate physical gags and then ruins them with editing that prevents you from enjoying them.

I'm aware that after a lifetime of punishment, Chan may be slowing down and no longer able to do all he once could. But even if you take away all of Jackie Chan's dexterity and agility, what do you have? Only one of the most charming and likable presences in contemporary movies. Chan scaled down his physical feats in the delightful "Shanghai Noon." The movie called on his talents as a sweet goofball (and it found him the perfect match in another sweet goofball, Owen Wilson). In "The Tuxedo" Chan can still pull off jokes that absolutely shouldn't work, as when he uses a phony I.D. that identifies him as "Dr. Schwartz" and he tells the guard looking at it dubiously, "Shalom."

The plot has something to do with a bottled-water tycoon poisoning the world's water supply to amass a fortune. But as a colleague of mine observed, you know a movie is in trouble if, during the climax, it has to explain everything that's happening as it happens. Where were the minds of the people making this thing? Did they even notice that in one scene Hewitt drives a convertible and when she returns to her car a few moments later, it's turned into a sedan? Probably not. If you don't know what you have in Jackie Chan, how can you be expected to pay attention to anything else?

The press notes inform me that Donovan, who makes his feature film debut here, has won awards for his commercials for Salon Selectives, Wyndham Hotels, Pepsi and Miller Beer. It's beautiful, isn't it? Some hack makes a beer commercial and winds up trashing Jackie Chan. Who says this isn't the land of opportunity?