With a series of fiery speeches, the former vice president recovers his voice, his backbone and his place as the 2004 Democratic front-runner. 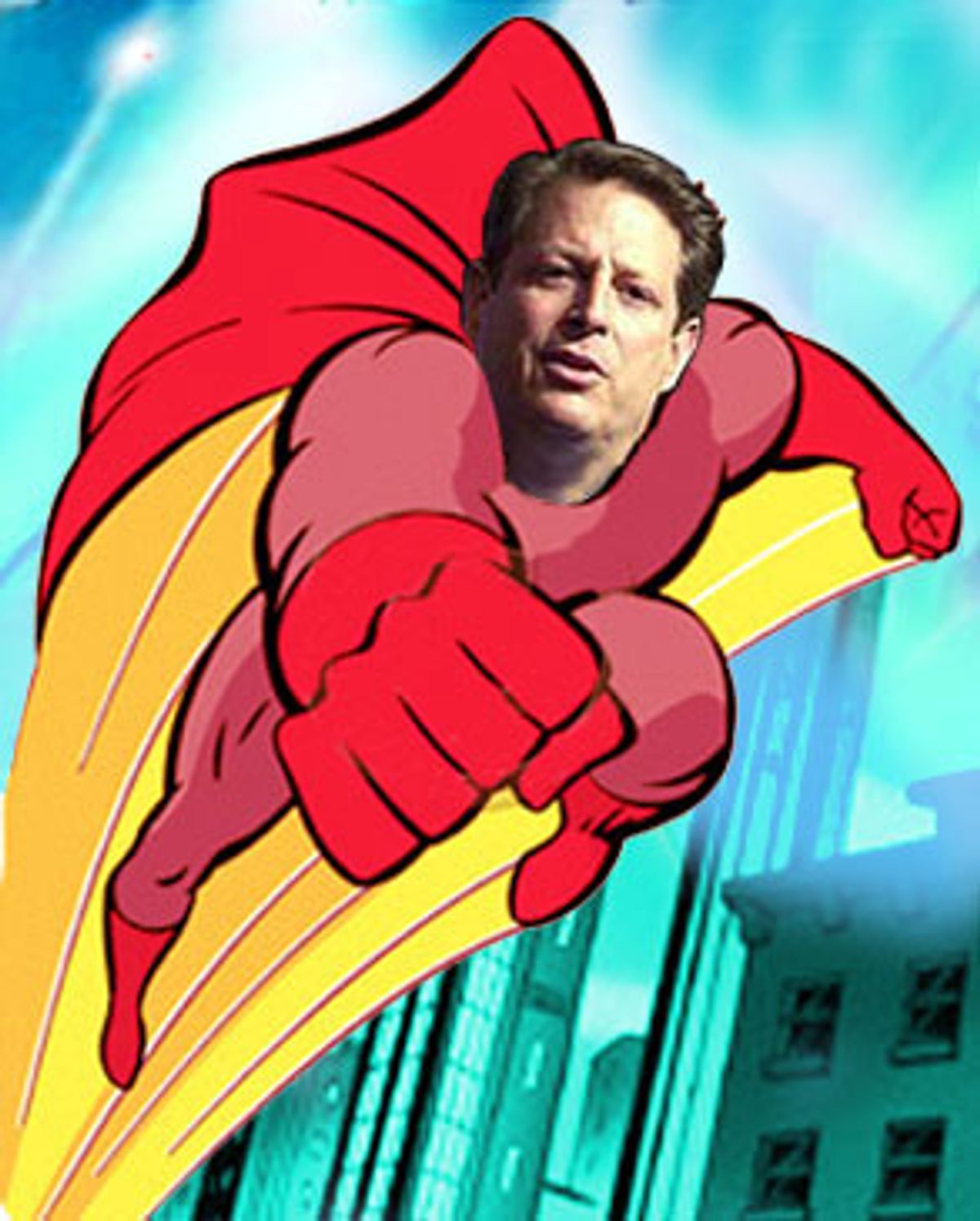 Better late than never, and better now than ever, Fighting Al Gore has emerged to lead his party. Just as congressional Democrats seemed ready to roll over and authorize the president's reckless war with Iraq -- Oh, let's just get the damn thing over before the election! -- the former vice president came out swinging, denouncing the rush to topple Saddam in a fiery San Francisco speech Monday. Later in the week, a newly feisty Gore blasted Bush on the economy, the intelligence failures that missed 9/11, and his administration's assault on civil liberties in the name of national security.

Gore's fighting words are exhilarating, and long overdue. They're particularly bracing given the demoralizing timidity of most Democratic leaders, who have been neutered in the year since 9/11 by the fear that criticizing Bush will make them seem unpatriotic -- a not entirely irrational fear, by the way, because GOP attack dogs regularly make that charge. But Gore seems refreshingly fearless. "What's going on nationally, with the attack on civil liberties, with American citizens in some cases just disappearing without right to counsel, without access to a lawyer, I think that is disgraceful," Gore said Thursday, in a speech in Wilmington, Del. "I think we need to stand up for our principles in this country and stand up for what this nation represents, even as we face the terrible dangers that we have to confront in the world today." He also accused Bush's Justice Department of spending more energy investigating a New Orleans brothel than monitoring al-Qaida. "Where is the sense of priorities?" asked Gore.

The former vice president was almost as blistering in a New Mexico speech on Tuesday that got little media coverage. He blasted Bush for the deficit-wracked "bad economy," borrowing from Ronald Reagan as he asked his audience, "Are you better off now than you were two years ago?" He decried Bush's "assault on the environment, the conscious decision to put polluters in charge of agencies that are supposed to protect the environment." He bashed Attorney General John Ashcroft in that speech too, for attacking civil liberties as well as spending $8,000 on drapes to hide the bare-breasted "Spirit of Justice" statue in the Justice Department building. "He put Lady Justice in a burqa," Gore quipped.

Not everybody likes the new Al Gore. A Republican National Committee spokesman called him a "hack," and a sputtering Charles Krauthammer termed his Iraq speech a "disgrace," while an even more unhinged Michael Kelly denounced it as "dishonest, cheap, low ... It was wretched. It was vile. It was contemptible. But I understate." (Adjust Kelly's medication now!) On Friday, White House press secretary Ari Fleischer took the same contemptuous line, sneering that "Al Gore changes his stories and his tune so often on so many different issues that it's not an effective use of time to pay much attention to what he says." Meanwhile Sen. Joe Lieberman, displaying the same habit of folding under GOP pressure that he did in Florida in 2000, rushed to the president-select's side: "I'm grateful President Bush wants to do this [invade Iraq], and I don't question his motives," Lieberman told reporters.

Lieberman is not the only old friend who turned on Gore. The New Republic also quickly piled on after his Iraq speech. The TNR turnaround is particularly stunning: The magazine fired Michael Kelly for his Gore-bashing in 1997, but now Gore's old friends at the magazine are smacking him almost as hard as Kelly is. TNR dismissed the San Francisco speech as "a political broadside against a president who Gore no doubt feels occupies a post that he himself deserves. But bitterness is not a policy position. In past moments of foreign policy decision -- first the Gulf War, then Bosnia -- Al Gore has championed the moral and strategic necessity of American power and thus offered a model for his party. We wish we could say that at this moment of decision he was doing the same." The unprecedented spectacle of TNR bashing Gore for his reservations about an Iraq war shows the extent to which protecting Israel -- publisher Marty Peretz's first love, even before Al Gore -- is the driving force behind the get-Saddam fever.

All I can say is, You go, Al. From the left and the right, many have questioned whether this is the real Al Gore, whether his new fighting attitude reflects his convictions or political calculations. I have no idea. But if it's driven by politics, it's certainly politically risky, because Republicans have been masterful, and vicious, about using opposition to the war to smear Democrats. And taking any kind of political risk is a step in the right direction for the preternaturally cautious Gore.

Whether or not Gore's newfound courage is genuine, it's certainly urgently needed. Clearly his tough rhetoric strengthened other Democrats' spines this week. Senate Majority Leader Tom Daschle -- normally mild-mannered to a fault -- came out swinging almost immediately after Gore's passionate Iraq speech, demanding that Bush stop demonizing Democrats for raising questions about his war on terror. Sen. Ted Kennedy followed up on Thursday, echoing Gore as he insisted that "war should be a last resort, not the first response ... It is inevitable that a war in Iraq without serious international support will weaken our effort to ensure that al-Qaida terrorists can never, never, never threaten American lives again."

The Democrats' timidity on Iraq has been appalling. Insiders are telling reporters that many in Congress will vote for the president's resolution authorizing the war, even though they oppose it, because they're afraid of the political cost of seeming antiwar. But political courage is needed, now more than ever. The administration's justifications for war change almost daily. Once again, the White House is claiming al-Qaida has links to Saddam -- Condi Rice says Saddam has trained bin Laden's men in using chemical weapons -- without offering proof. Bush himself seems to contradict Rice, saying Wednesday that al-Qaida could become "an extension of Saddam's madness" (if he's training them in chemical weapons, aren't they already an extension of his madness?). And on Thursday, at yet another Republican fundraiser, the president seemed to suggest a brand new motive: that when it comes to Saddam, this time, it's personal. "There's no doubt he can't stand us," he told GOP fat cats in Houston. "After all, this is a guy that tried to kill my dad at one time." I'm not sure that's in the latest version of the joint resolution authorizing the war.

What's most amazing about Gore's Iraq critique is the political firestorm it unleashed, which is just another measure of the way the Bush team has dominated the debate to this point -- with the acquiescence of the Democrats and the media. In his sober speech on Monday, Gore backed the administration's goal of "regime change" and called Saddam "evil." He noted that he'd been among a handful of Democrats who supported the 1991 Gulf War. He framed his critique in terms of the nation's capacity to fight a global war on terror at the same time as it mounts an aggressive assault on Saddam. Hardly Noam Chomsky-like stuff. In fact, plenty of Republicans and military leaders agree with his assessment -- yet only Gore is being vilified as a "hack" and a "disgrace."

But the man who won the presidential popular vote hasn't let that bother him, getting even bolder in his critique of the administration as the week progressed. The only thing disgraceful about his performance this week is that it reminded us how little we saw of this Al Gore during the 2000 election. If he'd been this feisty during the presidential debates, this courageous on the campaign trail, this tough during the Florida recount, he'd be president now. Gore ran a gutless campaign, and botched Florida, getting outmaneuvered by smart, nasty Republicans who seemed to want the White House more than he did. I told a Democratic-insider friend last month that I thought Gore was history. If he wanted my vote in 2004, I said, he'd have to come to my house and personally apologize for his lackluster last campaign.

The last week has turned me around. If Gore keeps hammering Bush, he'll have my vote, and plenty of others, too. Give-'em-hell Al is reasserting his claim on the Democratic nomination. If he's playing politics, that's fine with me. This is the way politics is supposed to be played: with conviction, and to win.