The Israeli leader has defied President Bush before and gotten away with it -- but not this time. 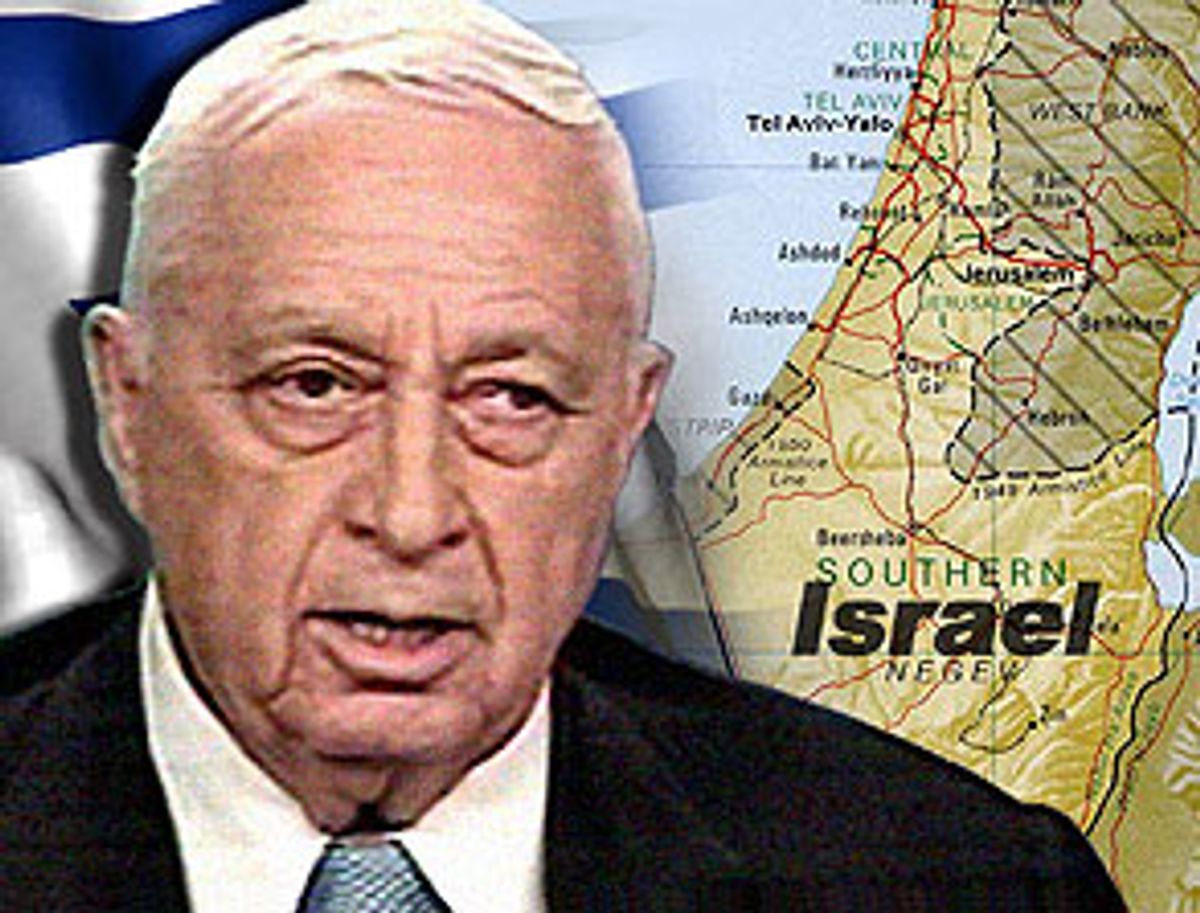 For the past 19 months, President Bush and Israeli Prime Minister Ariel Sharon have been on a long honeymoon. Bush has endorsed Sharon's aggressive tactics in Israel's two-year war with its Palestinian neighbors. He has made no attempt to hide his dislike of "Arik's" nemesis, Palestinian leader Yasser Arafat, whose ouster he has advocated. For his part, Sharon has made close coordination with Bush the cornerstone of his foreign policy, showing considerable diplomatic and political skill.

But then Sharon miscalculated, and his mistake proved that even Bush, who is shaping up as the most pro-Likud U.S. president ever, can be pushed too far. When Israel disturbed America's attempt to gather world support for an invasion of Iraq, the administration did not hesitate to tell it to get in line.

The event that triggered America's rebuke was Israel's 10-day siege of Arafat's office in Ramallah, which Sharon ordered in retaliation for a Palestinian suicide bombing that killed six people Sept. 19 in Tel Aviv. Under the barrels of Israeli tanks, bulldozers demolished what remained of the Palestinian Authority's government facilities, locking up Arafat and some 250 others in one semi-ruined building and allowing them modest food rations, electricity and telephone communications. Israel demanded the extradition of 18 "most wanted terrorists" residing with Arafat and refused to accept compromise proposals such as exile or a transfer to Gaza. In the end, however, nothing happened to the wanted Palestinians. Early Sunday, Sharon bowed to the American dictate and called off the siege. The military withdrew to its previous positions.

Arafat celebrated his small victory over Sharon, flashing the V sign and holding an aggressive press conference. But it was a very small triumph: Although Arafat was allowed to leave his office to tour the ravaged compound yard, he could not go farther, and while he improved his stance with a Palestinian public that has become increasingly disenchanted with him, American officials maintained their formal boycott on contact with him. Nor did Israel lift the curfews it has imposed on most of the West Bank's cities for the past five months.

Sharon made two miscalculations. The first was sending the army to smash the Muqata, as the Ramallah headquarters is known, in the first place. Leaving aside the P.R. problem this presented Washington in the middle of intense lobbying over Iraq, Sharon's move was seen by many in the Bush administration as smacking of outrage more than rational analysis: Although the White House loathes Arafat, it was not convinced that Arafat was responsible for or had any control over the Sept. 19 attack. The administration differs from Sharon in its assessment of and approach to the Palestinian Authority: While Sharon views it as completely corrupt and untrustworthy and would like to get rid of it -- and Arafat -- once and for all, the Americans take a slightly less harsh view, regarding the P.A. as gravely flawed but the only game in town.

Sharon's second miscalculation came when he balked at American requests to end the siege on Arafat and calm the situation. Even when the U.S. refused to use its veto and allowed the U.N. Security Council to demand Israel's withdrawal, Sharon ignored the message -- as he did when American ambassador Daniel Kurtzer, a religious Orthodox Jew, traveled to the prime minister's ranch on Saturday, the Jewish Sabbath, to pass on another angry message from Washington. The siege continued even when the president himself publicly called Israeli actions "not helpful." Sharon thought, perhaps, that he could get away with intransigence, just as he did last April when Bush demanded Israel's withdrawal from Palestinian cities, then failed to do anything when Sharon refused.

Sharon was wrong. This time around, the circumstances are entirely different. The U.S. is seeking support for its Iraqi campaign at the Security Council and throughout the Arab world. America's arguments to the international community about Saddam risked losing credibility if Washington was seen yet again as allowing Israel to flout the letter and spirit of U.N. resolutions. How could Bush demand Saddam's full compliance and ignore Sharon's defiance?

The moment of truth came last Thursday night, when the White House lost its patience and sent Sharon a blunt message. Only then did Sharon realize the game was over. The administration threatened to make the message public and promptly leaked it to the Washington Post on Saturday.

Sharon made a last-minute effort to save face and avoid an open break with Bush. Upon receiving the angry message, he hurriedly sent his bureau chief, Dov Weisglass, to Washington. Weisglass and ambassador Danny Ayalon met National Security Advisor Condoleezza Rice and read her Israel's position that the Ramallah operation was a reasonable response to a renewed wave of terrorism, which broke out after six quiet weeks. The Israeli officials tried to buy more time. But Rice made it clear that there was no room for compromise or flexibility and that Israel should leave the Muqata without delay. She told her guests that Israel's operation was not helpful to the American effort on Iraq, and that it hurt the important process of reforming the Palestinian Authority and nurturing a new, post-Arafat leadership. It only brought Arafat back to center stage, after months of decline. "We are well aware of your interests and sensitivities and expect you to understand ours," Weisglass told Rice, but she was not moved. Not this time.

Sharon waited until Sunday morning, the beginning of Israel's working week, to call defense minister Binyamin Ben Eliezer, foreign minister Shimon Peres and the military chiefs and give them his withdrawal order. He asked the ministers to admit bowing to American pressure ("You can't say no to your best friend"), but forbade any mention or acceptance of U.N. resolution 1435, which called Israel to withdraw its forces. Being seen as having yielded to the U.S. is one thing, to the U.N. another.

"The major winner was Bush," an Israeli official told me afterward. "If the Muqata crisis hadn't happened, he should have created it. Sharon's mistakes helped Bush regain his credibility in the Arab world and strengthened the American position vis-à-vis the Security Council."

The benefits for Bush were obvious. For the first time, he was able to show that he was not in Sharon's pocket even if he avoided using harsh language or showing personal dissatisfaction with the Israeli leader in public. But Sharon, too, may have benefited from the exchange: Since a regime change in Iraq is emphatically in Israel's interest, Sharon's "loss" could actually turn out, at least in certain respects, to be a victory. In any case, the close alliance between the Bush White House and the prime minister's office in Jerusalem is still intact. "The Americans told us that they are satisfied with the withdrawal decision, and the recent affair will not scar our relationship," a senior Israeli diplomat told me. The U.S. State Department instructed its diplomats in Israel to avoid any gloating or "we told you so" reactions.

Of course, the Ramallah siege was a minor event, without long-term strategic or ideological consequences like a true territorial withdrawal or a removal of Israeli settlements from the West Bank and Gaza. Still, it could be seen as a rehearsal for the "day after Iraq." If and when Bush moves to implement his stated vision of creating a Palestinian state within three years, he might find himself once again on a collision course with Sharon -- a scenario that is Sharon's worst nightmare.

How could have Sharon miscalculated so badly? He was well aware of the changing strategic environment. In July, Israeli military planners presented their medium-term assessment to the prime minister. They advocated that Israel refrain from escalating the war with the Palestinians until after the Iraqi war. They expected this "waiting period" to further weaken Arafat and strengthen Israel's position. Sharon accepted this view. But when terror attacks hit Israeli streets again, he followed his instinctive reaction and called for Arafat's expulsion. Defense minister Ben Eliezer and senior military and intelligence officials tried to block the idea, proposing as a compromise to put the Palestinian leader under siege. The cabinet duly approved the plan. A few ministers asked if it was going to work, but Sharon and the military reassured them. As could be expected, when the operation soured, most politicians and generals were quick to throw the blame onto Sharon. Only a handful of officials remained loyal and spoke about the "achievement" in "deterring the Palestinians."

Politically, Sharon suffered no real damage. By ordering the troops to the Muqata and then calling them back, he proved again that he has complete control over the government. He handled all the contacts with Washington personally and cut Peres and Ben Eliezer out of the loop, using them only to rubber-stamp his decisions. The angry and frustrated foreign minister burst into a tirade against the government's policy during Sunday's Cabinet meeting. However, Peres carries no stick. A few hours later, his Labor Party decided to avoid fighting Sharon over the budget, thus gluing itself even tighter to his "national unity" coalition. As for the right-wing members of the coalition, they have given Sharon their full backing, explaining that Iraq is more important now than dealing with Arafat.

As the confrontation with Sharon went on, American officials raised a sensitive question with their Israeli counterparts: If Israel acted so carelessly in the face of a suicide bomber, what would it do under an Iraqi missile attack? So far, Sharon has shown more responsibility on the Iraqi issue. After months of pledging to "implement our right to self-defense" in case of an Iraqi attack, he changed his tone and started to climb down the bravado ladder. Knowing that just as in the 1991 Gulf War, Washington needs to handle Saddam on its own and is opposed to Israeli intervention for political reasons, Sharon told the Jerusalem Post last Friday that an Israeli reaction would not be automatic. If there were no casualties and the Iraqis did use nonconventional weapons, Israel would not retaliate. Instead, he said he expected the Americans to do more than they did in 1991 to prevent missile launches against Israel.

This policy could prove useful in avoiding Israeli participation in the war, while defusing domestic pressures to "do something" when attacked. In 1991, Israel was hit by 39 Iraqi Scuds but did not retaliate, bowing to American demands to sit tight and let the U.S. finish the job. In great likelihood, the same scenario would repeat itself unless a major, multi-casualty catastrophe changed the rules of the game. Alternatively, the Iraqis might not attack Israel after all, and Tel Aviv residents would not have to reach for gas masks when the American forces hit Baghdad.