Three high-ranking moderates in the U.S. Senate say it might be enough to disarm Saddam. But the White House presses for regime change "in whatever form it takes." 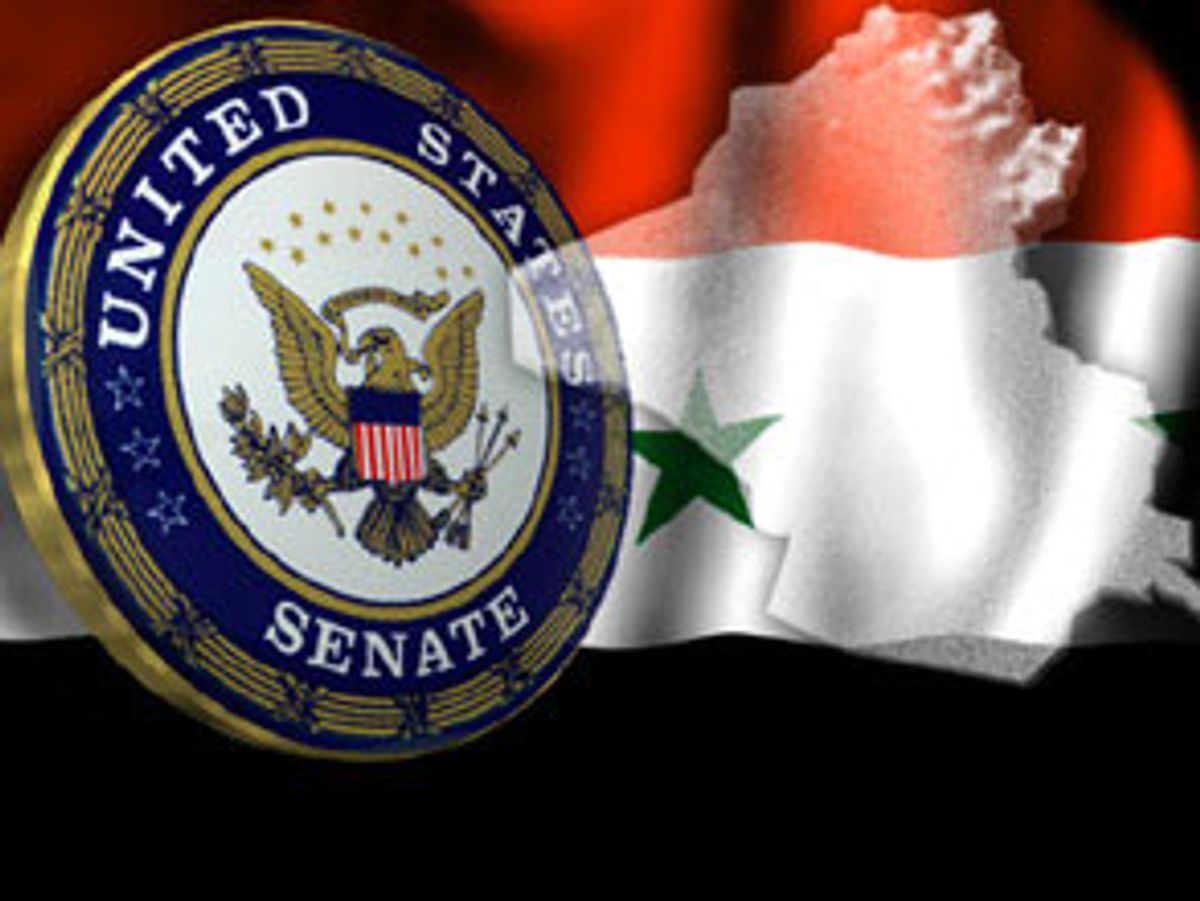 A group of centrist U.S. senators -- including some of the most respected voices on foreign policy in both parties -- came out Tuesday against the Bush administration's policy of toppling Saddam Hussein, saying the focus instead should be on disarming him. But even as the White House privately dispatched National Security Advisor Condoleezza Rice to negotiate with the group, the White House publicly stated its commitment to ousting Saddam Hussein in its strongest language to date.

In fact, White House spokesman Ari Fleischer all but put a price on Saddam's head in a White House press conference. When asked by a reporter if the White House hopes Saddam "ends up dead in all this," Fleischer responded: "Regime change is the policy, in whatever form it takes."

As the White House uses its leverage to force a congressional vote on Iraq before the November elections, it appears now that there will be at least one, and perhaps two, alternatives to the White House proposal when the issue comes to the Senate floor.

That news came on a busy day of Iraq diplomacy, both at the United Nations and the State Department. Iraq said it would allow U.N. weapons inspectors to return to Baghdad, with experts expected on the ground in Iraq within two weeks. But even as Iraq seemed to bow to U.S. pressure, Secretary of State Colin Powell called on the international community to keep turning up the heat on Saddam Hussein. Powell said the United States would still push for a new resolution at the U.N. Security Council explicitly authorizing the use of force in the event the weapons inspectors are turned away. Russia, France and China, which all hold veto power at the Security Council, have expressed reservations about such a resolution.

Levin's resolution emerged Tuesday as the vehicle backed by the Senate's small antiwar faction. The White House resolution is misguided, he said, adding that disabling Saddam's weapons of mass destruction should be the objective.

"The purpose of this should be disarmament, not regime change," said Levin, a member of the Intelligence Committee. He took issue with Bush's assertion that there is a "high risk" Iraq will launch a surprise attack against the United States, saying the claim "is totally without support in the intelligence community."

While Powell wrestles with dissent at the U.N., Rice was dispatched to Capitol Hill to negotiate with domestic critics of the White House's Iraq plans, holding both morning and afternoon meetings with Lugar, who serves on the Intelligence Committee and is typically a close Bush ally.

But, Lugar said, unlike the Levin proposal, his plan "reserves the right to act unilaterally if the Security Council fails to approve a new resolution requiring the dismantlement of Iraq's weapons of mass destruction in a timely fashion."

"We felt that there should be more searching for allies and reaching out," Lugar said. Among the reasons Lugar cited for seeking more international cooperation is the issue of the estimated $13 billion cost for a war in Iraq. "We've got to get them on board to help pay for this war," he said. "It's going to have a big impact on the American economy."

At the White House Tuesday, President Bush expressed opposition to the Biden-Lugar proposal, saying, "I don't want to get a resolution that ties my hands."

When asked about Bush's comments, Lugar replied, "The president misunderstood our resolution if he felt he was restricted in any way."

Senate Minority Leader Trent Lott, R-Miss., also sounded skeptical when asked about Lugar's plan, saying, "We don't want to limit [a resolution] down with words or terms of art."

Sen. Richard Durbin, D-Ill., acknowledged that the White House could pass whatever kind of resolution it wants, but said the administration's willingness to tinker with the wording of its plan will affect how many senators wind up voting for the authorization of force.

Durbin estimated that at least 40 Republicans and about "10 to 15 Democrats, maybe more," would support the current White House proposal. He estimated another 15 would probably wind up supporting the Levin proposal. The rest, a group that includes Durbin himself, would make their decision based upon the results of ongoing negotiations between Lugar and White House officials, he said.

While the White House is reluctant to tinker too much with its resolution, administration officials are also seeking broad bipartisan support. White House officials say a divisive debate on Iraq would send the wrong message to Saddam Hussein -- that America is ambivalent, and perhaps unwilling to use military force to back up its threats.

Discussion of the Iraq resolution is expected to begin in Senate committees as early as Wednesday, and could make its way to the Senate floor by next week. When it does, Levin said, he will present a resolution calling for the United States to work through the United Nations, and stopping short of authorizing the use of force in Iraq if the U.N. doesn't act.

With Levin's determination to move ahead with his proposal, the congressional debate over the use of force in Iraq is beginning to mirror the fight the administration is dealing with in the United Nations. There were reports Tuesday that Secretary of State Colin Powell had ordered State Department employees to draft two separate resolutions on Iraq -- one that simply calls for the return of inspectors to Iraq, and another approving the use of force in the event of noncompliance -- staking out a more incremental approach said to be favored by France and Russia.

"My resolution does not get to the issue of what happens if the U.N. does not act," Levin said. "If and when that happens, then I think the president should come back to Congress, and we can deal with that issue."

But such a protracted diplomatic dance is precisely what the White House is trying to avoid. While the administration seems perfectly willing to press ahead despite Levin's counterproposal, Bush seemed far more concerned about a bloc of Republican and Democratic senators -- including some of the most respected voices on foreign policy in both parties -- who still have concerns about the revised White House resolution.

Clearly, as the congressional leadership and the White House move full speed ahead on the Iraq issue, many on Capitol Hill still have questions about the possible war effort. Durbin said the White House and congressional leaders were making a huge mistake by pressing to have this vote before the November elections. "I'm very concerned that we're doing this in such a politically charged atmosphere," he said. "I don't believe we're going to see the Senate at its best here."