Reflections on Isabelle Huppert's sadomasochistic mysteries in "The Piano Teacher." 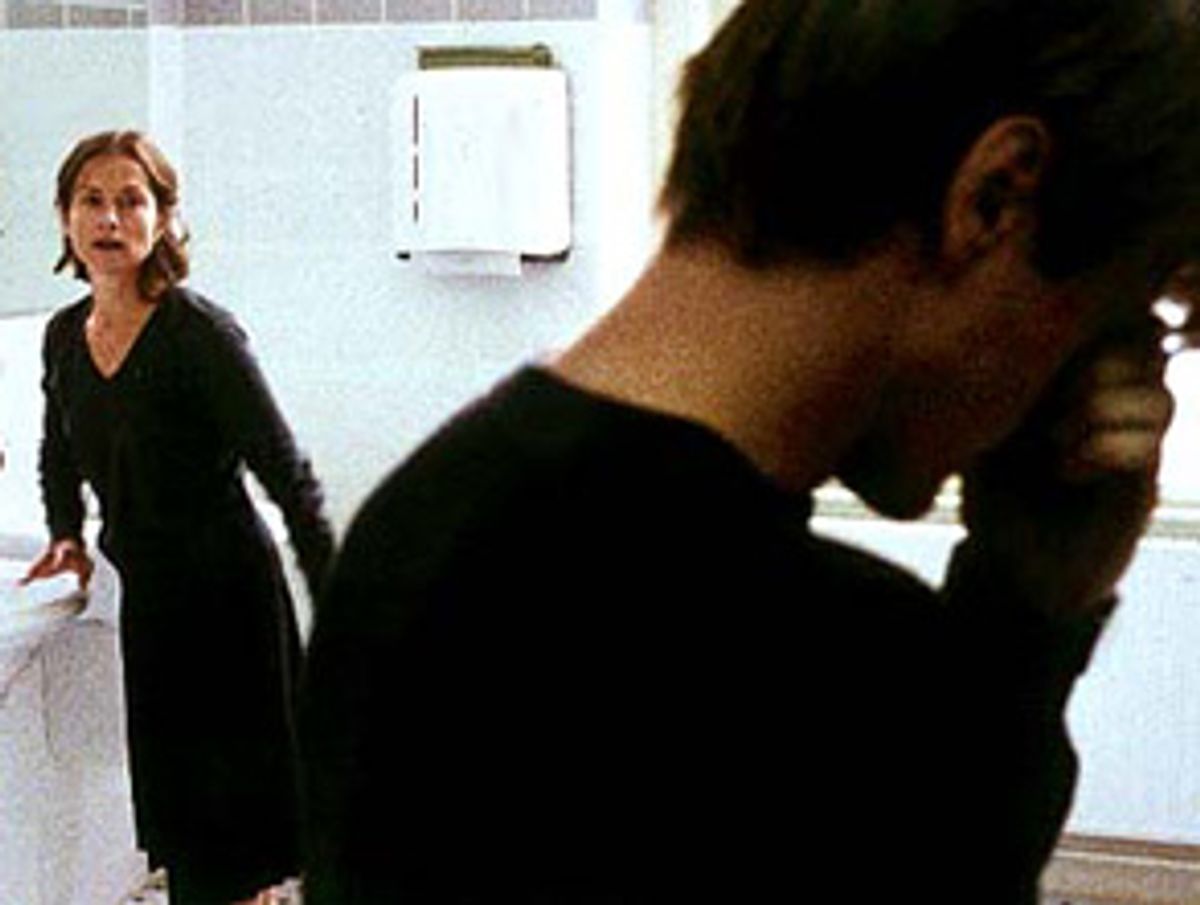 It's not that I think Michael Haneke's "The Piano Teacher" is a great film -- or even, beyond doubt or argument, a good one. Still, it will be released on VHS and DVD in early November, and it seemed to me as I watched it alone (as it were), in my room as opposed to a public space, that it had become an intriguingly different film. Then, as I thought about the very strange and rather aloof ways in which it hovers over such topics as high art and pornography, soaring romantic love, and abnormal sexual behavior, I began to see it as a model for the way sex can (and cannot) be handled in modern cinema.

So this is the first of two reflections on "The Piano Teacher" -- coming to your private place soon.

Erika Kohut lives in Vienna but speaks French -- like all the film's characters. In one synopsis of the film, I saw that Erika was said to be "pushing 40." But since Erika is, in every shot as far as I could see, Isabelle Huppert, then I'm bound to conclude that Erika is 45, which was Huppert's age when the film was released. And it's not just that she is Isabelle Huppert -- she also looks like Huppert. By which I mean to say that Erika has graciously yielded to the stardom and what you might call the severe, or the austere, or the harsh, or the numb beauty of Isabelle Huppert. We can leave that decision for the moment, I think, but it is clearly important that Erika is a movie star.

What else do we know about Erika? Well, she has a father, but he is dying and he is apparently insane -- though nothing is offered as to the coloring of his disturbance. Erika has a mother, with whom she lives in a small apartment. I'm not sure that it is technically small, but it is not large enough for the emotions of these two women. There is a quiet but raging animosity between them. At the same time, nothing begins to explain why Erika has not moved away to live on her own. This omission is all the more apparent in that, spiritually, Erika seems to have such a need to be solitary or removed. So her mother is a daily ordeal, and a denial of privacy.

Erika teaches piano -- not just children whose parents yearn for the gentility of pianistic skill in their young ones, but at the Vienna Conservatoire. She teaches people who may become great pianists. She is strict, humorless, demanding in all of this, and she seems to identify with the immaculate rendering of such masters as Schubert and Schumann, models to whom all students must aspire. The look on her face when the music is being played -- and this is Ms. Huppert's eloquent, graven face -- is sublime but unrelenting, like that of an implacable nun.

On the other hand, Erika has a strange, furtive "private" life. In the bathroom of their apartment, while her mother is shouting out that dinner is ready, Erika, in her robe, steps into the bath, and then using a mirror, she applies a razor blade to her sexual parts. We do not see where or what she cuts. But afterwards there is blood in the tub that she must clean away, scrupulously, before dinner.

These things are observed without any attempt at explanation or moralization -- of course, this tends to make them all the more private or insular. But we are in something like the same privacy, watching in our room, and we are likely to wonder why Erika is like this. Or whether she is happy or unhappy.

She has a new student, Walter. He is a promising student, but all he promises Erika is to say that he loves her and desires her. She is prepared to deny access, but then she gives him a letter in which she says that he can have her if he will follow exactly the several instructions she gives him for her masochistic satisfaction. He is offended, or shocked. He refuses the contract. But he is too much drawn to her and, very soon, will attempt to find a way to negotiate his love and her relentless code of sadomasochism.

We are going to have to watch. (To be continued.)