Bush judicial nominee Miguel Estrada is beloved by Ann Coulter and the right. But with no paper trail about his views, opponents will have a tough time rejecting him in the Senate. 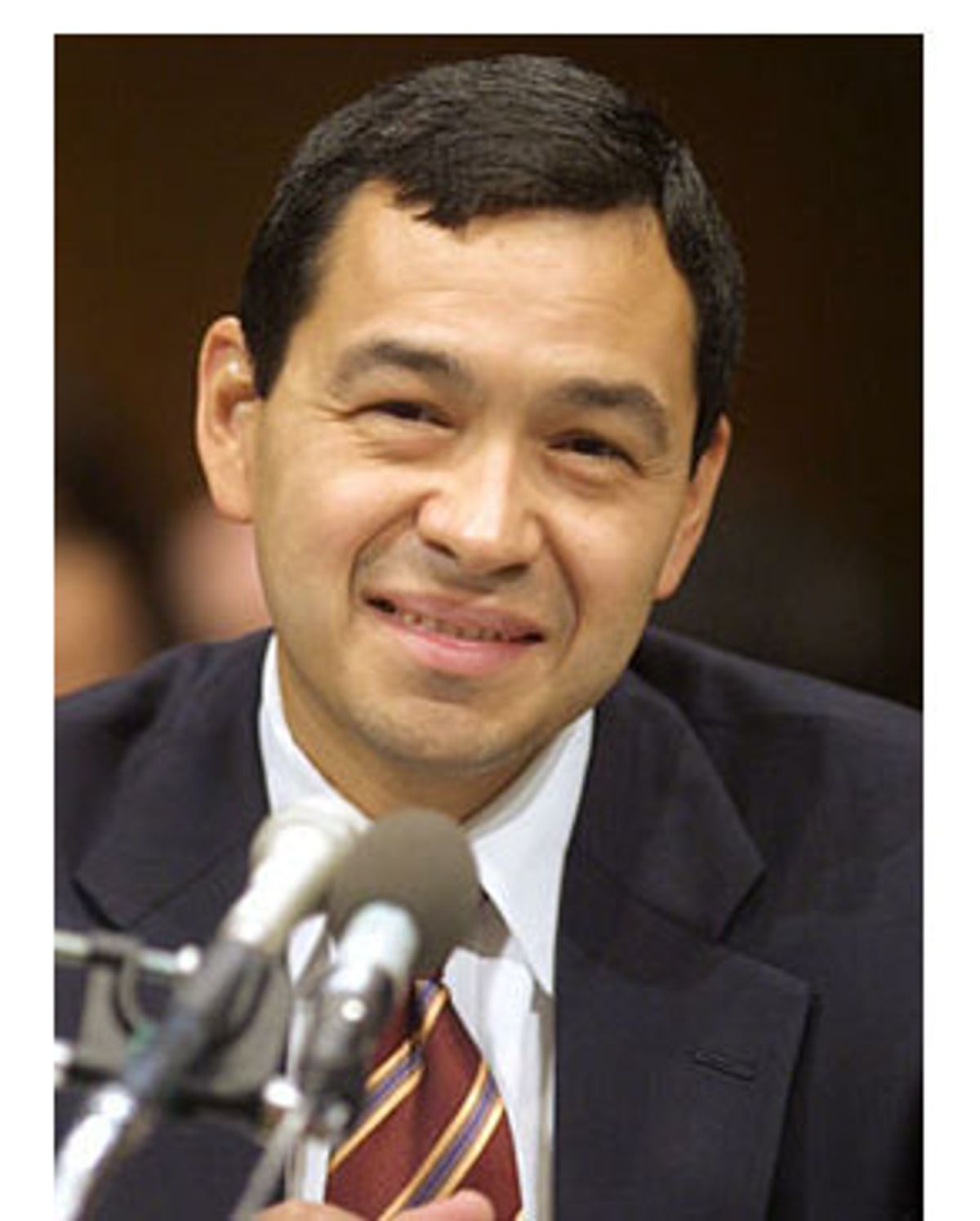 Liberal activists consider Miguel Estrada, who President Bush has nominated for the D.C. Circuit Court of Appeals, to be a right-wing extremist. Some say Bush's nominee to the nation's second-highest court is as conservative as Charles Pickering and Priscilla Owen, two Bush appeals court nominees rejected by the Democrat-controlled Senate Judiciary Committee.

The problem is that, despite holding hearings last Thursday, Estrada's critics can't prove it. He may well be the reactionary some claim, or he may not. Certainly he's left no writing to prove either case. Instead, most of the damning evidence his opponents can muster lies in the vague realm of reputation. He is, after all, a man who is thanked in the acknowledgements of Ann Coulter's slanderous book "Slander." But while Estrada and Coulter are both members of the conservative Federalist Society, and Coulter has defended his nomination, no other association between them has been found. And dubious accolades aren't quite grounds for rejection.

So Democrats are in the unhappy position of trying to find other reasons to defeat Estrada's nomination. They'll need unanimity among the Judiciary Committee's 10 Democrats to vote him down, which will be tough. There's nothing obvious to disqualify Estrada -- like Charles Pickering's record on race and voting rights, or Owen's history of anti-abortion judicial activism. At this point, the Democrats' best chance at keeping Estrada off the federal bench is to refuse to vote on him altogether. But according to Michael Gerhardt, a professor at William and Mary School of Law and author of "The Federal Appointments Process," "The fact that they held the hearing makes it likelier that they'll take a vote."

Elliot Mincberg, vice president of the D.C. civil liberties advocacy group People for the American Way, concedes that some of the group's wariness toward Estrada comes simply from the enthusiasm with which he's regarded by conservatives.

"One of the things it's based on is the chatter among right-wing activists who are constantly talking about how they believe that Estrada will be very far to the right on a range of different issues," he says. There's also concern, Mincberg says, based "on discussions we've had with people who have known him -- [discussions] that they are not willing to do for the record."

Although Paul Bender, Estrada's former boss in Clinton's Justice Department, calls him a "right-wing ideologue," most of the other information about Estrada's views comes secondhand, from people who've worked with him and don't want to go on the record. In a Sept. 19 article in the Nation, two lawyers accused him of weeding out liberal law clerks while doing interviews for Supreme Court Justice Anthony Kennedy, but both remain anonymous.

Because he never worked as a judge or law professor, Estrada's stands on controversial issues have to be inferred from his clients, his work on Bush's behalf during the Florida recounts and the groups that support him. The Judiciary Committee has tried to obtain memos he wrote while he was a lawyer in the solicitor general's office during the 1990s, but it's highly unlikely that the Bush administration is going to release them. The Republicans seem to have found the perfect stealth conservative.

"[Democrats] have got less to shoot at," says Gerhardt. "[Estrada] has not been known to take controversial stands. One of the challenges in the Estrada confirmation proceeding, if one's disposed to resist his confirmation, is to find some substantial basis on which to do that. There's less of a paper trail."

So groups that oppose him appear to be grasping. In a letter to the Judiciary Committee, People for the American Way notes, "As a lawyer in private practice, Mr. Estrada has expended significant time and effort in seeking to defend so-called anti-loitering statutes and ordinances, which have been demonstrated to disproportionately harm African-Americans and Latinos."

Similarly, Nan Aron, president of the Alliance for Justice, a coalition of liberal groups, says vaguely that "there's evidence to suggest that he would not be fair and impartial on issues regarding civil and women's rights," but she admits there's no red flag.

Clearly, most senators are going to need stronger justifications if they want to reject Estrada. It doesn't help them that the Honduras-born lawyer is the first Hispanic nominee to the D.C. Appeals Court. The Congressional Hispanic Caucus opposes him, saying, "The appointment of a Latino to reflect diversity is rendered meaningless unless the nominee can demonstrate an understanding of the historical role courts have played in the lives of minorities in extending equal protection under the law." But Estrada has the support of some Latino groups, including the League of United Latin American Citizens and the Hispanic Bar Association.

Republicans are gleefully playing the race card. One Judiciary Committee staffer says that if Democrats reject Estrada, "People [will] start identifying the Democratic party strategy for what it is -- to keep both blacks and Hispanics in an intellectual ghetto. A rejection of Estrada would be a very big mistake for Democrats. It would certainly create a backlash against any attempt by Democrats to argue that they are the defenders of minority advancement in this country." Such sentiments could make it hard for Dianne Feinstein, a California Democrat who needs Hispanic support, to oppose Estrada. The normally talkative Feinstein had no comment when her office was asked about her stand on the Latino nominee.

So what are liberals to do? After all, suspicion about Estrada isn't baseless. His former boss Paul Bender, the principal deputy solicitor general from 1993 to 1996, told the L.A. Times that Estrada is so "ideologically driven that he couldn't be trusted to state the law in a fair, neutral way ... He has an agenda that's similar to Clarence Thomas."

And many believe he's on a Thomas-like trajectory -- to the Supreme Court. It's "very likely," says Aron, that Republicans plan to nominate Estrada to the highest court. "I think they have a very clear idea of what he's being groomed for. The hope is he would be elevated as Clarence Thomas was to a seat on the Supreme Court." And since he's only 41, he would likely be there for a long time.

For some senators, that, along with uncertainty about his real views, might be enough to oppose him. "Some members believe the burden is on the nominee to demonstrate that he or she merits confirmation," says one Democratic staffer. This, of course, is a very different interpretation of Congress's constitutional "advise and consent" requirement than that promulgated by the White House, which believes the presumption should be with the president's pick. Both views are valid, says Gerhardt, and Estrada's confirmation depends on which prevails. Some congressmen "might feel like they're being asked to sign off on a blank check. Others feel the president is entitled to deference, and Estrada's qualifications look rather strong," he says.

To sway Democrats who might hold the second view, Estrada's opponents need something besides rumors of reactionary tendencies.

Liberals found a small hook for their opposition last week, when Estrada seemed to prevaricate before the Judiciary Committee in response to charges from the Nation about his blocking of liberal law clerks. When Schumer asked him about the Nation article, Estrada denied it. That afternoon, he backtracked, saying he was skeptical of candidates whose views were too rigid in either direction. Yet he refused to give Schumer a yes or no answer to the question of whether ideology mattered in his recommendation of clerks, causing the senator to say, "I think we have some credibility problems here."

Yet as far as smoking guns go, that seems like a rather minor one. Mincberg says that whether it will have an impact depends on whether others come forward, and so far they haven't. Adds Elliot Slotnick, a political science professor and expert on the confirmation process at Ohio State University, "A lot of other issues will be more important in evaluations."

At the moment, though, Democrats only have one other issue -- the Justice Department's refusal to turn over Estrada's memos from the solicitor general's office. But this isn't the nominee's doing -- he's signaled his willingness to have the papers released. Opposition to the committee's request is bipartisan. All seven living former solicitor generals, including Clinton's Walter Dellinger and Kennedy's Archibald Cox, signed a letter to the Judiciary Committee saying, "Any attempt to intrude into the office's highly privileged deliberations will come at the cost of the solicitor general's ability to defend vigorously the United States' litigation interests -- a cost that also would be borne by Congress itself."

Unable to accuse him of hiding anything, Democrats are basing their opposition on the notion that they can't vote for Estrada because they don't know how he thinks -- even though it's fairly clear that they're against him precisely because of how they suspect he thinks. "For some members it's going to be hard to vote on this nomination without solicitor general memos," says a Democratic committee staffer. But clearly the memos are only necessary to help reject Estrada, not confirm him. "People who oppose Estrada can oppose him without the memos, but they'd like to have them because they can make an easier case," says Slotnick.

And there may well be a case to be made. After all, Bush doesn't have a mandate to pack the courts with judges culled from the right-wing fringe, and he's certainly seemed to want to do that with many of his early picks. "This White House is more ideological in its selection of nominees than past White Houses have been, even President Reagan's," says David Carle, spokesman for Senate Judiciary Committee chairman Patrick Leahy. Even if doubts about Estrada are only a matter of guilt by association -- his association with the president's more extreme picks -- liberals have reason for those doubts.

When Schumer held hearings in June 2001 on the role of ideology in the judicial selection process, part of the reason was to avoid situations in which senators are forced to hunt for a pretext to reject nominees they consider extremist. Schumer argued it was better to honestly consider the intersection between political beliefs and judicial temperament.

"This gotcha aspect, the irony is that [avoiding] this was Schumer's whole rationale for his whole one-man campaign to introduce ideology into the confirmation process," says a Republican Judiciary Committee staffer. So in this nomination, Republicans are trying to keep Estrada's ideology, the issue on everyone's mind, off the public record. And so far, they're succeeding.