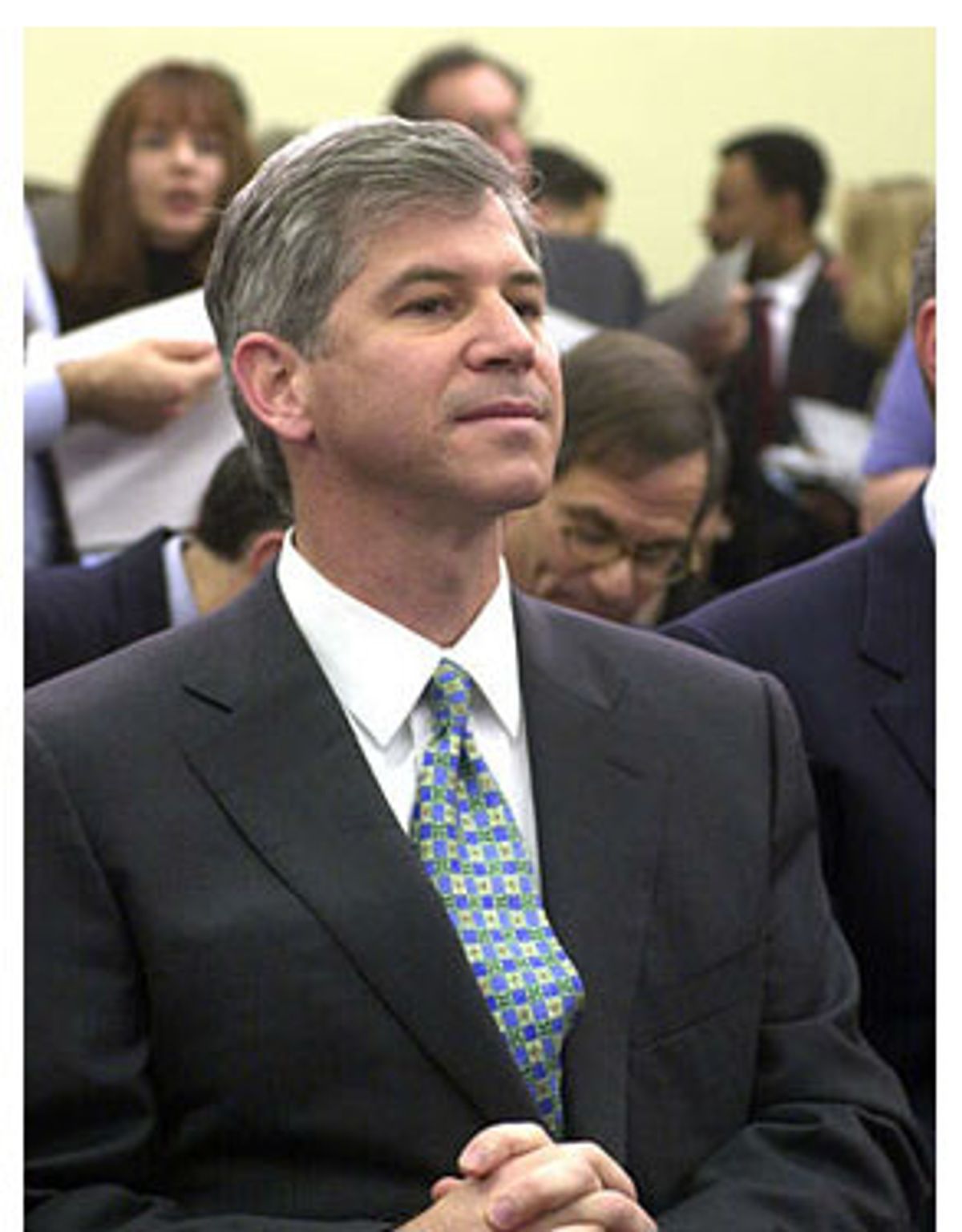 In addition to the multiple criminal and civil charges filed against him on Wednesday by federal authorities, former Enron chief financial officer Andrew S. Fastow may be facing more problems -- and his parents might, too.

Four days before Enron Corp. filed for bankruptcy, the Fastow Family Foundation, a nonprofit trust controlled by Fastow, paid more than $13,000 in moving expenses incurred by his parents, Carl and Joan Fastow, who moved from New Jersey to Houston in the summer of 2001.

The expenditure is significant now that federal prosecutors have moved to seize about $37 million in assets held by the Fastow family, a sum that includes $4.6 million held by the Fastow Family Foundation. The use of the foundation's money to pay the moving expenses appears to violate IRS regulations, which prohibit the use of foundation funds for personal expenses.

Documents obtained by Salon include a copy of a check for $13,022.38, issued on Nov. 28, 2001, from the Fastow Family Foundation's account and signed by Carl Fastow. The check was made out to Graebel/Houston Movers. A notation on the check indicates it as being written to pay for invoice number 4418076. Salon also has a copy of invoice 4418076 from Graebel/Houston Movers, which shows the company moved six tons of furniture from Morris County, New Jersey, to Harris County, Texas. The transferee on the Oct. 9, 2001, invoice is listed as "Fastow, Joan."

The documents come as federal investigators begin their prosecution of Andy Fastow, who set up Enron's myriad off-balance-sheet partnerships. On Wednesday, Department of Justice authorities in Houston charged Fastow with securities fraud, wire fraud, mail fraud, money laundering and conspiracy in connection with Enron's collapse. If convicted on the charges, he faces up to 140 years in prison. That same day, the Securities and Exchange Commission filed a civil complaint against Fastow that accuses him of misrepresentation, fraud and the improper sale of his Enron stock.

Investigators are particularly interested in the Fastow Foundation because it was capitalized with money obtained from one of Fastow's off-balance-sheet partnerships. On March 20, 2000, the foundation contributed $25,000 to an entity called Southampton Place L.P., the same name of the ritzy central Houston neighborhood where Fastow and a close associate of his at Enron named Michael Kopper both owned homes.

On May 1, 2000 -- less than two months after tossing in the $25,000  the foundation received $4.5 million from Southampton. The money was proceeds from the settlement of a stock derivatives contract between Enron and Southampton that Enron president Jeff Skilling wanted to dissolve.

Later in 2000, the suddenly-flush-with-cash Fastow Family Foundation -- which lists Andrew Fastow as president and treasurer -- gave away tens of thousands of dollars to a variety of Houston charities. The donations included $5,000 to a local Boys & Girls Club, $25,000 to the Menil Collection, a prominent Houston art museum, $10,000 to the United Way, and $9,600 to Congregation Brith Shalom, a Houston synagogue.

According to the foundation's 2000 filings with the IRS, it is a 501(c)(3) nonprofit organization, a designation that prohibits it from what federal rules call "self-dealing." IRS Publication 578 defines self-dealing as "any sale or exchange of property between a private foundation and a disqualified person." The rules clearly state that all of the foundation manager's family members are considered "disqualified."

The foundation -- which apparently hasn't filed its 2001 Form 990 paperwork with the IRS -- will likely be hard pressed to prove that Carl and Joan Fastow are qualified charities, says one expert in the field. "I don't think it's defensible at all and I think the IRS would agree," said Rushworth Kidder, president of the Institute for Global Ethics, a Maine-based think tank that provides ethics training for charitable foundations. Family foundations and other tax-exempt charitable foundations have to give their money to qualified parties, said Kidder. "It's sometimes a problem for families to understand that when they create the foundation, they get a significant tax deduction but it's not their personal money."

According to two former Enron employees who spoke to Salon on condition of anonymity, the moving bill from Fastow's parents was originally going to be paid by Enron. But by mid-October, when the energy giant was preparing to pay the bill, Enron was souring on Fastow. The company fired him on Oct. 24, 2001, the day after he admitted to two Enron board members that he'd made $45 million from his off-balance-sheet deals.

After handing the former CFO his walking papers, the company sent the invoice back to the Fastows, and the foundation paid the moving company a little more than a month later.

On Aug. 21, Kopper agreed to plead guilty to federal charges of money laundering and wire fraud. In exchange, he promised to help federal investigators in their pursuit of Fastow and other Enron miscreants. As part of the deal, Kopper agreed to surrender $12 million that he had obtained illegally through several off-the-books partnerships that did business with Enron. In his plea agreement, Kopper alleged that his friend Fastow had taken kickbacks from partnership management fees and had helped create a scheme to cheat Enron out of millions of dollars.

The family's spokesman, Gordon Andrew, refused to comment on any aspect of the Fastow Foundation or the moving expenditure.

After weeks of negotiations between Fastow's attorneys and federal prosecutors, the former Enron CFO surrendered to federal authorities early Wednesday morning and was later released on a $5 million bond. His bond was secured by a $3 million investment account and several homes, including that of his parents.

His parents' home in the Southampton neighborhood is an integral part of the Enron/Fastow/Kopper/Foundation scandal. When Carl and Joan Fastow moved to Houston, they ended up in a plush 3,000-square-foot house on Bolsover Street in the Southampton neighborhood that the Fastows had purchased from -- who else? -- Michael Kopper and his domestic partner, William Dodson. The $850,000 loan that allowed Mr. and Mrs. Fastow to buy Kopper's home came from their son, Andy.

And therein lies the joy of the Enron scandal. Everyone was just so friendly.