Anthony Hopkins? Big deal! We've already seen the prequel to "The Silence of the Lambs" and "Hannibal" -- and it was better the first time. 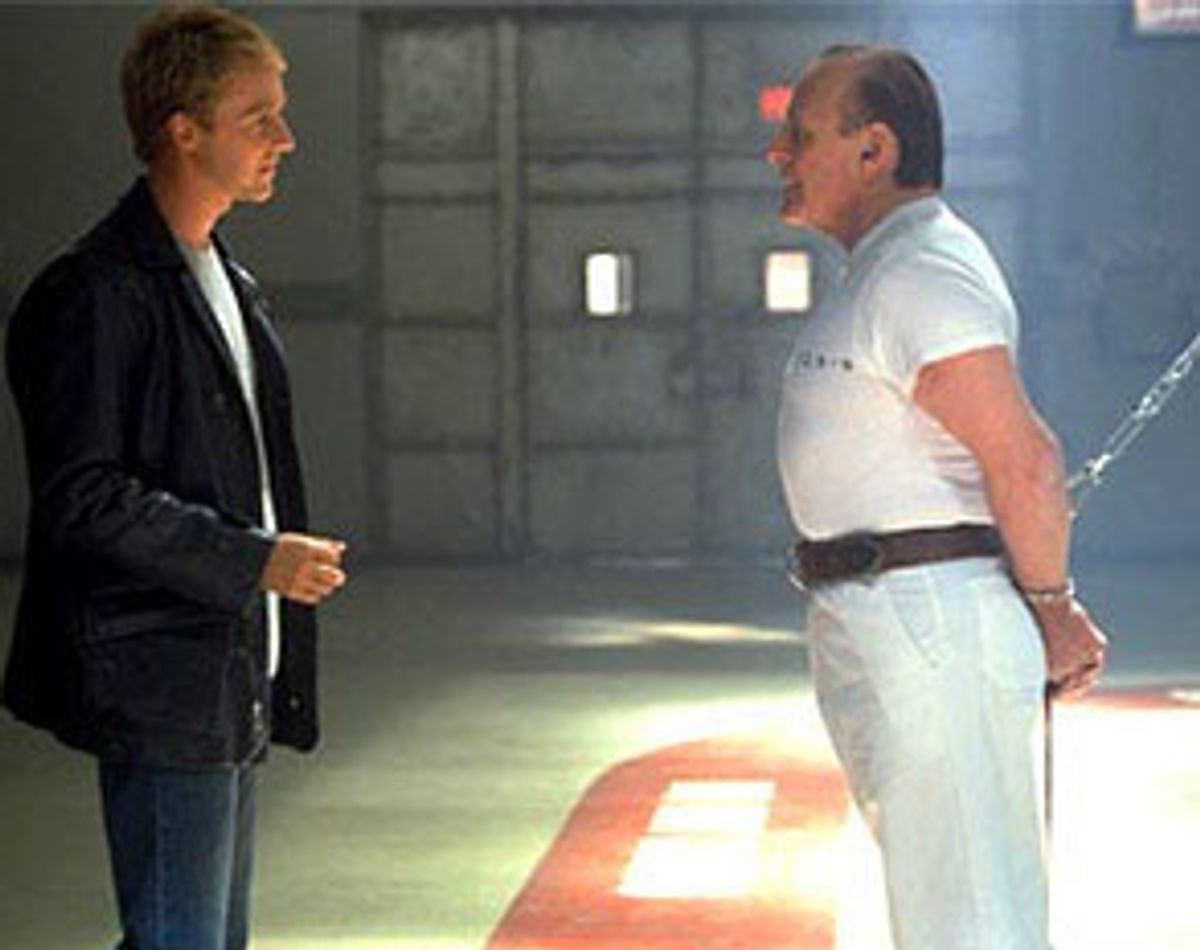 Very early in "Red Dragon," Brett Ratner's spit-polished and spanking-new adaptation of Thomas Harris' early '80s bestseller of the same name, forensic psychiatrist, patron of the arts and as yet unconvicted cannibal serial killer Hannibal Lecter (Anthony Hopkins) stages a little dinner party for his friends on the Baltimore Symphony Orchestra board. The guests don't yet know that the tenderloin glistening so delectably on their plates used to belong to one of their own musicians, who has mysteriously gone missing.

"These little soirees of yours are always the highlight of the year!" says one guest with a hammy twinkle as Lecter gazes with benevolent condescension at his highfalutin guests. The scene is a flashback to the '80s, and we note that Lecter is wearing what's left of his hair in one of those little ponytails that protrude from the back of the head like stubborn dried-out paintbrushes. Ah, the banality of evil! Even its hair doesn't always behave.

But then, especially as Hopkins has shaped him -- first in Jonathan Demme's "Silence of the Lambs" and later in Ridley Scott's "Hannibal" -- Hannibal Lecter isn't your garden-variety mullet-wearing serial killer. He's a man of taste and refinement, the kind of guy who probably has little gold fox heads on his slippers. How astonishing, then, that he could actually kill a man, much less eat one! You usually just don't see that sort of thing on the East Coast. This is complexity with a capital C, a kind of wit and intelligence that must be admired and, even though it's clear Hannibal's loco in the coconut, revered. To telegraph Lecter's coldness, Hopkins reaches into his pocketful of patented grade-A actors' techniques (a subtle twitching of the lips, a knowingly raised eyebrow). Yet it's a coldness that lurks in the heart of everyman: With a shiver, we watch his performances and say, "There but for the grace of God, and that excellent guidance counselor at Choate, go I."

If you buy the overprocessed headcheese of the serial killer as refined genius, you'll love "Red Dragon." Or maybe not. Even Hannibal Lecter devotees may lose patience with this picture's grandiose, self-serious ponderousness -- that's Lecterese for, "It's kind of boring in patches, actually."

"Red Dragon" -- a prequel of sorts to "The Silence of the Lambs," telling the story of yet another detective who's forced to call on Hannibal Lecter for advice -- isn't particularly graphic, though at times it's mightily unpleasant. There's not a lot of gore, but we don't make it out of the theater without seeing a healthy number of grisly forensic photographs, including some of corpses whose bloodied eyes have been replaced by shards of mirror. They're shock-value visuals, and yet somehow they're not the sort of thing that rob you of sleep. That's probably because the air around them is so stale. There's an aura of dread and menace about "Red Dragon," but it's almost as if it's been pumped into the movie by an ionizer. Neither Ratner nor his actors -- working from a script by Ted Tally, who also wrote the screenplay for "The Silence of the Lambs" -- are any good at charging the atmosphere with true creepiness.

But you can sure see them trying. Edward Norton is Will Graham, an astute, sensitive detective who has dropped out of the business to live quietly in Florida with his wife (Mary-Louise Parker) and child. It was capturing Hannibal, years earlier, that did him in: Apparently, he identified too closely with the mad genius, which landed him, temporarily, in the loony bin.

But now his old boss, Jack Crawford (Harvey Keitel) is after him to chase down one last serial killer: Someone has been breaking into families' homes, killing every member (including children) mercilessly, and lavishing special attention on the ladies of the house. Graham reluctantly enlists Lecter's aid in tracking down the murderer.

We know who the killer is long before Graham does, of course: It's Francis Dolarhyde (Ralph Fiennes), your friendly neighborhood mild-mannered impotent psychotic with a harelip, who has become obsessed with a William Blake painting to the point of desiring to become one with it. Thanks to Ratner's extra-subtle storytelling techniques, we know exactly how this living piece of trompe l'oeil became a killer in the first place. A hokey voiceover flashback tells us that Francis suffered severe emotional and physical abuse at the hands of the crazed granny who raised him. For those who have difficulty decoding such fine-grained psychoanalysis, Graham puts it this way: "He wasn't born a monster. He was made one through years and years of abuse."

It must have been exceptionally terrible abuse to turn poor Francis into a socially challenged zombie who intones lines like "I am the dragon and you call me insane!" So what's Fiennes' excuse? He paces through the movie like a silent-film ham, making his eyes look really shiny and crazy whenever it's called for, which is basically every time he's on-screen. Did someone forget to tell him "Red Dragon" is a talkie? This isn't a secret psychotic who walks silently among us, blending into the background like a ghost; this is the kind of guy no one wants to sit next to on the bus.

Nevertheless, it takes Graham the whole movie to catch him, and Norton plods along dutifully for the ride. Norton has been a terrific actor in pictures like 1996's "Primal Fear," his debut. But his performances over the past few years have had a rote, perfunctory quality, and "Red Dragon" is a prime example. He delivers his lines like a guy who sure knows how to deliver lines -- he hits them like a tennis pro idly whacking a ball against the wall over and over again. They make contact; they just don't whirr or sting.

At the very least, though, his brand of understatement is a blessed relief next to Hopkins' coming on like a bad Bette Davis impersonator. Hopkins has had a lucky run as Hannibal Lecter. So many moviegoers seem to be enchanted and mesmerized by him, but the appeal escapes me. "The Silence of the Lambs" has been hailed as a moody masterpiece, with Hopkins' performance as its steely center. But I find the picture to be so enamoured of its own low-lit gimcrackery that I can't bring myself to take it seriously. There, as in "Red Dragon," Hopkins takes such great care to festoon his character in crepey elegance that he succeeds only in turning it into low camp. He decorates his character's brilliant, evil thoughts with buttery line readings and oh-so-knowing smirks and winks -- it's funhouse acting of the worst kind, where everything we need to know is punctuated and underlined lest we miss it. These performances aren't scary, multilayered or psychologically intense: They're the preening and mincing of an aging starlet, and Hopkins has done (and can do) much better.

The only pleasure to be had in "Red Dragon" comes from some of its smaller performances: Philip Seymour Hoffman plays a sleazy tabloid journalist, delivering all his lines sideways -- they bounce off the movie's margins instead of thudding right toward its lumbering moose of a center, as nearly everyone else's do. And Emily Watson, as a blind woman who befriends Francis, is believable even in the midst of the grandly melodramatic moments she has to play.

But Ratner -- director of the "Rush Hour" movies -- is one of those filmmakers who have to spell everything out for us, and while it's admirable that he wants to tell the story clearly, there's also something kindergartenish and unsophisticated about it. (Be sure to listen for the way Danny Elfman's score swells like a flooding fjord during the electrifying blow-job scene.) "Red Dragon" -- shot by Dante Spinotti -- has an alert crispness to it. But the look is almost too clean for the mood Ratner's going for. The movie is handsome hokum.

And to put it bluntly, nothing in "Red Dragon" justifies the movie's existence, considering that a superb adaptation of Harris' hugely popular novel already exists. Michael Mann's 1986 "Manhunter" has a goofy title and an even goofier neo-new-wave synthesizer score. But for sheer, true creepiness, it hasn't dated at all. In that movie, Brian Cox plays the true Hannibal Lecter. He's a character, not a cartoon psychopath -- when he's allowed one phone call from his prison cell to call his lawyer, he instead manages to make another, illicit call by conning the operator in a dulcet croon: "I don't have the use of my arms. Would you be so kind as to dial the number for me?" His manipulativeness is almost soothing, proper, like a cordial note on nice stationery, even though his quick-minded deviousness is immediately obvious and unsettling. This is the kind of thing a psychopathic genius would come up with -- a bit of role-playing that puts in the service of pure evil the pity and sympathy that average people are all too willing to dole out.

Ratner doesn't re-create that moment in "Red Dragon," and you wonder why -- I know Hopkins couldn't have carried it off nearly as well as Cox did, but it would have at least been interesting to see him try.

Ratner also doesn't seem to realize that nothing Ralph Fiennes does here comes even close to the sheer terror -- not to mention the weird poignancy -- of Tom Noonan, who plays the same character in "Manhunter." At one point, Noonan appears with a ladies' stocking pulled halfway down his face, its leg sprouting from his head like a stretched-out nipple and extending into a long tail that he has tucked in neatly in the back.

The stocking is never explained, and yes, the sight of it is a little funny. But you can't laugh. There is such meticulousness in the way Noonan wears that stocking; it signifies something about that character that we can never really know -- and suggests that, cool as it may seem to "identify" with a serial killer, this one has definitely gone to places we just can't go.

Noonan is disturbing not because we identify with him, or because we've been programmed to feel some textbook pity as the result of learning some horrible secret about his background. He's disturbing because we're wrenched into feeling something for him even though we know so little about him. Somehow Noonan, Cox and Mann showed us the face of psychosis, not just its mask. Fiennes, Hopkins and Ratner, on the other hand, are hung up on its multiple disguises. In their world, deranged evil comes out of the dress-up box. They leave Pandora's box untouched, never even realizing it's theirs for the opening.