Back from his controversial trip to Iraq, Rep. Mike Thompson, D-Calif., talks about his concern over a unilateral strike against Saddam. 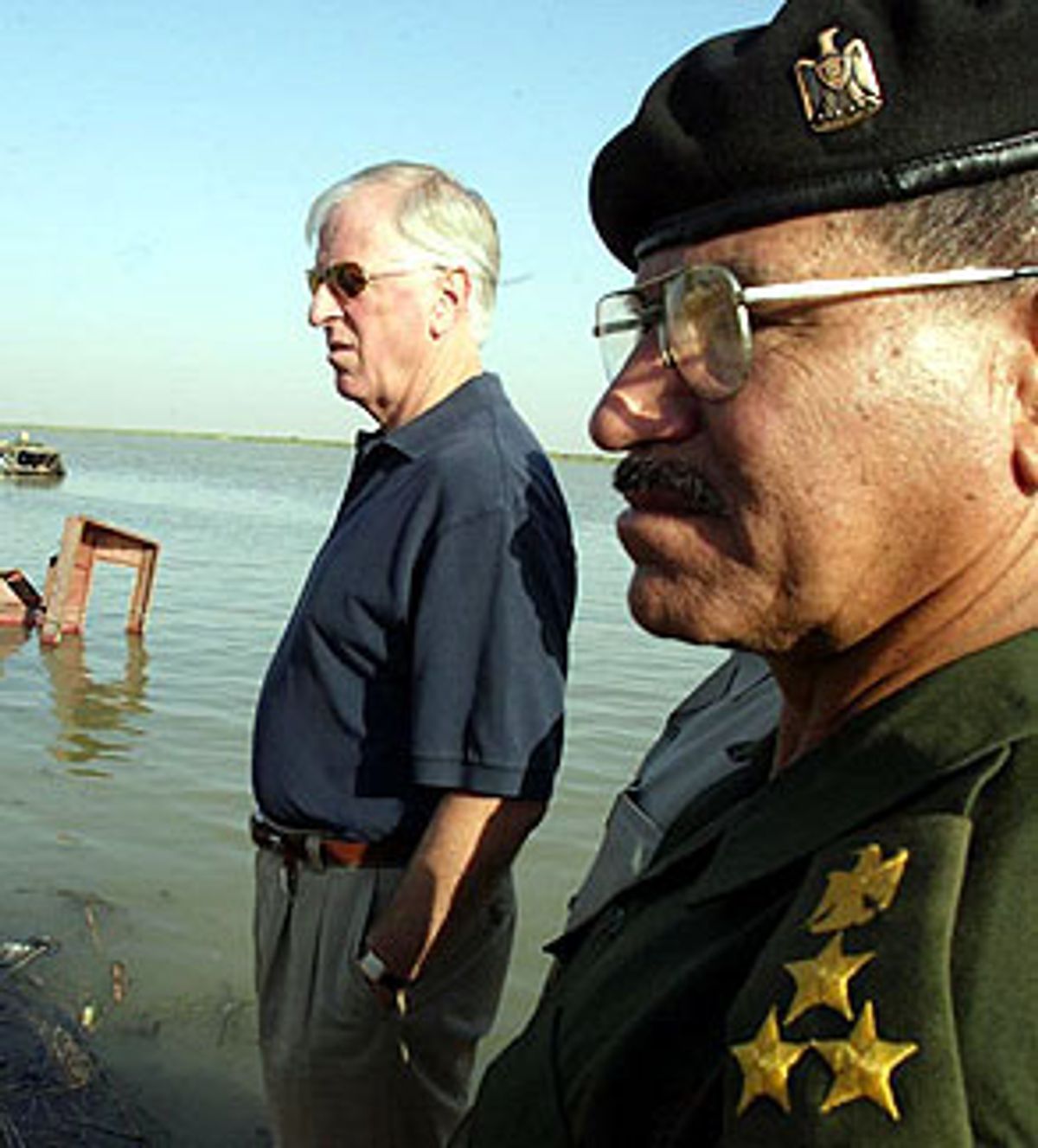 In some ways, the presence of Rep. Mike Thomspon, D-Calif., among the other congressmen who went to Baghdad last week made no sense. The two other members on the trip pretty much have their political careers mapped out for them. Rep. David Bonior, D-Mich., is retiring this year. And Rep. James McDermott, D-Wash., can be reelected from his liberal Seattle district for as long as he wants.

But Thompson is different. A relative newcomer to Congress (he was elected in 1998), the popular, moderate Thompson is, ideologically, far more conservative than either Bonior or McDermott. This became evident when Thompson struggled to distance himself from McDermott's comments in a CNN interview from Baghdad, when McDermott said he believed "the president would mislead the American public" about the threat Saddam Hussein posed to the United States. Upon their return, the three were scheduled to hold a joint news conference Wednesday, but Thompson opted out.

McDermott's comments engulfed the Baghdad trip in controversy, and led Senate Minority Leader Trent Lott, R-Miss., to say of McDermott, "He needs to come home and keep his mouth shut."

In an interview with Salon Thursday, Thompson, a Vietnam veteran who received a Purple Heart, seemed embarrassed by McDermott's comments, but unapologetic for his decision to go to Iraq.

What were your reasons for wanting to go to Iraq now?

I tagged on to this trip that two of my colleagues had lined up. And when I heard about it, I asked if I could join them, and they agreed to let me go. I wanted to go for a couple of reasons. One: I wanted to see the area up close and personal. It's probably the most significant vote we're going to cast, at least in the four years I've been in Congress. Bigger than that, this is a very radical shift in 200 years of constitutional democracy, of international law, of foreign policy doctrine. And more important than that, if we end up deploying combat troops over there, American soldiers are going to get killed. And I think that's pretty serious. I also felt if there was anything at all that I could say that would help to prevent or avert a war, I wanted to do that. My message to the government of Iraq was, the ball's in Saddam Hussein's court, and if he wants to prevent war, he's going to have to allow the inspectors in with unrestricted, unfettered access. Nothing short of that is going to keep the troops out.

What kinds of things did you do while you were there?

I met with a lot of government officials and delivered that message. I went around Baghdad, and got a sense of that community, and exactly how difficult it's going to be to fight an urban war in that city, in that environment. I was able to talk to a lot of people. I wanted to assess the human infrastructure. If we go in there, we're going to be there for a long time. I don't know how you go in and do it without figuring out who replaces him, is he in fact better than this animal. So, I think it's important to know how the people are going to receive us.

What was your sense of the Iraqi people in your conversations with them?

It strengthened my belief that Saddam Hussein's an evil guy, no question about that.

Do the Iraqi people believe that as well?

I just think it's so beyond their ability to even think about that. First of all, they depend upon him for everything, right down to the food that they eat every day, they get government rations. They're so suffocated by his regime. There's no information coming from outside the country. CNN has an interesting situation there. They have a one-way broadcast. It goes out, but it doesn't come in. I was doing one interview with CNN, and I was being very critical of Saddam Hussein, and about the time I hit the peak of my criticism, lo and behold, the line went dead. Somebody said, "Saddam just pulled the plug." I thought they were kidding, but in retrospect I don't think they were.

People were very, very reluctant to talk. They're scared. A CNN reporter took me down to an area of town where she thought people might be willing to talk to me. I got one guy in a store who was kind of getting comfortable talking to me, and the police came in. And I don't think it was coincidental. They really, really suppress those guys.

I met a woman who worked in the gift shop of the hotel where we were staying. She said she was 25 years old, this will be her third war. The only hope is the bomb doesn't hit her house, and if it doesn't she'll get up in the morning and go to work. It was quite depressing to hear how so many people had resigned themselves to that, because their living conditions are already so terrible. Health care is poor, education system's poor, sanitation's poor. It's a perfect petri dish for breeding terrorists. That's the whole deal in that part of the world. If we don't figure out how to break that cycle, and give people some hope, we're always going to be fighting terrorism.

I think it's appalling that a dictator who is the head of a country that's so rich in natural resources is doing what he's doing -- to prevent that resource from being used to help his people.

Did you get any sense of how Americans, or the U.S. government, are perceived by the people of Iraq?

There didn't seem to be animosity. There was a great interest among the people we met while we were there. Nobody said anything negative about me, or the government. We heard a lot of talk about hoping to prevent this war. There was a sense that maybe there was some way around this. In the airport in Jordan, on the way back, I had two or three people come up to me and say, "Hey, I really want to thank you." I said "For what?" and they said, "We know why you're here. We know you're trying to get the message to Hussein to let in the inspectors, that you want to prevent war." It would be incredibly destabilizing for the entire region, it would hurt Jordan, and plus, it elevates the possibility of nuclear war, and people are very worried about that.

Did anything that you saw or heard surprise you while you were there?

What did you make of the American reaction to your trip?

I think a lot of it was drummed up. I think there was a real effort to get the radio talk shows to be revving it up. And there are some people who probably have some serious concerns as to why members of Congress would be over there. There were a couple of things done over there that probably didn't help what I wanted to accomplish.

You're referring to Rep. McDermott's comments?

[Long pause.] Let's just leave it at that.

How have your colleagues in Congress responded to you since your return?

I have talked to colleagues more in the last couple of days, trying to respond to their questions over this, some people that I haven't said five words to in four years. That was interesting to me. [California Republican congressman] Richard Pombo and I were on the radio together. He was asked what he thought about my trip. He said, "Hey, I know Mike. I know why he was there. He was there for the right reasons, not the wrong reasons, and it's good he's there." I've got a congressional duty, and to discharge those duties, I've got to have the information that hasn't been brought forward to date.

How much of your desire to go was shaped by your own experiences in Vietnam?

I think a lot. This is a real critical vote. I served in a war that saw 58,000 American boys die in Vietnam. If we go into Baghdad, a whole bunch more are going to die. It seems to me that if any of us can do anything to avert that, it's our responsibility -- it's our duty -- to do that. In the end, it may not work. But I'd have felt I was less than doing my job had I not at least tried.

Will you support the resolution that the White House and Richard Gephardt are supporting?

I suspect that the resolution's going to pass. But I don't think I can vote for the resolution that's before us. I think the more conservative vote is a "No" vote. I just think it's a real radical departure -- from international law, our constitutional democracy. I think to do a preemptive strike without multilateral support is a big, big mistake. No. 1, I think any kind of strike needs to be the last possible option. And No. 2, we really need to do it with multilateral support, and I don't think that's there. I just don't see any immediate danger to the citizens of this country and the people I represent. I've been to all the briefings, I've heard from everybody. I just don't know a lot of guys who are thinking this is the best way to go.