The governor's lesbian joke about the women arrested in the Rilya Wilson case is the latest example of his mean sense of humor -- when he thinks the media isn't listening. 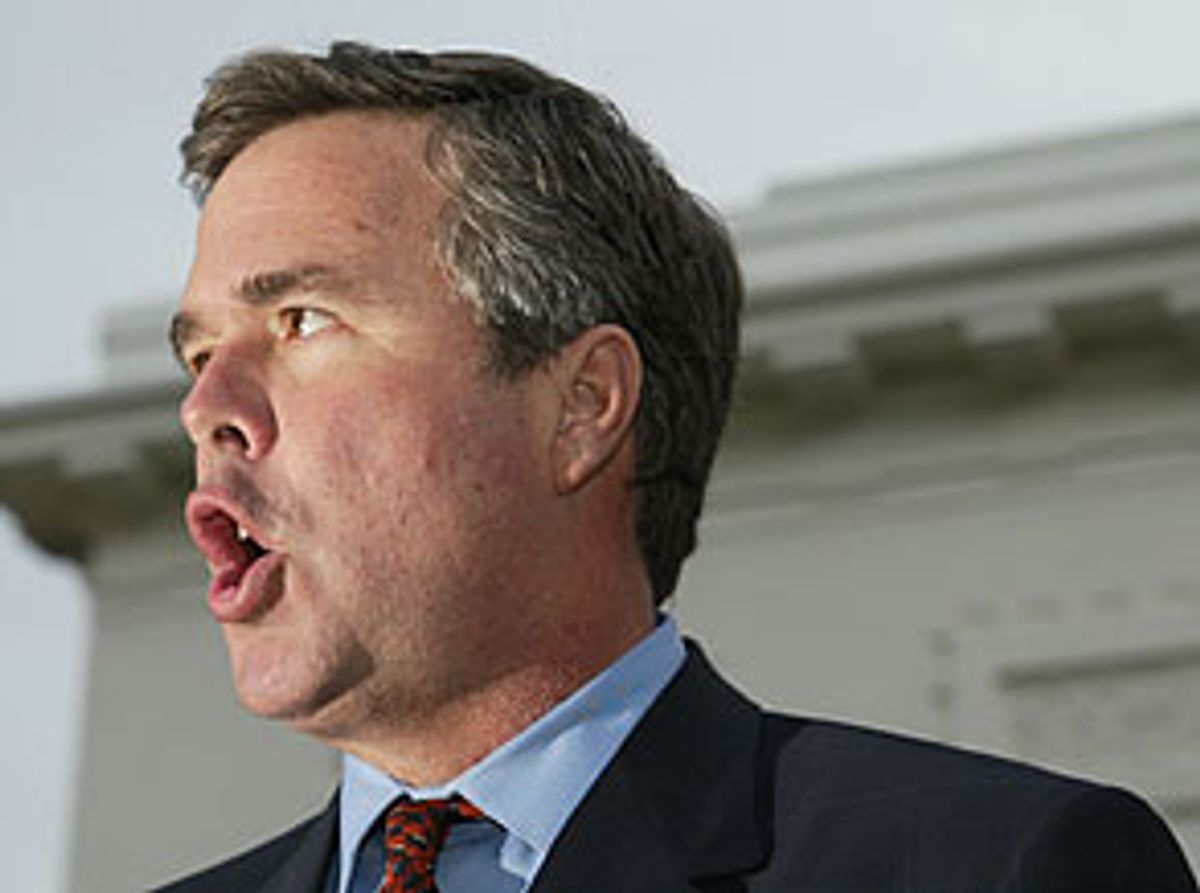 Florida Gov. Jeb Bush, running for reelection in November, has a habit of getting himself in trouble when making statements in front of reporters -- particularly ones he doesn't know are there.

Bush's latest gaffe comes on the heels of the first arrests in the tragic Rilya Wilson case. The child, who turned 6 last month, has been missing from state custody for more than a year, having last been seen at the home of her guardian Geralyn Graham. Graham, who has a long rap sheet for fraud and more than 40 aliases, says a worker from the state's Department of Children and Families picked up the little girl from her home and never returned with her. She and her sister Pamela Graham claimed to be the child's maternal grandmother and grand-aunt, respectively, but turned out to be acquaintances of Rilya's mother. They're now under arrest, along with two of Geralyn Graham's grown children, for allegedly obtaining more than $14,000 worth of state assistance for the girl after she went missing.

News of their arrest prompted Bush to tantalize GOP lawmakers at a Wednesday meeting with what he called "juicy details" about the women -- who he implied were not sisters at all, but rather a lesbian couple.

"As [Geralyn Graham] was being arrested," Bush told the Panhandle lawmakers, "she told her co-workers, 'Tell my wife I've been arrested.' The wife is the grandmother, and the aunt is the husband." Bush added gestures, using his fingers to make quotation marks as he emphasized the word "grandmother."

"Bet you don't get that in Pensacola," Bush added for flourish, apparently not realizing that a reporter with Gannett Regional Newspapers of Florida was in the room. His comments were first reported in Wednesday's editions of the Pensacola News-Journal, and soon made the rounds of media across the state.

"He's making jokes when there is still a missing baby here, or doesn't he care?" Fisher said.

Bush's people called his latest gaffe a "nonevent," but it quickly drew the fire of the state's largest gay-and-lesbian advocacy group, Equity Florida, whose executive director, Nadine Smith, called Bush's remarks "childish" and "locker room homophobia." And a spokesman for Democratic gubernatorial nominee Bill McBride remarked that "Floridians would be concerned that Jeb Bush has a different message behind closed doors than what he does in public."

Bush's history of politically unfortunate rhetoric goes back to 1994, when he famously answered a question on the campaign trail by saying he would do "probably nothing" for blacks if elected governor. He lost the race against incumbent Gov. Lawton Chiles by a hair -- and many analysts believe his dismal showing among black voters (he got just 4 percent) was largely to blame.

Since then, Bush has had two other public stumbles, including his response to an impromptu sit-in by two African-American state legislators, state Sen. Kendrick Meek and Rep. Tony Hill, who in 2000 were protesting the implementation of Bush's One Florida plan repealing affirmative action in state contracting and higher education. Irritated by the legislators' refusal to leave his offices following a failed attempt at renegotiating the plan, Bush admonished staff -- within earshot of a television reporter -- to "throw their asses out." Bush's staff later tried to "convince" the reporter not to air the remarks, but they were splashed across the airwaves anyway, forcing the governor to backpedal into a cover story that he was actually referring to the media's asses, not the lawmakers'.

While the latest gaffe certainly isn't a bigger story than, say, the scandalous inability of the state to hold a clean, well-run election, the story does call into question the judgment of the man who wants a second term as governor in a state with sizable minority and gay-and-lesbian populations. Bush's record on social issues isn't exactly stellar: His nominee to head the state's troubled child welfare agency signed onto a treatise calling for more corporal punishment of children and the consignment of women to the home. And the glaring disconnect between his words and the warm and fuzzy image he portrays in public is simply impossible to ignore.

Bush likes to project the image of compassionate conservative in public. His reelection campaign commercials portray him as just "Jeb" -- canoodling with schoolteachers and handing out $160-a-month prescription-drug subsidies to the elderly poor.

But the man who wept in public and pleaded for privacy in the case of his drug-troubled daughter (she was recently caught with crack cocaine at a rehabilitation center) just can't seem to stop making inappropriate, off-color remarks in private. For a man who has made "accountability" a cornerstone of his governorship, Bush's inability to restrain his tongue -- and his refusal to brook criticism for it -- just seems troubling.

And as if he hadn't had enough bad publicity for one day, Bush is now said to have told lawmakers at that same meeting that he has a "devious plan" to kill a proposed bill to mandate reduced class sizes in the state. If voters approve the bill in November, Bush says, it will bust the state budget, and he has made opposing it a platform in his reelection campaign. So what was his "devious plan"? Bush was overheard on the reporter's audiotape saying that if the class size amendment passes, he might offer a second voter initiative with funding -- read tax increases -- attached, so voters will see the full ramifications of their choice. But once again Bush's unfortunate choice of words -- rather than the debate about class size mandates -- became the story.

In his defense, Bush comes from a family that's famous for its curious relationship with the English language. (Remember "Is our children learning?" the nugget from George W. Bush's campaign for president?) But while his brother and father are more famous for a certain unfamiliarity with the rigors of the mother tongue, Jeb's verbal slips tend to reveal a mean-spiritedness that seems less benign.