"The Man From Elysian Fields"

Mick Jagger and James Coburn bring a rumpled, decadent vision of elegance to this entertaining fable about a writer working for an escort service. 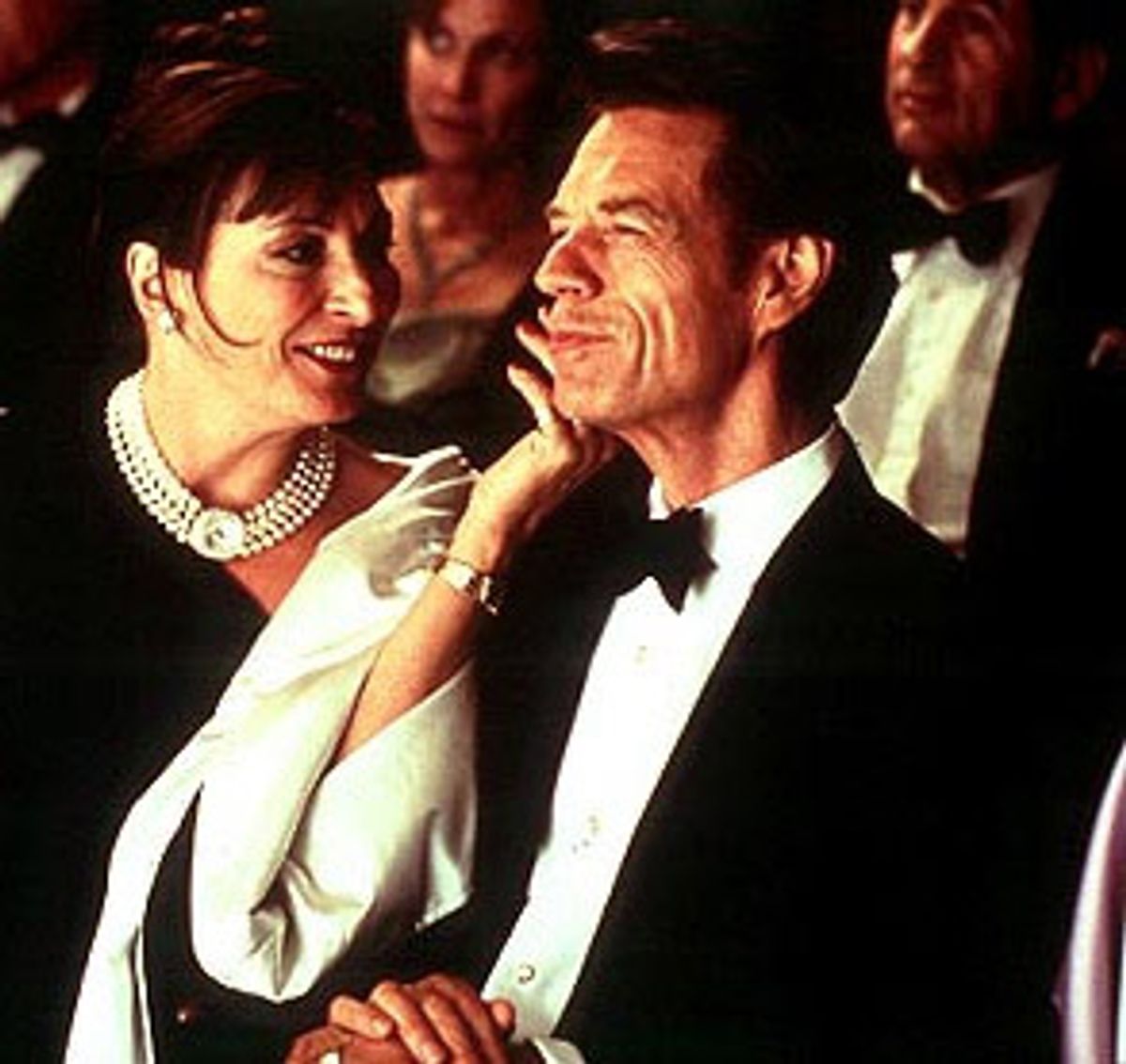 "The Man From Elysian Fields" is one of those nicely made, well-acted, entertaining pictures that would be sensational if only it didn't suffer from a failure of nerve. Written by Phillip Jayson Lasker and directed by George Hickenlooper, it's the story of Byron Tiller (Andy Garcia, suitably brooding and believable), a novelist who can't quite get things together. Critics praised his first book -- he and his wife, Dena (Julianna Margulies), have memorized the best lines from the reviews and rattle them off in bed like jazz musicians trading eights -- but it's now languishing on the remainder table. Running out of ideas on how to support his wife and young son, Byron reluctantly takes a gig with the mysterious Luther Fox (Mick Jagger), who runs the Elysian Fields escort agency. He's immediately assigned to squire the lovely and very rich Andrea Allcot (Olivia Williams) around town; she's married, but her husband is aged and ailing, and she prefers to have a date for her nights at the opera.

That husband, as it turns out, is multiple-Pulitzer Prize-winning author Tobias Allcot (James Coburn), whom Byron greatly admires. For better or worse (and at the very least, the money is good), Byron becomes enmeshed in the life the Allcots have together, which, naturally, means that his own family goes neglected, with the predictable repercussions.

"The Man From Elysian Fields" does so many things right: Without resorting to clichés, it captures the deep insecurity of writers, as well as their persistent fears that their best work is behind them. The dialogue is often witty and written with a light touch, and to a person, the actors seem to revel in it -- it's one of those ensemble casts in which everyone is in tune and clicking perfectly. Williams, who has been terrific in pictures like "Rushmore" and the little-seen English romantic comedy "Born Romantic," plays a character with steelier edges than we've ever seen from her before. Coburn finds a hundred different shades in the simple adjective "cantankerous" and paints them all for us, showing how simple crankiness is often just a flimsy cover for all kinds of insecurity as well as for basic human decency -- though it's also, of course, a marvelous outlet for genuine eccentricity.

Even though "The Man From Elysian Fields" is your classic tale of a Faustian bargain, it still manages to feel marvelously offbeat and fresh for at least its first two-thirds. But it's as if Hickenlooper and Lasker painted themselves into a corner and weren't sure of the best way to hop out of it. The problem isn't that the movie's resolution is predictable (how does anyone think a Faustian-bargain movie is going to end?); it's that it's flat and humorless and aggressively heavy, without having any actual weight, when what it really needs to be is delicately dry and dark and a little funny. "The Man From Elysian Fields" starts out like a movie that's going to refuse to bow to convention, only to inexplicably crumple onto its knees in front of it.

But if you're looking for the picture of decrepit elegance, "The Man From Elysian Fields" has it in Mick Jagger. Jagger looks wonderful -- which is not to say he looks young for his age. His face has been steadily taking on the creases and contours of a rock-star apple doll, but in "Elysian Fields" it's a look he wears beautifully, perhaps because his sharply tailored suits bring out his innate elegance. (Those suits are a throwback to the classically cut but superbly modern-looking jackets he used to wear so well in the early to mid-1960s, before he became better known for absurd jumpsuits and ridiculous velvets.)

Jagger's performance rings true. He may not have an excessive range, but there's something very touching about the way he captures his character's reluctance to give in to old age and uselessness. In his best scene, he's chatting casually and comfortably with a gorgeous girlfriend (or is she a client?) played by Anjelica Huston. Their banter is light and natural, and he looks and acts almost mystically boyish, until she says something that cuts him to the quick; then his self-doubt and self-loathing transform him back to his actual age.

Jagger's performance is more than a curiosity; it's a revelation, particularly coming from a man who has for years worked so hard to maintain an aura of youthfulness. Here, Jagger both looks his age and reminds us that the beautiful boy he used to be is still there inside. As an actor, if not as a rock star, Jagger seems to know that hanging too desperately onto youth is the quickest way to lose it. Forgetting your age completely is the only way to stay young.