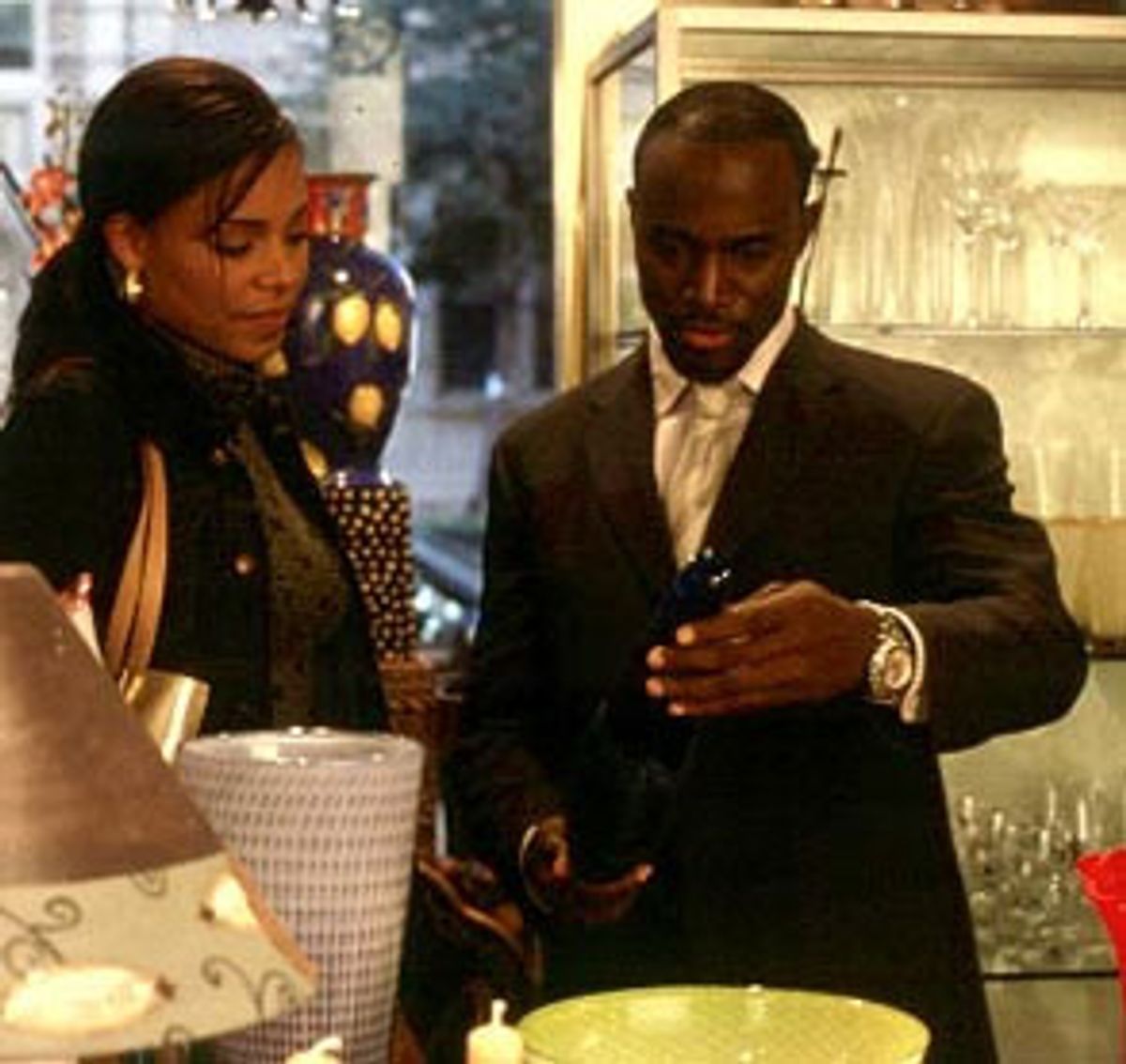 The way the music we love as teenagers grows -- and doesn't grow -- with us is a potentially great subject for a movie. So it's frustrating that the subject only occasionally peeks out from the agreeable romantic drama "Brown Sugar."

In the movie's opening section some of the seminal hip-hop figures -- Slick Rick, Doug E. Fresh, Dana Dane, Big Daddy Kane and the members of De La Soul -- answer the question "When did you first fall in love with hip-hop?" The director, Rick Famuyiwa ("The Wood"), intercuts those interviews with scenes set in the early '80s of people gathering on Brooklyn playgrounds to watch break dancers and DJs and rappers perform. So before the movie has even started you're given a taste of the excitement and joy of being in a place where you're hearing something that sounds so completely right you can barely conceive of a time when it didn't exist.

But the excitement and sense of possibility opened to the people who heard hip-hop and embraced it is quickly subsumed in the story of Sidney (Sanaa Lathan) and Dre (Taye Diggs), who become best friends as children during the early days of rap. Twenty years later Sidney has left a job as a music critic at the Los Angeles Times to return to New York as the editor of the hip-hop magazine XXL. Dre has gotten a job as an A&R man at a mainstream hip-hop label. Their careers have meant to show us that their lives have taken a course dictated by their love of the music. The songs they loved and the shows they saw are the touchstones of their lives, and the names of those records and artists are their shorthand for memories of shared times, moods, emotions.

In Sidney's voice-overs -- excerpts from a book she is writing about her own love affair with music -- we quickly realize that she is also writing to Dre, pouring out the love she's never been able to express. In addition to the music laid end-to-end on the excellent soundtrack, a mix of classic hip-hop tracks from the likes of Eric B. and Rakim and new cuts, Mos Def and Queen Latifah show up in supporting roles.

Famuyiwa and his co-writer, Michael Elliot, have clearly conceived the movie, like the book Sidney is writing, as a love letter to hip-hop. So why does the music end up feeling so incidental? Why doesn't it seem any more important than any other buppie career path?

It's not because the focus of the movie is on the burgeoning love story between Sidney and Dre, how they come to admit they've always been in love with each other. That shouldn't be a problem in a story about two people who have always communicated through music. And it's not as if the movie doesn't address the way loving any art form ultimately breaks your heart. Dre quits his cushy job when he gets sick of the pap his record company is putting out, and Sidney gets caught in the tangles of balancing journalistic objectivity and her desire to be an advocate for the music.

The problem with "Brown Sugar" is subtler than that. It has to do with the movie's lack of texture, of specific detail. Sidney and Dre do an awful lot of talking about what this or that song meant to them. And though they occasionally touch on why hip-hop no longer sounds quite as vital to them as it did, the movie, perhaps afraid of alienating contemporary fans, quickly gets away from that topic.

What's missing from "Brown Sugar" is the very thing that "24 Hour Party People," Michael Winterbottom's recent film about the '80s rock scene in Manchester, England, has in abundance. In scene after scene in that movie the characters hear a song performed -- or perform a song themselves -- and watching them you realize that the ground has opened up beneath their feet, that their life is irrevocably changed from that moment on and that their fate will always be tied to this music.

Watching "Brown Sugar," on the other hand, I got the feeling that Sidney could go into publishing and Dre into some corporate position without changing the fabric of their lives all that much. They may love hip-hop, but the movie doesn't show us two people who have admitted it into the marrow of their lives to the point that they'd be devastated without it. That sense is what a movie about how music can utterly change someone has to contain.

And yet if "Brown Sugar" fails as a film about how art can transform -- or destroy -- your life, there is something in its smooth, pleasant conventionality that needs to be recognized. I don't want to call it anything as definite as a trend but there is something present in recent black American movies, something modest and ordinary and on some basic level satisfying, that white commercial movies have lost. We've all seen the stories the new black pictures are telling before. Essentially, they're happy-ending movies where true love triumphs and the small guys stand up to the bad guys. And it's that familiarity that keeps them from being truly exciting.

What you won't find in "Brown Sugar" or the much better "Barbershop" or last year's "Love and Basketball" is the self-consciousness crippling most Hollywood movies. Black movies don't command the elephantine budgets of white commercial movies and while racism certainly plays a part in that, the modest budgets are turning out to be to the advantage of the filmmakers. Because they don't have to worry about recouping inflated budgets, they're free to relax without fretting about making every moment a whopper. And so the new black movies feel as if they have been made for the purpose of actually entertaining an audience instead of just hyping them to death while picking their pockets.

When groups of people who have been underrepresented in movies finally get to make their own, it's perhaps inevitable that many of them will turn to familiar conventions and formulas. But the presence of people who have traditionally been marginalized creates a new context that can blow away the staleness we might feel if we were watching these stories with white actors. Let me put it this way: Nobody really feels like they're missing anything if they don't see "Sweet Home Alabama" or the latest piece of pap from Nora Ephron. But there haven't been so many black romantic comedies that black audiences -- or the people making these movies -- are taking them for granted.

The failings of "Brown Sugar" don't feel like they happened because the people making it were too jaded to give a damn. The level of Hollywood commercial moviemaking is so bad right now that it often feels as if we aren't even being given that crumb of respect by the filmmakers and studio chiefs. The new black movies make those of us sitting in the theater watching feel as if we actually count for something.

That good feeling can carry you through this movie's silly and dull patches. "Brown Sugar" avoids one of the mistakes romantic movies are making right now by refusing to portray the lovers Sidney and Dre leave behind as evil or stupid (though it comes dangerously close with Nicole Ari Parker's character). The movie's funniest moments belong to Wendell Pierce and Erik Weiner as an idiot duo of salt-and-pepper hip-hoppers who make the charts with their version of the old Paul McCartney-Michael Jackson stinker "The Girl Is Mine" (their version is called "The Ho Is Mine").

They're given a run for their money by Mos Def. As an aspiring MC signed by Dre, Def has the laid-back delivery of a big stoned alley cat. He doesn't push a thing yet his timing is sometimes close to flabbergasting. Whoppers just roll off his tongue. He has a riff on what really happens at the end of "Casablanca" that may have Jesse Jackson rushing to defend the manhood of Claude Rains, though anyone with a sense of humor will probably laugh. The mistake the movie makes with Mos Def is not giving him more scenes with Queen Latifah as Sidney's girlfriend, and the woman he has a crush on; their few moments together are wonderful.

Taye Diggs never overdoes Dre's intensity or integrity; he's an understated leading man who is all the more likable because of it. But it's Sanaa Lathan as Sidney who won my heart here. There's a freshness, an unspoiled quality, to Lathan that seems to connect effortlessly with the audience, the way it did in "Love and Basketball," though she's grown as an actress since then. The voice-overs the movie gives Lathan allow her to use her delicious buttery voice, and the slow drip of her words does more than anything else here to convey the torch these characters carry for hip-hop.

The best moment in "Brown Sugar" is one that's either a bittersweet stroke of inspiration or an example of the filmmaker's inattention to detail. Lathan narrates the closing lines of Sidney's book, lines that talk about how despite what people said, she never thought of hip-hop as a fad; it has been a constant in her life and has grown with her. But as we hear those lines we also hear, on the soundtrack, the jazz singer Cassandra Wilson's wonderful version of Cyndi Lauper's ballad "Time After Time."

Lathan's words suddenly sound less like a tribute to a still strong friend than they do a tender kiss goodbye, an acknowledgment that some times in our life are beyond recapturing, that not all the music and things we once loved grow with us, and that sometimes we have to look for what speaks to us in other places, even in "grown-up" music, the sort that, when we were kids, we could never have imagined liking.