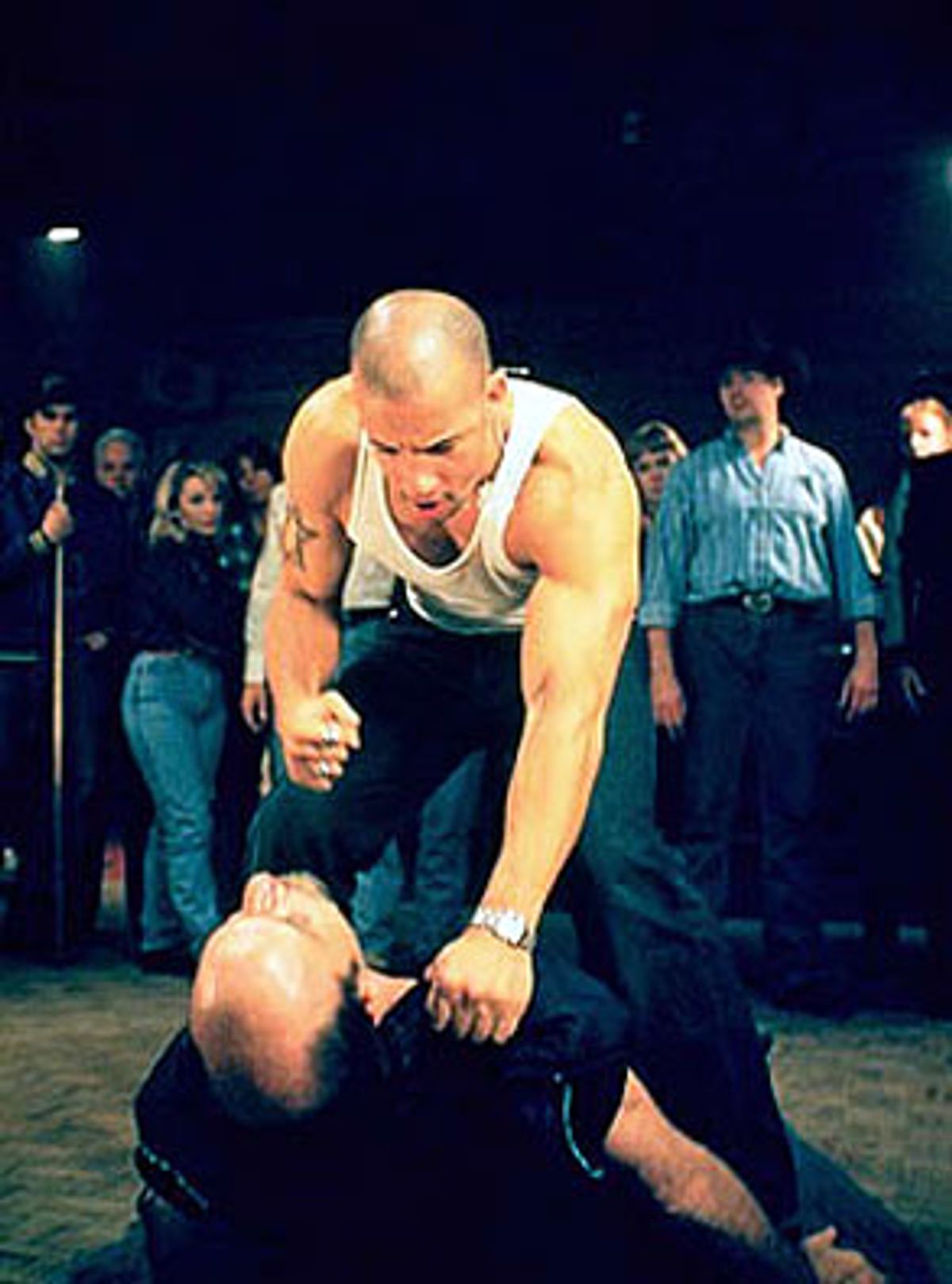 "Knockaround Guys" is one of those strained caper movies that's hardly any fun to watch and begins to vaporize from your memory minutes after it ends. The picture was written and directed by Brian Koppelman and David Levien, who wrote the feeble 1998 "Rounders," which took place in the underworld of professional poker players.

"Knockaround Guys," the pair's first picture as directors, is set in another underworld subculture: It's the story of four young men -- played by Barry Pepper, Vin Diesel, Andrew Davoli and Seth Green -- who have enjoyed privileged lives as the offspring of Brooklyn mobsters, but who have come to realize that they can't get any respect in either their fathers' world or the real one.

Pepper's character has been nothing but a flunky since he failed a significant business-related mission at the age of 13. He begs his father (Dennis Hopper, who chomps idly through his small role in the movie as if it were a pastrami sandwich) for a significant gig in the family business. Eventually, because Hopper has fallen on hard times, he agrees to let Green, an amateur pilot, fly across the country to pick up a half-million-dollar loan and transport it back to New York; Pepper will supervise the deal.

Naturally enough, things go terribly wrong, and they just happen to go wrong in the little cow town of Wibaux, Mont. That's the setup that brings these four city boys into a fresh, foreign environment, supposedly providing them with unexpected challenges, new chances to prove themselves and jukeboxes with tunes they've never heard before. In a gun store, they're waited on by a guy wearing an "Elk-a-holic" truckers' cap; they have to ask a local who Brooks and Dunn are. They're city boys in a cowboy burg, and the movie presses the point every chance it gets.

Worse yet, the characters are locked in a movie that never knows what tone it wants to strike. Koppelman and Levien take great pains to make the picture funny at times, and you can feel every grunt and groan of their creative process. But they also try to suffuse it with darkness, and they aren't skillful enough to navigate those kinds of tone shifts. When one character dies, brutally, he's lucky to get a few bars of Bob Dylan's "Not Dark Yet" on the soundtrack. Before you know it, the movie is off and running in another direction before we've even had a few minutes to allow the incident to settle.

There are lots of cat-and-mouse shenanigans with a local sheriff (Tom Noonan) who's after the money, and a few mildly funny scenes with a couple of stoners who momentarily get ahold of the dough (they blow it on 7-Eleven snacks and motorized luges). Most significantly, though, "Knockaround Guys" asks us to suffer through yet another John Malkovich performance in which he enunciates every word as if it were its own country. (Listen for the particularly memorable line "I got shoes older than you, kid, and tougher, too.")

When Pepper, Davoli, Diesel and Green appear in scenes together, Koppelman and Levien don't know how to orchestrate the dialogue: You could drive a van full of stolen VCRs through the dead air between their lines. All of the young actors strut valiantly here, but they all miss the mark. Diesel is particularly disappointing: He can be a charming and appealing actor, but he needs to have his sense of humor and his lightness of touch engaged. Otherwise, he's just so much Beef-a-Roni. And that's the last thing this already limp and spongy movie needs.