There's something genuinely creepy about this neo-vampire movie for teenage girls -- but not in a good way. 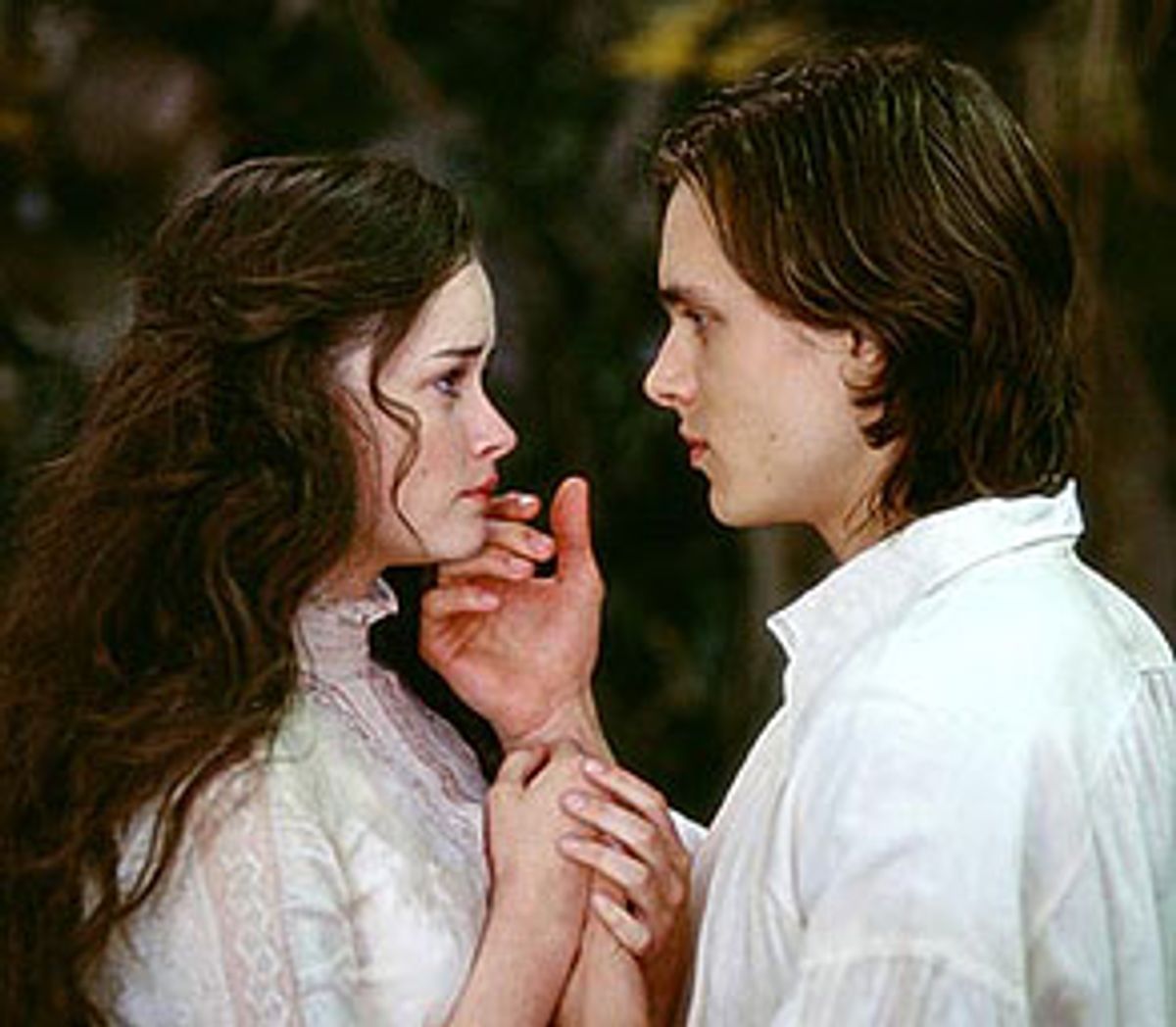 "Tuck Everlasting" is a neo-vampire movie for tender-hearted preadolescent girls who are afraid of sex. If that's your thing, go for it. But there's something genuinely creepy, and not in the good way, about this story of a family whose members, having drunk from a magic forest spring, stay exactly the same for hundreds of years. They're forever doomed to keep to themselves and watch wistfully as the world swirls by around them in its eternal spin-cycle of renewal.

After a pert 15-year-old rich-girl outsider named Winnie (Alexis Bledel) accidentally stumbles onto the Tucks' secret babbling brook, daddy Angus Tuck (William Hurt) explains ruefully, "What we Tucks are, you can't call it livin'." You can't call it actin' either, but that's not even the major problem with "Tuck Everlasting." Adapted by director Jay Russell ("My Dog Skip") from Natalie Babbitt's popular 1975 young-adult novel of the same name, the picture has trouble finding the right tone: It wobbles ineptly between enchantment, spookiness and gassy profundity. "Don't be afraid of death -- be afraid of the unlived life" is the movie's message, delivered (more than once) at the expense of a coherent story with any real sense of drama.

But then, lessons are really all that matter in movies like this one. "Tuck Everlasting" is set in 1914; the Tucks have been kicking around since early in the century before -- they're lost people in some very old clothes. Mae (Sissy Spacek, who manages to hold onto some shred of dignity in a dismal role) and Angus head up this forlorn clan. Miles (a glowering Scott Bairstow), the embittered older son, used to be married, but when his wife found out the family secret, she took the couple's two kids and hit the road. (In a wordless flashback sequence, we see her flashing her eyes angrily at this family of weirdos, and we don't for a minute blame her.) The youngest Tuck, Jesse (Jonathan Jackson), is 17 going on 104 and has never been laid, so you can imagine what goes on in his head when he lays eyes on the luscious Winnie.

That's suggested, of course, but "Tuck Everlasting," by virtue of being a squeaky-clean tale for young adults, can't get anywhere near an even remotely believable truth about the nature of young love and lust. Protective parents will be pleased to note that there's very little sexual innuendo in "Tuck Everlasting," save a chaste scene in which Jesse and Winnie cavort, semiclothed, under a waterfall. And good old-fashioned pioneer values are upheld throughout: We get to see Mae kill a bad guy by clocking him on the head with a shotgun. "Tuck Everlasting" is a movie with its priorities in the right place.

The picture sets up a false sense of drama wherever it can, particularly in its use of the mysterious Man in the Yellow Suit (Ben Kingsley), who enters the story, twirling his mustache, to stir up trouble. He does manage to stir up a bit, but his role is just an inconsequential curio, a device to get the story cranking. It does so only feebly, making us feel cheated in the end.

And the story's moral scheme is all too convenient: The Tucks have managed to sell their souls to the devil without actually doing anything wrong -- they're innocent victims, beyond reproach. They have none of the decrepit glamour of Dorian Gray. Their story is obviously a highly cleaned-up version of old vampire legends, one with no bloody mess and no blatant sexual desire.

But that means there's also no drama or passion, other than the ultrasanitized kind. The movie purports to tangle with the idea of everlasting love, but you don't feel any of it in your soul. It's not that "Tuck Everlasting" has to be racy in order for us to connect with it emotionally. But when old-young Jesse, forced to leave his beloved Winnie, calls out, "I'll love you till the day I die," the line has no resonance or weight; it's just so much mystical fairy-tale baloney. (For a kids' movie that captures intuitively all the passion and intensity of life that "Tuck Everlasting" prattles on about, have a look at Alfonso Cuarón's dazzling adaptation of Frances Hodgson Burnett's "A Little Princess.")

Obviously, "Tuck Everlasting" couldn't be a real vampire movie. But there's no reason it couldn't have been infused with real feeling, instead of just a nice, tidy lesson about the continuity of life and the painfulness of growing up. When Mae says to Winnie, regretfully, as the Tucks are packing up to leave for parts unknown, "I wish you were ours -- for Jesse, for all of us," there's a slight ominousness to the line, as if Winnie were little more than a cocker spaniel for the family's amusement. "Tuck Everlasting" gives us plenty of creepiness but no real romance. If the Dracula legend is all plush red velvet, "Tuck Everlasting" is just a scrap of calico, bleached to a dry crispness. The sap runs high, but there's no juice at all.