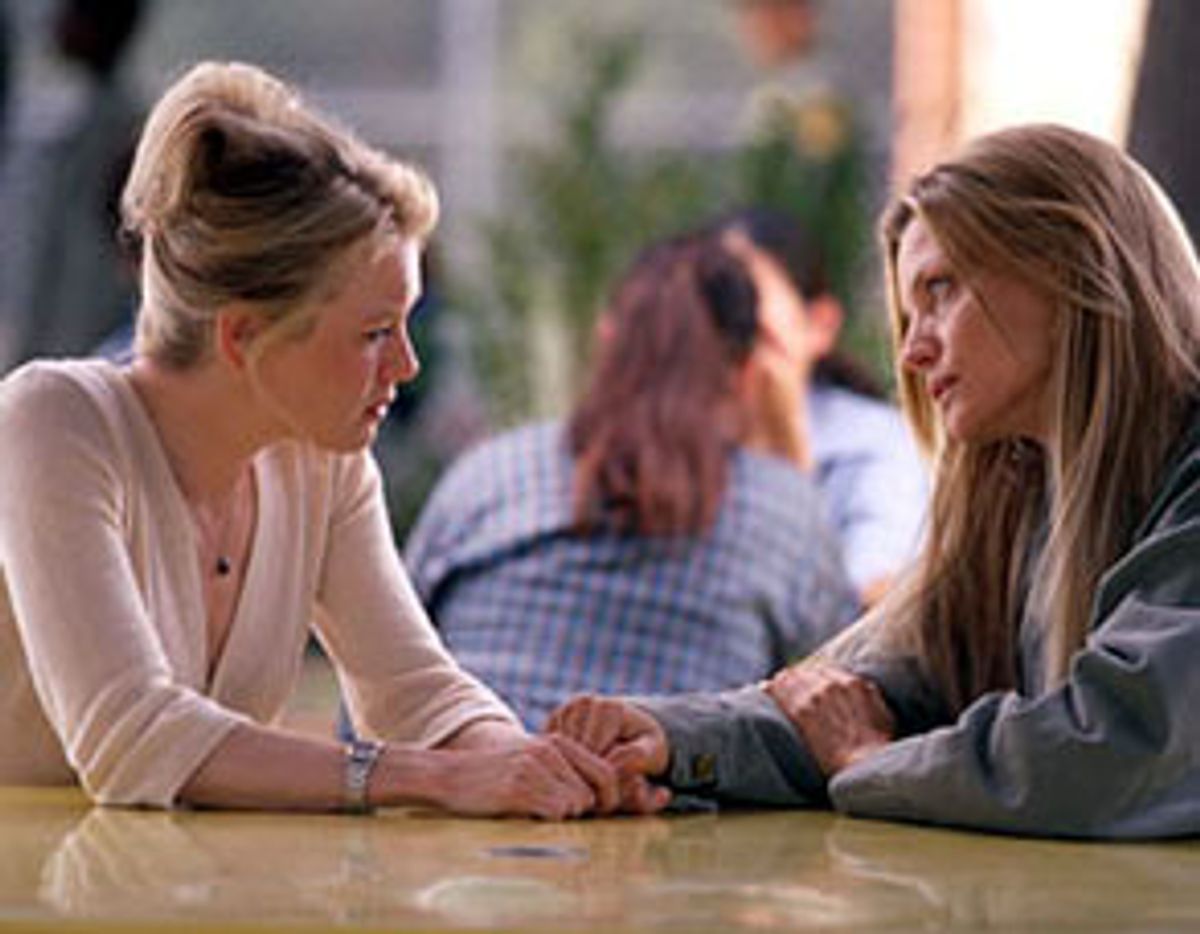 If anyone tries to tell you that "White Oleander," the movie adaptation of Janet Fitch's highly successful first novel, is a moving story about growth, redemption and self-discovery, don't buy it -- no picture as entertaining as this one deserves to be saddled with those Oprahville catchphrases. "White Oleander," too over-the-top in some places and too tastefully restrained in others, may not exactly be good. But at its best it offers pleasures similar to those of 1940s women's melodramas -- pictures in which the heroine, to borrow a line from Thelma Ritter in "All About Eve," suffers everything but the hound dogs yapping at her rear end.

In "White Oleander," it's a sensible but troubled young girl named Astrid (Alison Lohman) who's suffering these trials and tribulations, which include a crazed, jealous foster mom with a gun, and a real mom who's more dangerous even without a gun. Astrid's mother, Ingrid (Michelle Pfeiffer), is a charismatic but intensely controlling woman who's serving a jail sentence for killing her deceitful boyfriend. She's also an artist, of the stripe who think they're a superior species -- she doesn't come right out and say it, but in her mind, there's no reason she shouldn't get away with murder.

Before Ingrid lands in jail, though, we're given a glimpse of the tenuously harmonious relationship she and Astrid have built in their artsy but sparely tasteful Southern California home. Ingrid has force-fed Astrid plenty of strict instructions in how to be a free-thinking woman just like herself; Astrid is smart enough to catch on to the irony of Ingrid's particular brand of brainwashing, but it takes her most of the movie to really free herself from it.

So Astrid bounces from foster home to foster home, with a stint in between at a special school (where she learns to fend off bully girls with a pocketknife -- our Astrid is no wuss). Her first foster mother is a born-again former stripper named Starr (Robin Wright Penn), whose attractive boyfriend Ray (Cole Hauser) spells trouble for Astrid. Astrid's next foster mother is Claire (Renée Zellweger), a sensitive but fragile woman who adores Astrid but who also becomes too emotionally dependent on her. The third foster mom is a shifty, high-heel-wearing, wild-haired Russian émigrée named Rena (Svetlana Efremova), who uses her charges, including Astrid, as worker bees in her burgeoning used-clothing enterprise.

Through it all, Astrid gets tougher and wiser: Every time she visits her mother in prison, she gets a slightly clearer vision of Ingrid's treachery and possessiveness, and director Peter Kosminsky (working from a screenplay by Mary Agnes Donoghue) uses those visits as markers in the story's dramatic unfolding. At each visit, Astrid has changed her appearance at least slightly -- she goes from being a sunny blond California girl, just like her mom, to a raven-haired, tattooed Goth vixen.

The story is fairly simple: Growing up is always hard to do, but "White Oleander" takes off from a souped-up version of that maxim, giving us a girl who has more strikes against her than most. This is Kosminsky's first American movie feature. (His previous credits include a British television movie called "No Child of Mine," based on the true story of an abused girl who became a prostitute at age 11.) Kosminsky's style of filmmaking is polished and straightforward and a little old-fashioned: When Astrid's social worker tells her she's going to a special school, one with "lots of activities for young people," Kosminsky gives us a quick cut to a mini-riot, lifted right out of those '70s exploitation movies set in women's prisons, in which we see Astrid getting her lights punched out by a really big, really rough girl. But Kosminsky knows that conventional doesn't have to mean boring; the picture moves along swiftly, with very few slack patches.

But while the movie is attuned to some pretty difficult truths, I found myself wishing Kosminsky had hit them a little harder. In a good feminist world, a young girl's strongest allies should be other women. In "White Oleander," it's almost all women who, some knowingly and others not, are out to trip Astrid up during the roughest years of her life. That isn't lost on Kosminsky: It's clear he strove to make a movie about a young woman who refuses to be the victim of older women who, in one form or another, consider themselves victims.

Ingrid, as Pfeiffer plays her, has both the look and composure of a self-possessed lizard: Her eyes, which we normally know to be a dazzling blue, are icy and cold here, and you could probably count the number of times she blinks during the whole movie. Pfeiffer has a death grip on Ingrid's cold, creepy self-righteousness, and she doesn't chicken out -- this isn't a character you can have much sympathy for, and Pfeiffer knows it.

Ingrid has more slogans than a comic-book Communist. Even though she purports to be brainy and free-thinking, she's feeding off her own supply of recycled hogwash: "We're women punished for our independence," she tells Astrid at one point. "Don't cry, we're not like that; we're the Vikings, remember?" she says at another. And then there's the classic "Love humiliates you. Hatred cradles you."

Astrid, much as she feels bound to her mother, knows better than to buy her twisted version of refrigerator-magnet wisdom. At times, though, we're not entirely sure that the movie knows it's bunk. The picture has some jokingly sly moments: Two bright-eyed, well-groomed college students show up at Astrid's door to talk to her about her mother, informing her that Ingrid -- that brave, misunderstood, feminist killer artist -- has become their "project" for a women's studies class.

And yet Kosminsky could have taken the movie much further by making it only a little sharper. Pfeiffer isn't afraid to play Ingrid almost completely unsympathetically, but the movie lets her off the hook at the end. We're made to feel that she's just an imperfect creature who has made mistakes, instead of a devious, richly complex enigma -- which would have been more than enough.

But you can see that "White Oleander" is at least trying to dig away at some pretty sophisticated ideas. And Kosminsky tells Astrid's story in a way that carries us along, wondering exactly what will happen next, and how. Pfeiffer's, Penn's and Zellweger's performances are all highly stylized -- in other words, they're the kind of thing that people often mistake for overacting. But it's interesting to see how each of the actresses molds her character: Pfeiffer plays hers as a cool-blooded reptile; Penn is the warm-hearted, honey-voiced mama cat who becomes a cougar when she's threatened; Zellweger is the homey housewife undone by her own sensitivity and soft-heartedness. They're all caricatures, but the trick is that each of these actresses knows how to apply just the right embellishments. Within the movie's universe, they're completely believable.

Lohman may have it the hardest, if only because she's the novice in this huddle of pros. But she rarely looks as if she's trying too hard (her worst moments are the sappy, deadwood voiceovers she's been saddled with -- no actress could carry them off). Lohman is a guileless but wary actress, and that suits her character -- Astrid is the kind of kid who drinks everything in and processes it carefully before deciding whether to buy it or not. (We can see that this is a trait she got from her mother, and also the one that ends up being her best defense against her mother.)

Lohman is particularly sweet in her scenes with Patrick Fugit (of "Almost Famous"), the comic-book-artist and fellow lost kid she falls in love with. The two of them have an easy rapport that feels warm and genuine, and heightens the movie's view of them as smart teenagers who need to make sense of their own lives in a world of warped adults.

"White Oleander" has its overwrought moments, but then again, that's what the tradition of melodrama is all about. The movie isn't camp, nor is it self-serious and parched. It hovers somewhere in between, and somehow keeps us watching. Maybe it's only half of what it could be, but at least it's a healthy half. And in this era of mainstream cookie-cutter moviemaking, that's a feat in itself.