"It seems like exactly the wrong film to make" 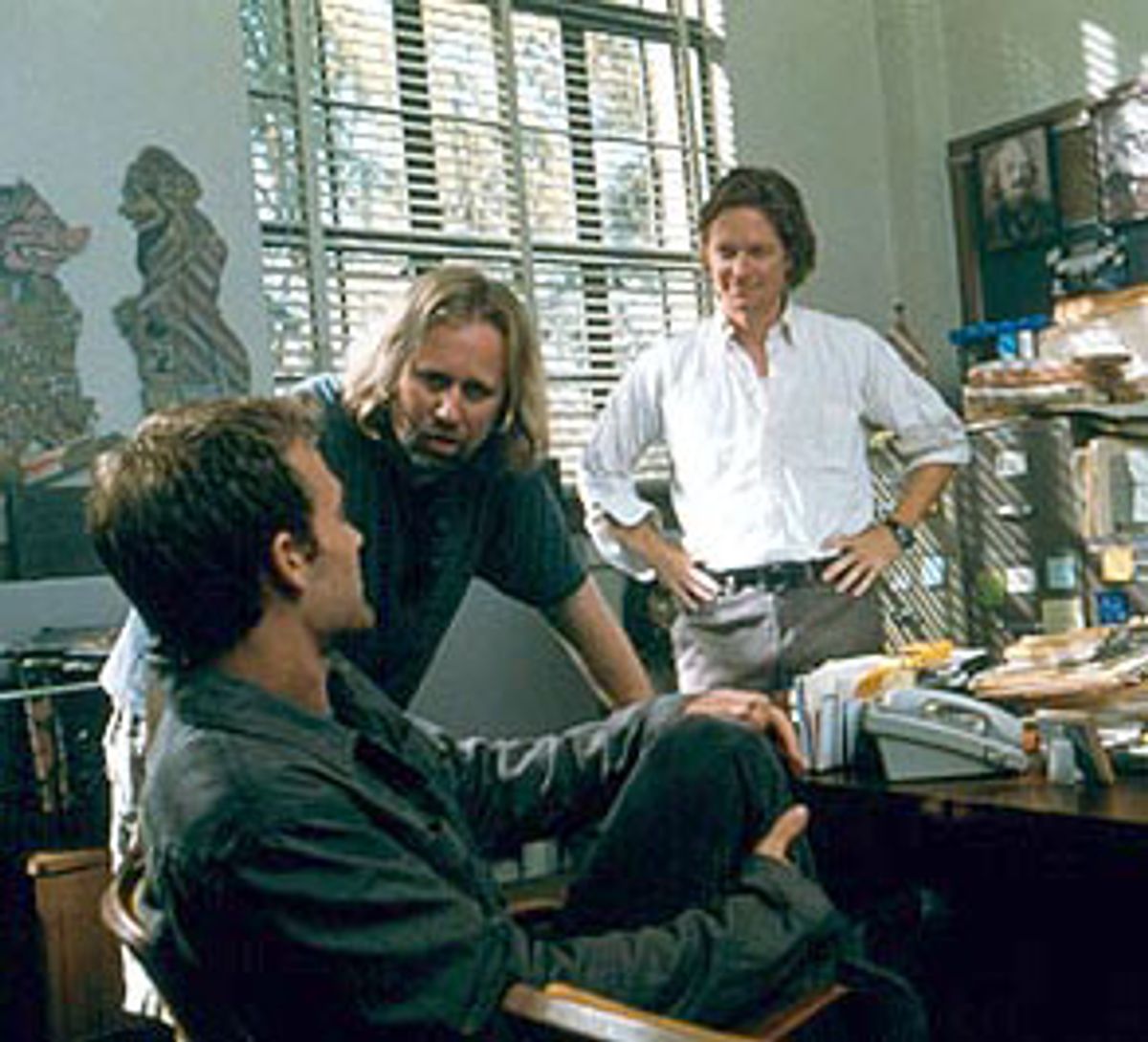 "I realized that if I didn't make a movie, one thing was certain. I would get beyond the point where anyone would ever let me make a movie again. The excitement had worn off. People knew the story: Roger Avary. Academy Award-winning screenwriter of 'Pulp Fiction.' 'Killing Zoe.' The end."

In a city where last week isn't even a memory, eight years carbon-dates Roger Avary to the prehistoric mid-'90s. An era when gun-toting, nihilistic, comic violence was as big as dinosaur pictures or Pearl Jam, and people asked, "Whatever happened to Steven Soderbergh?"

Times, of course, have changed. Avary and director Quentin Tarantino have each directed one picture since their collaboration on "Pulp Fiction," although they produced, wandered through or script-doctored many others. The two also split, loudly and publicly.

"I saw Quentin at the 'Cat's Meow' premiere" earlier this year, Avary says. "We hugged and chatted and I consider him somebody that I've been close to. But it's been many years since I've talked to him." And that, for the record, is all Avary has to offer on the subject.

It's not like Avary hasn't been busy. He's made a good living as a studio rewrite man, tried getting any number of ambitious films off the ground and, along with his wife, raised their two children.

Life goes on, and now Avary is releasing his long-dreamed-of adaptation of novelist Bret Easton Ellis' collegiate romp, "The Rules of Attraction." It stars James Van Der Beek as Sean Bateman, a college student walking through two worlds. In one, he's a violent, drug-dealing, porn-loving, on-the-run-from-gangsters punk who likes angry sex and coke. In the other, he's still an innocent, sweetly wondering which girl on campus is sending him secret admirer notes filled with glitter and kisses.

It's a strange mix of innocence and loathing, especially in a post-9/11 America searching for its best qualities, not its worst. One wonders now if the works we most associate with Ellis, Tarantino and Avary are simply anachronisms from the flippant high times of a bygone decade.

"It seems like exactly the wrong film to make, doesn't it?" Avary asks. "We were shooting on Sept. 11, which was the death of an innocence. But I was making a movie about the death of innocence. Jean Renoir's 'Rules of the Game' was made just before World War II, and that's an attack on the debauchery of the ruling class. No, it's exactly the right time to make this movie."

A bold statement, as one might have put it long ago. And to embody this attack on decadent values, Avary chose one of our least likely social critics, "Dawson's Creek" teen dream Van Der Beek.

"Well, you know what it is about James?" asks Avary. "When we first sat down to lunch to talk about this movie, he came in with that puppy-dog idol thing going on. But the minute he took off his sunglasses and I saw his eyes, I saw that he's also capable of cold emptiness. And when I saw that, combined with his ingrained likability, then it hit me: I can make a highly subversive teen film. I could drive a stake through all of them."

Indeed, if "Rules of Attraction" is nothing else, it's a corrosive revision of the genre that has topped the box office for many of Avary's MIA years. Consider "American Pie," "Road Trip," "Legally Blonde," "Orange County" and a host of others -- Avary's out to answer all that dumb fun. He opens "Rules" with a grotesque, theater-of-cruelty party scene that outgrosses them all. It's what you expect from the guy who gave us the Gimp. But later, when Avary literally replays the same scene with the same too-hip-to-feel characters, you get beneath the cool and see their hearts broken. Then you get what he means when he throws around clichés like "the death of innocence."

"I watch a lot of teen movies," Avary says. "I like all of John Hughes' movies, except 'Pretty in Pink,' because Molly Ringwald should have gone off with Ducky at the end. But most teen movies are made by people who don't remember what it was like. They're making a big lie, broad comedies which aren't representative of deeper emotions. In your teen years your hormones and feelings are this swinging pendulum. You're going through fits of melancholy and intense love. I wanted that gamut of emotion, that weird, profound time when small moments and broken relationships have such incredible weight and depth. I knew that if I could get that across I could do something really different from a normal teen film."

That said, Avary's hyperrealized vision of Ellis' multiple-first-person novel is where the argument about "Rules of Attraction" will begin. Avary has put himself squarely in the middle of the loudest debate in movies, the whining over undisciplined, unpredictable, unruly form-breaking films like "Moulin Rouge," "Full Frontal" or "Waking Life."

Avary rewinds whole scenes before us, realizes multiple points of view at once, splits screens to capture two points of view and then fuses them when the two people meet. His camera backtracks to other characters and then plays the same scene with the same people from different vantages. Scenes not directly linked to the plot can feel arbitrary and pointless. Others, like the European excursion, feel like classic New Wave liberation.

For Avary it was about capturing Ellis' Faulknerian storytelling mode, not plot or dialogue. "I worked with multiple narratives on 'Pulp Fiction,'" says Avary. "And Bret's novel is composed of multiple first-person narratives, each a chapter told by a different person. And they're all talking about various events, sometimes the same event with completely different perceptions of reality.

"It's an impossible structure to turn into normal, narrative form. But to strip away Bret's structure is to rob yourself of what makes him so unique. I wanted that literary device. And if you're doing multiple perceptions of the same moment and you just cut, the way we did in 'Pulp Fiction,' then you sever the characters both in their timeline and psychology. The key isn't to cut, but to play out the scene and pull back to another part of the room. That way you're actually uniting the timelines as one and making sure everybody is connected."

That's probably more theory than most "Dawson's Creek" fans need, but it gives an insight into how Avary has learned to balance his sensibility with the marketplace. And it took a while, let's say eight years, for the lessons to sink in.

Way back when, "Pulp Fiction" clearly left Avary in Tarantino's shadow. Yet the more Avary distanced himself from "Pulp Fiction" to establish an independent reputation, the further away he got from getting a movie made. "The only movies I was ever offered were these neo-noir crime thrillers, which I never cared for. I only wrote 'Killing Zoe' because my producer, Lawrence Bender, found a bank to shoot in. It wasn't because I had this love for bank-robbery films."

Instead, Avary tried everything but a crime film. He and comics writer and novelist Neil Gaiman planned to adapt Gaiman's ethereal "Sandman" -- not exactly "Spider-Man"-type blockbuster material. When the studio balked, they wrote a screenplay based on the Anglo-Saxon monster epic "Beowulf" that went nowhere fast. Finally, there was the film closest to Avary's heart, his biography of Salvador Dalí. (He even named his daughter after Dalí's wife and muse, Gala.)

Al Pacino was set to play the legendary surrealist painter, but the film fell apart at the last minute over budget issues. "Pacino wanted more money," sighs Avary. "Not for himself. He wanted it for the budget of the film, so, and I quote, 'I can use all my paints.'"

Which brings us up to "Rules of Attraction" and Roger Avary directing a teen film. "Part of the trick of getting a movie made is establishing yourself in a genre," he says. "Then you at least have that as a marketing tool. Look at Kubrick, that's what he did: science fiction, war, horror, crime.

"I knew I needed to make a movie as if I was a first-time filmmaker," Avary goes on. "A first-time filmmaker wants to make a loud splash. I couldn't just go out and make a mellow movie. I had to make a furious, voluminous film. Something that utilizes all the talent that I have and all the tricks I have up my sleeve and do things that people haven't done before and use inventive crazy structure. I needed to make something that screamed out 'I'm here!' I'm hoping people will say 'Wow, if he can do that, imagine what he could do with our crap!'"

Avary pauses, perhaps thinking over the last eight years. "Maybe you should take out that last word."

Ben Schwartz is a writer in Los Angeles.