Once again, almost every character on TV is a cop, a doctor or a lawyer. Why? 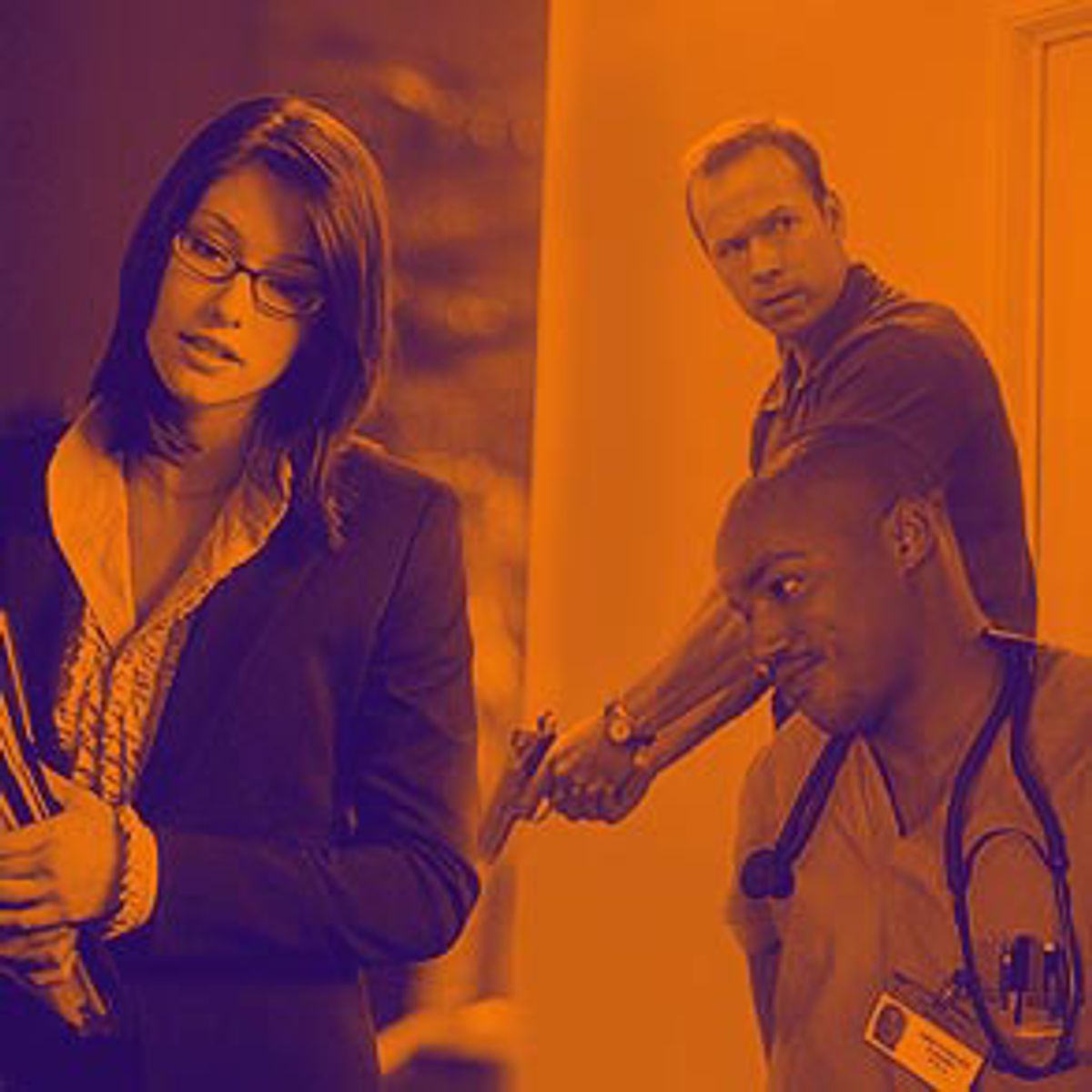 If the old cliché about art imitating life is true, what truths can we take from the new fall TV schedule?

First, there are a lot of cops in our world, with the vast majority of us being either detectives, coroners, profilers, special agents or cab drivers who used to walk the beat. Second, because so many of us are cops, the remainder of us are either doctors or lawyers. Those of us who went to medical school are usually witty and sexy. We lawyers are also sexy, but we are often emotionally conflicted, if not downright overworked with all the cases flooding in -- thanks to so many cops.

Oh yes, there are a few others in our universe. We haven't forgotten the goodfellas, or that family of undertakers on cable. Or the high school of highly dedicated teachers -- many of them recovering lawyers. Or that guy who runs a bowling alley -- also an ex-corporate lawyer. Or that lonely crew of White House do-gooders (we suspect a few law degrees hiding there too).

As for everyone else in the cosmos? Take your pick: victim or perp.

Ever since the networks previewed their new fall lineups, TV critics have been bemoaning their play-it-safe attitude -- especially in the dramas. And when it comes to professions, they're right.

While there is the occasional foray into historic nostalgia ("American Dreams") or science fiction ("Firefly"), the vast majority of this season's dramas center upon the same old vocations. Gone from the schedule is that show about a college professor ("Max Bickford") though Richard Dreyfuss was reportedly eager to give the show another try. Also long gone is "Law and Order" creator Dick Wolf's foray into newspaper journalism, "Deadline," and those regrettably less than stellar looks into the machinations of the U.S. Senate and Supreme Court ("Citizen Baines," "First Monday").

Naturally, there's a method to the industry's madness. As insiders are quick to point out, behind the veneer of quality entertainment lurks a multibillion-dollar industry. It isn't entirely surprising that stockholders at General Electric, Viacom and Disney like to play things safe.

How the business of television translates into what you watch from your Barcalounger is a study in how fortunes are made in Hollywood, and what show creators must do to get their ideas viewed and bought.

Or, as television writers will blithely tell you, the lottery never looked so good.

Each year, the major networks review hundreds if not thousands of pitches for possible new shows. Of these, only about 100 pilot scripts are commissioned, and of these, perhaps 20 or so possible dramas are filmed, with nary a fraction of pilots finding their way into the fall lineup.

Which means, with competition fierce, and rewards for creating a successful dramatic franchise high, today's creative result is often an exercise in groupthink. Though modern conventional wisdom can often be trumped by successful shows from the past, a sampling of rules from Network Programming 101 includes staying away from low-stakes professions, avoiding basing shows on foreign soil, or jumping into the middle of military conflicts ... with apologies to "Lou Grant," "China Beach" and "M*A*S*H."

Past rules have also dictated steering clear of wonkish Washington dramas. Often, it's only after conventional wisdom is ignored successfully that networks will briefly broaden their formula to accommodate this aberration. Thanks to the mega-success of "The West Wing," for example, this year's list of produced pilots included a number of shows about government. With dramas like "Ed" and "Boston Public" also finding core audiences, the networks also produced a handful of pilots set in backwater towns and schools.

Much rarer on this year's list were dramas that explored subject matters entirely new to network television. Which isn't to say there weren't a few. CBS shot "Lefty," about an inner-city priest, at a Miami parish. ABC tried "Astronauts," about astronauts competing for a mission to Mars.

Here's a closer look at three other nontraditional dramas -- each likely to air later this season, and all hoping to become the next "Seinfeld" or "Buffy the Vampire Slayer" -- midseason replacements that audiences watched.

Civil war has broken out in central Asia. A radical religious separatist group is challenging the government of Uzbekistan, and fleets of international war correspondents have been dispatched to the region to cover the bloodshed. One such reporter is portrayed by Jeff Goldblum, a newspaper foreign correspondent, who seeks to balance good reporting with staying alive.

Writer Peter Noah, whose other credits include "Alice" and "One Day at a Time," says he was drawn to the story idea because he's long found there to be a "French foreign legion" aspect to overseas reporting. "There's something very noble about it and there's a strong vicarious aspect to war reporting from an audience point of view. In the normal kind of action adventure, it's hard to project yourself as Schwarzenegger, but I think we can all imagine ourselves as correspondents. It doesn't take a huge imaginative leap to see it as something we all might do."

With Goldblum expressing strong interest in the subject, and the nation's expanded worldview in the wake of terrorist attacks, the network moved forward with production of a pilot, even though there's long been strong industry bias against journalism dramas.

"The most basic thing you look for when doing an hour is life and death," Noah says. "There's often a prejudice against journalism shows because there's a concern that journalists are passive and not actively involved in dramatic circumstances. However, here that didn't trouble me because the journalists themselves are being put into positions of having their lives threatened."

Though Noah says the network was pleased with the pilot, NBC went with "Boomtown" as its only addition to the 10 o'clock schedule. As for "War Stories," the pilot has been expanded into a two-hour television movie, which should air later this season.

Noah remains hopeful. "If it does well, it will tell people there's an appetite for this kind of show and it might be something that works as a series."

Unbeknownst to the rest of the world, the Vatican actively investigates miracles. The majority of these turn out to be hoaxes, but when a young Vatican investigator, played by Skeet Ulrich, finds himself in the middle of something quite real, it leads him into a world of underground investigations balancing faith and the paranormal.

Conceived by Richard Hatem ("The Mothman Prophecies") and co-written and produced by David Greenwalt, who undertook the same duties on "Buffy the Vampire Slayer" and "Angel," the show aspires to take a dark though sometimes humorous look into a world where too often the unexplainable happens.

"One of the ideas the show advances is the notion that if what you believe on Sunday morning in church actually started happening on Tuesday afternoon, it would scare the living bejesus out of you," Greenwalt says.

With a cast including Ulrich and Hector Elizondo, the network has ordered 12 episodes of the show and plans to introduce it midseason. Greenwalt credits "Buffy" creator Joss Whedon for making it possible for shows like "Miracles" to even be considered by the networks. Still, Greenwalt aspires to more subtly tread the worlds of reality and science fiction -- saying there will be no monsters wearing rubber masks on ABC.

The show's darker nature and unconventional backdrop did elicit some concerns at the highest levels of Disney, though Greenwalt says the show's Vatican connections weren't the network's prime concern. "I think they were a little more worried about us sticking a syringe in someone's eye within the first 30 seconds."

Part "Macbeth," with a dash of "The Godfather" and "Miami Vice," "Kingpin" narrowly missed the fall schedule, giving way to the police-themed "Boomtown" on Sunday nights. However, when the series, which looks at a Mexican drug lord and his cartel, makes its debut later this season, creator David Mills is expecting some controversy.

"Make no mistake, they're just dipping their toes in," Mills says of the six episodes the network has ordered. "I know for a fact that the advertising department is frightened of this show."

Last year, Mills heard that NBC programming director Andy Lack was interested in trying a drama with the crime family feel of "The Sopranos" set in the backdrop of the movie "Traffic." A former writer for such powerhouses as "ER" and "NYPD Blue," Mills envisioned a modern-day retelling of "Macbeth."

Using a largely ensemble cast, "Kingpin" tells the story of an ambitious Mexican drug lord who murders his uncle to take control of the family cartel, and is spurred on by his highly ambitious American-born wife. Show plots include grappling with U.S. drug enforcement, fighting over turf with other cartels and arranging multibillion-dollar drug deals with Asian warlords in exchange for Thai heroin.

"The mandate was to do an HBO show for the network, and I think that's what we've done," Mills said.

Whether it will attract a network audience, Mills says, he doesn't know. The fact that networks have steadily seen audience share dip thanks to edgier fare on cable doesn't necessarily mean more cutting-edge network shows will follow.

So far, it's been the opposite. "I see more people wanting to make the next 'CSI' or 'Law and Order' -- the next big franchise," Mills says. "It's the franchises that are making everybody rich, but they're also the most traditional story lines."

So while cable continues to break new ground in terms of creative direction, it's possible the networks will take an opposite approach, retreating to the tried-and-true formula of traditional dramas to shore up what they perceive as their base.

"Ideally, network television would like to do everything," Greenwalt says. "But to the degree that it tries to do absolutely everything, it might ultimately suffer. Obviously, the networks want to hold on to their audience -- and they also want to build a new audience too -- but what they ultimately are longing for is a brand. There's a need for strong brand recognition in a world where there is so much choice."

Which means for cop, lawyer and doctor dramas, conformity might continue to be just what the doctor ordered.

Dann Halem is an LA-based journalist who has written for Slate, Entertainment Weekly and Chicago Magazine.