Joan Collins has the right idea

Biologically, it makes more sense for older women to have sex with younger men -- unless they want to talk afterward. 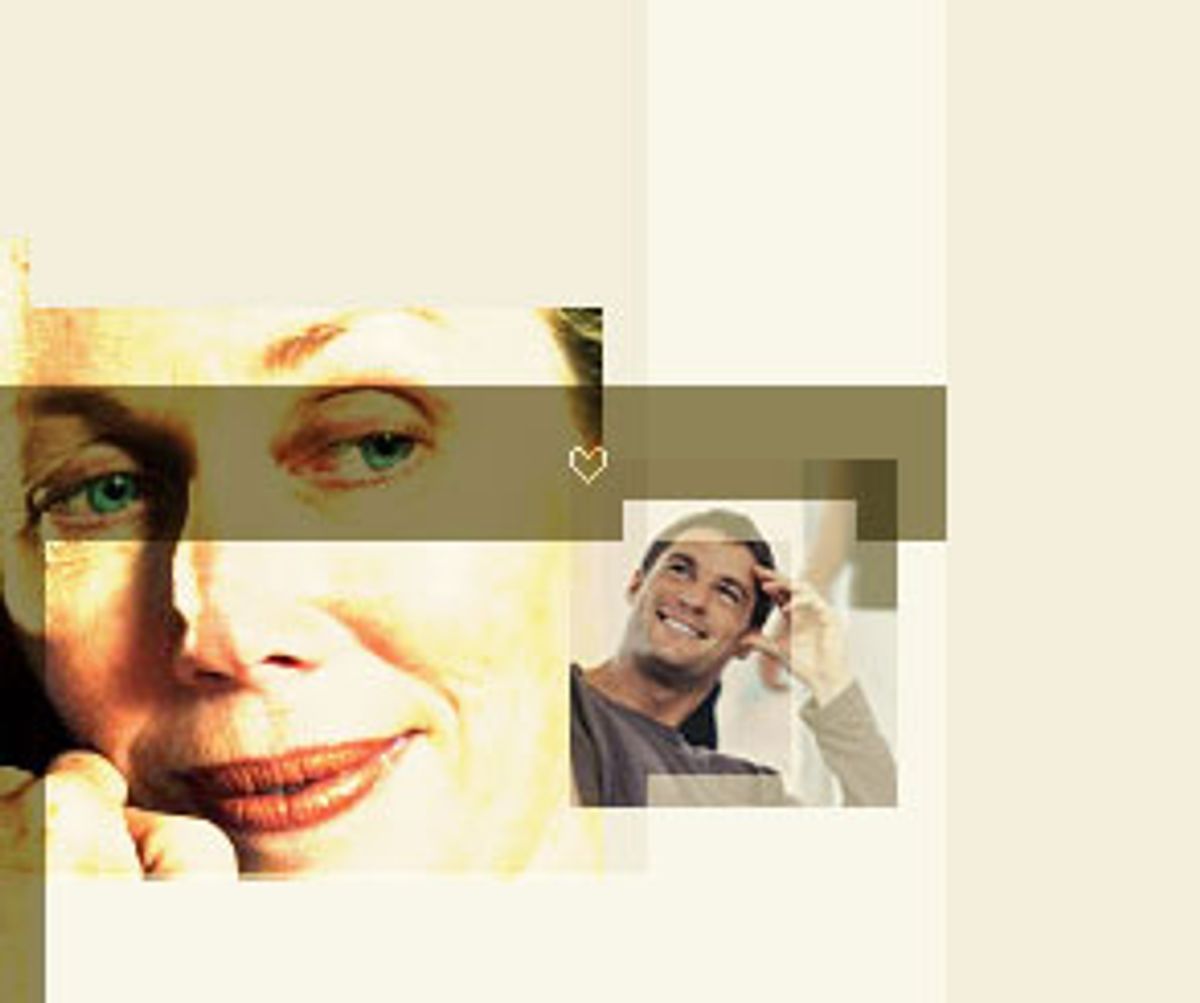 I can't seem to get away from news about cross-generational relationships. Some of the stories, thank goodness, are about older women and younger men. There's the always-juicy gossip about actress Joan Collins' marriage to a husband 32 years younger than she is; iVillage has a special "younger men" section; and then there's Marissa Monteilh's book "May December Souls." Even Bollywood, the Indian film industry in Bombay that has thrived on stories of men romancing women a quarter their age, is suddenly releasing four films with leading actresses exploring their sexuality with much younger men.

If I weren't happily married, maybe I could have a date with one of these tycoons. I meet VIP matchmaker Lisa Clampitt's standards: I'm attractive (she actually says the standard is beautiful, but with Photoshop that's just an airbrush or two away); I'm thin (112 on a 5-foot-7 frame, which might be a heifer compared to Kate Moss, but I'm a famine survivor by American, McDonald's-loving standards); and I have an artistic side (being silly enough to pay my bills by writing for a living qualifies as artistic or nuts). So far, so good. Uh-oh. I just saw the last requirement. Clampitt looks for women in their 20s and early 30s so the men can experience "five years of fun and then have kids." Damn. I'm 51, old enough to be the mother of most of the girls. No kids for this post-menopausal woman.

But don't worry, girls; don't let it get you down. If anything, once you know just a touch about the biology of aging, you might be glad you aren't in the clutches of some older man. These older man-younger woman relationships don't make a lot of sense, at least in bed.

It's pretty simple. A man's testosterone peaks around 21. By the time a man reaches his late 30s, his testosterone levels have dropped by half. My favorite little stat to scare any overly macho man is that almost 80 percent of men over age 42 have some degree of impotency. The testosterone loss also means they lose muscle tone and bone mass (pec implants look good in photos but feel like rubber, so forget the surgery, fellows), have foggier memories, suffer bouts of fatigue and depression, and -- most critical for most men -- lose their sex drive. Also, higher levels of testosterone in middle age tend to cause baldness, so the men who keep their levels fairly high often pay the price with hair loss. Welcome to a midlife crisis, fellows.

On top of the falloff in testosterone, men experience drops in other hormones such as DHEA (it stands for Dehydroepiandrosterone, which will tell you why everyone abbreviates it), which is only a couple of steps removed from testosterone. As DHEA drops, the body is more susceptible to illness, fat replaces muscle and, again, sex drive declines. Cortisol, often dubbed the "stress hormone," is manufactured by the adrenal glands, and its production also diminishes in middle age. That means less energy. And to top it off, human growth hormone, which helps everything from muscle tone to skin firmness, starts plummeting through the 30s and 40s. It's not a pretty sight. These drops exacerbate every bad effect of the testosterone dive. In severe cases, doctors describe the condition as "andropause," the male equivalent of menopause.

No wonder golf becomes a popular pastime for many middle-aged men. And none of this physical meltdown signifies high-octane performance in bed. While plenty of over-the-counter supplements of DHEA and pills promising to promote the production of growth hormone and testosterone are sold in health food stores and over the Internet, no one is quite sure what the right dosage is, whether the pills really work, and if there are any long-term side effects from trying to artificially restore the hormones that mother nature has taken away.

Sure, Viagra helps. That drug at least will guarantee an erection, which is half the battle for the testosterone-starved older man. But Viagra can cause side effects, from relatively mild ones like headaches, stomach upset, flushed skin and urinary tract infections, to serious problems like heart attacks. Some researchers have tied more than 500 deaths to Viagra, while Viagra boosters contest the link.

For any man who isn't eager for Viagra, are there alternatives for boosting the flagging testosterone levels? Some men might be tempted by the advertisements for testosterone replacement. Doctors prescribe the wonder medication either in pills, injections or patches. It does what it's supposed to do, and men who start the therapy love their renewed energy, muscle tone and sexual vigor. The downside is a very real risk of prostate cancer, as well as less life-threatening side effects such as sleep apnea (a cessation in breathing while sleeping, which sometimes leads to blood pressure problems and recurring, severe headaches). Isn't a risk of cancer vs. a restored sense of vitality the same quandary that women have long faced when it comes to hormone replacement therapy? The difference with men is that the medical community never adopted widespread standards of trying to put all middle-aged men on testosterone replacement. The risks were simply too real.

There is substantial anecdotal evidence that a healthy diet and lots of exercise -- good things for any of us in our highly charged lives -- stabilizes some of the hormone drop for men. However, a diet very low in fat, though good for the heart, might not be good for the sex drive, as it tends to suppress the manufacture of testosterone. So running a few days a week, some weight training and a healthy diet with about 25 to 30 percent of the good types of fat might be the best bet for naturally keeping testosterone at a reasonable level.

Women also have problems as we age, and a lot of us after menopause have little desire to hop in bed for a round of intimate contact. When I went through menopause, for about six months sex was the furthest thing from my mind (pity my patient husband, whose testosterone level still seems OK at age 48). There are some doctors who call women's lack of sexual interest after menopause a "desire phase" disorder. Now that is going a tad far for me. The decline in sexual desire is really influenced by hormones, including testosterone, just as it is for men.

The fact that male sex hormones can boost our sexual desire is nothing new. The ancient Greeks and Romans unwittingly used testosterone to increase sexual appetite. Following a hard day of fighting, gladiators often bathed in olive oil. After the bath, the olive oil (which, because of the gladiators' sweat, now contained small quantities of testosterone) was carefully collected and stored in small jugs, which were then sold to women who smeared themselves in the oil. The effect was a slight increase in testosterone levels and therefore in their sexual desire.

Today, since gladiators are scarce, mother nature has come to the rescue for women. The ovaries, although incapable of producing estrogen after menopause, often continue to produce testosterone for several years. That's why some women have a strong sex drive for a considerable time after menopause. While our testosterone levels are only one-tenth those of men at younger ages, we almost catch up in later years.

I've contended for a long time that women stay afloat a bit more steadily and longer. That was born out just last week when a global survey (sponsored by Pfizer, the manufacturer of Viagra), conducted in 30 countries among 27,780 adults aged 40 to 80, found that women become sexually dysfunctional at about half the rate of men. "To the extent that women are sexually active, they may be facing men who have problems," concluded lead researcher Edward Laumann, a University of Chicago sociologist. That means from a strictly biological view the correct cross-generational relationship might be an older woman and a younger man. For women interested only in a physical relationship, landing a younger man closer to his sexual peak can't hurt. The problem for me and most of my friends is that we also want conversation and intellectual stimulation. Unless I'm fascinated by the man's mind and soul, it would be impossible to get excited about getting into bed with him.

We live, however, in a youth-obsessed culture where style often seems to matter more than substance. Every time a new novel or film matches a cross-generational couple, it's likely to generate extra buzz. That will ensure it will be part of our cultural scene, even if it is seldom dealt with accurately.

"The Man From Elysian Fields" is an exception, at least when it comes to the older man-younger woman relationship. In the film Andy Garcia, a struggling novelist, is forced to supplement his income by working at an elite male escort service run by Mick Jagger (who in real life certainly knows a thing or two about dating beautiful younger women). Garcia's new job becomes interesting when an older, wealthy man (James Coburn) -- who can't perform sexually with his own wife -- allows his wife to hire Garcia to have sex with her.

The story line may be scary for men approaching their later years, but at least it's more realistic than the idea that a man's money can make up for his lack of testosterone.

Trisha Posner is a writer who specializes in women's health. Her first book was "This is Not Your Mother's Menopause;" her next is "No Hormones, No Fear," to be published by by Villard this November.