Greg Kinnear's brilliant performance honors the pervert star of "Hogan's Heroes" in this sordid tale of a creepy charmer's fatal descent into the fleshpots. 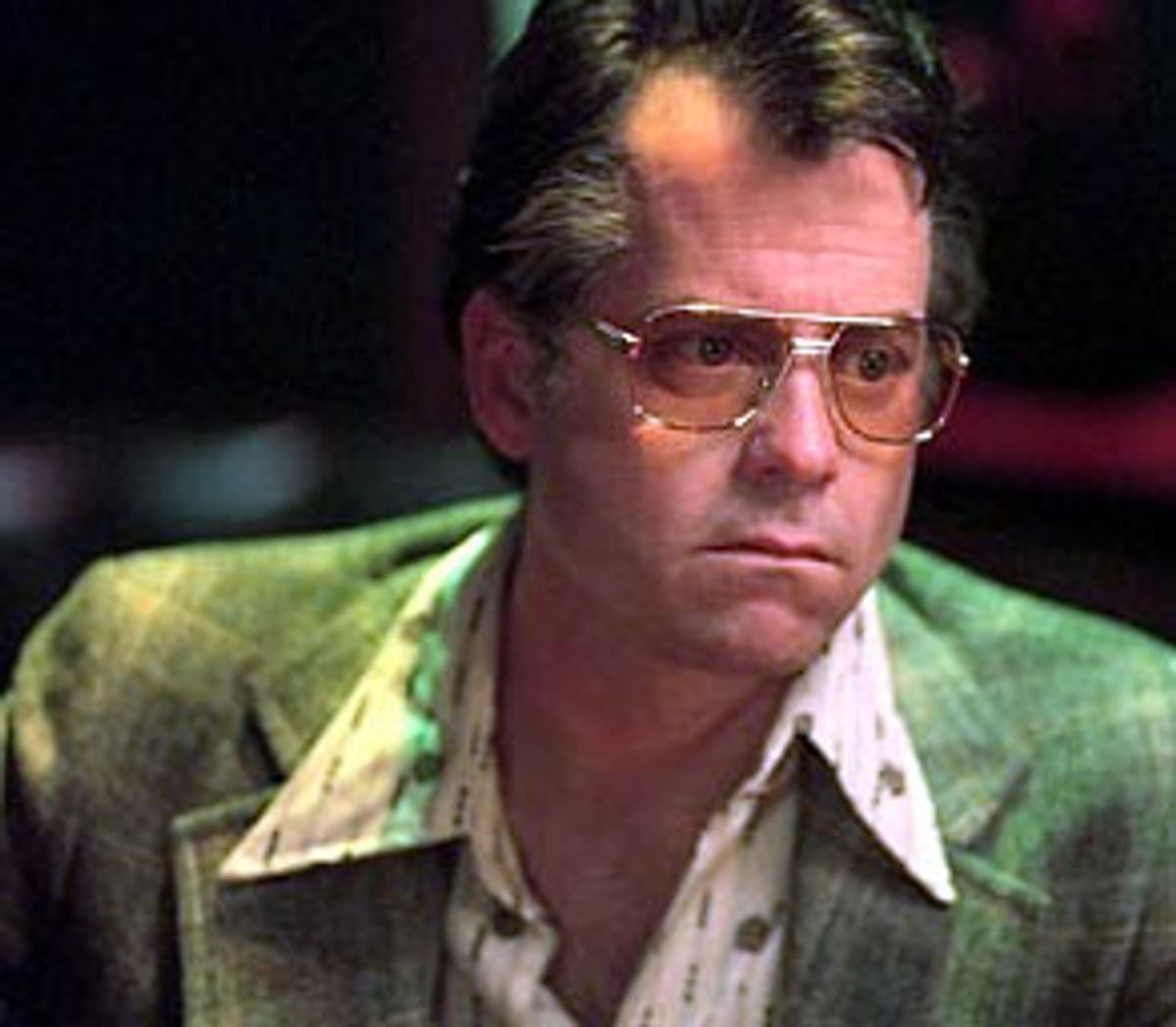 There's an important lesson to be learned from both the sad and sordid life of Bob Crane and Paul Schrader's movie about it, "Auto Focus": A cautionary tale is only as good as the actor who carries it on his back.

"Auto Focus" is so well-intentioned, and so sympathetic toward its subject, that I found myself reaching out toward it instinctively -- to close down to it would only seem inhumane. But as both a movie and a fable, it nearly buckles under the weight of its own intentions, at least partly because Crane, a major celebrity in the pantheon of '60s TV sitcoms but a minor one in every other respect, can barely carry the weight of his own story. Crane's saga is sad, all right. But he's still damn lucky, as Schrader is, to have Greg Kinnear around to give it the shape and heft it just doesn't have on its own.

In "Auto Focus" Kinnear pulls off the feat of making us feel something for Crane, the smirky but popular actor who starred in "Hogan's Heroes" from the series' beginning, in 1965, until its end, in 1971. Crane lives on in infamy, as well as in reruns: From the late '60s until his murder, in 1978, he amassed hours and hours' worth of pornographic videotape documenting his sexual encounters with a seemingly endless number of women -- women who were, we suppose, easily seduced by the power of his celebrity. The videos had been made on equipment supplied to him by a guy named John Carpenter, who became a longtime friend or a hanger-on, depending on how you look at it. Carpenter was a suspect in Crane's murder, although he was tried and found innocent. (He died in 1998 at age 70.)

Schrader, working from a script by Michael Gerbosi (which was adapted from Robert Graysmith's book "The Murder of Bob Crane"), traces Crane's life from the mid-'60s, when he was working as an amiable disc jockey in Southern California while looking for work as an actor, to his death. The picture's first half is the most effective: Crane has an ostensibly well-balanced, nicely manicured life with his high-school sweetheart and wife Anne (Rita Wilson, in a sharply observed performance) and their several children.

When his agent, Lenny (Ron Leibman), tells him about the "Hogan's Heroes" role, he's understandably dubious about a show set in a World War II prison camp. But he and Anne talk about it; she reads the sample script and decides it's funny. She urges Crane to give it a closer look. The scenes are significant, as Schrader films them and as the actors play them, because they establish the easy intellectual rapport at work in the marriage, a connection that seems to be forged less out of marital habit than from the daily pleasure that comes from living with another human being to whom you're well suited.

It's clear that Anne has more common sense than her husband does, but the downside of that is that, like many women of her era, she's fueled by the drive to be normal, conventional and proper; the couple's attempt to be good Roman Catholics makes the going even tougher. She's upset by the stacks of girlie magazines she finds in her husband's garage darkroom (he's what they used to call, in the old days, a "photography enthusiast," as well as an amateur jazz drummer), and worries that their mere presence means she isn't enough for him.

As Schrader sees it, the mid-'60s Bob Crane -- the Crane who still worked hard at being faithful to his wife -- lived in a world papered with nudie cuties, women who were only as real (and as "damaging") as the magazine stock they were printed on but who gave infinite pleasure just by baring a nipple or two or winking flirtatiously. (Later in the movie, long after Crane's obsessions have begun to mess up his life and his career, he keeps asserting that he's just a guy who likes sex, and how normal and healthy that is -- the desperate words of a man who protests too much.)

Crane's role on "Hogan's Heroes" led to the kind of notoriety that made it easy to score babes, as well as to attract the wrong sort of friends. Carpenter is played by Willem Dafoe with both lizardlike ooziness and a sometimes touching vulnerability -- it's a weird mix, but it works. Carpenter is without a doubt the wrong sort of friend. Crane first meets him on the "Hogan's Heroes" lot -- he's an audio whiz who's installing some fancy equipment in the trailer of fellow "Hogan's" star Richard Dawson (Michael Rodgers). (One of the movie's more entertaining sub-threads is the way it keeps circling back to Dawson and Crane's dislike for one another; the irony is that Dawson comes off as the bigger creep.) Carpenter introduces Crane to the then-fledgling video technology; before long, he's got Crane hooked on the sleaziest of its 1,001 uses.

"Auto Focus" is a deeply moral movie, which is not to say it's a moralistic one. The press surrounding the picture has reminded us that Schrader was raised a Calvinist -- he never even saw a movie until he was in his late teens. I'm not really sure that Schrader's background is more relevant to this movie than it is to any other. But what makes him such an interesting filmmaker (and if he's sometimes not a very good one, at other times he's remarkable) is that in most of his movies, particularly those made in the past 10 years or so, no immoral or misguided act goes unnoticed.

But Schrader does exactly the opposite of judging his characters. Instead, he watches them through the camera lens not with detachment but with so much attuned sympathy that he seems to feel a kind of helplessness; whether we're talking about Patty Hearst locked in a closet by her captors, or the long-suffering Joseph Fiennes character in the marvelous but little-seen 1999 picture "Forever Mine," when I watch a Schrader movie I often sense his inability to step in and fix things for his characters as if it were a spectral presence. (I notice it less, of course, in the movies that Schrader has only written, like "Taxi Driver," which suggests that it's a distinctive quality that comes out only in his filmmaking.)

Maybe that's why the first half of "Auto Focus" is so affecting -- you can feel Schrader looking through that lens every minute. But in the movie's last hour or so, things start to feel more automatic and calculated; we realize that what we've got here is a fairly typical treatise on the price of fame and celebrity, and not much more. At the point where Crane is really sliding into decline -- it's the mid-'70s, he's been doing dinner theater for years, his second marriage is falling apart, and despite how unsalable he is, he's begging his agent to find him some decent work -- Schrader switches to grainier film stock and bled-dry colors; the camerawork is shakier, and there are more inexplicable tight close-ups. It's a marked switch from the candyland colors of the earliest sections of the movie, and it feels facile and gimmicky. You wouldn't expect a seasoned filmmaker like Schrader to go for such thumpingly obvious effects.

And considering how sensitively calibrated Kinnear's performance is, you don't need him to. Crane knew that his big selling point, as a human being and as a commodity, was his likability. Kinnear riffs on that without milking it. You know when he's turning the charm on full-blast, as he does when, in a mid-'70s scene, he surreptitiously asks a bartender to switch the bar TV to the channel that's playing "Hogan's Heroes," then acts surprised when a comely maiden sidles up to him for an autograph. Kinnear pulls off the trick of making Crane seem genuinely likable and not just unctuous. You notice it particularly in the early scenes, like the one in which Kinnear, just getting used to his TV celebrity, is delighted to have the chance to sit in on drums with the house band at a strip club. The way he perches behind the kit, grinning as he sets the beat for a run-of-the-mill bump-and-grind routine, tells you everything you need to know about how sincere, and how modest, this guy's early dreams were.

The memory of those early scenes stick with us when, later in the movie, we see a much more dissolute and washed-up Crane sitting splay-legged in a dismal basement rec room furnished with fake hardwood and pilly, saggy tweed furniture. Carpenter has dropped by to visit, bringing with him a tape of some recent exploits; he pops the tape in the VCR and before long he and Crane, bored and horny, begin to idly play with themselves in front of the flickering image. There's nothing shocking about the scene. (The movie has already hinted at Carpenter's submerged homoerotic attraction to Crane.) In fact, what's shocking about it is how languid it is; it's the perfect representation of frisky sexual obsession turned into dopey underwater ballet.

But Kinnear holds you every minute. He's a great mimic, nailing down Crane's hyperstylized "Hogan's Heroes" mannerisms perfectly. But in the end, he pulls off the far trickier feat of making us feel extraordinary sympathy for a character who has sunk too low even for our pity. The real Bob Crane was a mere footnote in the world of '60s actors; why would we be interested in him at all if not for his sensationalistic death and bizarre pornographic legacy?

The answer is, we wouldn't. And yet Kinnear plays Crane as if that thought had never occurred to him. He forges through "Auto Focus" with utmost faith that we will care -- and somehow we do. His performance has to be one of the most sympathetic acts of decency one actor has ever extended to another. Crane always wanted to be a real, respectable movie actor. Channeled through Kinnear, he finally gets his wish.