The "I want YOU to invade Iraq" campaign offers war protesters an alternative to "Mao more than ever!" 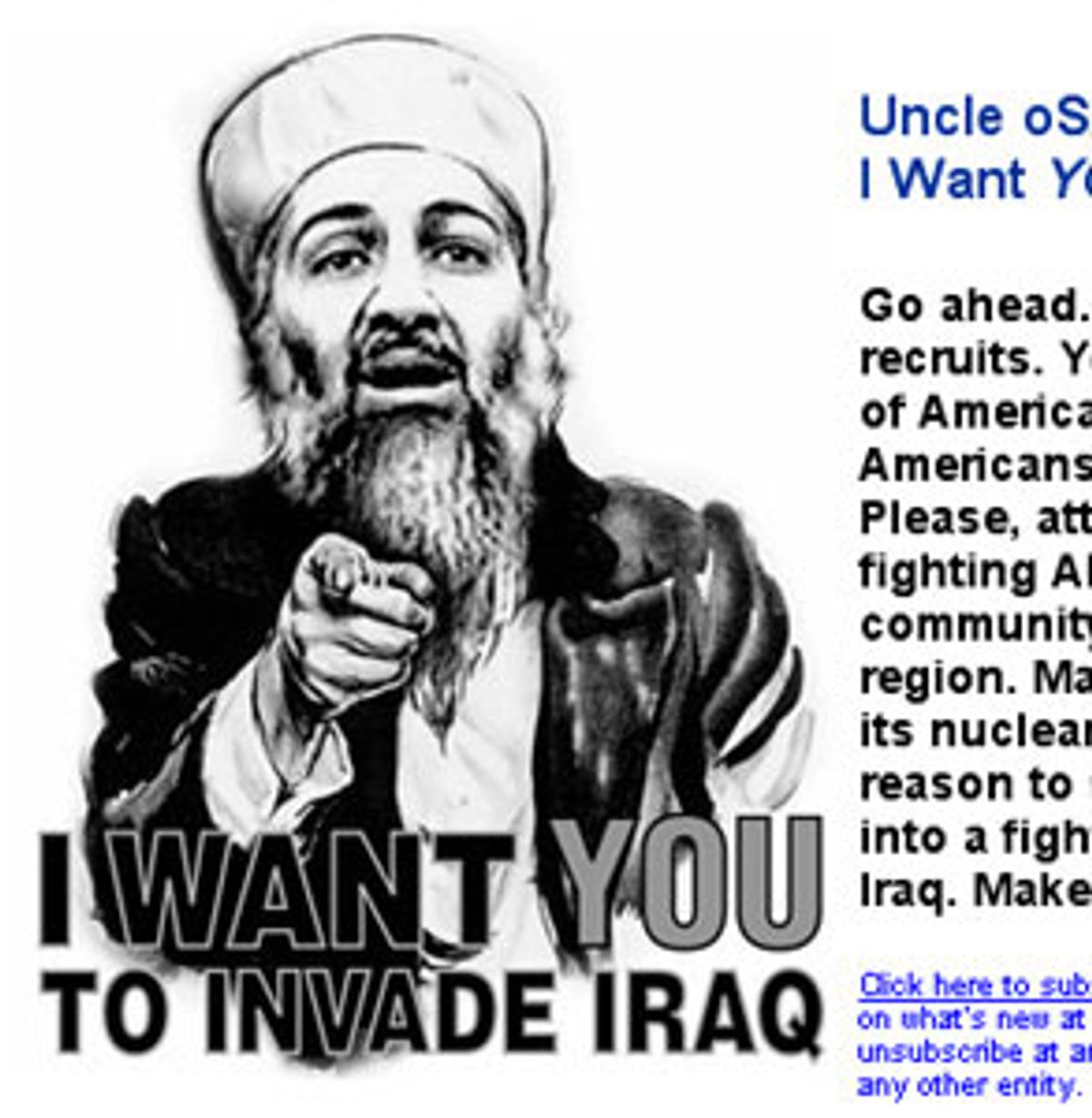 Sane opposition to the growing drumbeat for war in Iraq has suffered from a dearth of catchy slogans and incendiary images. While the hard left paints Hitler mustaches on the president's face and screams, "No Sanctions, No Bombing!" and "War Sucks!" others who recognize the evil in Saddam but fear the fallout from unilateral aggression are stuck. "Multilateralism" and "containment" aren't words that play well on bumper stickers.

But David Fenton, owner of the public-interest advertising firm Fenton Communications, and John Moyers, editor of the liberal policy magazine TomPaine.com, have conjured up an image that realists can use to compete with the "Mao more than ever!" crowd. A takeoff on the old "I Want You" recruiting post from World War I, it features Osama bin Laden pointing at the reader Uncle Sam-style, with the headline "Uncle oSAMa Says: I Want YOU to Invade Iraq."

First published Sept. 24 on the New York Times Op-Ed page, it's become a phenomenon. Jann Wenner printed it for free in the new Oct. 31 issue of Rolling Stone, as did the German newspaper Der Spiegel and other newspapers in Europe. A Greek anchorperson held it up on the nightly newscast, while 20 people throughout America have asked Moyers for permission to publish it in their local papers -- at their own expense. College kids are handing it out on campus flyers, or blowing it up and making posters. On Sept. 25, Sen. Max Cleland, D-Ga., held it up at the Senate Foreign Relations Committee and read it verbatim into the Congressional Record. Last Monday, a group of foundations and individual donors paid $46,000 to have it run in the New York Times again, this time as a full-page ad. "I've never seen anything take off as much as this," says Fenton, who has been creating public-interest advertising for 20 years.

The reason it's hit such a nerve is clear. It's a striking image that makes the only case likely to sway most Americans: Attacking Iraq will make them more vulnerable to terror, not less. "Go ahead," it says. "Send me a new generation of recruits. Your bombs will fuel their hatred of America and their desire for revenge. Americans won't be safe anywhere. Please, attack Iraq. Distract yourself from fighting Al Qaeda. Divide the international community. Go ahead. Destabilize the region. Maybe Pakistan will fall -- we want its nuclear weapons. Give Saddam a reason to strike first. He might draw Israel into a fight. Perfect! So please -- invade Iraq. Make my day."

Moyers had been looking for a concise way to convey the realist argument against war, and when Fenton suggested Uncle Osama, "It gelled in my mind immediately." Says Fenton: "This is an argument that has appeared a little bit in opinion columns and can be found in the testimony of ex-military officials and ex-diplomatic officials, but it's not an argument that the public has really heard. The challenge was to create an image that would get a lot of free media attention and insert into the debate more forcefully the argument that a unilateral U.S. invasion of Iraq would be dangerous for Americans."

For Moyers, (the son of PBS star Bill Moyers, whose foundation is a major funder of TomPaine.com) it was important to create a stark critique of the administration rooted in concern, rather than contempt, for the people it purports to represent. "I believe that liberals can be patriotic, too, and I think it's good for critics of the administration, left or right, to keep their head about them. I'm a liberal but I'm also a realist. It's possible to be idealistic and have your feet on the ground. It's possible to aim high and have the facts on your side."