This far-fetched and far-flung adventure romp might be old-fashioned, but it's also one of the best swashbucklers in movie history. 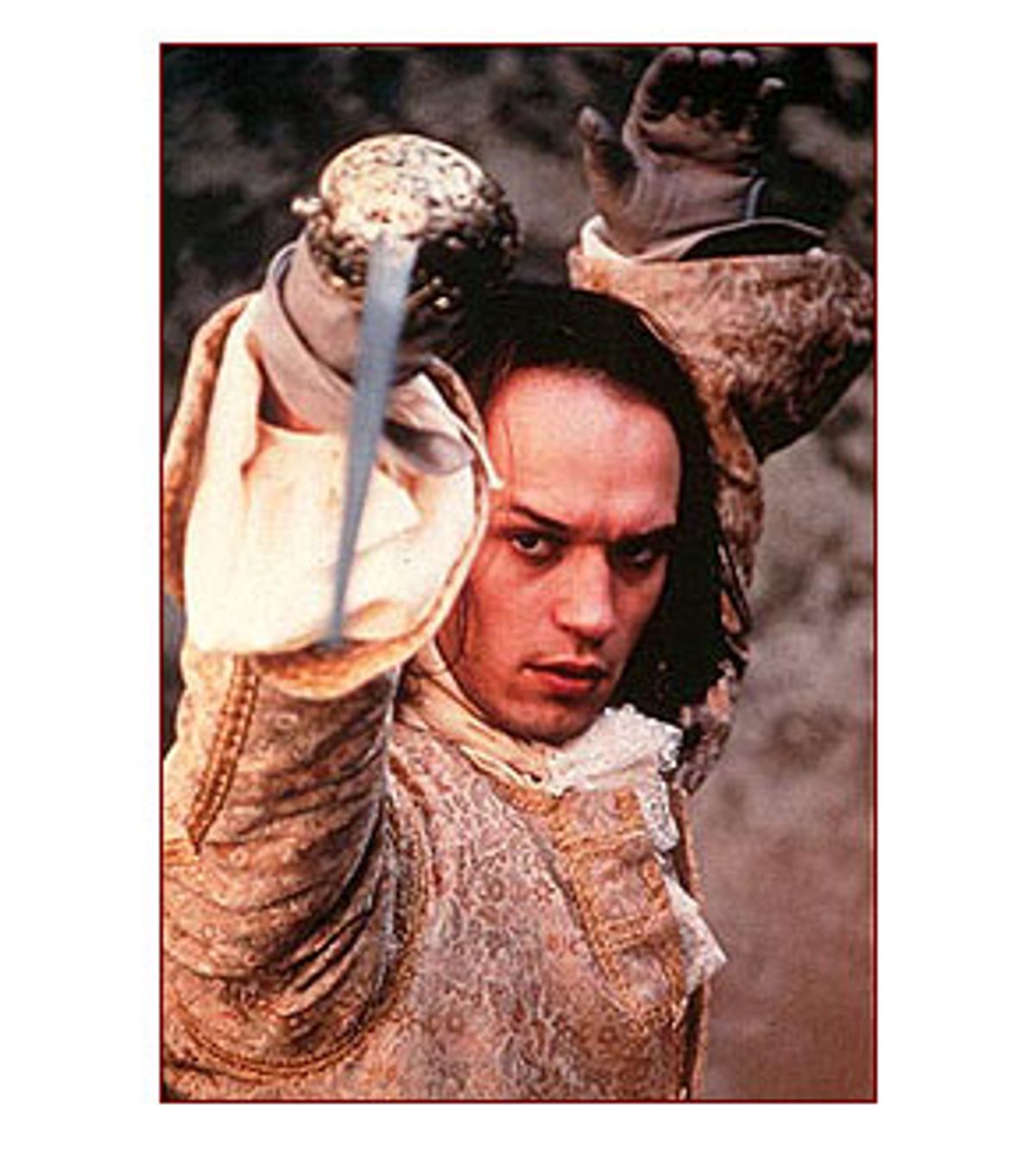 Arriving here with little advance publicity five years after it was made, Philippe de Broca's "On Guard" turns out to be one of the screen's great swashbucklers. For sheer entertainment it puts nearly everything else that's playing to shame. De Broca's film is a delight from top to bottom, packed with romance, adventure, beautifully executed swordplay and a sumptuous period look (it was shot by Jean-François Robin) that's so plummy you feel as if you're being pampered just by sitting in your seat.

In a way, you can see why it took five years for the film to secure an American release. From the velvety red background of the credits through to the finale, "On Guard" is a charming anachronism. It feels more like a rediscovery of some luxe production from the '50s than a contemporary film. De Broca (probably best known here for the '60s cult hit "King of Hearts," though it's far from his best work) apparently didn't waste any time worrying about how to tackle a swashbuckler in this day and age. He just leaps right in, confident in his material, not worrying about whether the movie might seem old-fashioned. That it does may keep it from having a sense of urgency. It does nothing to detract from its pleasure.

"On Guard" harks back to the self-mocking derring-do that was present in Douglas Fairbanks silents and later in Errol Flynn movies. That spirit has surfaced occasionally since, in the '50s with "Scaramouche" and the delightful, too-little-seen "Crimson Pirate." And against all odds it was visible again a few years back in the wonderful "Mask of Zorro." (And maybe it surfaced, in a different spirit, in the Sean Connery Bonds, and in the movies of Bruce Lee and especially Jackie Chan, who, like Donald O'Connor in the "Make 'Em Laugh" number from "Singin' in the Rain," is one of the movies' great acrobatic clowns.)

The spirit of self-mockery, which is not the same thing as self-parody, hangs over these movies, as it does over "On Guard." The feats of the swashbuckling heroes are presented as both thrilling and funny at the same time. When heroes and villains are engaged in a duel to the death while stepping neatly over a baby that's been laid on the ground among them, we're meant to gasp and laugh simultaneously. It should be said that if Hollywood perfected that spirit, it did not invent it.

It's right there in the sources for these films, the novels of Alexandre Dumas, and even in later imitators like Rafael Sabatini (the author of "Scaramouche" who, for that book, came up with perhaps the most delightful and absurd first line of any novel: "He was born with the gift of laughter and a sense that the world was mad"). When you read "The Three Musketeers" as an adult, either for the first time or for the first time since childhood, you may be surprised to find how funny it is. Dumas took such delight in the complications of his narrative that he even titled one chapter "The Plot Thickens." The humor doesn't put the kibosh on the romance or the adventure. Rather it sweeps us up into the high spirits of the whole florid enterprise.

The source of "On Guard" is "Le Bossu" ("The Hunchback," also the film's French title), a novel by Paul Féval, one of Dumas' contemporaries. (As far as I have been able to ascertain, Féval's novels do not presently exist in English translation.) There have been five film versions of "Le Bossu," Féval's most popular work, in France. I can't imagine that any of them surpasses de Broca's for sheer, audience-pleasing joy.

Set during the Regency, when Philippe d'Orléans succeeded to the throne in place of the then 5-year-old Louis XV, "On Guard," as so many swashbucklers do, takes as its hero a foundling. Lagardère (Daniel Auteuil) is raised by two fencing masters and, flush with his prowess at swordsmanship, is eager to duel the Duke of Nevers (Vincent Perez). He instead gets a job accompanying Nevers on the duke's journey to wed Blanche de Caylus (Claire Nebout), the mother of his child. An assassination plot hangs over the duke's head, hatched by his evil cousin Gonzague (Fabrice Luchini, as oleaginous a weakling as ever hissed his way through a swashbuckler). Disaster ensues and Lagardère escapes with Nevers' infant daughter, Aurore. At this point, the film leaps forward 16 years. Lagardère and Aurore (the comely Marie Gillain) have spent the years in a traveling circus, Blanche has taken to her widow's weeds in Paris, and Gonzague is consolidating his power.

If that sounds more like jacket copy than plot description it's because I want to suggest the romantic sweep of the plot while being sketchy about the details. A large part of the pleasure of any story like "On Guard" is our discovery of the complications and reversals of the plot. De Broca's direction is a wonderful feat of storytelling. He keeps us hanging on every twist and also, perhaps, amused at our own willingness to be caught up in this romantic confection. (And occasionally shocked. The image of dripping candle wax turning a corpse's face into a death mask has a near-mythic power.) De Broca's refusal to apologize for the old-fashioned aspect of his tale may be why the movie never feels stale. He's like a cook who realizes that a recipe may be familiar but that each preparation can be delicious if it's done with care.

Everyone in the cast seems to have been swept up into the movie's infectious spirit, even Philippe Noiret (as the Regent d'Orléans), who usually sits on the screen like a bad case of indigestion. As Nevers, Vincent Perez, whose previous screen appearances have largely consisted of hollow-cheeked preening, shows an unexpected flair for comedy. He's dashing and sexy in that slightly pleased-with-himself manner that always made Errol Flynn so funny.

And Daniel Auteuil is simply wonderful. Is there anything he can't do? From the variety of roles Auteuil has had in the past few years -- the office worker playing gay in "The Closet"; the down-on-his-luck knife thrower in "Girl on the Bridge"; the French military commander under the sexual spell of his wife in "The Widow of St. Pierre"; the man coming to terms with the divisions that have riven his family in "My Favorite Season"; and the detective uncovering a child sex-slave ring in Chris Menges' "The Lost Son" (never released here but available on DVD, it's one of the best unseen movies in recent years) -- his range seems to be as wide as that of almost any actor now working in the movies.

The glory of his role in "On Guard" is that it's basically a showcase for that range. Auteuil's compact build and the precision he has always brought to his physical movements make him particularly suited to the elegant brio of fencing scenes. And his imitation of a hunchback to get close to Gonzague in the film's last act provides him with a great opportunity for clowning. Auteuil puts on a raspy voice; he walks through scenes stooped over and rolling his eyes so that you might almost believe you're looking at Groucho's French ancestor.

In his scenes with Gillain as the grown Aurore, Auteuil has a way of shifting into a mode of fatherly propriety that's both touching and silly. (The development of their relationship may arouse another kind of propriety; but bravo to de Broca for not sacrificing the romantic flavor of his story to the squeamishness of contemporary sensibilities.) Auteuil gives a great comic performance here and he does something else: He makes Lagardère one of those screen heroes who feel close to us instead of one we regard from an admiring distance.

You don't make a movie like "On Guard" without real love for your material and without real conviction in it. The tendency now is to assume that a glaze of irony is needed before audiences will buy something this old-fashioned. But parody was always a part of swashbucklers, and de Broca's sure grip on the tone of this tale allows us to believe in it emotionally even as we are amused by the far-fetched adventure-story conventions. It's a completely satisfying picture (and I can't remember the last time I was in a screening room where the assembled critics broke into applause when a movie ended). What I'm saying is that de Broca honors our collective moviegoing past in a way that Hollywood appears to have forgotten how to do. "On Guard" is a piece of ornate costume jewelry proffered with love. And like any gift given with love, it may assume more of a place in your affections than the most precious gem.