The tax cut, judiciary nominations, environmental policy and defense strategy could all come down to a Senate race in the fifth-smallest state in the union. 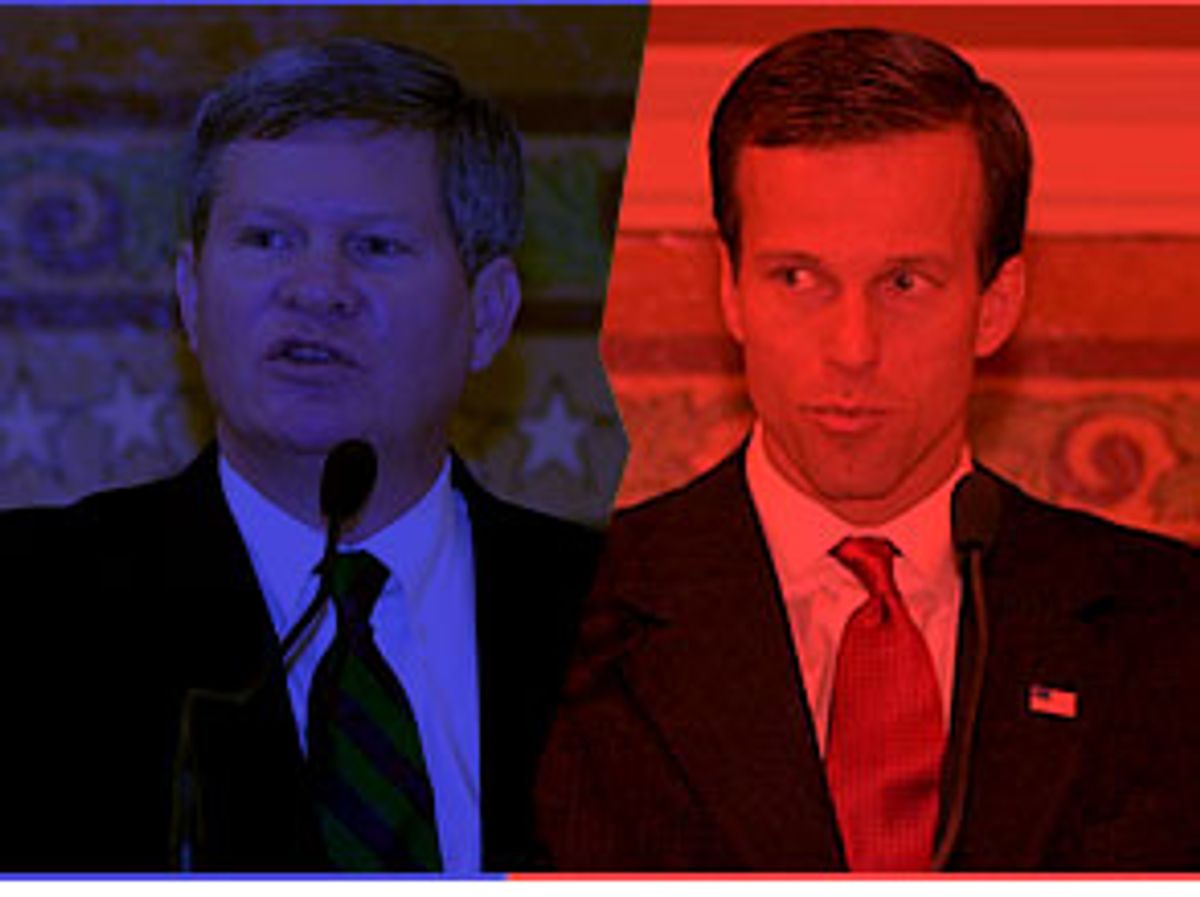 How much is at stake in the dead-heat Senate contest in South Dakota? With the Democrats' one-seat Senate majority their only weapon against the Republican-run White House and House of Representatives, this one race, in a farm-belt state with a population half the size of Phoenix, could determine the future of the federal judiciary, defense spending, environmental policy and President Bush's $1 trillion tax cut.

It is also a face-off of major proportions: Bush, a frequent and popular visitor, versus the favorite son, Senate majority leader and possible 2004 presidential candidate Tom Daschle. Not surprisingly, the two topics defining this race are the same ones that both those men are obsessed with: Bush's aggressive stance against Iraq, and Daschle's focus on the faltering economy.

Which makes the race particularly odd is that it pits two candidates -- Sen. Tim Johnson, the Democrat, and Rep. John Thune, the Republican -- whose positions on those key issues are strikingly similar.

Johnson, a one-term Senate incumbent, voted for the use of force in Iraq. So did Thune, the state's only member of the House. Johnson voted for President Bush's tax cut; so did Thune. Johnson supported a multibillion-dollar farm bill to help struggling South Dakota ranchers and farmers who have been hit hard by drought; so did Thune. But by the time Election Day has come and gone, close to $20 million will have been spent by supporters of the two, trying to highlight their differences.

Thune is trying to focus voters on the war in Iraq and concerns of national security; Johnson is pointing voters toward the sluggish economy, appealing directly to ranchers hit hard by the state's crippling drought. And neither wants to be seen as anything but an earnest politician with middle-of-the-road ideals.

For Johnson, that has meant avoiding charges that he might be some kind of liberal. While the National Journal calls Johnson's voting record "mostly liberal," Johnson's campaign spokesman, Dan Pfeiffer, paints him as a moderate voice in the Senate, comparing him with conservative Democrat Zell Miller of Georgia, whose siding with the Bush administration frequently infuriates his Senate colleagues. "When the White House goes looking for Democrats on a vote, they go probably first to Zell Miller and then to Tim Johnson," Pfeiffer says.

And previously high marks from liberal groups have been falling. The League of Conservation Voters, for example, gave Johnson a healthy 88 percent on their 1998 scorecard. Last year, that score fell to a barely passing 63 percent. (That's still higher than the big fat zero Thune received from the group, which caused the LCV, along with the Sierra Club, to launch televised issue ads attacking Thune's environmental record.) But Johnson's campaign has persisted in trying to keep some distance from the enviros; Pfeiffer made a point of referring to Johnson's "less than stellar Sierra Club rating" and specified that the campaign had not sought an endorsement from the group. (Which it got anyway.)

And while Johnson has a mixed record when it comes to supporting labor unions, organized labor is expected to wage an aggressive get-out-the-vote campaign in the state on Election Day. If Johnson has tried to downplay his political support on the left, Thune has tried to reach beyond his strong support from the right. His initial rise in state politics, as an underdog candidate for the House in 1996, was buoyed by support from religious conservatives in the state, and Thune's voting record in the House reflects that support. He has cast votes in support of school prayer and the posting of the Ten Commandments in government buildings, helping him receive a 92 percent score from the Christian Coalition.

But on one of the most important issues to South Dakotans, Thune has clashed with his conservative colleagues. While Republicans from Bush on down have limited drought relief to the state's stricken farmers and ranchers in an effort to curb government spending, Thune has fought hard to get them assistance. His campaign points to $750 million in government money that Thune helped secure -- only a small portion of which will actually go to South Dakota. In August, Bush came to the state and told ranchers they would have to endure the drought without assistance as the federal government dealt with rising deficits and big spikes in military spending.

As a result, Thune's campaign has sought to change the subject. When asked what the campaign's central issues were, Thune spokeswoman Christine Iverson said, "national security and tax relief." Thune's campaign is not shy about using the current focus on Iraq to shine a spotlight on Johnson's history, namely his vote against the Gulf War in 1991. "It's something that is driving the debate right now," Iverson says. "I think it makes Johnson's actions back in 1991 more relevant."

That focus has led to one of the most controversial ads of the 2002 campaign season. In a Thune spot, Saddam Hussein made his first campaign appearance. That ad, which criticized Johnson's record on defense and ran in the Western, more conservative part of the state, features an image of Saddam and al-Qaida fighters.

Johnson called the ad "intensely over-the-top negative" and tried to deflect the criticism by pointing out that his son, Brooks, is likely to see combat in the Gulf should U.S. troops be called on to invade Iraq.

Geographically and politically, South Dakota is practically two separate states, separated by the Missouri River. To the west are the cattle-ranching lands of the Black Hills, whose politics resemble the arch-conservative rural politics of many other Western states. This is the South Dakota known to history buffs and tourists alike, from the grand, gaudy monument at Mount Rushmore to the desolate landscapes of the Black Hills, to Wounded Knee, the site of the Oglala Sioux massacre in 1890.

East of the river are the state's vast corn, wheat and soybean farms and the state's largest city, Sioux Falls, home to one-sixth of the entire state's population. The mixture of urban sensibility and Midwestern populism makes East River, as it is known, the Democratic bastion of this increasingly conservative state.

While South Dakotans regularly give Daschle more than 60 percent of the vote, it gave George Bush a similar stamp of approval in 2000, putting him ahead of Al Gore by 22 points.

Which would seem to make running against Bush a dangerous proposition. But Johnson's campaign has tried to paint the president as a kind of outside agitator, first persuading Thune to drop his bid for the governor's office (which appeared his for the taking) in order to face off against Johnson. Johnson operatives riff on the meeting between the Thune and Bush families at the White House, when "they ate chocolate truffles and convinced John to run for the Senate," in Pfeiffer's words. The "truffles," a flourish repeated by a number of South Dakota Democrats, is no doubt meant to imply Thune was somehow seduced by Beltway bonbons instead of what's best for South Dakota. "John Thune is running for his party, not for his state," Pfeiffer says.

But talking down Bush has become increasingly difficult as this race has worn on. "This summer, we certainly were running on their issues," says Thune spokeswoman Iverson. "It was corporate accountability, prescription drugs, Social Security. But since that time, it has definitely switched to an issue terrain which is much more favorable to John Thune. The two issues which are the wild-card issues are the war and the economy, and I think it's debatable which issues will be highest on voters' minds when they walk into the ballot box."

But Pfeiffer says, "Any spin that the drought is somehow just a summer issue is wishful thinking on the part of the Thune campaign. Farmers and ranchers in South Dakota are still hurting."

Perhaps, but that's not immediately apparent in the polls. Johnson seems to have rebounded from his summer slump, when he trailed Thune by as much as 9 points in statewide polls after campaigning on the economy and the drought. Most polls now have Johnson with a slight lead, but within the margin of error. While Thune may have lost some ground, there is certainly good news for his campaign as well. Historically, incumbents who poll less than 50 percent of the vote within a month of the election rarely, if ever, win on Election Day. In all the statewide polls, Johnson is well below the magic 50 percent figure.

In the next few weeks, both Bush and Daschle will make appearances to drum up those few extra percentage points that could make all the difference.

"At the end of the day, this race could come down to 5,000 votes," Iverson says. "An enormous amount of time and energy will be spent trying to influence 5,000 people."