Fed up with their state's draconian laws, New York voters have suddenly made long-shot independent Tom Golisano a force in the governor's race. 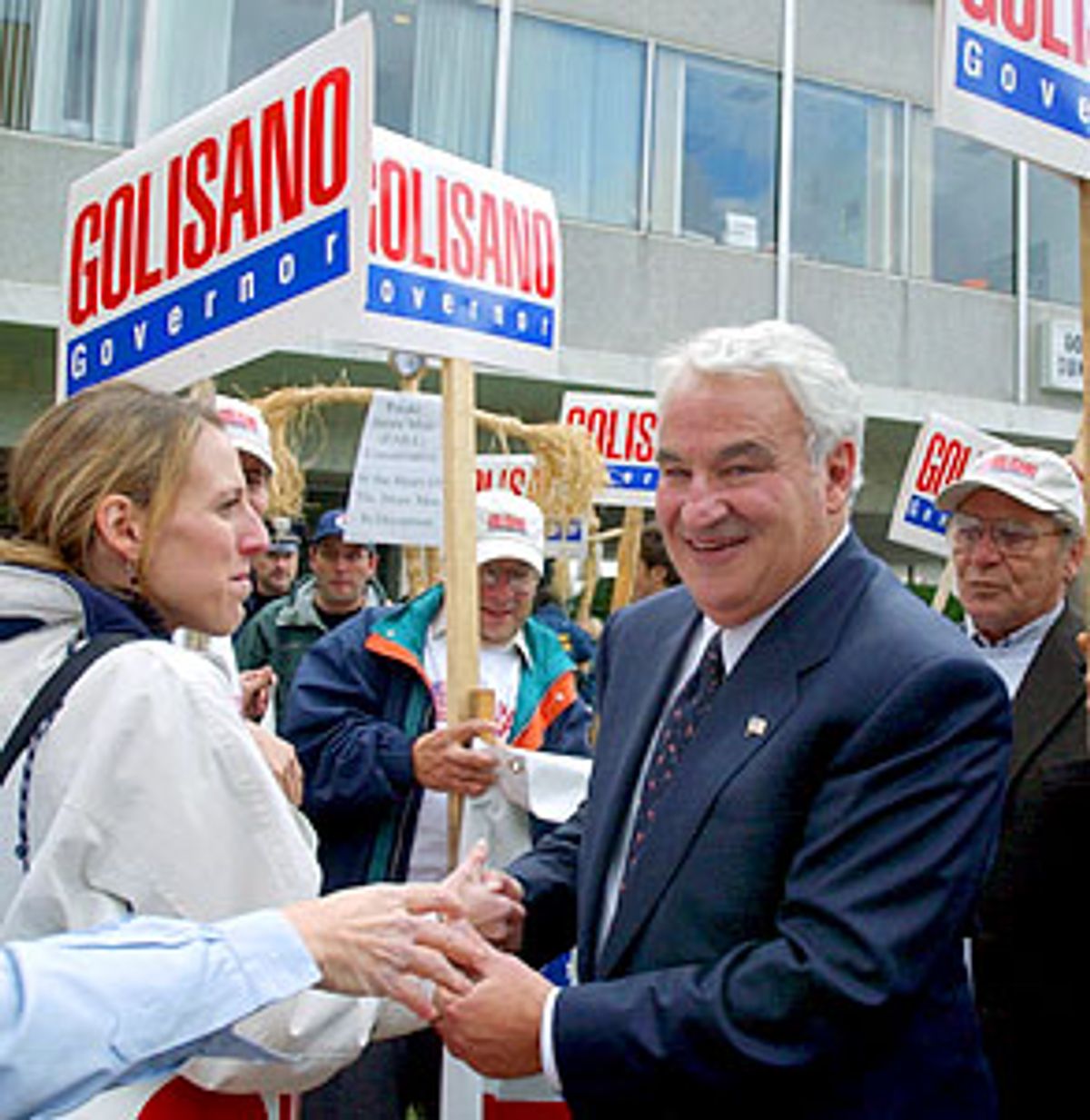 For the last five years, comedian-turned-drug reform crusader Randy Credico has poured every drop of his considerable energy into Mothers of the Disappeared, a group of prisoners' relatives dedicated to changing the state's draconian Rockefeller drug laws. But despite meetings with Gov. George Pataki, Democratic challenger Carl McCall and Assembly Speaker Sheldon Silver, all of whom pledged their commitment to drug law reform, the Mothers were getting nowhere.

Stalled, the issue started falling off the radar. "I thought we were dead," Credico says. But the activists have been resurrected -- and are shaking up the New York governor's race in the process.

In the last two weeks, the billionaire libertarian conservative candidate Tom Golisano, who is running on the Independence ticket, has thrown his support -- and his cash -- behind Rockefeller repeal, not just reform, something few Democrats have dared do for fear of seeming soft on crime. His anti-Rockefeller TV ads are ubiquitous in New York markets. And longtime leftist Credico is working side-by-side with Golisano strategist Roger Stone, a right-wing pit bull and Reagan campaign veteran. They share a message: "Even people who are conservatives recognize that these laws are ineffective and expensive, not to mention being racist and unfair," Stone says.

It's an odd pairing considering that Golisano initially set out to challenge Pataki from the right, bashing the governor for becoming a "liberal." He's promised tax cuts, opposes gun control and supports a ban on so-called partial-birth abortions.

But Golisano is also something of a libertarian, which explains why he agrees with Credico about New York's controversial Rockefeller laws. Under the statutes, anyone convicted of selling 2 ounces or possessing 4 ounces of cocaine or heroin, an A-1 felony, gets 15 years to life in prison. People convicted of possessing half an ounce of narcotics, or of any sale at all, can get up to 25 years in prison.

Both Pataki's bill and the Assembly bill would reduce these. But the Mothers of the Disappeared want to scrap them entirely, handing all sentencing authority back to judges, who would then weigh the factors in a case -- including variables such as lack of a criminal record -- before deciding on punishment.

Golisano agrees with them, and he's spending millions to blanket the airwaves with the message that the Rockefeller laws are cruel and counterproductive. In one advertisement airing frequently on Spanish-language stations Univision and Telemundo, Hilda Garcia says she blames Pataki for the death of her husband, Eduardo, who at age 60 was sentenced to prison for acting as a lookout during a drug deal. Eduardo Garcia had a heart condition. Denied clemency, he died in a unit for the physically disabled at age 68. The ad features pictures of their life together and shots of a forlorn old man behind bars.

In another ad running on UPN and the WB, Anthony Papa, who served 12 years for delivering an envelope of cocaine 16 years ago, says, "When I was a young man I made a mistake. It was the only time I ever got in trouble with the law. Twelve years in a 6-by-9-foot cage. These laws waste money, destroy lives and break up families. Gov. Pataki's plan to change these laws is not true reform and he knows it ... Tom Golisano's plan is true reform."

Golisano is sponsoring an equal number of ads calling for the implementation of medical marijuana laws. And on Monday, he launched a new commercial attacking Pataki for his connection to a long-festering scandal in which his administration was accused of trading parole for campaign contributions -- something that particularly enrages Credico, given the governor's refusal to free some nonviolent Rockefeller convicts like Garcia.

Anti-Rockefeller activists don't see Golisano as a spoiler or a tool -- they've become passionate advocates for him. "Let's go for broke and go for Golisano," says Papa. "We can't do any worse because Gov. Pataki and Sheldon Silver are not compromising. What's left? We've got to go with the outside shot to try to win the election."

It's no wonder Papa is so enthusiastic -- Golisano's campaign is offering a critique of the prison-industrial complex that wouldn't be out of place in the pages of Z Magazine. "Pataki has been talking about [Rockefeller reform] for two years and has never done it," says Stone. "Obviously he couldn't swing the right wing of his own party in the state Senate. All of these prisons that Mario Cuomo built upstate are in the districts of Republican state senators who have prison guards as constituents. It's a patronage issue for a lot of senators -- let's keep black and Puerto Rican people locked up because it keeps jobs for our district."

This newfound zeal for drug-law reform isn't just providing the Mothers with more exposure than they'd ever dreamed of; it's giving Golisano a big bounce. Suddenly, he's a long-shot candidate instead of an impossibility. According to an Oct. 17 SurveyUSA poll, Golisano's support was at 22 percent -- his highest ever. That's still much less than Pataki's 46 percent, but it's closing rapidly on McCall's 29 percent. And Stone is quick to point out that his candidate is polling a couple of points higher than Jesse Ventura was a few weeks before he won the Minnesota governorship.

"Pataki's got no forward momentum," Stone says. "There's only one way for him and that's down."

But Golisano seems to be pulling votes away from both Pataki and McCall. "McCall's voters are looser," says Stone. "They're clearly falling off because of his own lack of resources. But to the extent that Pataki was winning any Latin, black or Democratic votes, and he was, we're also starting to pick up some of those." Since Golisano started his anti-Rockefeller campaign two weeks ago, his Hispanic support has shot from 6 percent to 35 percent, according to the SurveyUSA poll. Neither Pataki's nor McCall's campaign returned calls for comment.

Jamin Raskin, an American University law professor who represented both Ross Perot and Ralph Nader in their legal challenges in trying to join the presidential debates, believes Golisano's got a real shot. "It's definitely within the realm of possibility," he says. "Golisano has the money to spend to get his message out. There's a lot of fluidity in public opinion these days. All of the studies show growing receptivity to candidates outside the two-party system."

Raskin believes there's a "coming libertarian upsurge in American politics," something that's reflected in widespread disenchantment with the war on drugs. "For people who step outside the two-party system, there are enormous political gains to be won by challenging drug war orthodoxy," he says.

Even if Golisano loses -- and the likelihood still is that he will -- he'll have done much to prove that taking on the drug laws can be a winning issue. "In a certain sense, it's like Nixon going to China," says Stone. "The most conservative candidate in the race just came out and said these laws are ridiculous, ineffective, unfair and expensive. At this point, even if Tom Golisano does not get elected, [his campaign] will provide the impetus to change these laws. It gives cover to a lot of others."

Raskin points out the parallels with Perot. "Looking back to Perot's '92 race, he pushed the budget deficit as a central issue, and though he lost, reduction of the budget deficit became a central plank of Clinton's first term as he worked to win over independent-minded Perot voters."

"If Golisano loses, if nothing else he has injected the drug issue into public discourse in a very dramatic way," Raskin continues. "It's definitely going to have its impact on public policy. It might take two years or five years, but we are definitely going to see it."