Samuel L. Jackson looks great in cornrows and a kilt, but that's all this feeble Anglo-actioner has to offer. 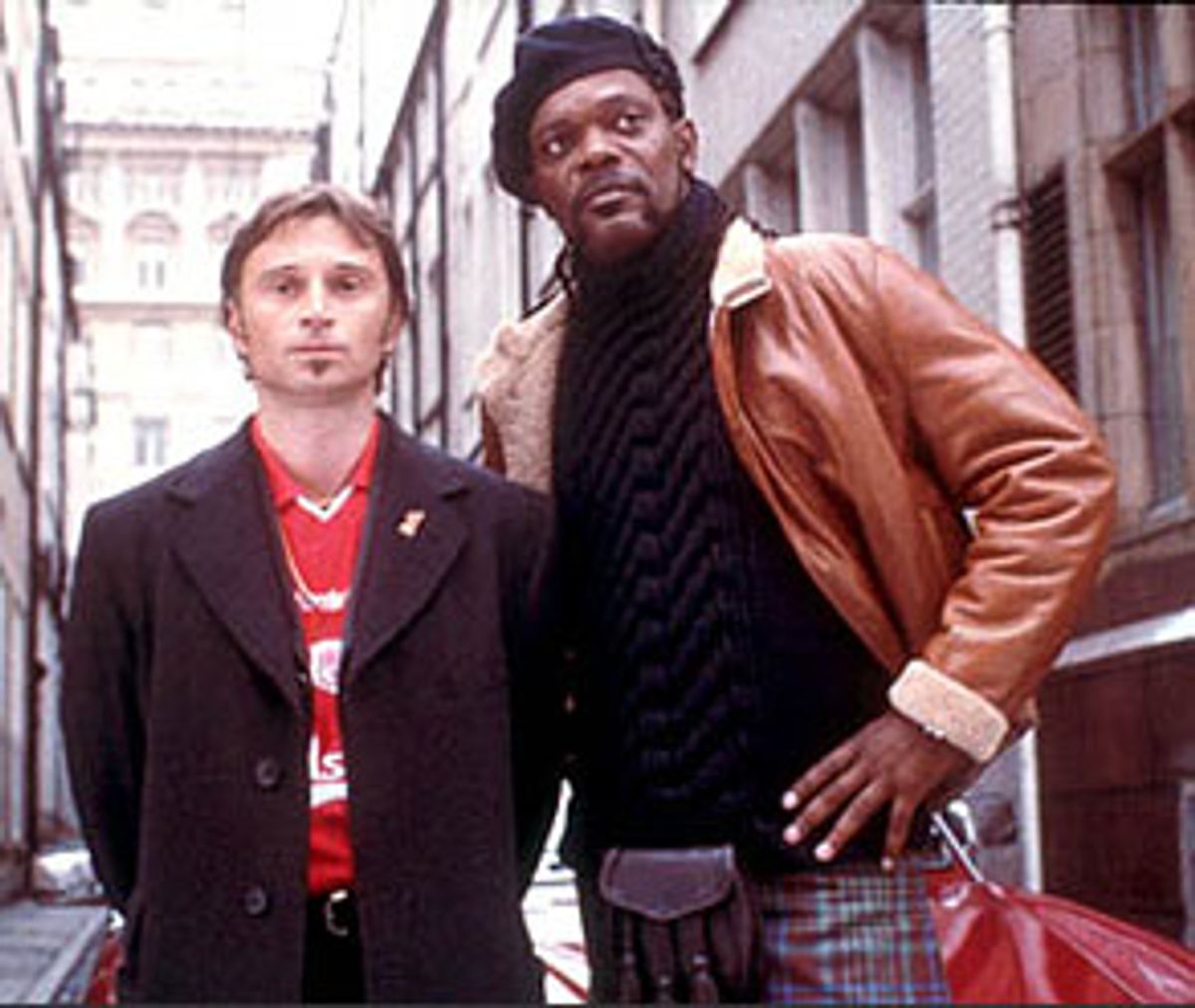 "You know what they call a Quarter Pounder with Cheese in Paris?"

"They don't call it a Quarter Pounder with Cheese?"

"No, man, they got the metric system. They wouldn't know what the fuck a Quarter Pounder is."

"What did they do to this fish? Batter it to death?"

Say whatever you want about Quentin Tarantino -- that he ripped off too much stuff, that he's shaky on race -- but at least the guy watches movies. He borrows structures from cool Hong Kong filmmakers, actors from obscure blaxploitation flicks, and tracking shots from Scorsese. Tarantino's the filmmaker of the nod.

Director Ronny Yu is a winker. Wanker. Whatever. His new film, "Formula 51," is supposed to be one of those stylish cool-guy flicks with a hip soundtrack and a memorable rogues' gallery of character actors. Yet after suffering through its rotten dialogue and conventional, absurdly unbelievable plot, I wished "Formula 51" was a lot more like a Tarantino movie. Unfortunately, it's more like Guy Ritchie-lite -- "Lock, Stock and Two Smoking Barrels" without the laddish energy. And while there are a couple of good reasons to want to be Mr. Madonna, his filmmaking credits are neither of them.

Samuel L. Jackson plays Elmo McElroy, a master pharmacist in the service of the Lizard (a prosthetically scabby Meat Loaf -- or Mr. Loaf, as the New York Times would say). McElroy's crowning achievement is a batch of blue pills that the Lizard hopes will revolutionize the recreational drug market. "It's like a personal visit from God," says McElroy of this particular drug experience. I thought it looked more like Gleemonex, from the Kids in the Hall movie "Brain Candy."

On the day McElroy is supposed to unveil the new party panacea, he decides to burn his boss and take the formula. For a reason that we won't learn to the final credits -- and won't necessarily understand anyway -- we next see him in a kilt with a bag of golf clubs. His plan is to sell his goodies to a sleazy English goon who we're supposed to believe is competent enough to run a drug ring that can drop $20 million on an unproven product. In a ridiculous scene that includes a conference table shaped like a coffin, a warehouse full of plastic dolls, and a major explosion, the Lizard survives McElroy's betrayal and sets off the first wave of goons who want to nab the goods, kill the chemist, or both.

Included in that batch is a sexy sniper (Emily Mortimer) who's deeply in debt to the Lizard. (It would have been nice if the character of a sniper had been enough to delay the release of this movie -- as has happened with Joel Schumacher's "Phone Booth" -- but the fact that the movie's so bad would have provided an even better reason.) She reluctantly follows McElroy from Vegas to England. He manages to lose her at customs, Britain being the kind of country where a large black man with a bag of golf clubs walks through customs unhassled while officials stop a slight white woman because her papers might be out of order.

Jackson is almost always fun to watch, and he does somehow manage to keep the movie from utterly collapsing. At times his presence is weirdly disarming. He'll say some unforgivable line like, "I atomized a major drug syndicate to be here," and you'll be thinking, "Damn, he looks good in cornrows. Now, what was the last movie where he had chop sideburns like that?"

Not nearly as fun to watch is Robert Carlyle (the fine Scottish actor familiar from roles in "The Full Monty," "Trainspotting," "Riff-Raff" and lots of other British movies), playing a small-time hooligan who, get this, loves soccer -- it being England. Carlyle comes in first as McElroy's driver and later as his partner. I suppose he's supposed to be half of an unlikely pair of buddies, but aren't they all unlikely in buddy movies?

McElroy eventually sets up a deal with a competing dealer, a bug-eyed, quasi-mystic character played by Rhys Ifans. He's a drug enthusiast and nightclub owner who allows Jackson a grandstanding Johnny Applespeed speech in front of a roomful of bleary ravers. At first, I liked the film's attitude on drugs: that people are going to get high, that they want new ways to get high, and that this is perfectly normal. But as the movie progresses, it becomes clear that basically everyone in the movie is a towering idiot -- especially anyone connected to drugs, except, of course, McElroy.

In a final plot twist, we find out that McElroy actually has another product: hype. Consequently, the point of the film becomes that nothing really matters except for posturing and buzz, which if you think about it, is pretty depressing.

Carlyle and Jackson romp through the movie without anything like a decent action scene, despite the car wrecks, skinhead fights and sadistic cops. Director Yu seems far more interested in gross-out humor than in showing us well-thought stunts or a car chase that we haven't seen 10,000 times. If explosive defecation is your idea of a laff riot, this picture -- and the Headrillaz soundtrack, by extension -- should be perfect fun.