Sharing the dugout and lots of affection with their sons, the Giants telegraphed good news about fatherhood -- and manhood -- in 2002. 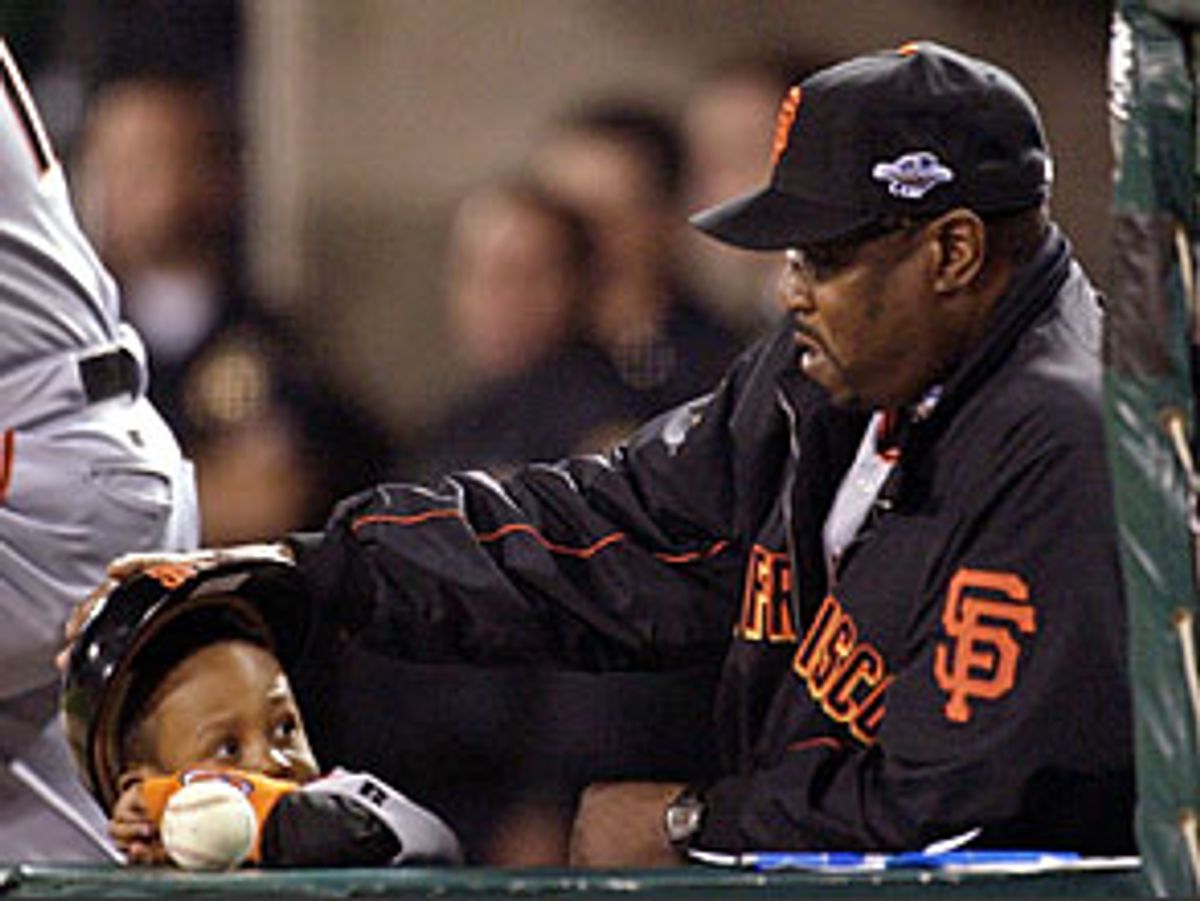 It's still too soon after the San Francisco Giants' crushing World Series loss to take comfort in much of anything. But someday soon I'll be able to enjoy the fact that the Series' indelible image of heroism belongs not to the victorious Anaheim Angels but to a player on the losing team: J.T. Snow, the brave Giant in the bright white uniform who swept 3-year-old batboy Darren Baker out of harm's way at home plate in Game 5.

I got sick of watching the endless replays over the weekend, because 1) it seemed part of Fox TV's crusade to make its broadcasts about blondes wearing halos, and rally monkeys, and celebrities in the stands -- anything but baseball -- and 2) some of the coverage on some stations was censorious, with voiceovers harrumphing that there oughta be a law against that sorta thing, and if you know Major League Baseball, there probably will be.

Of course Bud Selig and company know how to draw exactly the wrong conclusion from everything. Thanks to the near accident involving manager Dusty Baker's son, baseball officials announced Monday that they'll start enforcing the two-batboy limit, which the Giants ignore, and they may impose a new age limit. (Note to Selig: If you ban little batboys, can you also ban ThunderStix, which moronic Angels fans used to batter Reggie Sanders when he was chasing down a ball in right field Sunday night? No, Sanders wasn't hurt, but Darren Baker wasn't either, and as long as you're cracking down on possible dangers, why not ban something obnoxious as well as something adorable?)

But whatever baseball officials do next year, they can't take away those great images from this year: Darren Baker safe in Snow's arms, Shawon Dunston and Barry Bonds kissing their sons on the lips after home runs in Game 6, a crying Darren in his father's arms after the devastating Game 7 loss, the two Shawons in a nose-to-nose huddle of grief as the Angels danced on the field. The power of those images has less to tell us about baseball than about fatherhood in 2002, and about manhood, and the news is all good.

Certainly Barry Bonds wasn't kissing his dad Bobby Bonds, a Giants and New York Yankees slugger, after the elder Bonds hit his home runs in the 1960s and '70s. By all accounts Barry was pretty much raised by his mother, Pat, with Bobby, in the role of absentee dad, on the road more than half of every year and distracted even when he was around. Yet somehow Barry -- the media's designated asshole, supposedly focused on nothing but his own game -- grew up to be the sort of father who'll pal around with his son in the clubhouse and celebrate his prodigious home runs by grabbing the little guy's head and kissing him on national television. Sportswriters may not consider him a role model for how to deal with the media, but he's setting a great example as a dad. He shows his 12-year-old son Nikolai genuine tenderness, even though the boy has reached an age when many dads withdraw what little physical affection they gave their sons when they were smaller, as if to teach the lesson that detachment is crucial to masculinity and affection is for sissies.

Barry isn't alone: All these Giant fathers hug and kiss and hold their boys. Benito Santiago's son is almost as tall as he is, but he gets a kiss and a hug when he greets his dad at home plate after a home run, too. All these boys are there in the dugout learning how to be men -- warriors, buddies and loving dads too. J.T. Snow was matter-of-fact when asked how he had the presence of mind to scoop up Darren Baker while he was scoring Thursday night. "I have a four-and-a-half-year-old," he said simply, implying that multitasking comes with the territory -- and it's not just for moms anymore.

Dusty Baker, a father for the second time at 50, wasn't proud that his son became a poster boy for toddler obliviousness when he wandered into the path of danger in Game 5. But Dusty was extremely proud of Darren's amazing composure when racing out to retrieve bats taller than himself. The child takes his job as batboy seriously. He wants to do it well. And Dusty didn't try to discourage Darren's tears Sunday night, either, didn't tell him boys don't cry. "He's like his dad. He doesn't like to lose," Baker told reporters. He was proud of that too.

Baker's own father didn't raise him quite this way. The two men are extremely close now, but they were fierce antagonists years ago. Johnnie B. Baker Sr. coached his son's Little League team and years later still likes to brag about benching him for various infractions. A few weeks ago I heard the elder Baker tell a radio interviewer that nowadays, folks would call the police for the way he disciplined his son when Dusty was a little boy -- implying there was corporal punishment involved -- and I didn't know whether to chuckle or cringe. And they disagreed over a momentous decision about Dusty's future: Whether he should go to college (his dad's choice) or take a signing bonus from the Atlanta Braves and play baseball (Dusty's pick.) When Dusty defied his dad and signed with the Braves, his father had the bonus placed in trust, and the younger Baker sued the elder to get it back. The two men didn't talk for years.

They're talking now. Baker and his dad are headed off on a trip together, to watch some college football and maybe do some fishing too -- some old-fashioned father-son bonding time. They're going to talk about the next momentous decision in Baker's life: Should he return to manage the Giants, despite years of tension between him and owner Peter Magowan? Nobody knows what Baker's going to decide, but most observers think he's already gone.

I'm not so sure. His father has made it clear he wants his son to stay in northern California, and the aging Baker, whose health isn't well, has a pull with his son that he didn't have when the rebel Dusty was growing up (although the senior Baker would never ask his son to swallow disrespect.) Another factor is that Sunday night, Magowan took Baker aside for a private talk after the game, and finally said to his manager some of what he should have told him months ago.

"I told him how proud I was of the team and the job he did," Magowan told reporters after the World Series defeat. Funny how loss made the owner able to do what he hadn't been able to manage in victory -- reach out to Baker man to man and admit they need each other.

There are all sorts of fascinating race, class and culture crosscurrents behind the Baker-Magowan clash, but there's also something simpler: two towering male egos. Magowan feels he and the Giants organization don't get enough credit for the team's success because the media lionizes Baker; Baker feels he doesn't get enough respect from Magowan and the front office; and they've both seemed willing to walk away from each other because they can't resolve that impasse.

I've been waiting for someone to come along and be like J.T. Snow, to sweep all of us out of the path of a disaster that seems to be barreling toward San Francisco: Baker's departure. But maybe the two men can handle it themselves. On Monday I started wondering if the Series loss might help Baker and Magowan get beyond their male egos and realize that the manly thing, in this case, involves being tender, not tough. Could the pain of losing make them do what they couldn't while winning was making them feel invincible, invulnerable: forgive each other?

It's probably too much to ask, even if the Giants have shown they can be role models when it comes to stereotype-busting enlightened male behavior all season long. I'm still hoping Baker listens to his dad this time around, and keeps Darren a Giants batboy, but I'm prepared for the news that neither father nor son will be in the Giants dugout next spring, whatever Bud Selig decides.